Rory Gaffney's first-half goal was cancelled out by Nathan Blissett, but a second-half strike from Billy Bodin was enough for Rovers to defeat Plymouth at the Mem.

Rory Gaffney's first-half goal put Rovers into a commanding position at the break, but a goal from former striker Nathan Blissett levelled the game just seven minutes into the second half.

Blissett's goal kept the scores level for just ten minutes, as Billy Bodin's eighth goal of the season restored Rovers lead and was enough for the home side to claim all three points.

Heading into the game, Rovers boss Darrell Clarke made two changes to the side that was defeated at Portsmouth on Tuesday evening, as Lee Brown and Rory Gaffney returned to the starting eleven.

On the bench, Stuart Sinclair was included amongst the substitutes, as the midfielder featured for the first time since Rovers' victory over Fleetwood over a month ago. 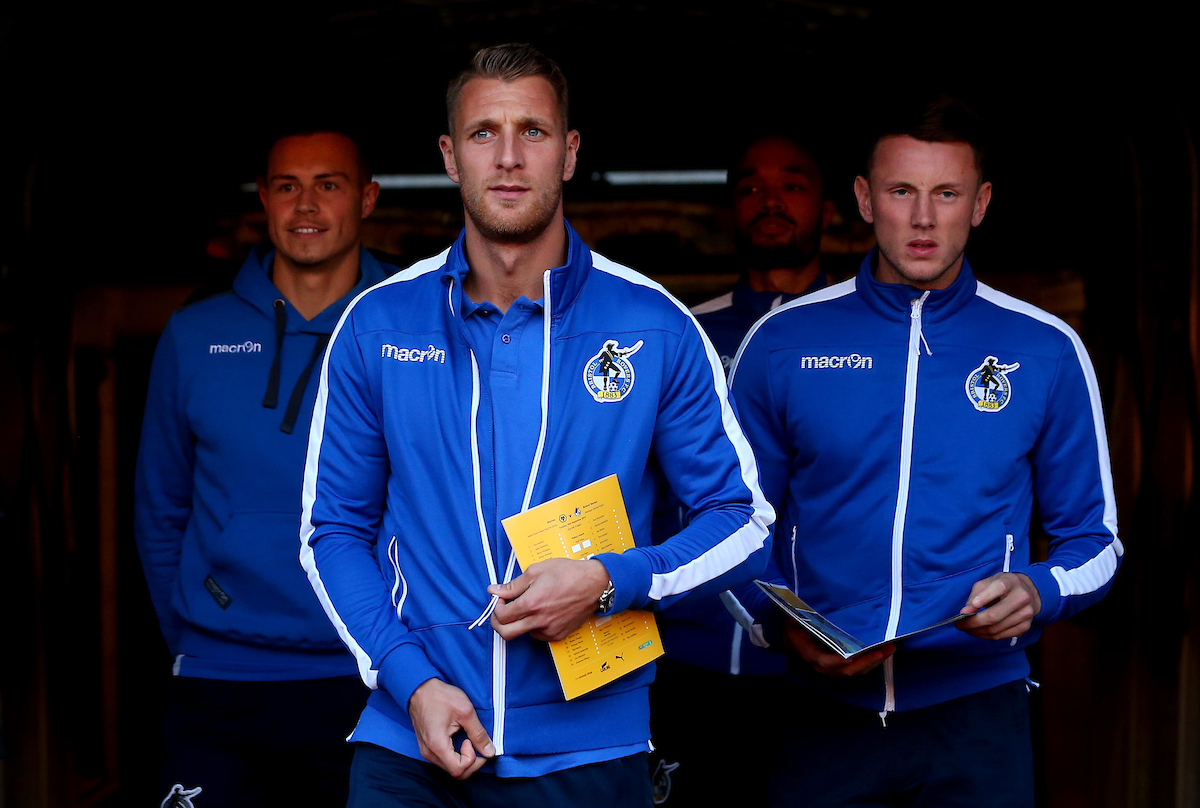 The visitors were without first-choice goalkeeper Luke McCormik and drafted in Kyle Letheren to fill in for the shot-stopper. Derek Adams was also able to call on Jake Jervis, as the striker returned from injury to be included in the starting line-up

During the opening exchanges, Rovers enjoyed the majority of possession, working the ball to the outer perimeters of the Plymouth area. A neat series of passes through the midfield allowed the Liam Sercombe to work a pass through to Lee Brown, as the left-back managed to break deep into the final third. After taking a touch to set himself, Brown whipped in a delivery across the face of goal that was spilt by 'keeper Kyle Letheren, who managed to spare his blushes by pouncing on the loose ball on his second attempt.

After pressing early on, the first shot on target came courtesy of Liam Sercombe. The midfielder received the ball outside the box and took a touch before launching a right footed shot on goal that had to be pushed around the post by Letheren, who was at full stretch diving to his left.

Rovers continued to create chances as the first-half progressed. A break from deep by Chris Lines opened up space, as the midfielder slotted a ball through to Ellis Harrison down the left. The striker advanced with the ball to the edge of the box, before driving a pass through to the far post, aimed at Rory Gaffney. The striker managed to latch onto Harrison's pass, but from a tight angle, Gaffney could only his effort into the side netting. 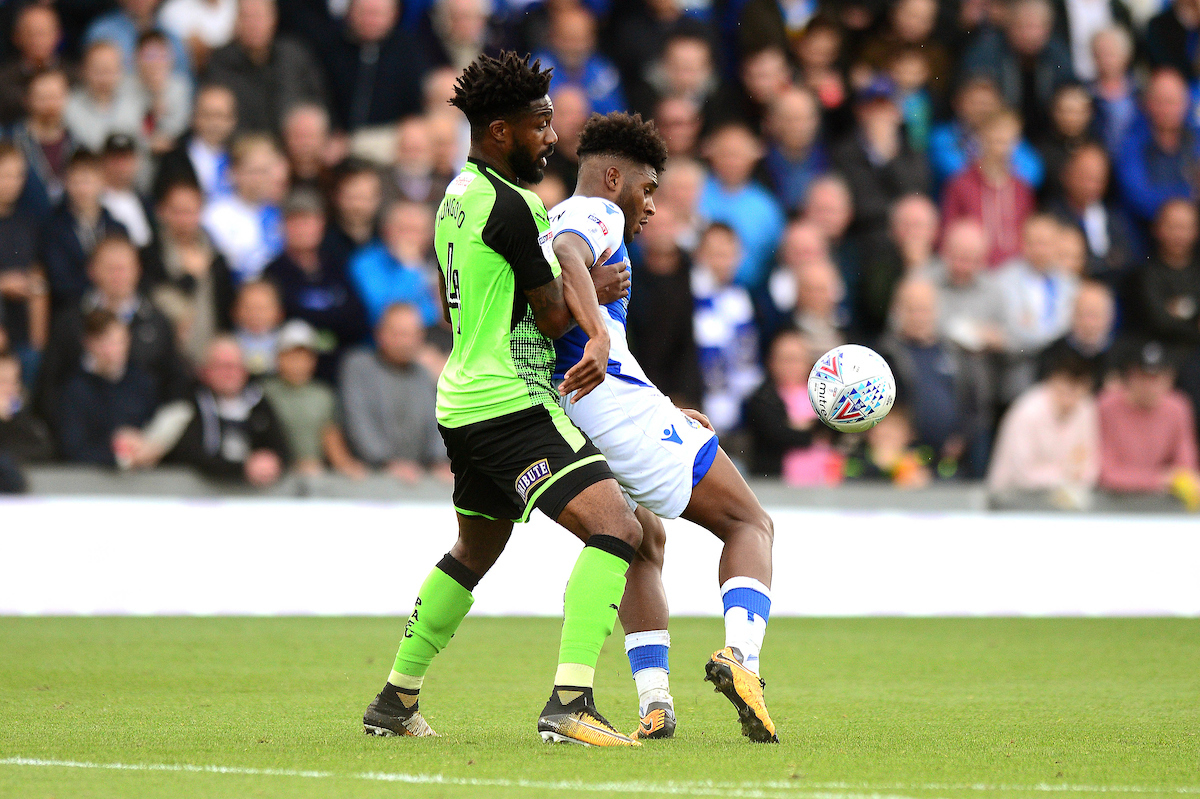 Gaffney quickly turned provider for Ellis, as the Irish forward dinked a cross to Harrison inside the area. Harrison managed to outjump the Plymouth defenders and direct a header towards goal, but a fine save for Letheren did just enough to prevent the header from gliding into the top corner.

It was the combination of the front two that created the first goal, with a fine move that stretched the visitors. Ellis managed to formulate a break down the right and was given space to deliver a low cross into the area. Harrison's cross wasn't dealt with by the Plymouth defence and the ball was allowed to reach Rory Gaffney, as the striker took a touch to take the defenders out of the equation before slotting home past Letheren with a powerful finish to put Rovers ahead. 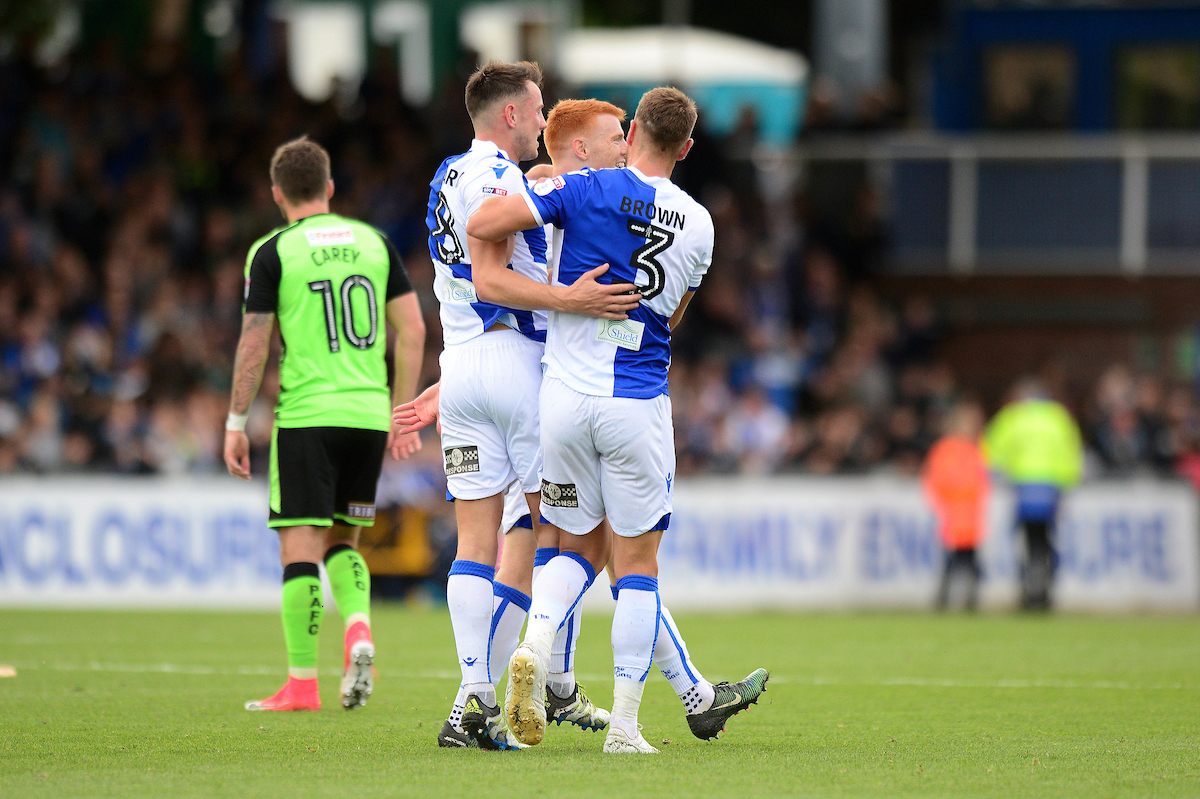 After scoring the first-goal, Rovers were still having the fair share of share of possession but were unable to convert that possession into chances. The hosts also had to be alert to the occasional threat from the visitors, as Graham Carey saw a long-range effort fly narrowly off-target.

Just before the break, a Chris Lines corner caused havoc inside the Plymouth area, as an inswinging delivery from the midfielder pinballed around the area. Eventually, the ball dropped to Ellis Harrison, who showed patience to wait for a clear path to goal, but when the striker attempted to shot low towards the target, his effort was deflected clear by a stray leg inside the penalty area.

Plymouth themselves had a late chance before the interval, as a deep cross into the Rovers penalty area was headed into a dangerous position by Nathan Blissett. The striker's header fell into the path of Antoni Sarcevic, who couldn't quite get the ball to drop, as a covering challenge from Tom Lockyer deflected the ball off the striker and behind for a goal kick as Rovers went into half-time ahead.

Early on in the second half there was scare for Rovers, as former player Nathan Blissett thought that he had done enough to level the scores in front of the travelling fans. Inside the area, the striker waited for a ball to fall to a comfortable height to volley and connected well with a sweetly struck right-footed effort. Just as it looked like Blissett's strike may creep into the far corner, an outstanding diving save from Sam Slocombe was enough to tip the attempt wide.

Immediately at the other end, Rovers looked to add to Gaffney's first-half strike, as Liam Sercombe recycled a loose ball outside the area and attempted a driven long-range shot that bounced narrowly past the post.

Plymouth managed to bring that game back level just seven minutes into the second half, as Blissett managed to take advantage of a slip from Tom Lockyer inside the Rovers area, as a cross from Graham Carey was only half cleared by the Rovers skipper. Blissett has on hand to take full advantage and provided a powerfully struck right-footed finish that veered into the top corner. 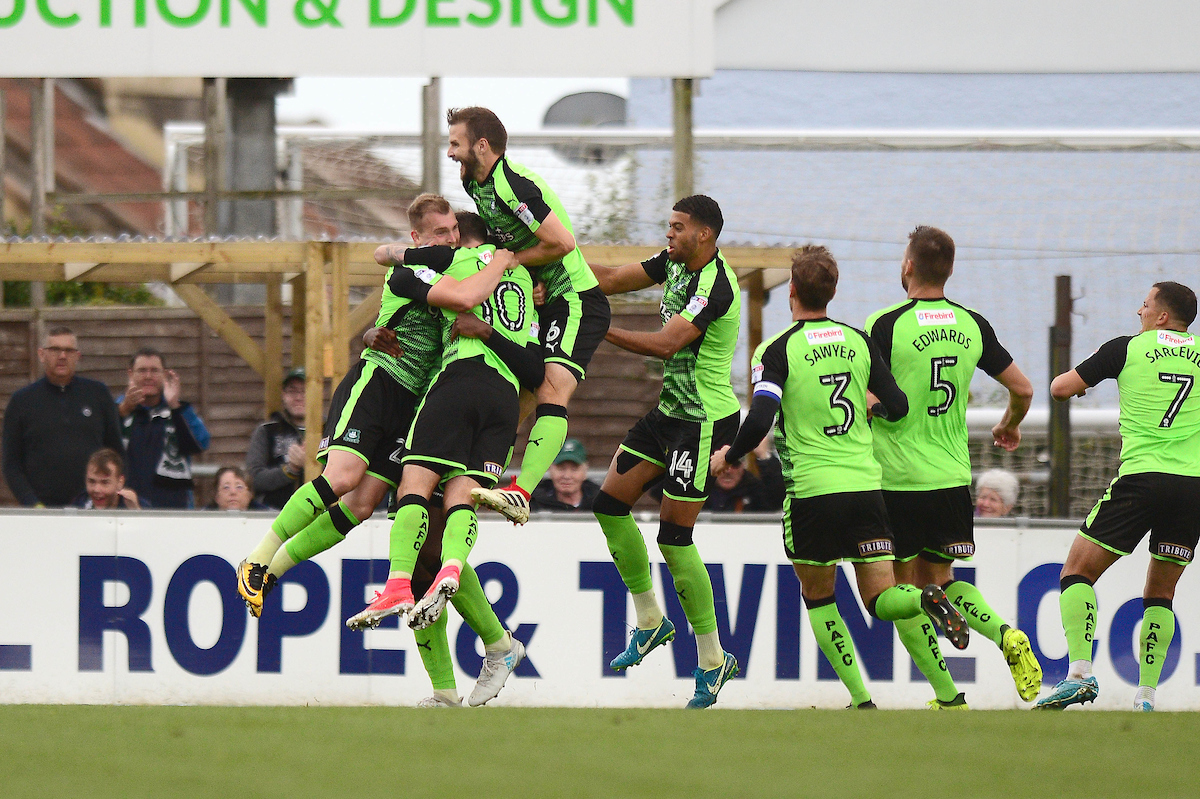 The scoreline remained level until the hour mark, as the scorer of the first goal, Rory Gaffney directed a threatening cross low into the Plymouth area. The cross evaded numerous Plymouth defenders and was tracked by Billy Bodin, who navigated a run to meet the ball around the penalty spot and with a first-time finish the forward managed to beat Lethteren to restore Rovers' lead. 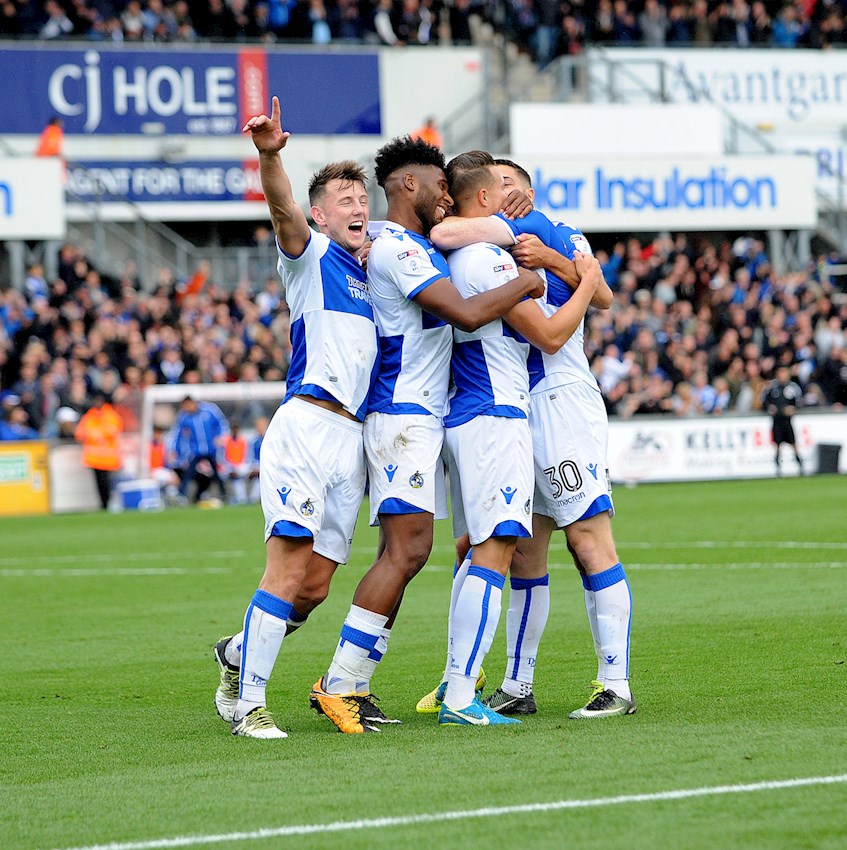 Soon after conceding the second goal, the visitors were reduced to ten men, as right-back Gary Miller was shown a straight red card for a lunging challenge on Joe Partington, just inches outside the Plymouth penalty area.

With the man advantage, Rovers looked to break forward at every opportunity and once again had the ball in the net with just fifteen minutes remaining, as Liam Sercombe headed home from a Lee Brown cross, but both referee and linesman on the near side were quick to signal that the ball had, in fact, rolled out of play before Lee Brown had delivered the cross.

Substitute Tom Nichols looked to make an instant impact following his introduction from the bench and saw a well-aimed shot deflected back to him, only for his second attempt to rise slightly over the bar. The forward then provided a well-directed pass across goal for Liam Sercombe to tap home at the far post, only for the midfielder to be flagged for offside, in what was his second disallowed goal of the game.

In the closing stages, the lively Nichols saw an effort clip the post, as the striker finished a run into the Plymouth area with a measured side-footed attempt that just curled the wrong side of the post.

Plymouth had a late chance to rescue a point, as free-kick from Jake Jervis was deflected into the path of Antoni Sarcevic, who had the goal at his mercy. The Rovers defence was waiting for the midfielder to be flagged for offside, but the signal never came and fortunately for Rovers, the midfielder missed the target from close-range, as the hosts held on for the three points. 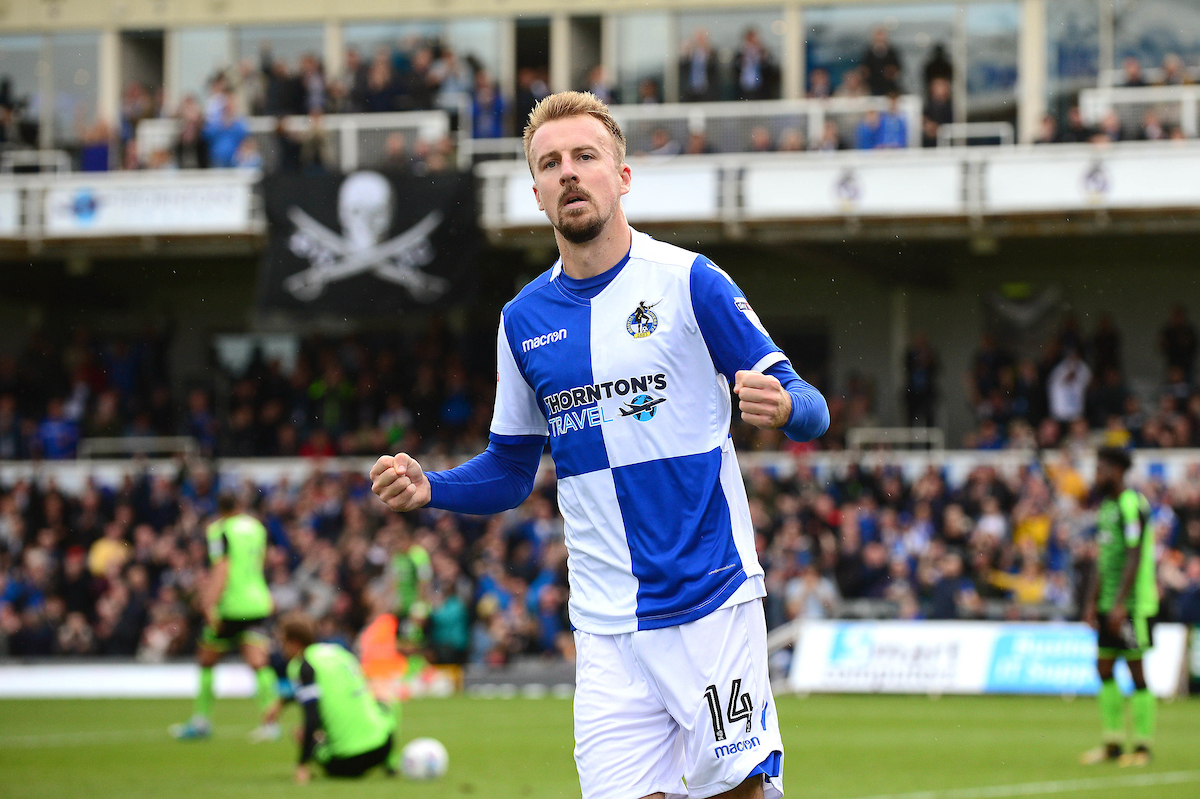