Substitute Ryan Sweeney and Ellis Harrison scored late to allow Rovers to come from behind and rescue all three points at home to Blackpool.

Kyle Vassell managed to open the scoring at the Mem after the in-form striker managed to find the net early in Saturday's encounter, with a well-placed finish that gave Sam Slocombe little chance to make a save to deny the striker.

Billy Bodin cancelled out the visitor's goal just minutes before the half-time break, as the forward was found with a delightful through ball and provided a finish to match the quality of pass from Chris Lines, as Bodin found the net for the seventh goal so far this season.

Both defences stood firm in the second half, as both sets players struggled to create opportunities to challenge for the winning goal, but a close-range header from defender Ryan Sweeney and a goal from striker Ellis Harrison inside the final ten minutes allowed Rovers to register all three points.

In naming his side of the encounter, Manager Darrell Clarke included three changes to the starting line-up that faced Wolves on Tuesday evening.

Into the starting eleven came Lee Brown, Joe Partington and Byron Moore, as the defensive duo of Brown and Partington replaced the suspended Tom Lockyer and full-back Daniel Leadbitter.

Goalkeeper Sam Slocombe started in goal, as the shot-stopper faced his former club for the first time since leaving Bloomfield Road in the summer. 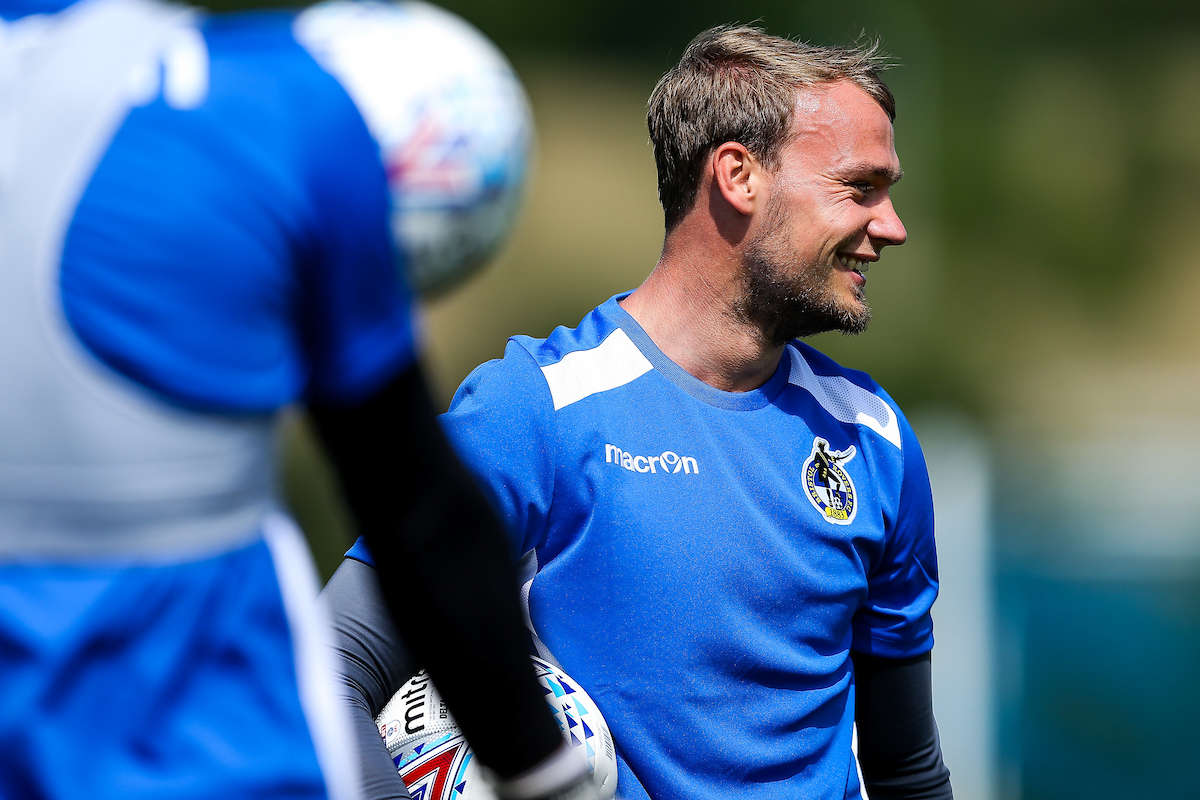 Left-back Marc Bola was chosen to fill in as the right-back for the encounter, as the Arsenal loanee made his first appearance at the Mem following impressive performances on the road against Wigan and Wolves.

The visitors, on the other hand, named an unchanged side for their first visit to the Mem in eighteen years, as Garry Bowyer stuck wide the side that defeated Oxford United last weekend.

In the early stages of the encounter, a deep run down the left from Byron Moore allowed the winger to direct a cross to the far-post. Striker Ellis Harrison managed to track the flight of the ball across the box but saw the delivery headed away from him by a last-ditch clearance by Callum Cooke, who managed to nod the ball behind for a corner just as the striker looked poised to head home. 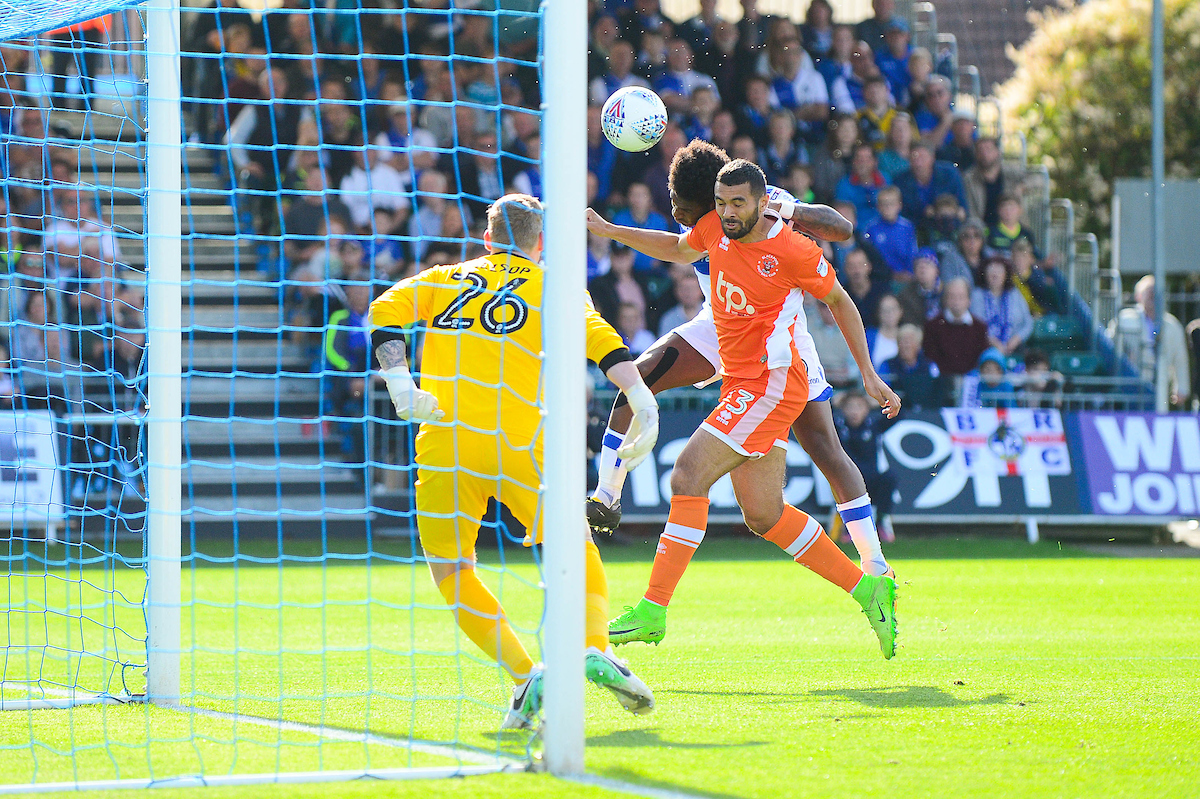 The striker was involved again moments later, as a direct and driven cross from the right from Tom Nichols managed to wrong-foot many Blackpool defenders, as Ellis adjusted his body to strike home from close-range, only for his eventual effort to take a heavy deflection over the crossbar from the outstretched leg of Curtis Tilt. From the resulting corner the striker peeled away from his marker and managed to connect well with a first-time volley, but his effort rose well over the crossbar.

It was the hosts who broke the deadlock with their first attacking move of the game, as a long ball forward from captain Jimmy Ryan evaded the Rovers defence and was picked Kyle Vassell on the outskirts of the penalty box. The striker controlled the ball and navigated a finish into the bottom corner of the net that struck the foot of the post and nestled into the goal. 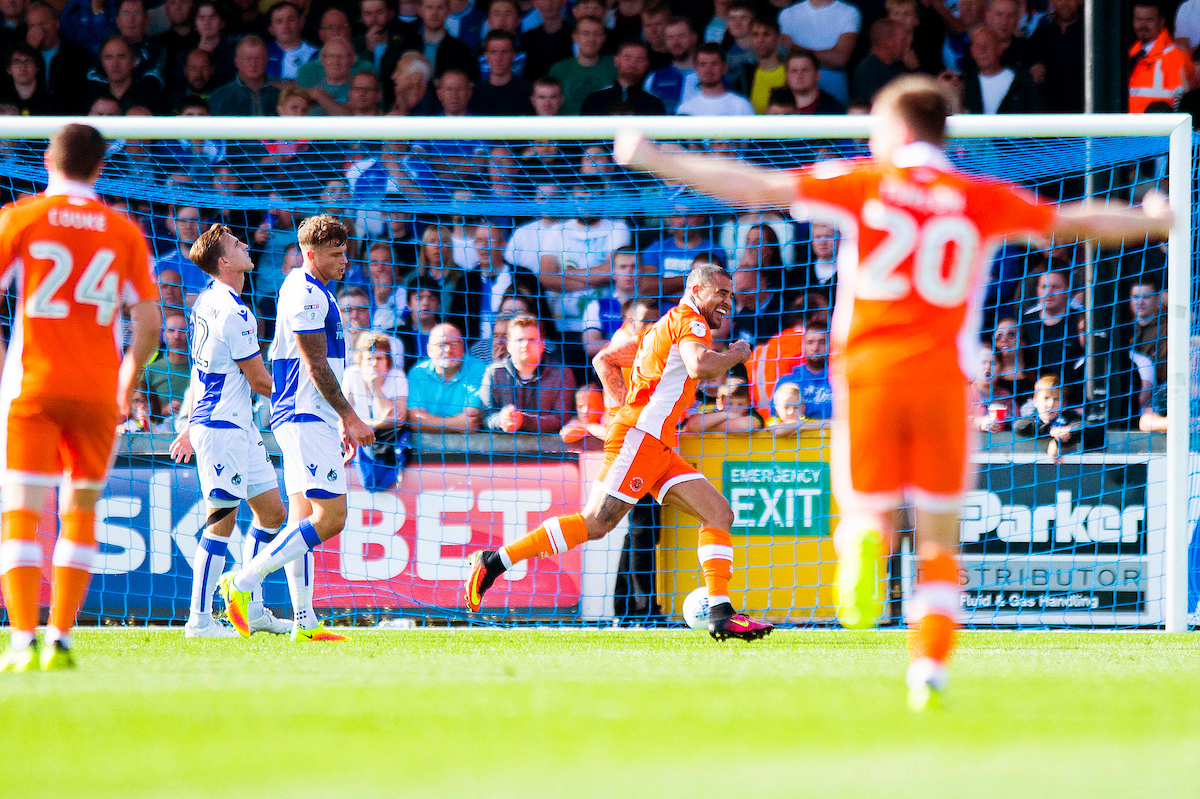 Rovers looked to respond quickly to going a goal down and thought that they had restored balance to the scoreline when Billy Bodin fired wide from the edge of the area. The tricky forward was able to draw in a number of defenders before taking a touch to clear a path to goal and swung a left-footed attempt narrowly past the frame of the goal, with Blackpool goalkeeper Ryan Allsop routed to the spot.

In a first-half where chances were few and far between, it was the visitors who created the opportunity to stretch their lead further as Lee Brown penalised for a foul on the very edge of the Rovers area. Goalscorer Vassell was tasked with taking the set-piece and managed to sneak a driven effort under the six-man wall that was comfortably gathered by 'keeper Sam Slocombe.

Just as it looked like Rovers were going to head back to the dressing room behind, Billy Bodin managed to register an equalising goal for the home side with under five minutes remaining in the first-half. The move was started by a purposeful run forward from Chris Lines that was followed up by a perfectly weighted through-ball from the midfielder that pierced the Blackpool defence and ran into the path of Billy Bodin. The forward was able to leave the ball run across his body before picking out a left-footed finish that lofted the ball out of the reach of 'Ryan Allsop, to bring Rovers back on level terms. 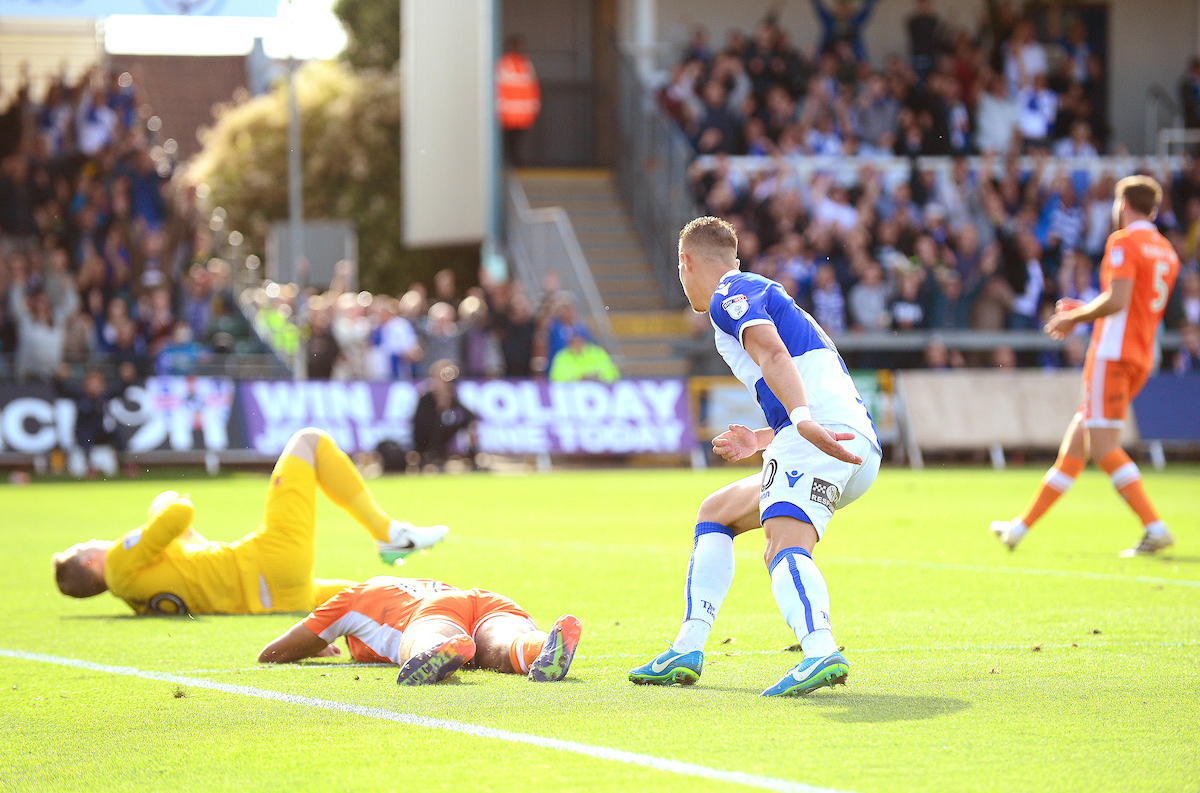 The goal spurred Rovers into life and looked good value to score the next goal. An early cross from goalscorer Bodin caused a host of problems for the Blackpool defence, which allowed Ellis Harrison the opportunity to attack the ball at the near post, but attempting to direct a right-footed finish, the ball ran through the striker's legs and the chance went amiss.

Late on in the first-half there was a penalty shout turned down as Byron Moore took a tumble inside the visitors area, but the referee and fourth official were quick to signal in unison that the winger had in fact dived, which divided opinion on both the pitch and it the stands, as Moore picked up a yellow card for his efforts.

During the half-time break, Manager Darrell Clarke opted to make a double change, as Liam Sercombe and Ryan Sweeney were introduced to replace Byron Moore and Joe Partington, as Rovers changed shape for the second half. 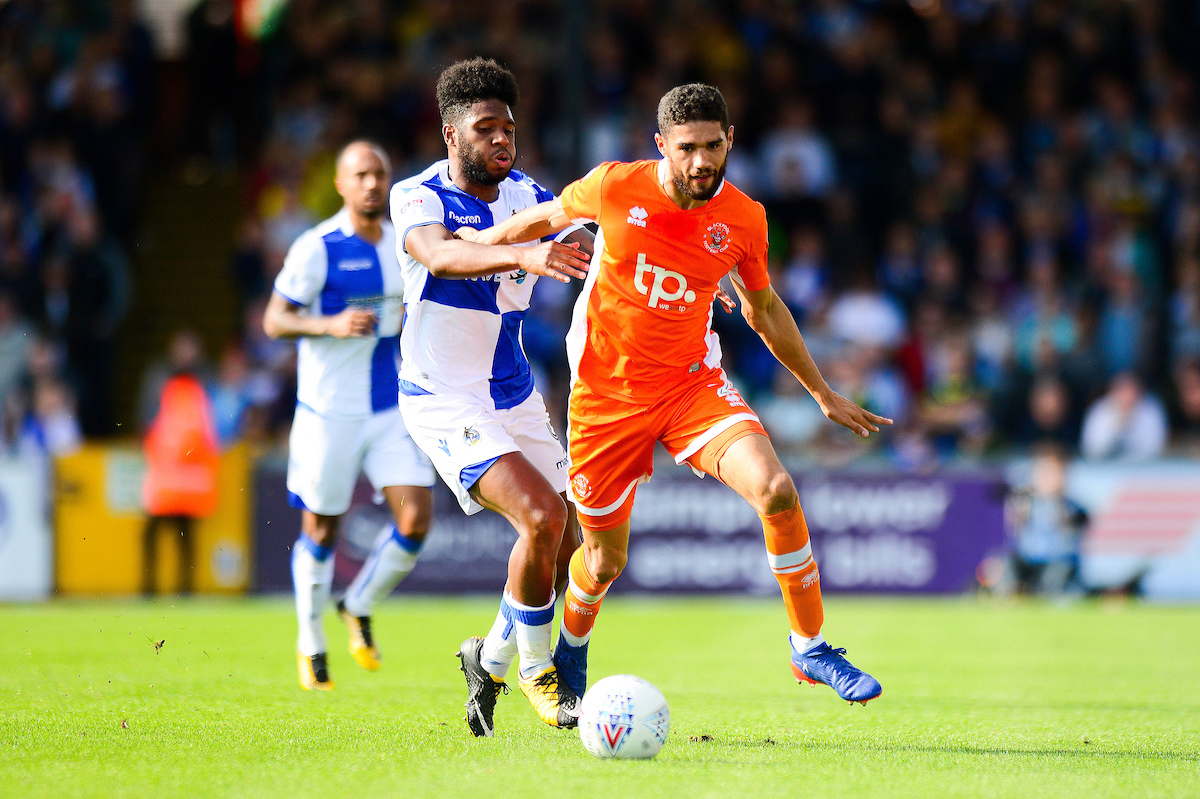 It was the visitors who forged the first opportunity of the final forty-five minutes, as a free-kick from Kyle Vassell was struck with venom from twenty-yards out, but the Rovers wall stood strong and was able to deflect the goalwards shot away from danger.

Rovers made their third and final change in the shape of Dominic Telford, who replaced the industrious Tom Nichols. The substitution followed a fifteen-minute spell of the game where both sides struggled to create a chance on goal.

Although chances were limited, it was the home side that enjoyed prolonged spells of possession on the ball. Patient build-up from Rovers saw the hosts move the ball through several areas of the pitch before Billy Bodin sized up a long-range effort that swerved in the area but was still easily claimed by Allsop, in what was rare shot on target during the second half.

In the final ten minutes, a surging run forward from Dom Telford saw the substitute advance into the area before switching the ball to his left-foot. The striker looked to curl an effort towards the far-post and looked to have done just that, just a glancing header from Curtis Tilt prevented the striker from finding the target.

Rovers managed to find a dramatic late goal inside the final ten minutes, as a perfectly weighted cross from Billy Bodin was headed home from close-range by Ryan Sweeney, as the defender made no mistake in heading emphatically into the bottom corner to ensure that Blackpool 'keeper Ryan Allsop couldn't get a hand to his effort. 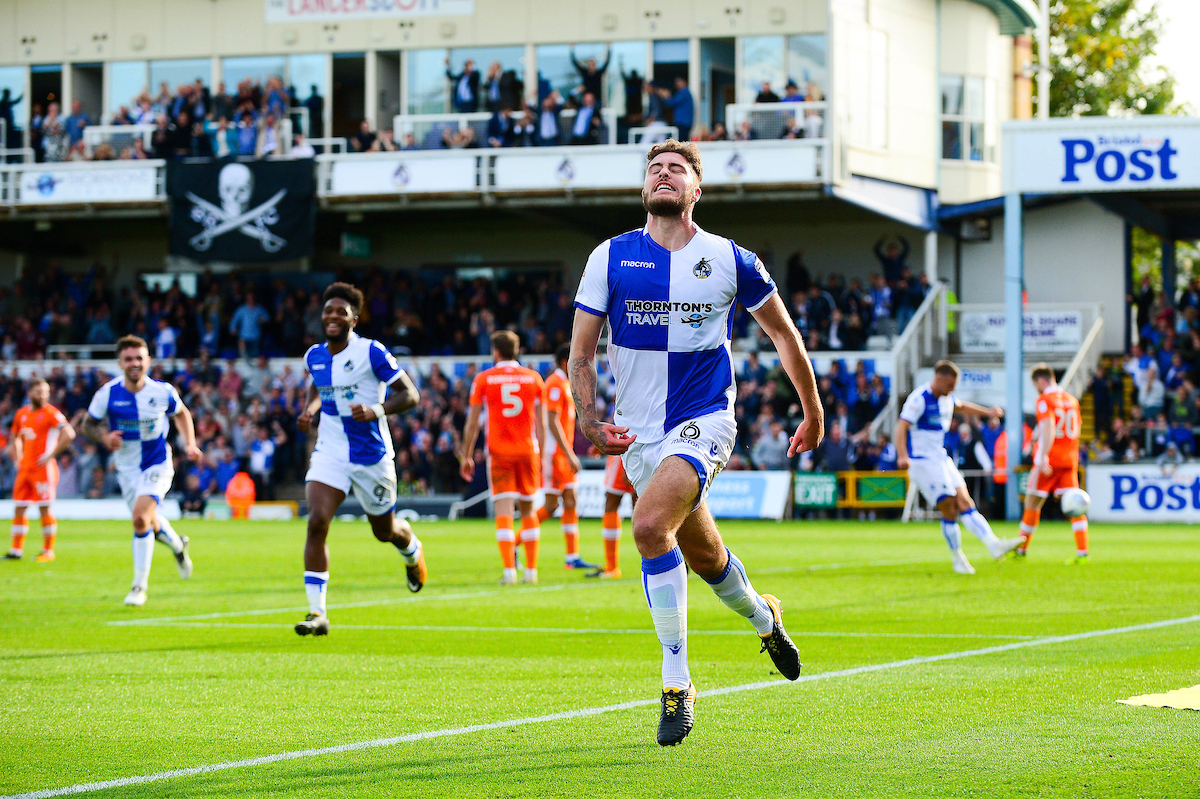 Ellis Harrison put the game beyond Blackpool deep into stoppage time as the striker broke into the area and kept his composure to blast a finish to the left of Allsop, as Rovers picked up all three points in front of the home faithful at the Mem.