Substitute Alex Mowatt scored the only goal of the game inside the final ten minutes, as Oxford United defeated Rovers at the Mem.

In a lively opening twenty minutes, Rovers though that they had broken the deadlock early in the encounter as Rory Gaffney headed home from close-range, but the striker's goal was ruled out for offside.

The visitors had chances of their own, with Wes Thomas coming close to giving Oxford the lead with an individual attempt from outside the box that almost tested Slocombe in the Rovers goal, with both sides unable to force an opening goal in an entertaining first-half.

Chances were hard to come by after the break, but in the final ten minutes, substitute Alex Mowatt grabbed the only goal of the game, as Oxford picked up all three points. 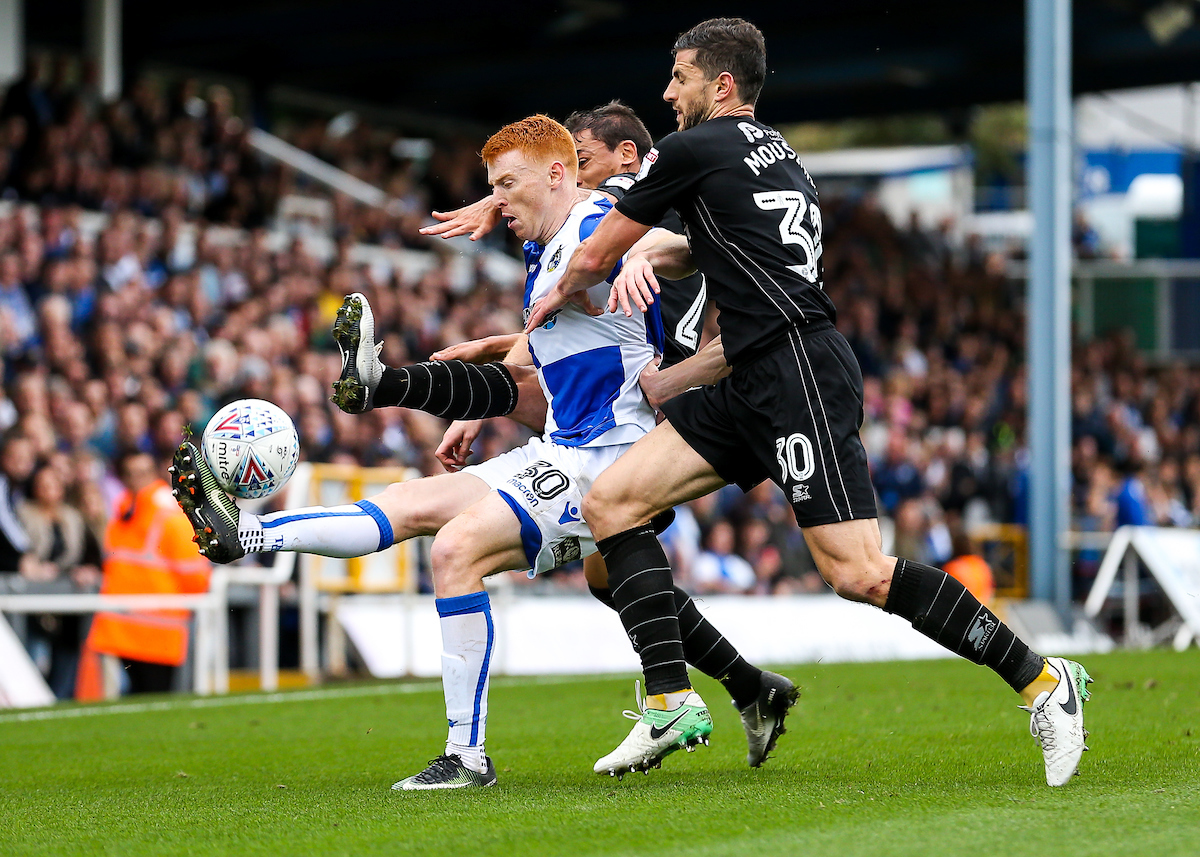 In naming his starting eleven for the visit of Oxford United, Rovers boss Darrell Clarke made two changes to the side that beat Northampton Town convincingly last Saturday.

Tom Lockyer returned to the side following his spell away with Wales and immediately slotted back into the heart of the Rovers defence, with Tom Nichols replacing Billy Bodin in the starting eleven.

The visitors, who started the game on the same points tally as Rovers, were unchanged for their visit to the Memorial Stadium, with Pep Clotet chose to stick with the side that defeated AFC Wimbledon last weekend. 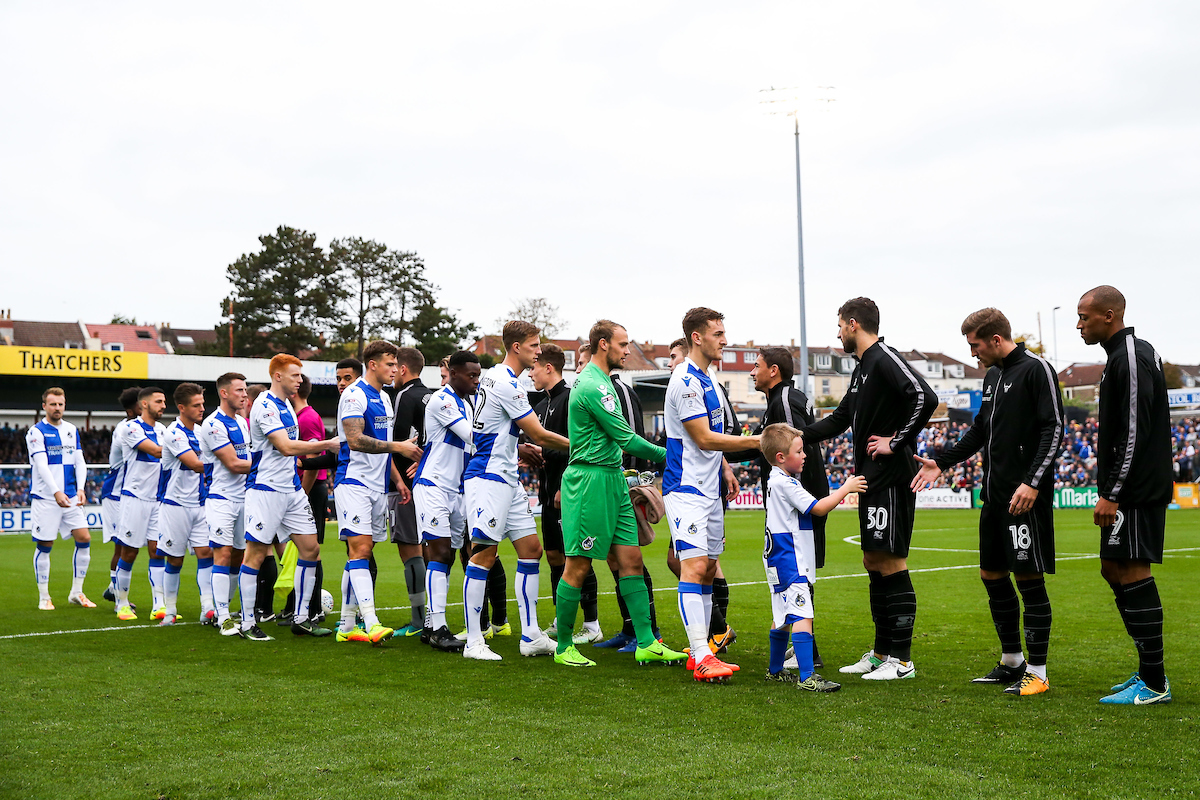 In the opening phases of the game, Rovers thought that had broken the deadlock in the 6th minute, with a move that involved the trio of Lines, Nichols and Gaffney. Following a quick break down the right, Chris Lines produced a perfectly weighted cross into the box that was glanced towards goal by an acrobatic header from Tom Nichols. The striker's header looked destined for the target but perhaps lacked the pace to test Eastwood, as Rory Gaffney provided a powerful header from close-range to put the ball past the Oxford 'keeper, only to look up to see the linesman's flag raised for offside.

The disallowed goal spurred Rovers into life and the home side looked threatening in the final third. Tom Nichols managed to produce a show of some neat footwork in the box that opened up an angle for the forward to strike towards goal. After dropping his shoulder to bend an effort into the far corner, Nichols' effort looked destined for the net but was deflected away by a well-timed interception on the line by Curtis Nelson. 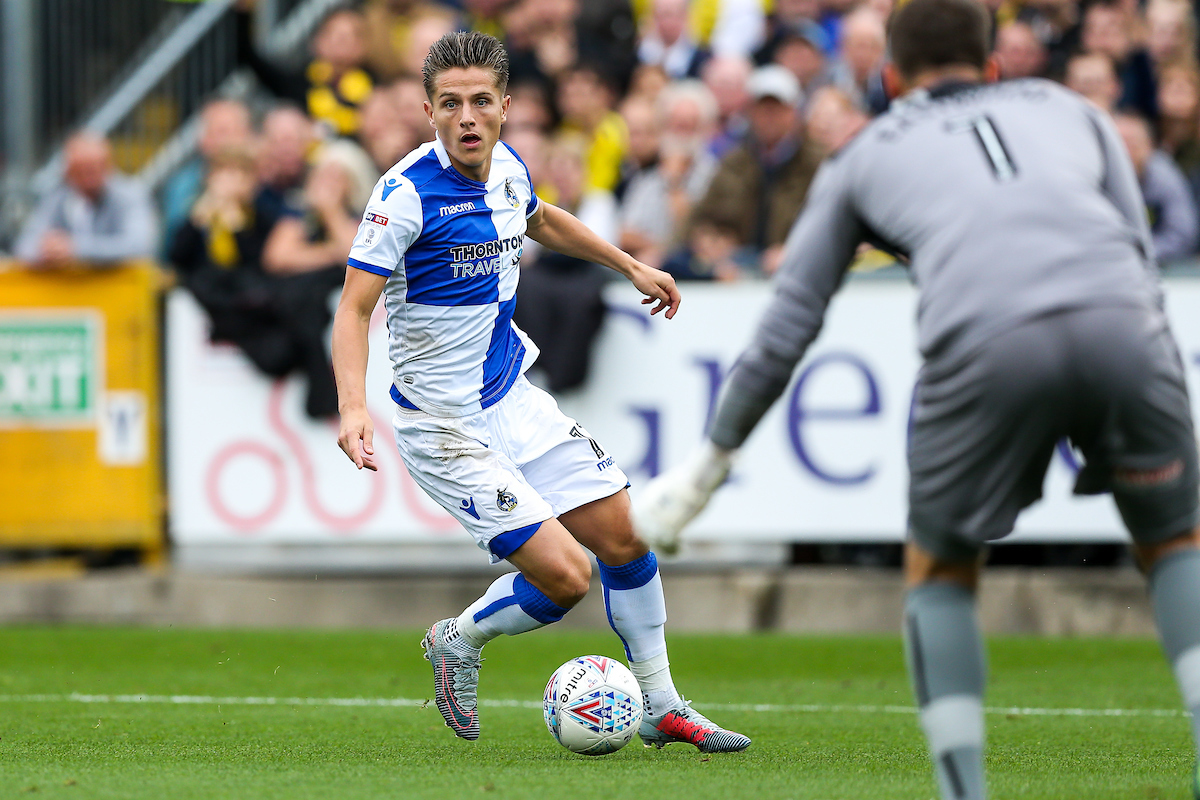 Oxford settled into the contest and looked to house possession in and around the Rovers half. The visitors first chance came courtesy of Wes Thomas, as the striker managed to advance deep into the Rovers final third before firing a powerful right-footed shot that ended up rising just over the target, but had Slocombe concerned in the Rovers goal.

In an open and entertaining opening twenty minutes, it was Rovers who enjoyed the better of the chances. A well-directed ball into the channel by Tom Lockyer bounced perfectly for Rory Gaffney to run onto, with the striker taking the ball into the opponents area. After holding the ball up, the striker couldn't find space to get a shot away but picked out Sercomne with a neat pass. Sercombe evaded one challenge inside the box before firing a left-footed attempt towards goal that was deflected away from danger.

There were anxious moments for Rovers in the opening forty-five minutes, as the attacking duo of Thomas and Payne looked to drop deep to receive possession.  It was Payne who came closest to testing Slocombe, as the striker received the ball on the edge of the box and with a neat touch was able to bypass at tackle from Chris Lines and advance into the penalty box. The striker opted to hit a first-time shot after breaking into the area, which bounced slightly wide of the left-hand post.

As the first-half petered out, chances became few and far between. As the fourth official raised his board to signal stoppage time, James Henry lined up a long-range from a central position, but the midfielder's attempt from outside the box never really threatened Sam Slocombe, who was able to watch the ball sail over the crossbar. At the other end, a first-time strike from Chris Lines from the edge of the area looked like it would dip towards the target, but the intelligently positioned attempt from the midfielder bounced just wide of the target. 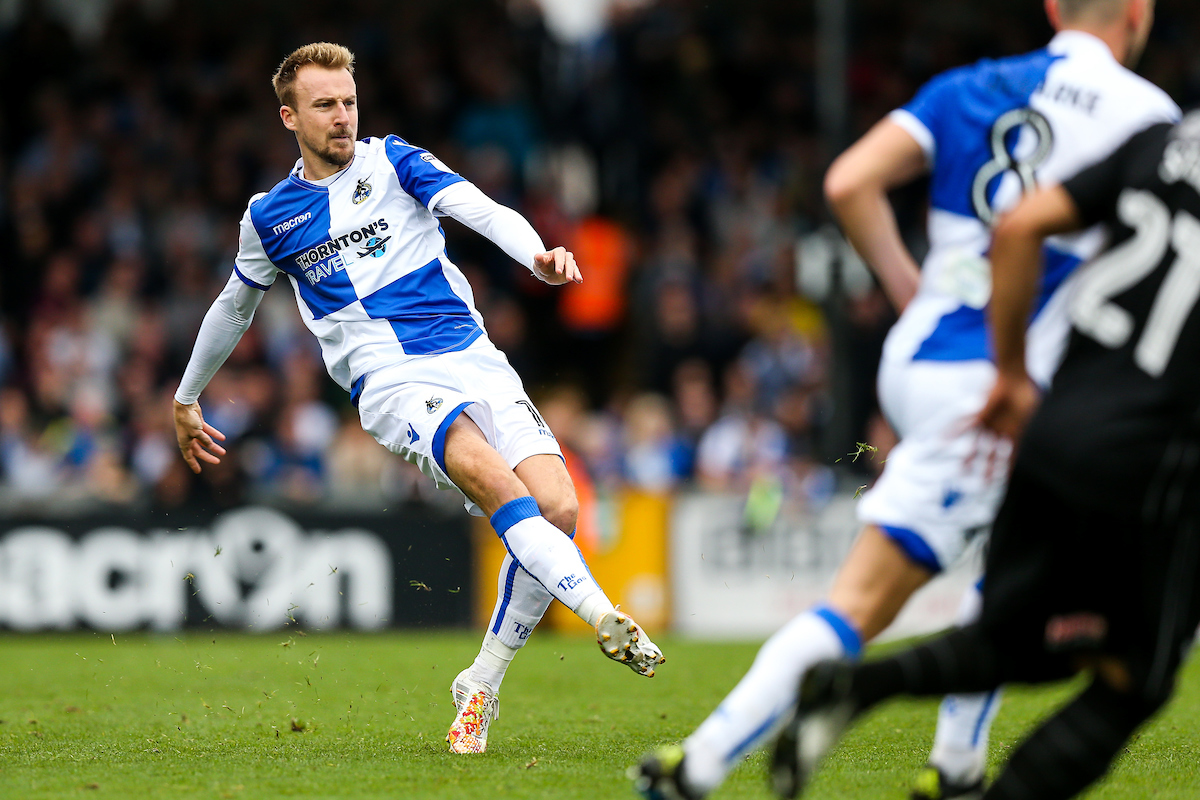 Following the halftime interval, in the ten minutes that followed the break, neither side managed to muster an opportunity on goal. A venture in the box from Joe Partington saw the defender gain a rare piece of space inside the box. With the ball at his feet, Partington attempted to curl a shot towards goal with the outside of his right-foot but was unable to get the required bend on his strike to bring the ball back towards the target.

Before the hour mark, Stuart Sinclair was introduced, as the tireless midfielder was chosen to replace Ollie Clarke.

Oxford looked to break at pace when in possession, with Joe Rothwell and Jack Ruffels looking to provide outlets for the visitors to attack down both wings. It was a cross from Ruffels that was driven in low into the Rovers area, with Wes Thomas the intended target. Ruffels' cross was read by Tom Broadbent, who covered ground to time a slide to deflect the delivery away from Thomas, who was lurking at the far-post. 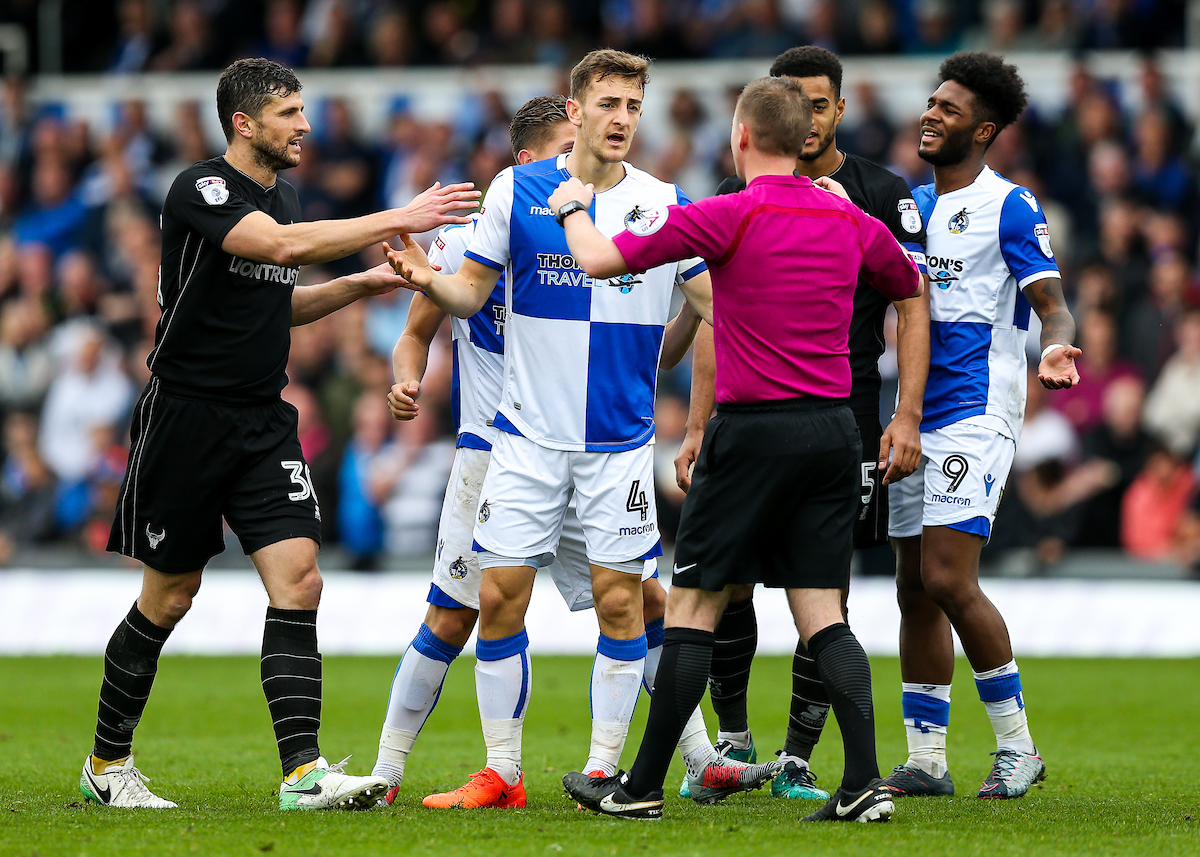 Sercombe, who looked determined to score against his former club, took advantage of the Oxford defence stepping off him and drove with the ball to the edge of the box with a little over twenty minutes remaining. Spurred on to shoot by the Thatchers Terrace, Sercombe connected well with a powerfully struck effort from twenty-five yards, but unfortunately for the midfielder couldn't keep his effort down and the ball sailed over the bar.

In what was Rovers' third and final substitution, Dom Telford replaced Tom Nichols. The striker was immediately involved, as a flicked header from Ellis Harrison found the striker holding his run in line with the final defender. Telford did well to hold off a challenge on the edge of the box, but with just Eastwood to beat in the Oxford goal, a heavy touch at a crucial moment let the striker down, as Eastwood was able to gather the ball unchallenged.

Oxford found the decisive goal just eight minutes before final whistle. With Rovers still dissatisfied with the referee's decision not to award a penalty for foul on Dom Telford, Oxford broke at speed from one box to the other, where substitute Alex Mowatt was on hand to drive a low finish into the corner of the net that was out of reach of the diving Sam Slocombe.

Rovers struggled to create late changes to restore balance to the scoreline. A searching ball down the right by Chris Lines was controlled well by Joe Partington, who used his first touch to beat his man and proceed into the box. Setting himself to cross, the right-back drove a low ball across the face of goal that was deflected away at the near post, as the visitors held on to their narrow lead to record the victory. 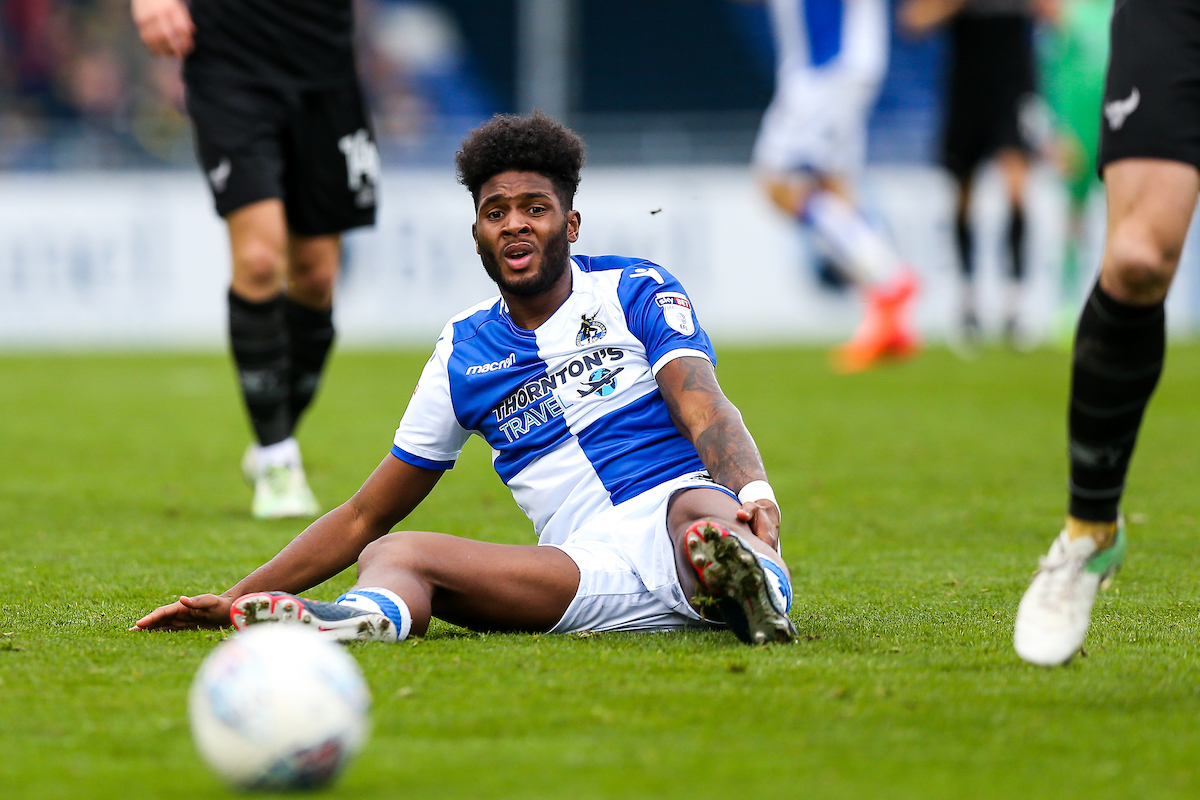