Tom Nichols' first league goal for the Club and a second-half strike from Rory Gaffney allowed Rovers to defeat MK Dons at the Mem.

Rovers looked lively and bright in the first-half and had created a handful of chances on goal. Lee Brown and Tom Nichols both tested MK Dons 'keeper Lee Nichols in the opening forty-five minutes, as a goalline clearance from Joe Walsh from a Rory Gaffney attempt late on the first-half kept the scores level going into the break.

Gaffney again came close at the start of the second-half, as his close-range header from a Chris Lines corner bounced off the crossbar, with the ball almost creeping over the line when bouncing down off the bar.

Tom Nichols took full advantage of a misplaced header towards goal by Ed Upson in the 66th minute and kept his composure to punish the slack defending from the visitors to fire past Lee Nicholls in the MK Dons goal to register his first goal for the club.

Minutes later Rory Gaffney extended Rovers' lead, with a fine left-footed strike from outside the box that was well-placed into the bottom corner, giving 'keeper Lee Nicholls little chance of making a save at full-stretch, as Darrell Clarke's side ran out winners at the Mem. 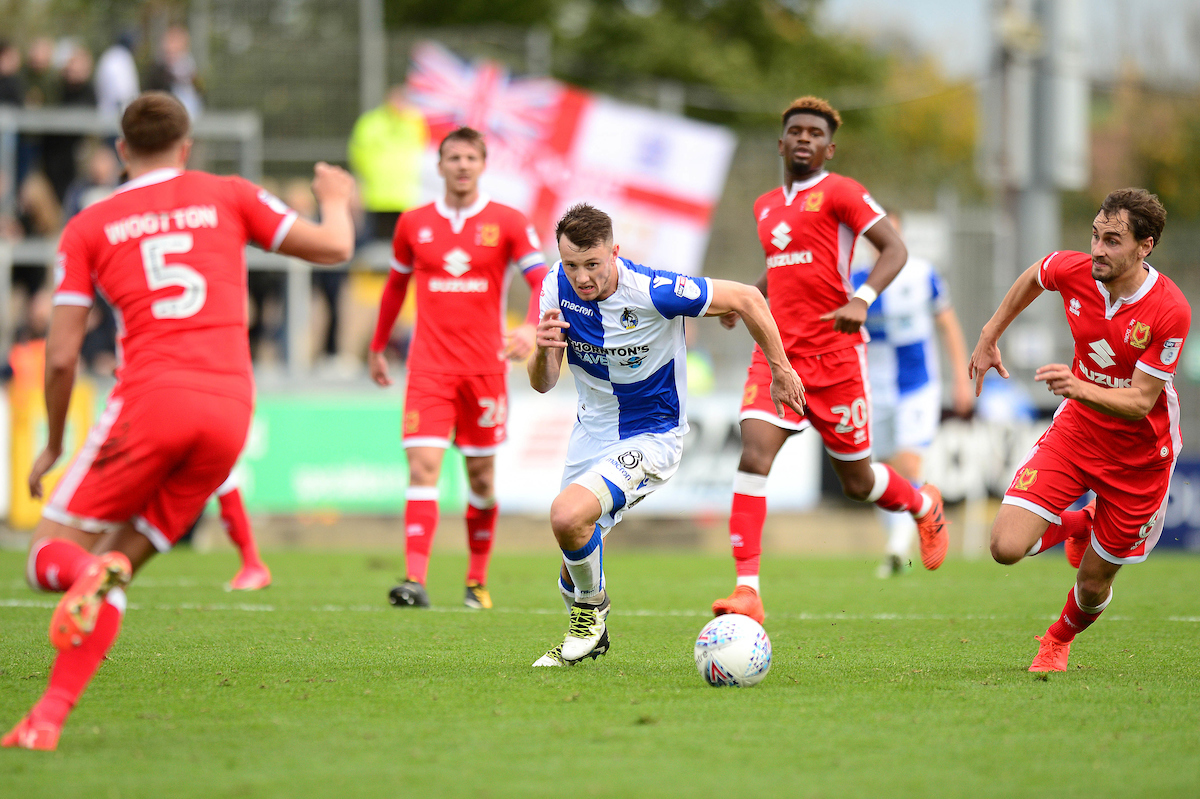 In the build-up to the visit of MK Dons, Rovers boss Darrell Clarke named two changes to the side that were defeated by Rochdale last weekend.

Into the starting eleven came Tom Nichols and Chris Lines, as Joe Partington dropped to the bench, with Ellis Harrison missing the game through suspension.

The visitors went one further and made three changes for their visit to the Mem, with George Williams, Aaron Tshibola and Gboly Ariyibi all coming into the side. 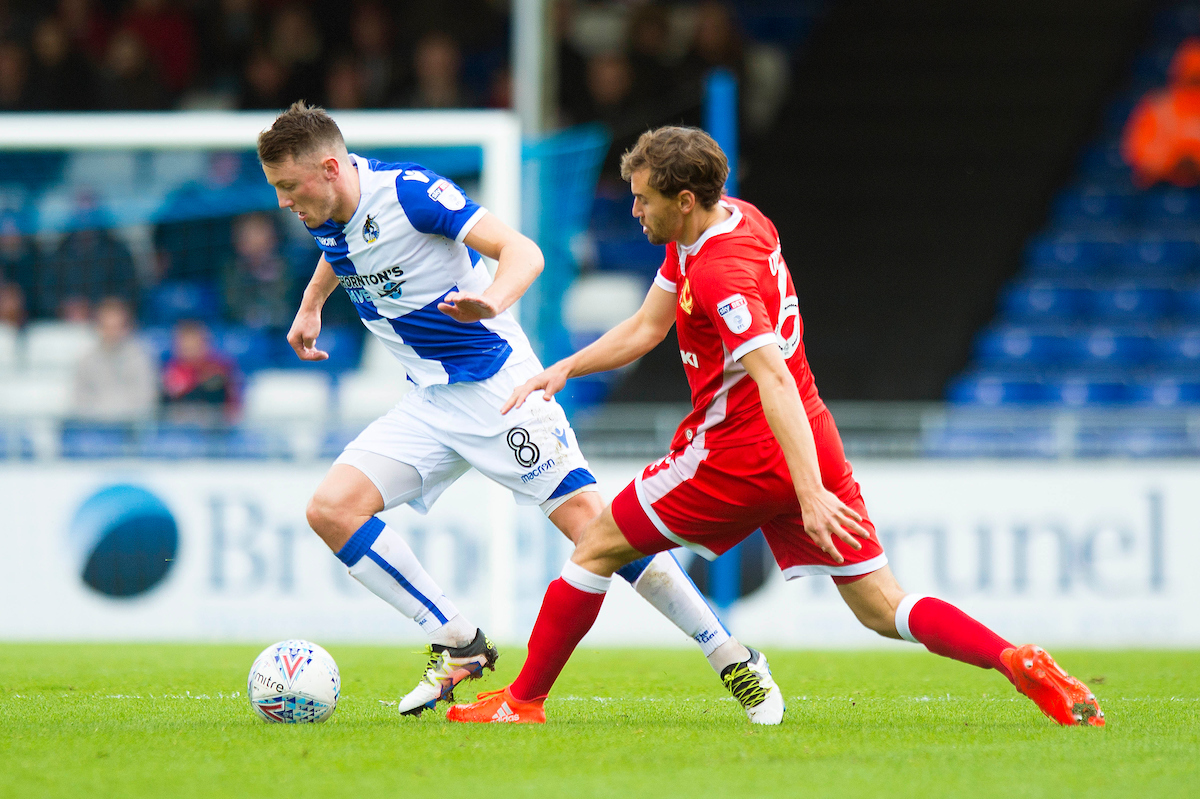 In the opening phrases of the game, it was Rovers who started the contest the brightest of the two teams on display.

Striker Tom Nichols was the first player to register an attempt on target, with the forward latching onto a deflected cross inside the area inside the opening ten minutes. Directing a well-placed volley towards goal, Nichols managed to test 'keeper Lee Nicholls from a central position, with the MK Dons shot-stopper forced to dive at full-stretch to turn the striker's effort onto the post, just as it looked like Nichols had down enough to squeeze his effort into the bottom corner. 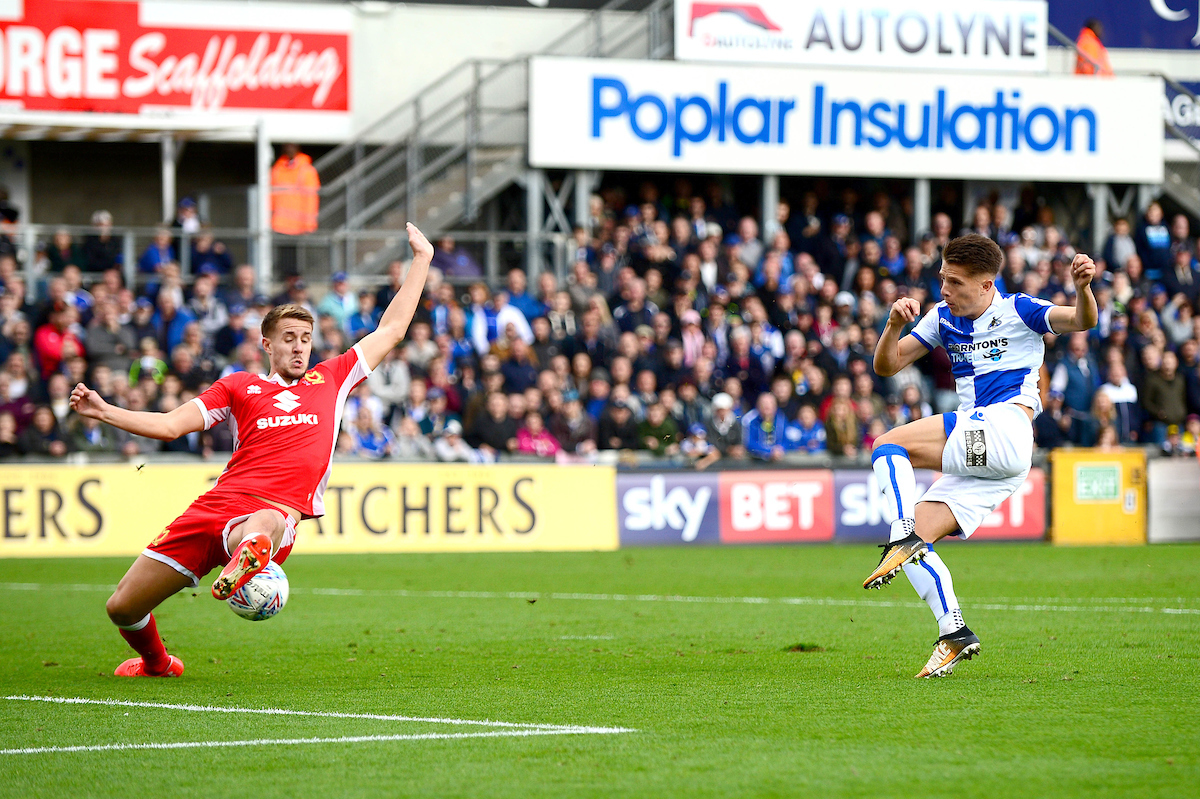 The visitors looked patient to allow play to develop and looked content at sharing passes across the midfield. A pinpoint pass from Ed Upson managed to split the centre-back pairing of Tom Lockyer and Tom Broadbent, with Tom Lockyer reading the precise pass well into the Rovers box and was able to execute a well-timed sliding challenge to play the ball off Chuks Aneke and behind for a goal-kick to elevate the pressure on the Rovers back-four.

Moments later a cushioned header from Chucks Aneke directed the ball in the path of Gboly Ariybi, as the striker advanced into the box. Just as Ariybi looked set to shoot, a well-timed challenge from Tom Broadbent took the ball off away from the forward as the defender completed the task and cleared the ball away from danger.

Rovers constructed the best chance of the game midway through the first-half. Following a flowing move of passes down the left, a neat one-touch pass from Stuart Sinclair opened up a path for Lee Brown to charge into the area unchallenged. Taking advantage of the space inside the box, Brown looked up and produced a driven towards goal that had to be palmed away by Nicholls, who could only push Brown's effort wide of the target.

The home side looked positive throughout the first-half and continue to build a series of chances on goal. A threatening and direct cross from a wide position by Liam Sercombe curled towards the head of Rory Gaffney, who had just managed to get away from his marker inside the box. Rising to direct a header towards the target, Gaffney mistimed his close-range header, with the ball bouncing harmlessly wide of the target.

Gaffney's attempt started a string of chances for Rovers in the quick succession. Chris Lines took charge of a set-piece just twenty yards out from goal and opted for a powerfully struck effort that narrowly missed the target, with the ball brushing the crossbar on its way through.

In the minutes leading up the break, Rovers narrowly missed out on the chance to take the lead, when a last-ditch clearance on the line by Joe Walsh kept the scores level. The chance came following a fine save from Lee Nicholls to deny Liam Sercombe, as the Rovers midfielder managed to poke a bouncing in the box towards goal, but his effort was pushed away by Nicholls. The rebound from Nicholl's save dropped into a congested area and fell kindly for Rory Gaffney, as the striker directed an attempt towards the empty-goal, only to see his effort cleared on the line by the covering Joe Walsh.

Following the half-time break, it was Gaffney again that came close to breaking the deadlock. An inswinging corner from Chris Lines was flashed across the six-yard box, where Gaffney was able to thunder a header towards goal, only for his effort to bounce back from the underside of the crossbar, where the MK Dons defence were on hand to rush the ball clear, just as it looked like the effort may creep over the line. 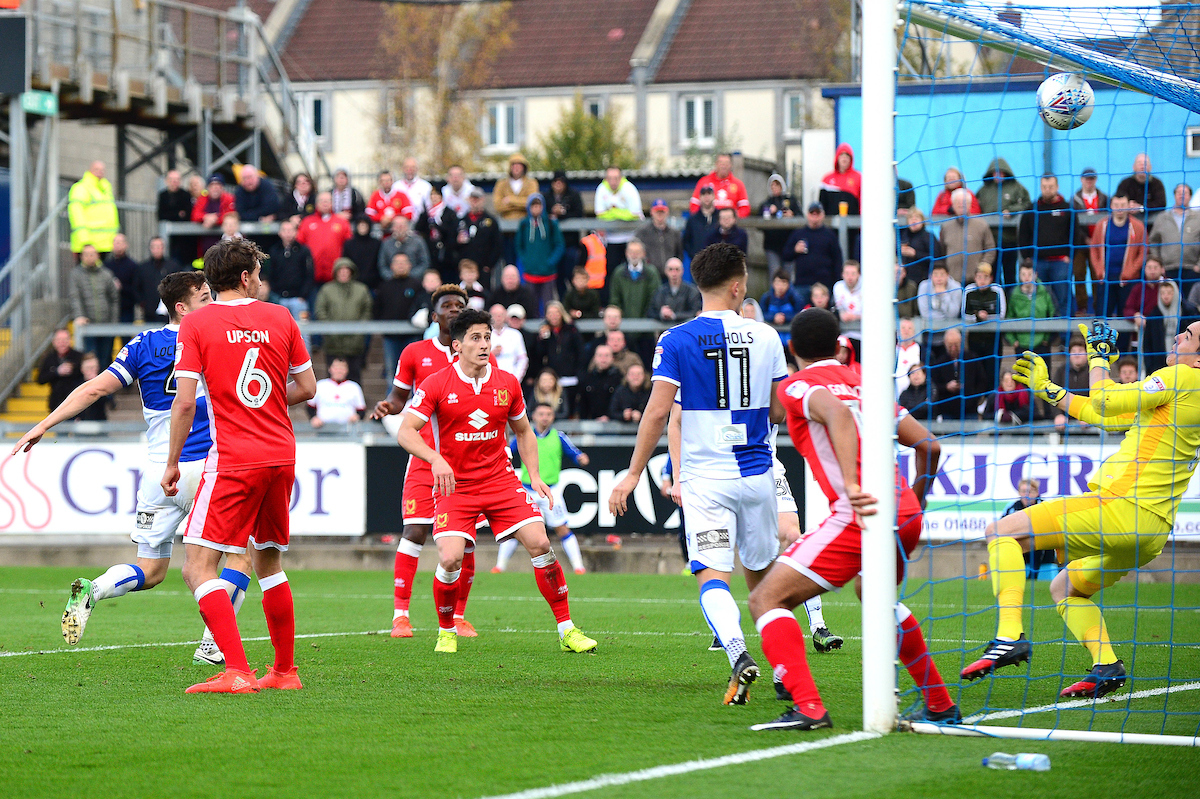 As the game progressed past the hour mark, Rovers took the lead in the encounter courtesy of Tom Nichols. The striker found himself in the right place to punish a slack header back towards his own-goal by Ed Upson, as Nichols kept his composure in a one-on-one situation with Lee Nicholls and the striker fired a well-placed effort past the MK Dons 'keeper to open his account for Rovers. 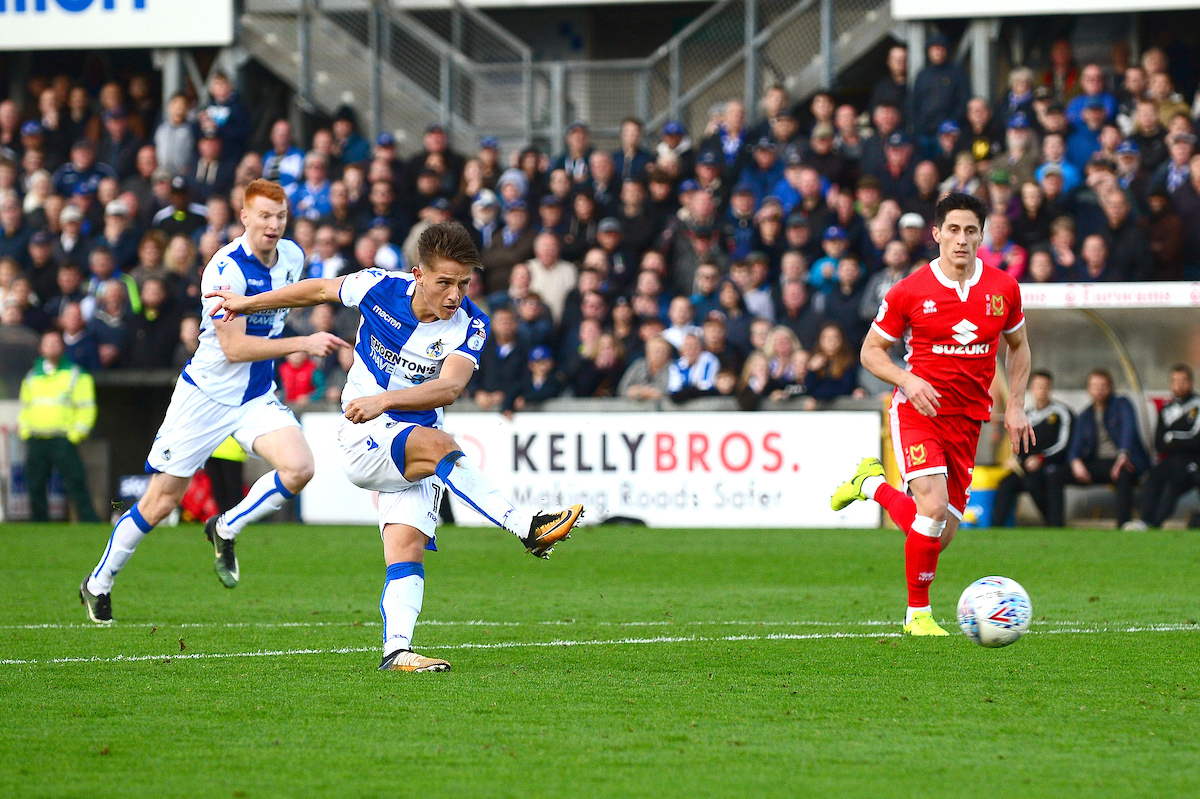 The home side didn't have to wait long for the second goal of the afternoon, as Rovers extended their lead just seven minutes after Nichols' opening goal. After being denied by both a goalline clearance and the crossbar earlier in the game, Rory Gaffney finally got the goal his performance deserved in the 73rd minute. The striker received the ball with his back to goal and was able to produce a quick turn to open up space to drive a left-footed shot across goal that nestled into the bottom corner, registering the striker's sixth goal of the season.

With a commanding two-goal lead, the home side had a chance to score a third goal, as the two goalscorers looked to combine inside the area. Chris Lines started the move, with the midfielder breaking with the ball deep in the final third, before setting Rory Gaffney free. The striker ran with the ball into the box and fired a low pass across the face of goal that narrowly missed Tom Nichols at the far-post inside the final ten minutes.

In stoppage time, a rare effort for MK Dons saw Chuks Aneke blast an effort well over the crossbar, as Rovers took all three points on offer.

Rovers now face three games in cup competitions, starting with the visit of West Ham United U-23 in the Checkatrade Trophy this coming Tuesday, before a trip to Meadow Lane in the Emirates FA Cup on Friday night. 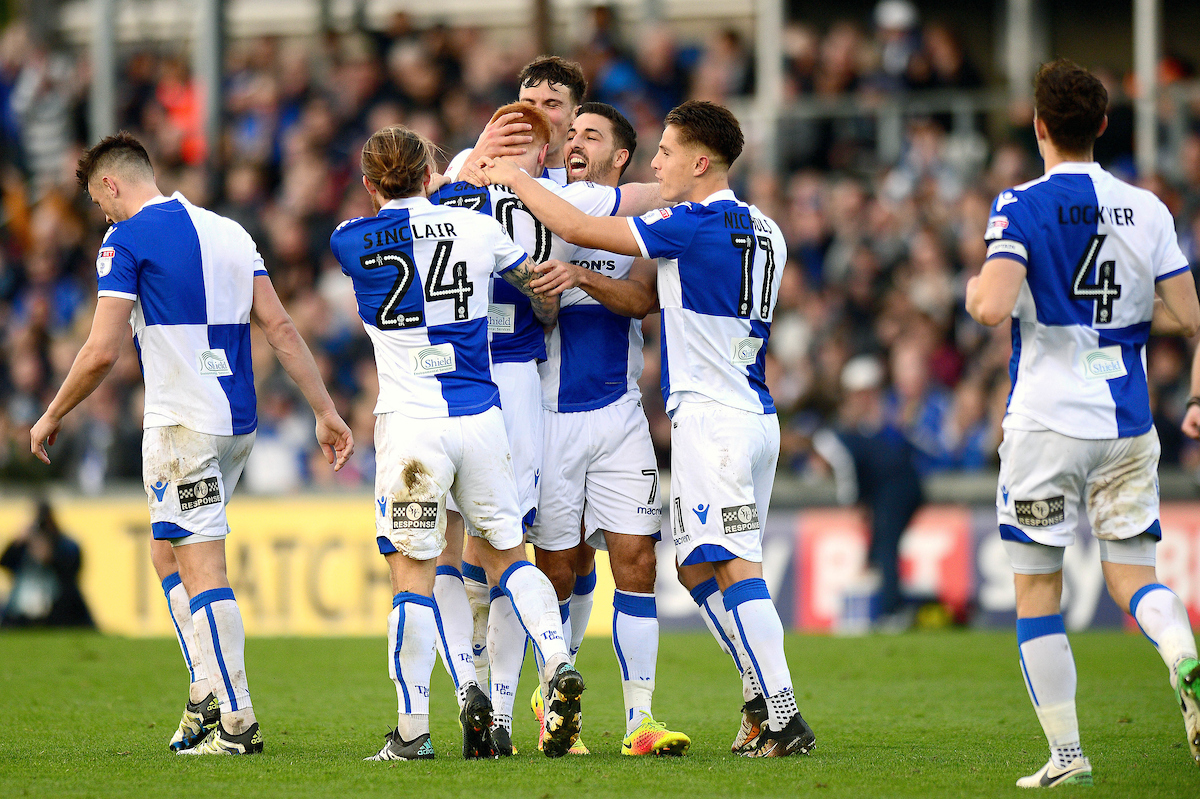