Rovers' slow start to the encounter at Spotland allowed the hosts to take an early lead, as Matthew Done was on hand to complete a flowing move that was orchestrated by both Ian Henderson and Brad Inman, with Done providing a close-range finish to ensure that Inman's chipped finish over Adam Smith made it into the net.

The visitors did manage to register three shots on target during the first half, with Liam Sercombe looking persistent in his desire to test Rochdale 'keeper Josh Lillis from range. A long-ball from Tom Broadbent provided Rory Gaffney with an opportunity to bring the scores back level on the half-hour mark, but the striker's cleanly struck volley narrowly missed the target.

In the second half, Rovers created a number of chances, with both Nichols and Telford coming close to finding an equaliser. Nichols saw a close-range shot deflected clear off the line, as Stoke loanee Dom Telford was able to turn swiftly in the area to hit a well-struck left-footed effort that forced 'keeper Lillis into making a save, as Rovers couldn't quite find an equalising goal to cancel out Matthew Done's opening goal.

In naming his squad for the fixture at Spotland, Manager Darrell opted to make five changes to the side that were defeated on Tuesday evening at Shrewsbury.

Three of those changes came in defence, as Lee Brown, Daniel Leadbitter and Tom Broadbent came into the starting eleven. There was also a change in goal, as Adam Smith made a return to starting line-up, making his first appearance since our fixture against Oldham Athletic.

In the final change, Stuart Sinclair was included in the Rovers midfield, as Chris Lines dropped to the bench.

Following an uneventful opening five-minute spell at Spotland, it was the hosts that opened the scoring in the eighth minute. Ian Henderson broke from midfield and drew in Tom Lockyer, before digging out a pass to the unmarked Brad Inman. The Australian broke into the area and managed to lift a finish over the onrushing Adam Smith. For a moment it looked like the backtracking Rovers defence may be able to prevent the goal with a last-ditch goalmouth clearance, but the ball was smashed home from close-range by Matthew Done to provide the first goal of the game.

Goalscorer Done was almost on the scoresheet shortly after his opening goal, as the midfielder proved to be a threat in the final third. A low cross from wide out right from Calvin Andrew was fired across the face of goal where Done applied the faintest of touches that saw the ball creep narrowly past the far-post.

Rovers responded with their first shot on target moments later. Following a slack clearance from the Rochdale defence, Liam Sercombe was able to recycle possession and drive towards goal. Unchallenged the midfielder was able to look up and test Lillis with an effort from range, which the goalkeeper was able to watch through the blustery conditions and was able to claim the ball at a comfortable height.

With the home side enjoying the larger spells of possession in the first half, Rovers had to be patient in waiting for chances to present themselves. A well-weighted diagonal long-ball from the left-foot of Tom Broadbent wasn't picked up by the Rochdale back-four, as the delivery swung deep to Rory Gaffney at the far post. Keeping his gaze fixed on the ball, the striker was able to connect well with a first-time volley that flashed just past the post and into the side netting. In the aftermath of Gaffney's, Rovers had a penalty shout turned down as Ellis Harrison appeared to be held inside the penalty area when attempting to pursue a cross. 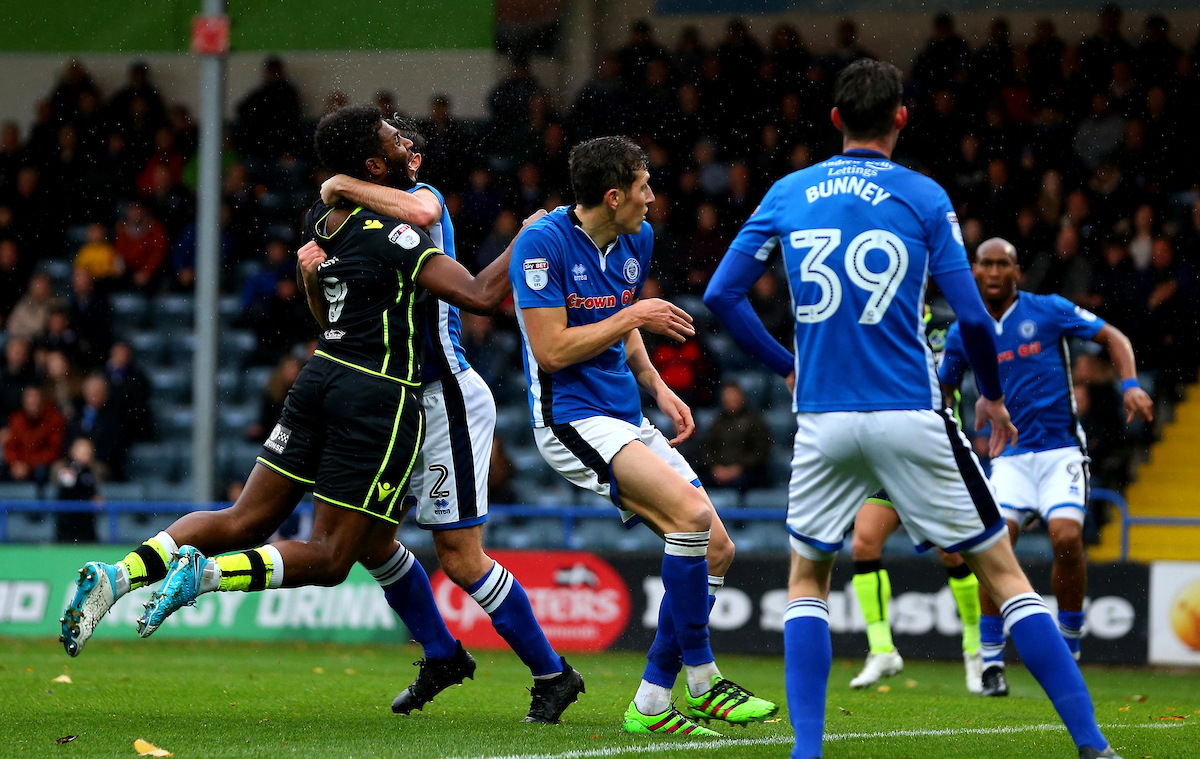 The chance from Gaffney signalled the start of a bright spell of play for Rovers, who showed encouraging signs as the half progressed. Following a quick break that saw the visitors move the ball quickly along the length of the pitch, Rory Gaffney was able to take control of the ball and dig out a cross that wasn't cleared by the hosts. With the ball rebounding in the area, Ollie Clake charged at the loose ball and poked a volley towards goal that clung in the air before narrowly brushing over the crossbar.

In the five minutes leading up to the half-time break, Matthew Done again had an opportunity from inside the six-yard box to register a goal. A low and direct cross into the Rovers penalty area from Joesph Bunney found the midfielder, as Done applied an outstretched leg that deflected the ball past the right-hand post.

In total, Rovers had three shots on target in the first-half, with two of those effort's coming courtesy of Liam Sercombe. The midfielder again took advantage of a loose clearance from Rochdale and on the turn hit a driven effort across the surface that was too central on the target and allowed Lillis to get his body behind the ball to make a save. 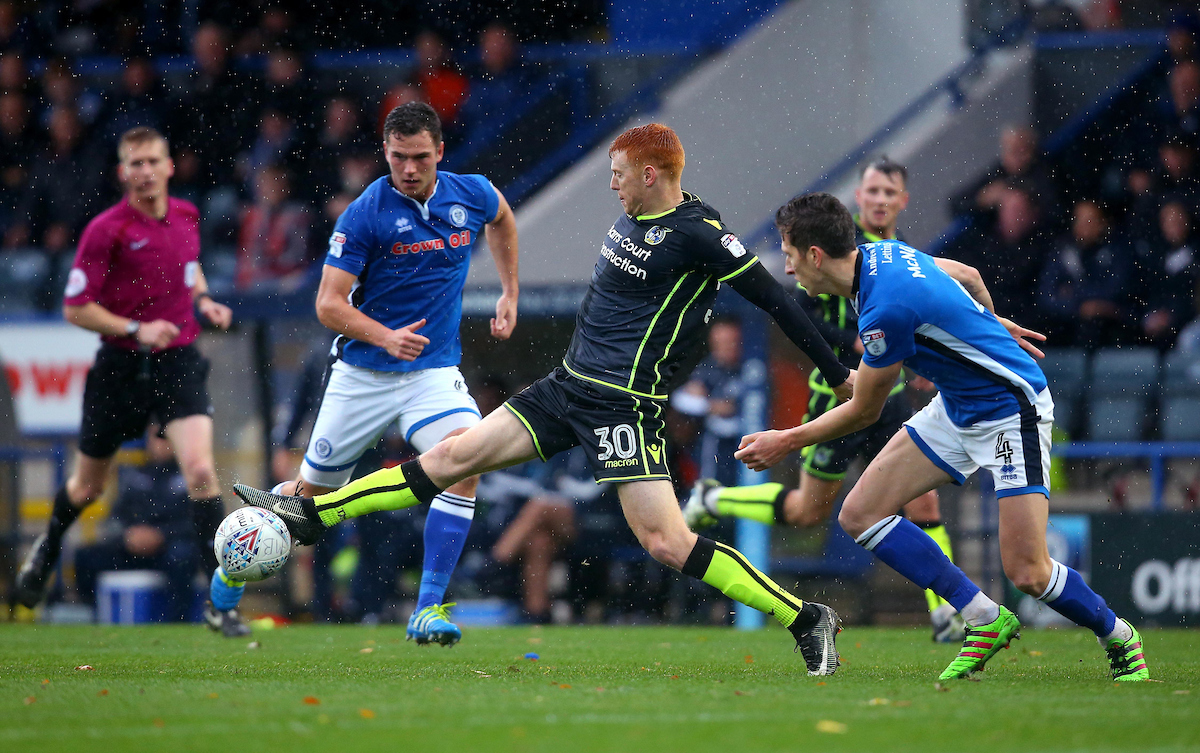 After the half-time interval, Rovers looked to begin the final forty-five minutes on the front foot. Following a fortunate rebound in the middle of the park, Ollie Clarke saw the ball stick to his feet as he advanced towards the edge of the area. With both space and time, Clarke looked up and aimed a long-range attempt that carried on rising over the target from twenty-five yards out.

Ollie Clarke was again involved in Rovers' next opportunity on goal, a little after the hour mark. A neat series of passes saw Rovers break down the left, with Daniel Leadbitter advancing deep before cutting back a pass to Liam Sercombe inside the area. The midfielder took a touch in an attempt to clear a path to goal, but faced with the congested penalty area in front of him, Sercombe opted to roll a square pass to Ollie Clarke. Looking to fire an effort inside the near post, Clarke was unsettled by a lunging attempt at a clearance from one of the pursuing Rochdale defenders and as a result, his first-time strike drifted wide of the post.

From the bench, both Tom Nichols and Chris Lines were introduced at it was Nichols who came close to find an equalising goal inside the final fifteen minutes. It was another adventurous run down the right by Leadbitter that started the move as the defender's cross was headed towards goal by Nichols. In the wet and slippery conditions, 'keeper Josh Lillis fumbled Nichols' effort as the striker saw the ball drop to his feet as his instinctually poked the ball towards goal, only to see his effort hurried off the line by McNulty. 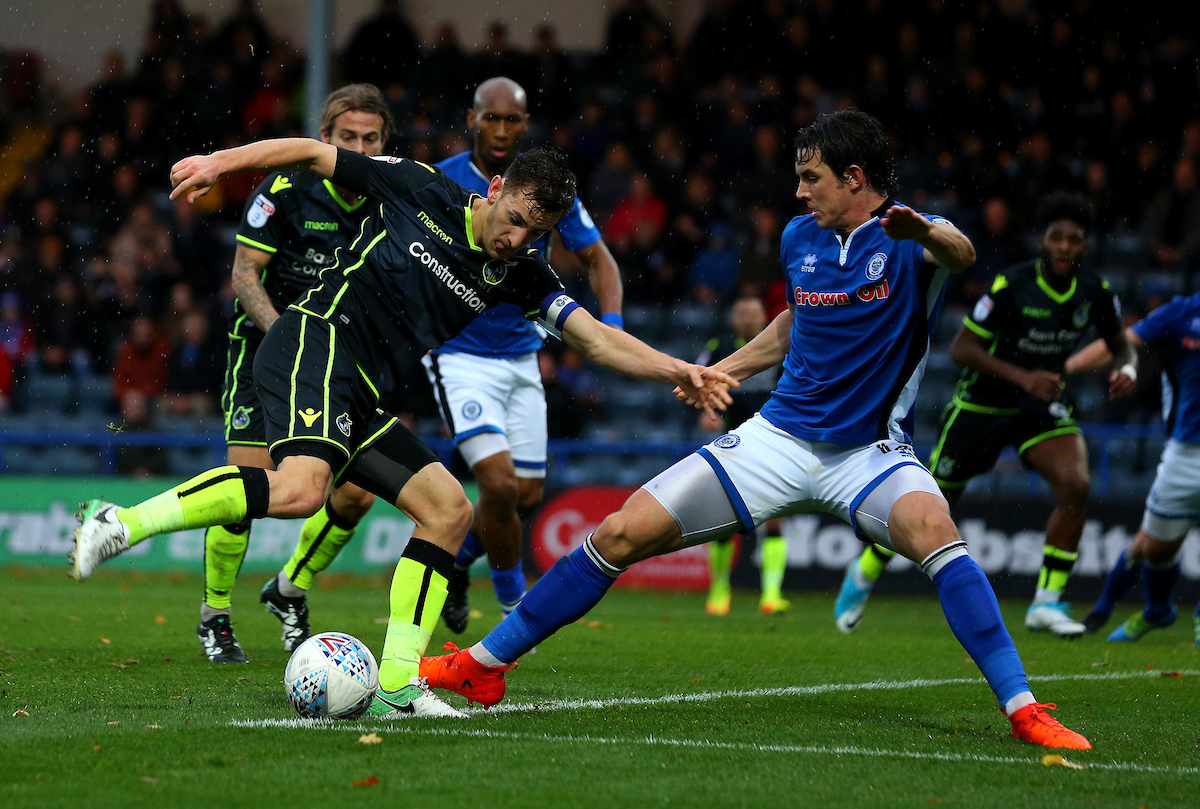 With under ten minutes left in the game, it was another substitute that came close to scoring a late equaliser for Darrell Clarke's side. A high cross into the box from Leadbitter dropped kindly for Nichols, who managed to squeeze a pass through to Dom Telford. Turning sharply inside the six-yard box to face goal the striker hit a left-footed shot that found the target forced Josh Lillis to push the ball around the post, as Rovers couldn't quite find an equalising goal to level the contest late on.