Billy Bodin's first-half goal was matched with five second-half goals, as a promising display in front of goal led Rovers to victory at Sixfields.

Billy Bodin's first-half goal was followed with a second-half brace from Ellis Harrison and strikes from Rory Gaffney, Liam Sercombe and Dom Telford as Rovers scored six goals in a thrilling encounter at Sixfields.

Bodin's ninth goal of the season was the last contribution to the game, as the forward limped off following his goal after suffering an injury and was replaced by Tom Nichols.

The substitute was lively from the bench but missed the opportunity to open his account for Rovers from the penalty spot, as the striker's first-half penalty was saved by Matt Ingram.

Five unanswered goals in the second half topped an impressive performance from Darrell Clarke's men - who secured not only the three points but also a first league clean sheet of the season. 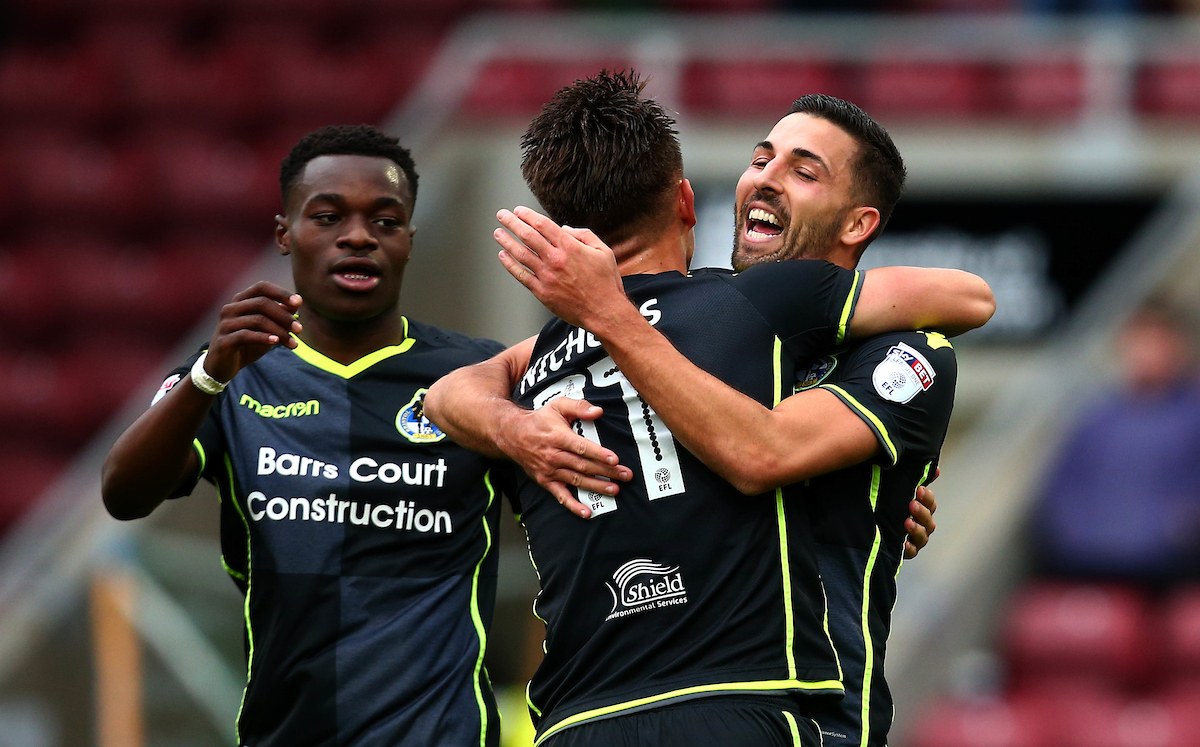 With the absence of both Tom Lockyer and Ryan Sweeney on international duty, Rovers boss Darrell Clarke made three changes to the side that defeated Plymouth Argyle last weekend, with all the trio of changes all coming in the Rovers defence.

Tom Broadbent and Rollin Menayese were tasked to form the heart of the Rovers defence, as Rollin made his first start in the EFL. The other change came in the shape of Marc Bola, who was preferred to Lee Brown at left-back for the fixture.

With Tom Lockyer missing, it was once again Ollie Clarke who was handed the captain's armband for Rovers.

There was a landmark milestone appearance for Chris Lines, as the midfielder's inclusion in the starting eleven marked his 300th appearance for Rovers.

Former Rovers midfielder, John Joe-O'Toole didn't feature in the game against his former club due to injury, as the hosts included Dean Bowditch to lead the line, as the ex-MK Dons forward was paired with the experienced Alex Revell up front.

Rovers started the game with an urgency to get on the front foot and looked to impose themselves in various positions in and around the Northampton Town final third. The visitors thought that they have found a way through the Northampton Town defence as a long-ball forward wasn't picked up by the host's defence. The hopeful ball forward was bounced into the path of Billy Bodin, who glanced and the linesman to check to his run was onside and sprinted in pursuit of the ball. The linesman's flag looked glued to his side, only for him to raise his flag when Bodin made contact with the ball - as the in-form forward had the goal at his mercy.

The positive phases of play continued to flow for Rovers and as surging run down the left from Liam Sercombe carved out an opportunity for Rory Gaffney. The industrious midfielder muscled his way past his man before executing an inch-perfect pass with the outside of his foot that curled into the path of Rory Gaffney. The striker took a touch to control the ball and launched a well-struck shot towards goal that was blocked by the outreached arms of Northampton 'keeper Matt Ingram, who was quicky of his line to close down the angle for Gaffney. 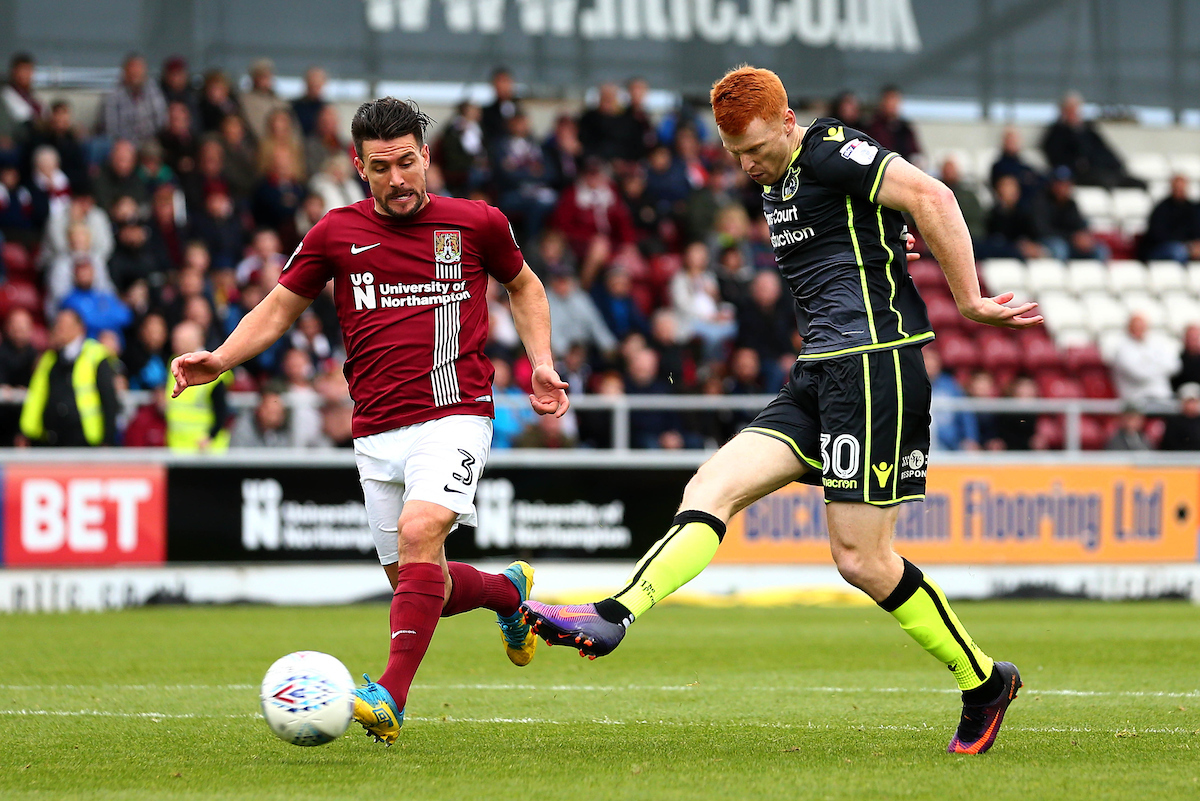 In his first start for the club - debutant Rollin Menayese was involved at both ends of the pitch inside the opening twenty minutes. The defender almost managed to meet a Chris Lines corner inside the Northampton Town area, but a slight deflection took the ball away from the defender as he was preparing to head the ball home. At his more natural end of the pitch, the young defender read a threatening cross from the right by Brendan Moloney and was able to deflect the delivery behind for a corner, with numerous Northampton strikers waiting to apply a close-range finish from Moloney's cross.

Liam Sercombe was enjoying the freedom to surge forward in the heart of the Rovers midfielder and was again on hand with a perfectly executed pass to cut open the Northampton defence. On this occasion, it was Ellis Harrison who benefited from a pass from the outside of Sercombe's boot and the striker advanced towards goal unchallenged. On entering the area, Harrison opened up his body to curl a side-footed effort towards the far-post, but didn't get the direction on his shot he wanted and placed his effort too close to Ingram, who made the save in close to his body.

In a lively first-half performance, Sercombe once again broke forward with the ball at his feet on the half-hour mark and looked to test Matt Ingram from long-range. The midfielder connected well with his strike from twenty-five yards, but a fine diving save from Ingram was enough to push the ball around the post.

Rovers broke with less than ten minutes remaining in the first half with a goal that involved great link-up play between Gaffney and Bodin. Forward Gaffney broke into the area and took a number of defenders with him before picking out Billy Bodin with a squared pass. Bodin took the ball out of his feet and open up a path to goal, as the forward launched a driven right-footed shot that flew across the surface and nestled into the bottom corner. 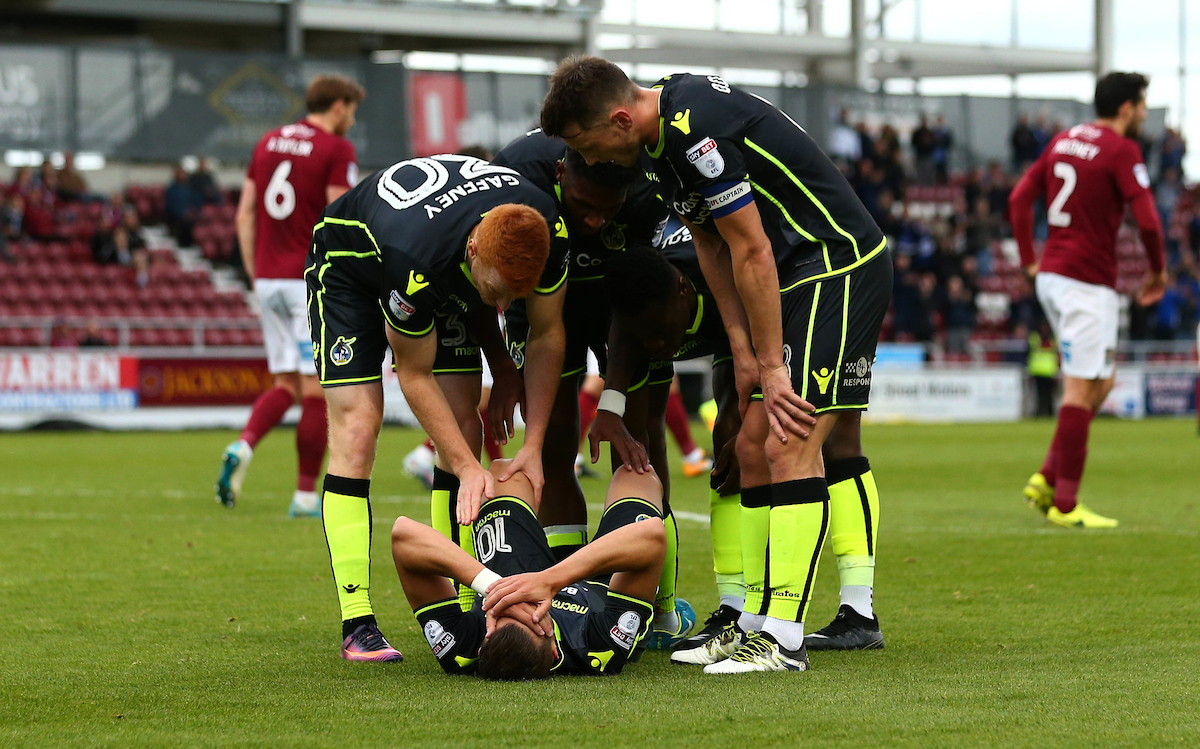 In the delight of taking the lead - there was bad news to come for Rovers, as Bodin suffered an injury in striking the ball that led to the goal that cut the forward's afternoon short.

Tom Nichols was chosen as a like-for-like swap for Bodin, and the striker had an immediate impact on the encounter, as Nichols' tricky footwork inside the box coaxed Alex Revell into making a hurried challenge inside the area that resulted in the referee awarding a penalty.

Nichols picked up the ball and poised himself to take the penalty, in a quest to get off the mark for the club. Opting for placement over power, the striker's penalty was directed low into the bottom left corner, but Matt Ingram guessed the right way and pulled off a save to limit Rovers' advantage to just the one goal heading into the break.

After registering ten shots on goal in the opening forty-five minutes, Rovers look to test Ingram early in the second half, but it was the hosts who registered the first chance of after the break. Alex Revell, who gave away the penalty in the closing stages of the first-half, was the quickest to react to a loose ball on the edge of the Rovers area and unleashed a volley that had Sam Slocombe rushing to his right, but the goalkeeper's urgency was just a precaution, as the striker's effort bounced wide of the goal.

As the game approached the hour mark, Rovers managed to secure the all-important second goal to stretch a healthy two-goal cushion. It was the combination of Sercombe and Harrison who created the goal that sparked celebrations in front of the travelling Rovers supporters. Just as he did throughout the first-half, Sercombe's delivery into the box was accurate and picked out Ellis Harrison, who outjumped the Northampton defence and held is height in the air to glance a header into the top corner for his fifth goal of the season.

Rovers didn't have to wait long for goal number three to arrive, as Ellis Harrison managed to score his sixth goal in his past two encounters with Northampton. If it was Sercombe's assist that made Harrison's first goal then it was fine to work on the edge of the area by the striker to create his second goal, as the Welsh forward skipped past defenders before sending a powerfully struck shot that flew into the bottom corner, with little Ingram could do due to the sheer pace of the shot. 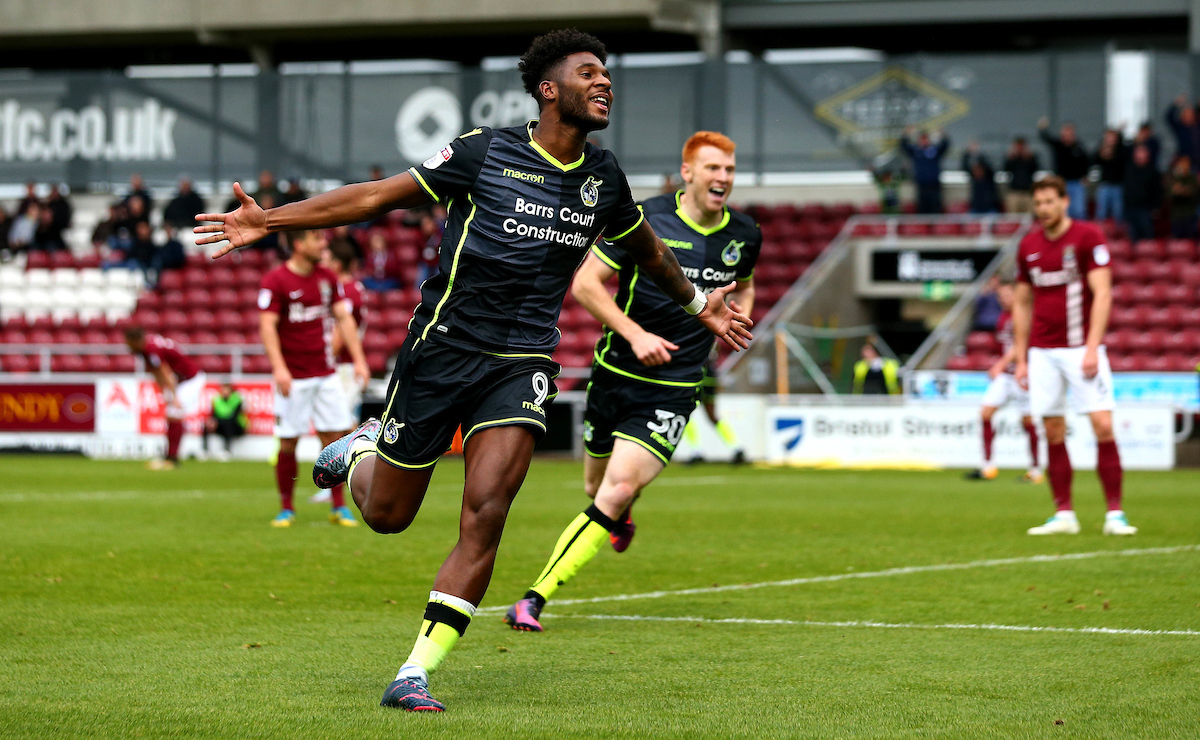 In a frantic second half, there was no pause to the action, but it was a red card that provided the drama, as Alex Revell was dismissed for an elbow on Tom Broadbent that resulted in the defender receiving treatment for a bloody nose on the touchline, as the Northampton Town striker was shown his marching orders.

On his milestone appearance for the Club, it seemed only fitting that Chris Lines should mark the game with a goal and the midfielder almost got his wish, as glancing touch inside the area from Lines deflected the ball towards goal. As time stood still, the midfielder's effort bounced clean back off the post, only for Rory Gaffney to react the quickest, as the striker fired home from close range for his second goal in seven days, following his goal against Plymouth last weekend.

After assisting Ellis for his goal, Liam Sercombe managed to get himself on the scoresheet for Rovers' fifth. An inviting delivery into the box from Tom Nichols hung in the air and was met by Sercombe, who rushed into the box at pace to get on the end of Nichols' cross. Addressing the ball at speed, Sercombe didn't make clean contact with his first-time volley, but midfielder's effort did enough to beat Ingram, as the ball deflected on the crossbar and into the net.

Inside the final ten minutes, Rovers completed the scoring through substitute Dom Telford. The impressive Marc Bola, who was a constant outlet down the left, was able to get deep into the final third and square a pass to Dom Telford, who made no mistake in applying a close-range finish, netting his first EFL goal for Rovers. 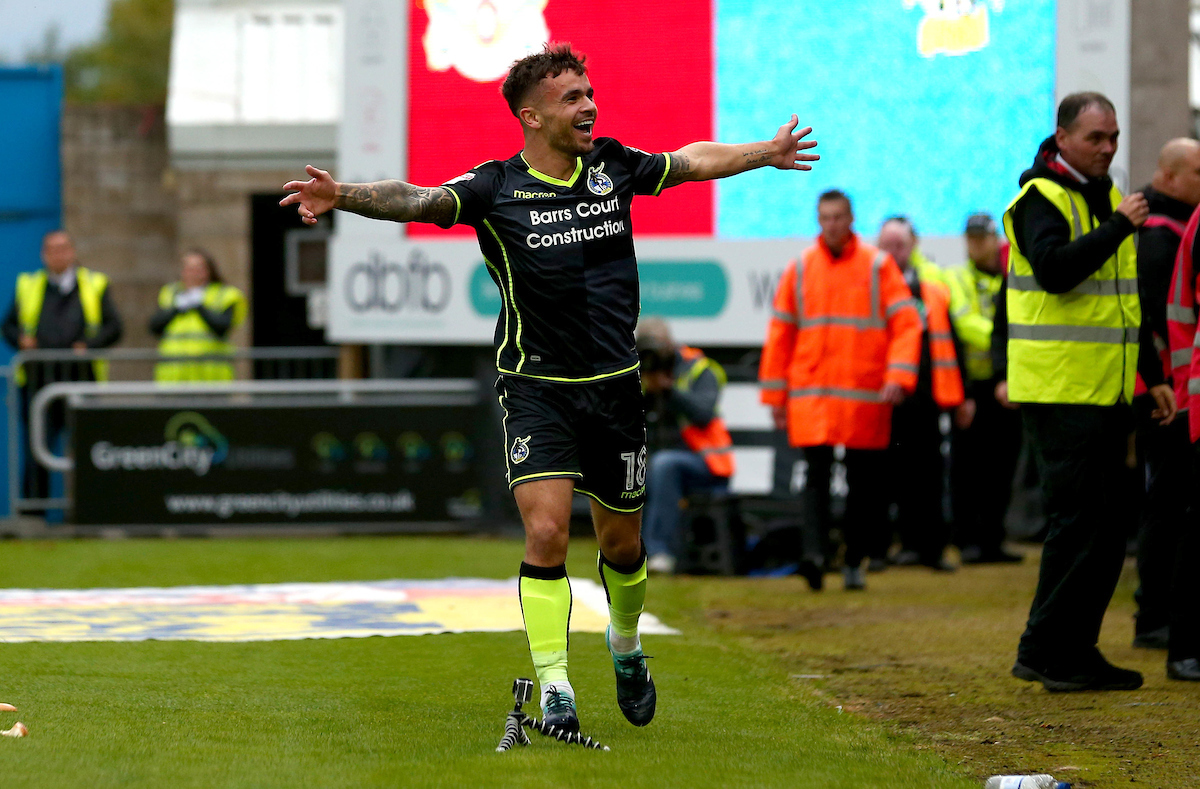