A new book telling the story of one of Bristol Rovers’ greatest ever local heroes has its official launch at The Mem on 14th October before the game against Oxford in the Bristol Room between 1.00 – 2.30 pm.

Fans will not only be able to pick up a copy of Harry Bamford: Bristol Rovers’ First Gentleman of Football for the special price of £10, but also meet some Rovers’ legends. Among those invited are Josser Watling and Howard Radford, the two remaining regulars from the team which won promotion to the Second Division and came within a whisker of reaching the top flight and were renowned FA Cup giant killers, humbling Manchester United among others. Josser’s affectionate and funny Foreword to the book recalls his team mate Harry and the exceptional team spirit of that Fifties side, as well as manager Bert Tann’s obsession with salad.

Also invited is Peter Aitken, whose long service for the club as a player and Community Officer, as well as his status as one of the Ashton Gate Eight, was recognised by his recent nomination by fans to receive the Harry Bamford Memorial Trophy. His presentation is one of 40 celebrated in a separate, full colour section of the book, along with many other Rovers and Bristol City greats and amateur players who have given so much to grass roots football across the West Country.

When Harry Bamford’s eldest daughter Hilary agreed to show Bristol sports enthusiast and writer and fellow Gashead Steve Sutor her father’s schoolboy caps and medals, she had no idea that the result would be the revival of the trophy donated anonymously a few days after her father’s tragic and untimely death aged 38 in a motorcycle accident in 1958 to commemorate his sportsmanship. Steve also suggested that Harry’s life deserved to be told in a book.

Hilary was three when her father was killed and only has fleeting yet happy memories of her doting dad. Researching for the book proved a journey of discovery which was sometimes highly poignant. Using newspaper clippings and photographs, as well as many items of memorabilia collected and preserved by the family which are featured in the lavishly illustrated biography published by Bristol’s Tangent Books, Harry’s story was put together by Hilary with the help of the Bristol based football writer Joyce Woolridge.

Born and bred in St. Philip’s Marsh where his success as a free scoring schoolboy forward attracted much attention, Harry was called up into the Army and sent to the Far East when war broke out. After playing in Army football and rugby teams, the book reveals how Harry was immediately drafted into Brough Fletcher’s Rovers and how he became one of the best right-backs never to win a full England cap in a team comprised largely of locally born men under manager Bert Tann. His obvious talents did win him a place on an extraordinary FA tour of Australia which has its own chapter.

Today, full backs are expected to attack as well as defend, but Harry’s regular forays upfield were far from the norm. His insistence on playing the ball out of defence in even the tightest situation gave fans and managers alike many an anxious moment. In his 486 League appearances, as well as the many other matches he played for Rovers, Harry, the cleanest of tacklers, who would always take the ball and not the man, was never spoken to or had his name taken by a referee.  His sportsmanship was so well known that one obituary dubbed him the first gentleman of football, meaning the foremost gentleman of the game to which he devoted himself.

Hilary had tried to track down the trophy which until 1974 was presented to a footballer, amateur or professional, who best encapsulated the ideals Harry championed and which was thought lost in the 1980 Eastville fire. Steve Sutor in the second part of the book tells how the trophy was rediscovered and how today’s Bristol football fans reunited to nominate and applaud those professionals and amateurs selected to receive the award for its 40 missing years, just as they came together in their thousands in 1958 to mourn the passing of one of Bristol’s Rovers’ finest. 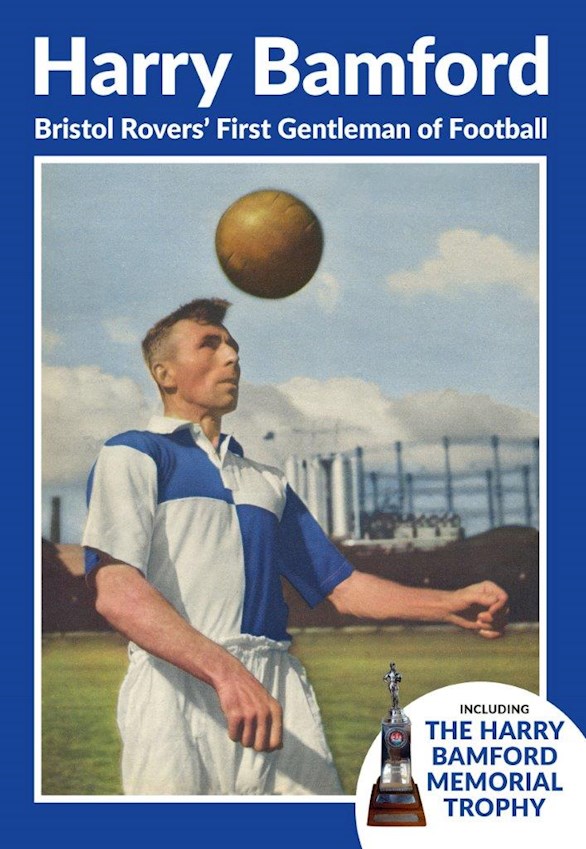