Currently on a wretched run of form Bristol Rovers travel up to Lincolnshire to face a Scunthorpe United team sitting in a Play-Off position and having won their last two league games. Manager Graham Alexander can give Darrell Clarke some hope as the Iron’s leaky defence has conceded just one goal in the last two games.

For a team that has appeared to be solid for the last few years (with a few notable exceptions last season there is a mystery as to why the Gas seems so vulnerable. They will certainly be put to the test this weekend with both Tom Lockyer and Ryan Sweeney on International duty.

As Rovers were enduing the embarrassment of 3 Cup defeats in a row Scunthorpe went out of the EFL Trophy on penalties to Doncaster and last weekend secured a 0-0 draw at Sixfields against a rapidly improving Northampton Town team.

In fact Town were the better team for long periods but without every really threatening the Scunthopre goal and a 0-0 draw always seemed on the cards. The home team struck the woodwork twice in a minute in the first half, Aaron Pierre's header smashed into the crossbar and then Lewis McGugan's sweet free-kick found the post rather than the net.

Pierre had a second header cleared off the line by Lee Novak and at the other end Hakeeb Adelakun squandered Scunthorpe's best opportunity when he shot over.

Speaking after the game Iron boss Alexander said, “We kept a clean sheet for the first time in nine games which was a positive. Defensively, we started the season exceptionally well and it was well documented. They deserved it then and deserved it on Saturday. We defended a lot of set pieces that were all delivered with good quality into dangerous areas. We had to stand up to that.”

“I am pleased with players’ efforts and commitment to the game but we didn’t have enough quality to win the game, I know we want to play better. We had some really good opportunities and got into some productive positions but didn’t have that killer touch. Getting in those positions is good but there were not many chances. However, if you take one of those it could win the game. We need to build on the positives and try and improve on the things we need to do.”

Looking back at the past games between the two clubs have been few and far between as United didn’t gain League status until 1951 and played in the Third Division North until 1958. In their second ever visit to The Old Show Ground; Rovers recorded a stunning 4-3 win with Alfie Biggs, Ray Mabbutt and Ian Hamilton (2) all on the score sheet with Welsh international wing wizard Barrie Thomas (2) and Peter Donnelly replying for the home team.

It was another 13 years and 2 points from a possible 12 (just 2 for a win in those days!) before Rovers recorded their next win in the steel town. A Smash and Grab double (yes Warboys and Bannister as always) kept a 1,784 crowd silent!

During that lean spell Rovers visited the Old Show Ground on 7th November 1964. Rovers had got off to an excellent free scoring start to the season, hitting 4 past Mansfield, Peterborough, Bournemouth, and 5 past Grimsby and Carlisle in consecutive games.

Against Reading on 17th October Alfie Biggs suffered a serious cartilage injury which kept him out for the rest of the season. Rovers came off two wins before their trip to Lincolnshire and an Ian Hamilton goal for Rovers and a Barry Lindsay goal for the home side, gave the teams a share of the points in a hard fought game.

Nearly a year later and it was a different story. Having lost 3-0 at Swansea and 4-3 at Swindon the defence needed to tighten up but it wasn't to be. Without ever looking a good side Scunthorpe won with absurd ease as Rovers defensive marking was virtually non-existent. The attack wasn't much better and when Ian Hamilton put the ball in the net Referee Egan ruled that Dick Plumb had fouled Geoff Sidebottom in the Scunthorpe goal.

Freddie Goodwin gave Scunthorpe a 25th minute lead with an unchallenged header and then five minutes into the second half Brian Bedford was given equal largesse. Frank Barton sealed the game with a hooked shot just seven minutes later to complete a 3-0 victory. 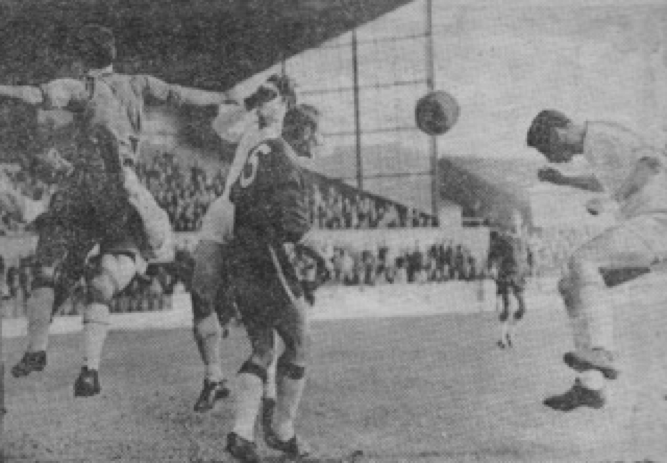 Freddie Goodwin heads the first goal in Scunthorpe’s 3-0 win over Rovers on 16 October 1965. 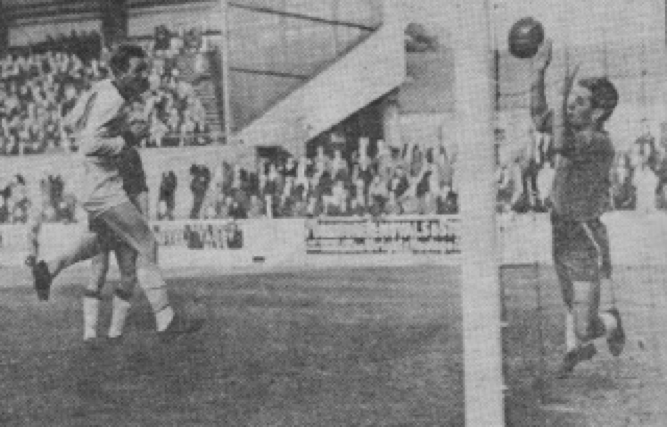 Brian Bedford’s header puts Scunthorpe 2-0 up in the same game. 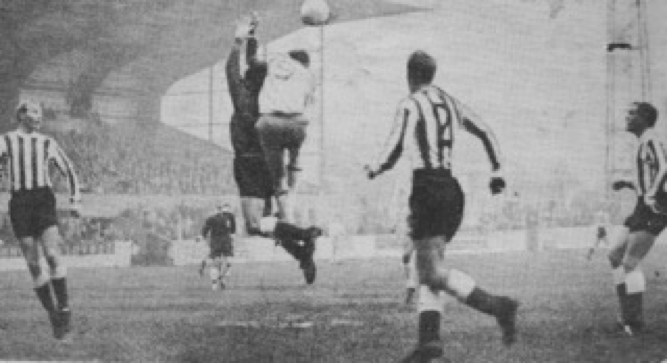 Ian Lather and Bernard Hall miss the ball during the 1-1 draw at the Old Show Ground on 24 October 1966.

In 2004-05 season, the Iron ran out winners at a canter, 3-0 with Hayes (2) and Torpey on the scoresheet in Bristol and 4-0 in Lincolnshire. In their final home game of the season Scunthorpe needed a win to keep their hopes of automatic promotion alive. It was a whitewash for the hosts, who then went on to gain the point they needed at Gay Meadow, Shrewsbury the following week. Steve Torpey grabbed a brace within the first 14 minutes to get the ball rolling, producing two pin-pointed back headers which bounced into the net in front of a very strong crowd behind the goal.

That was the end of the goals for the first half, but it took just 46 seconds of the second half to add to the scoring. After a long Paul Musselwhite goal kick, Hayes found himself in the clear, with the Iron striker sending a side-footed lob over Ryan Clarke in Rovers goal.

A dampener hit the game seven minutes later though, as Richard Kell was stretchered off with a broken leg, which saw the Pirates’ Craig Disley dismissed for a second bookable offence by referee Scott Mathieson. The win was completed in the 69th minute though; Rovers cleared a corner to the edge of the area, but it was sent back in with vengeance, Cleveland Taylor heading home from 20 yards as the ball looped into the goal to the delight of the fans to secure a 4-0 home win.

Alexander is keen to see his team in action at home again, “We’ve had three away games in three different competitions. Peterborough was the last home match and it does seem a little while ago, but it was only three weeks.”

“We’re looking to continue on from that victory and carry on our league form, really cementing ourselves up at the top end of the table. We have a tough challenge on Saturday against Bristol Rovers, and we have to be ready for them. We want to put on a performance that puts them on the backfoot though.