Rovers and their Forest Green counterparts couldn’t be separated after 120 minutes of open play after they had traded first half goals in the space of three first half minutes.

Although Rovers enjoyed a great deal of possession throughout the game, they were unable to find another goal and the game went to a penalty shootout where goalkeeper Liam Armstrong was the hero, saving three of the four Forest Green penalties to help the youth side progress in the competition. 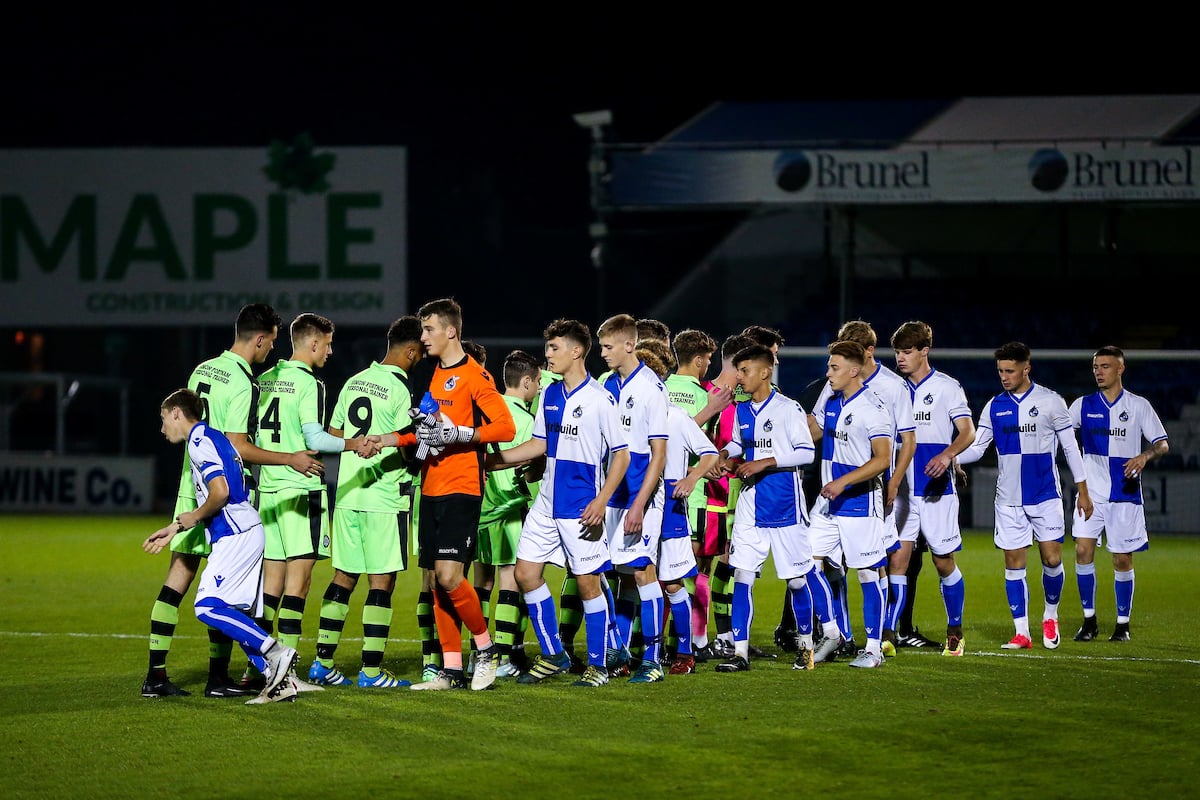 Josh Bailey and Lucas Tomlinson scored while Josh Brace saw his spot kick saved leaving Tom Mehew to score penalty number four to ensure that they go through to the next round where they face an away tie against either Oxford United or Gloucester City.

After a lively opening, Rovers forced the first opportunity of the evening, after ten minutes, when Josh Bailey’s powerful header from a Jordan Carey corner was headed off the line.

Rovers went on to enjoy a great deal of possession and fashioned another opportunity just after the quarter of an hour mark when James Spruce met Lucas Tomlinson’s ball into the box but directed his header just wide of the target.

The visitors, who had been pegged back in their own half for much of the time, created their first opportunity on 26 minutes when goalkeeper Declan Lehman picked out the run of Lewis Spurrier down the right. He got in behind his marker and fired an angled drive just wide of the upright.

Almost immediately Rovers were on the offensive and at the end of a flowing move down the right Josh Brace, with only Lehman to beat, hit his shot over the bar.

Rovers took the lead their play deserved in the 34th minute, when a break down the left sae Brace play a low ball into the near post and skipper Jordan Carey forced the ball home from close range.

Rovers held their lead for just three minutes, though and when Josh Bailey was adjudged to have fouled Taylor Marsh in the area Jordan Stevens stepped up to confidently beat Liam Armstrong with the resulting spot kick.

Spruce again went close for Rovers as the half drew to a close, firing just over the bar following Carey’s ball in from the left.

After a quiet start to the second half Tom Mehew headed wide from a corner and just after the hour mark Rovers again went close to regaining the lead. A superb diagonal ball from Alfie Clarke picked out substitute Harrison Chamberlain on the right and he, in turn, found Spruce who saw his shot drift just past the upright.

With Rovers in the ascendancy they again went close when Chamberlain got on the end of a ball in from the right by Brace but he was foiled by a superb block by William Turner.

Spruce was then denied by William Davidson, who somehow managed to block his goalbound effort.

In a rare counter attack by the visitor's goalkeeper Liam Armstrong thwarted Jay Malshanskyj when he rushed off his line to smother the ball at the striker’s feet.

With no one able to break the deadlock, the game went into extra time and Stevens squandered an opportunity to give the visitors the lead straight from the restart but he ballooned a free kick high over the bar.

The same player then became the first player to pick up a booking for his late challenge on Tom Mehew.

Spruce hit another effort over the bar as the first half of extra time drew to a close but there was still time for Jesse Mansaray to try his luck at the other end, though his shot was safely gathered by Armstrong.

Tomlinson hit a shot wide at the start of the second period of extra time, while Spurrier’s effort at the other end cleared the Rovers crossbar.

As the clock ran down Stevens tried his luck with a long range effort that was comfortably dealt with by Armstrong while at the other end an angled from Spruce was blocked by a packed defence.