This season’s issue is packed full of news and views from an eclectic mix of contributors, all writing about Bristol Rovers and those articles sit side by side with a wide range of articles on club matters.

In Saturday’s programme, for our game against Doncaster Rovers, manager Darrell Clarke pens his own notes, and we have two match reports from our U-18 side, together with a selection of team photos from some of our Academy sides. In addition, we feature a profile of First Year Scholar Lucas Tomlinson.

Don’t forget our extensive historical section, either, as this week we take a look back at December 2008 when there was transfer speculation linking Rickie Lambert with Bolton Wanderers and Rovers were booed off the Memorial Stadium pitch following a 2-1 defeat at the hands of MK Dons.

Also, catch Stephen Byrne’s Rovers’ Miscellany, an article in which he looks at Rovers matches on Christmas Day over the years.

In addition we carry interviews with Daniel Leadbitter and Ryan Broom, while it’s Tom Broadbent’s turn to be the dressing room DJ in this week’s edition of Pirate Sounds, brought to you by Lance Cook.

The Pirate is available from the club shop and sellers around the stadium and still only £3.00; why not purchase a copy this weekend and see what you think? 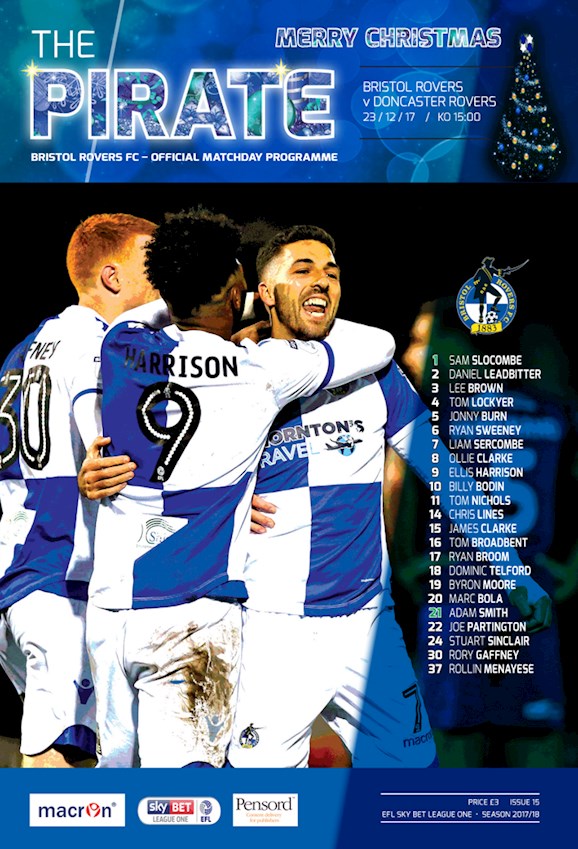