In a lively opening ten minutes, Dayle Southwell headed the hosts in front just five minutes into the encounter at Adams Park, converting from close-range following a corner from the left.

Wycombe's lead lasted just four minutes, as a fine individual goal from Dominic Telford leveled the scores in the ninth minute, as the striker ended a purposeful run with a well-executed finish for his first Rovers goal.

The striker didn't have to wait long for his second goal, as Telford rose to meet a Ryan Broom cross just minutes before the break to put Rovers in front heading into the break.

It was Ryan Broom who extended Rovers' lead ten minutes into the second half, with the Welsh winger also on the scoresheet for the first time for the club, with Liam Sercombe scoring Rovers' fourth with well-struck long-range effort on the hour mark.

Broom completed the scoring in the 86th minute, with a carbon copy of his first goal, converting a Dominic Telford cross to allow Rovers to register a fourth victory on the bounce.

In the build-up to the encounter, Rovers made six changes for the tie. Dominic Telford came into the starting XI for this first start, while Ryan Broom, Byron Moore, Marc Bola, Tom Broadbent and Jonny Burn all came in the line-up for the game at Adams Park.

The hosts in turn also made six changes, with new signing Josh Umerah included in Gareth Ainsworth's side following his arrival on loan from Charlton Athletic.

During the opening exchanges, it was the Rovers defence that had to be alert to an early threat from the hosts, as Josh Umerah forged his way into the Rovers area and managed to adjust his body to get a shot away, but Tom Broadbent cover ground quickly to use his body to deflect the ball behind for an early corner.

It was from an early corner that Wycombe managed to take the lead, as delivery from the left was met by Marcus Bean, who unchallenged was able to direct the cross back towards goal where Dayle Southwell was on hand to force home a header from close-range in just the fifth minute.

Rovers managed to find an equaliser in their first venture into the Wycombe box, as a winding run from Dominic Telford saw the striker enter the area and evade numerous challenges, managing to keep his balance, before slotting a finish past Scott Brown to level the scores just four minutes after Southwell's opening goal.

Marc Bola's pace carved open an opportunity for Rovers to take the lead, as the left-back burst down the wing to deliver a driven cross that found Rory Gaffney, with the striker battling to gain possession before firing a right-footed effort well over the crossbar from inside the box with just Scott Brown in the Wycombe goal to beat.

After the frantic opening period, the Rovers defence was tested on the half hour mark, after a quick turn of pace from Michael Harriman saw the defender break to the byline and create space to direct a low-cross into a dangerous position which took an unfortunate deflection from Tom Broadbent that deflected the ball away from Sam Slocombe. Luckily for Rovers and Broadbent, intelligent positional play from Jonny Burn saw the centre-back in the right place to clear the ball off the line and away from danger.

Wycombe continued to create chances, as debutant Umerah took advantage of space inside the area to fire a powerfully struck shot that required Sam Slocombe to make a save, with the 'keeper quick off his line to close down the angle. From the resulting corner, the striker rose the highest and headed forcefully towards goal, but Slocombe was equal to the effort and saved comfortably.

Five minutes before the break Rovers took the lead for the first time, as a teasing cross from the right from Ryan Broom found Dominic Telford, with the striker opting for a placed header, rather than a power, with his effort squeezing into the corner of the net, out of the reach of the diving Scott Brown.

Following the interval, a long-range volley from Liam Sercombe momentarily worried Scott Brown, as the midfielder's hastily hit effort looked like it may have caught the Wycombe 'keeper off his line, but the shot bounced narrowly wide of the post from thirty yards out.

Rovers extended their lead in the fifty-fifth minute, as a low, driven cross from the right from Joe Partington alluded the Wycombe defence, with the ball running all the way to the far-post where Ryan Broom was waiting to tap home the simplest of finishes in front of the traveling Rovers supporters.

With Rovers taking firm control of the game, against the run of the play the hosts squandered a rare opportunity on goal, as Dayle Southwell broke in behind the Rovers defence and with a clear sight of goal, the forward could only push his effort wide of the target.

As the hour mark passed, Rovers continued their dominance and were rewarded with a fourth goal courtesy of Liam Sercombe, with the midfielder taking advantage of a lapse clearance from substitute Anthony Stewart to hone a long-range effort into the top corner from twenty-five yards.

Sercombe's goal was quickly followed by a well-worked move down the right by the midfielder, who slotted Byron Moore through on goal. The winger kept his composure as he neared goal and was able to slide a finish underneath the advancing Brown, only for his effort to bounce back off the inside of the post and back in the grateful clutch of the Wycombe 'keeper.

With twenty minutes remaining, youngster Luke Russe was introduced from the bench for his debut, replacing Byron Moore. The home side thought that they had reduced the deficit when Anthony Stewart headed into the net from a corner, but the substitute's goal was quickly ruled out for offside. 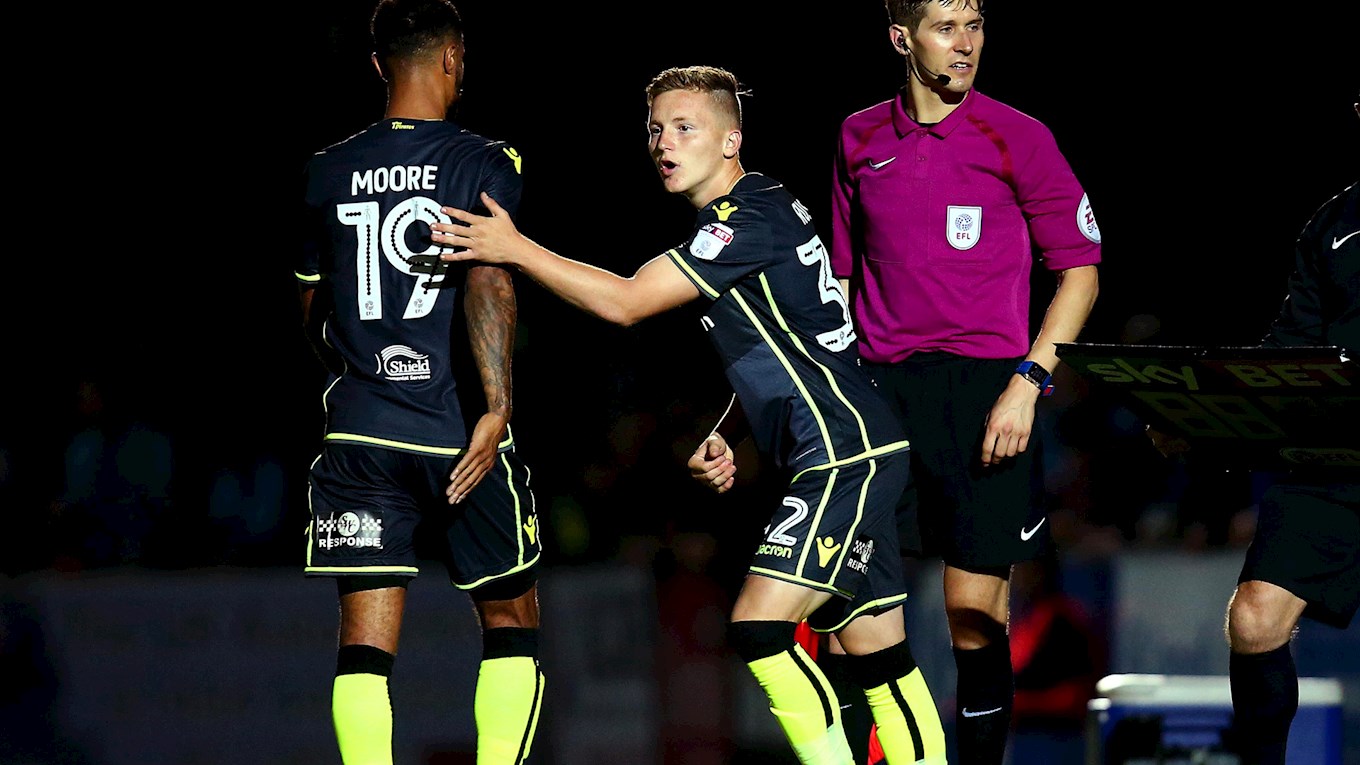 In the closing stages, both Rollin Menayese and Cameron Hargreaves entered the fray to make their first team debuts.

There was still time for Broom to add a fifth goal for Rovers, with Dominic Telford providing the cross for the winger to poke home from close-range, with the goal reminiscent of his first strike, topping off clinical second half display for Rovers