First-half goals from Stuart Sinclair and Billy Bodin and second half strike from substitute Ellis Harrison allowed Rovers to register their first league home win of the season against Fleetwood Town, ending the visitor's unbeaten start to the campaign.

Sinclair opened the scoring just before the half-hour mark, finishing a fine corner routine with a powerfully struck finish from close-range, scoring his first goal since Rovers' victory at the Kassam Stadium back in March.

Rovers' second goal came at the perfect time, just before the half-time break, as Billy Bodin produced a fine individual goal from twenty-five yards out, scoring his third goal in seven days in the process.

The visitors pulled a goal back on the hour, with Devante Cole ushering home a cross from Ashely Hunter, but substitute Ellis Harrison restored Rovers' two-goal advantage with a close-range finish in the 79th minute, as Rovers secured all three points on offer.

Leading up to the game, Manager Darrell Clarke made four changes from the side that started Tuesday's fixture at Craven Cottage, with Ollie Clarke, Joe Partington, Rory Gaffney and Tom Nichols all returning to the starting XI.

The visitors were unchanged from their 2-0 victory over AFC Wimbledon last weekend, with AFC Bournemouth loanee Baily Cargill named on the bench following his arrival at Highbury on a season-long loan earlier in the month.

During the opening exchanges, it was Rovers that registered who registered the first shot on target, as a neat interchange between Rory Gaffney and Billy Bodin opening up the opportunity for Bodin to launch a left-footed shot towards goal that reached Alex Cairnes at a comfortable height to save.

Rovers had the best of the chances in the opening ten minutes, as a break down the right from Billy Bodin allowed the forward to feed the ball to Joe Partington in an advanced position, with the right-back delivering a measured side-footed pass across that face of goal that found Rory Gaffney, but as the striker took a touch to take the pace off the ball, the visitors hastily cleared the danger, just as Gaffney poised himself to volley home from close-range.

After a lull in the game, the deadlock was broken in the 25th minute, as a corner routine that involved Billy Bodin and Tom Nichols, saw the ball played to Joe Partington, with the defender delivering a deep cross to the far-post from Joe Partington that was squared back across goal by Rory Gaffney, where Stuart Sinclair was on hand to attack the ball and drive home a finish that gave Ales Cairns little chance of making a save to deny the midfielder. 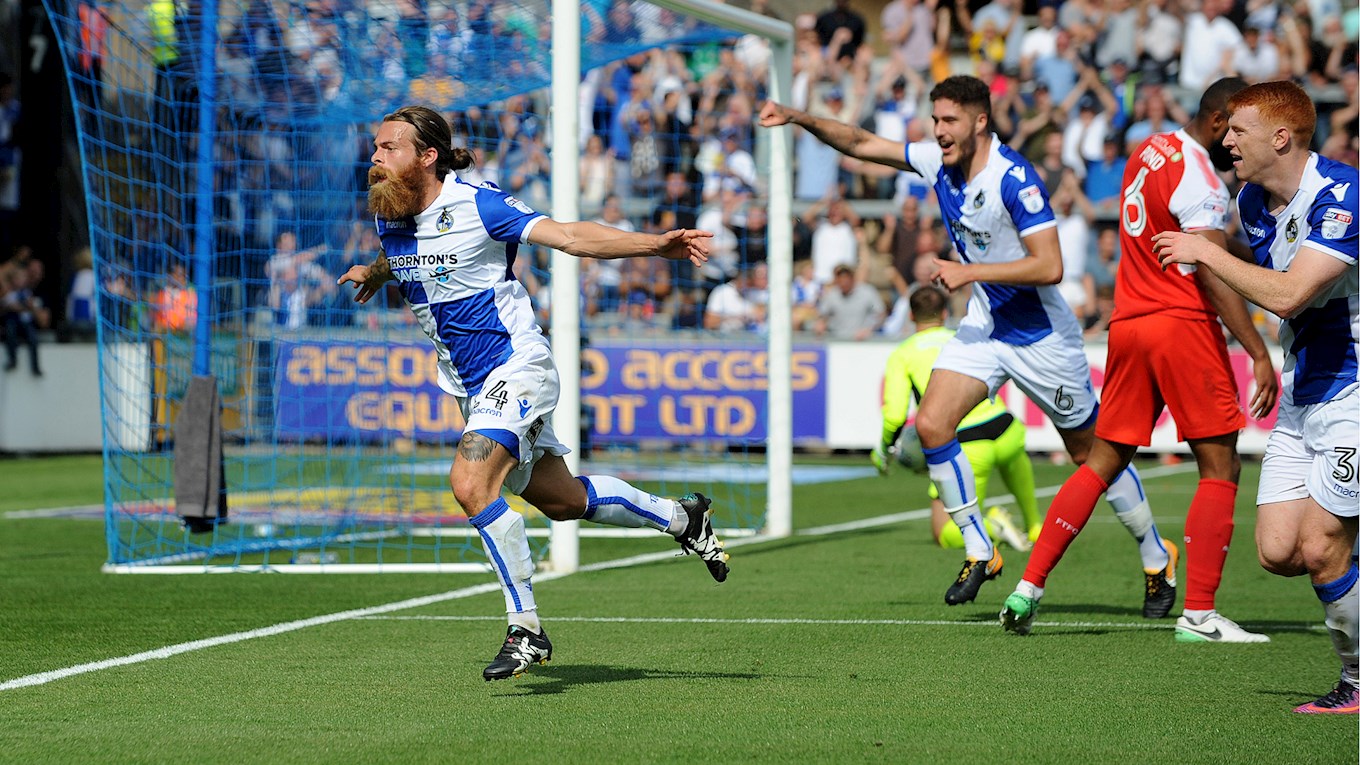 Sinclair's afternoon was over just four minutes after he opened the scoring, as the midfielder's game was ended due to an injury, as Chris Lines was called on as a like-for-like replacement in the heart of the Rovers midfield.

There was an anxious moment for the home side as Devante Cole took advantage of a heavy touch from 'keeper Sam Slocombe, but the striker, in turn, took a slightly worse touch when attempting to round the Rovers 'keeper which allowed Slocombe to gather the loose ball and ease the danger.

Slocombe was required to make his first save of the afternoon just ten minutes before the half-time break, as Devante Cole broke into the Rovers penalty area and looked to test the 'keeper from a tight angle, with his powerful effort aimed towards the target, but Slocombe stood tall and made a reaction save with feet to deflect the ball away to safety.

Rovers managed to grab an all important second goal with minutes of the first-half remaining, as Billy Bodin drifted infield and unleashed a perfectly struck left footed shot that darted into the bottom corner of the net from twenty-five yards, with the forward's shot clipping the post on its way past the fully stretched Alex Cairns. During the interval, Fleetwood opted to make an attack-minded change, introducing Ashley Hunter, at the expense of Bobby Grant.

The first opportunity of the second half fell to the substitute Hunter, who picked up a loose ball following a Fleetwood corner and dribbled into the area, but after creating a shooting opportunity, Hunter could only fire his left-footed shot into the side netting.

After withstanding a period of pressure from the visitors, Chris Lines provided the perfect outlet for the home side, as a well-weighted cross-field ball from the midfielder ran into the path of Billy Bodin, but as the forward took an uncharacteristic heavy touch, the ball ran away from goal, as Amari'i Bell closed Bodin and was able to snatch possession off the goalscorer.

It was another set-piece that led to Rovers creating a chance to extend their lead further, with a delivery into the penalty area from Lee Brown's whipped corner finding Tom Lockyer who connected well with a header, but the defender's effort flashed past the left-hand post with Cairns seemingly beaten.

On the hour mark, the visitors managed to pull a goal back, as a swinging cross from the right was touched towards goal by Devante Cole, with the close-range finishing beating Slocombe for pace after the striker had exploited space in between Ryan Sweeney and Joe Partington to beat the Rovers defence to the cross.

Rovers had to be alert to the attacking trio of Hunter, Burns, and Cole and it was goalscorer Cole that registered a chance for Fleetwood to score an equaliser midway through the second half, with the striker curling a driven effort towards goal that forced Sam Slocombe into making a diving save to his left that was enough to push Cole's wide of the target.

The home side secured the victory with a little over ten minutes left in the game, as a Joe Partington cross from the right found Ellis Harrison and the striker managed to find space in the congested area and was able to provide a neat touch that helped the ball into the net from close-range.

The striker followed up his goal with a forcefully hit long-range effort that required Alex Cairns into making a save, tipping the striker's effort over the crossbar.

There was a late chance for Ollie Clarke to open his account for the season, but after the midfielder had been played through on goal, a covering challenge inside the area from Cian Bolger prevented Clarke from aiming towards goal.

Next up for Rovers is a visit to Wycombe Wanderers on Tuesday evening in Rovers' opening game of this season's Checkatrade Trophy.