Rovers travel to Northampton Town on Saturday afternoon with promotion firmly on the radar. Two wins in a week at The Mem, against Harrogate and Colchester, have propelled the Gas into seventh spot and a visit to the side currently in second spot certainly whets the appetite.

Joey Barton has said that everyone is champing at the bit to be involved in the closing stages of the league season.

"When you’re in such a good run of form, the team unfolds along that run and competition for jerseys right across the season has been very interesting to watch.

But as you’re getting into the closing stages and the final stretch now, the lads are making it very easy for team selection due to the results, performances and clean sheets, and long may that continue.

We know there are nine games to go and lots of teams are scrapping away and everybody in this division so far has been hugely competitive. Every match we’ve had since the campaign started. 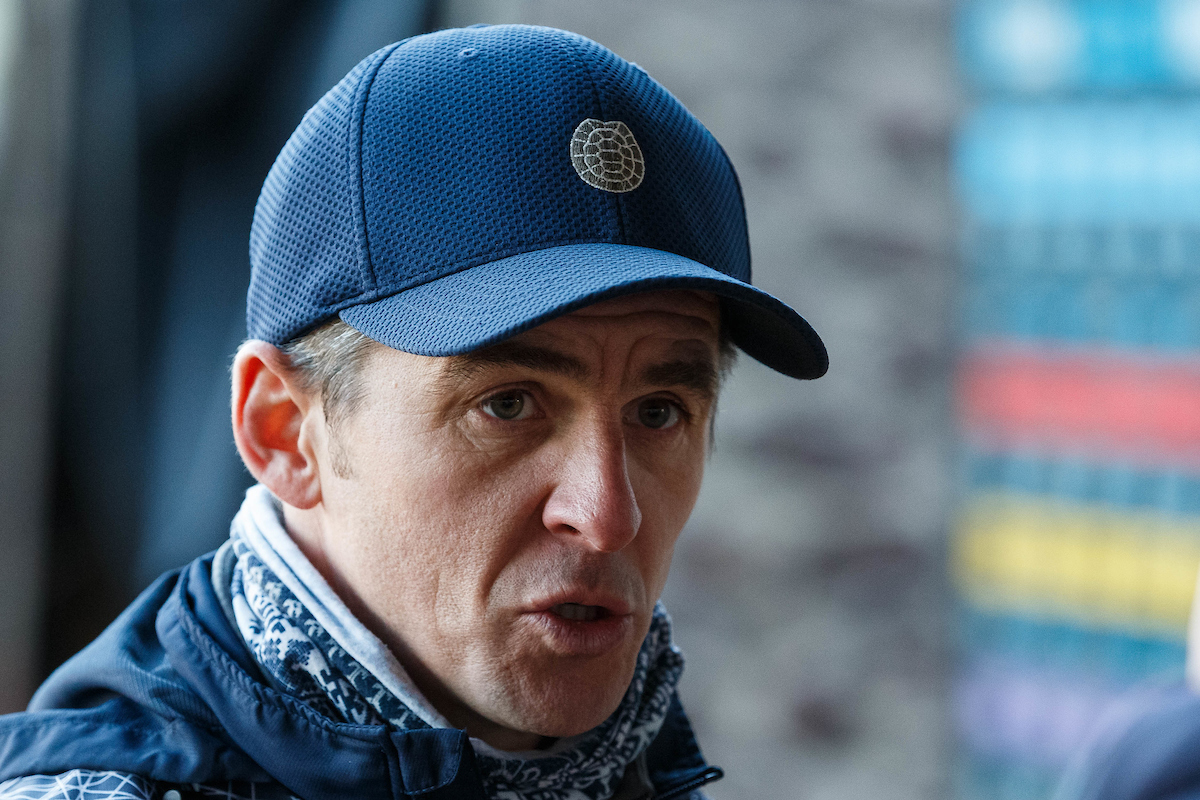 I do feel it is setting up the league table for an exciting end for the neutral. From our perspective, we’ve got to keep doing what we’re doing, keep turning up for each other.

There are going to be lots of twists and turns between now and the end of the season and we’ve just got to make sure in every match situation we take maximum points, just what the lads have been doing since the turn of the year.

At Northampton tomorrow, we get an opportunity to leapfrog or go level with teams who are very close in the table, but if you win on Saturday you’re not promoted, and equally, if you lose Saturday your season is not over.

It’s all to play for, but again for us, nothing changes. It is a top-end-of-the-table clash now. The table is so compact behind Forest Green, who are out in front and we’ve got to make sure we turn up and give a great account of ourselves."

Click to watch our 2-1 win over Northampton in November. 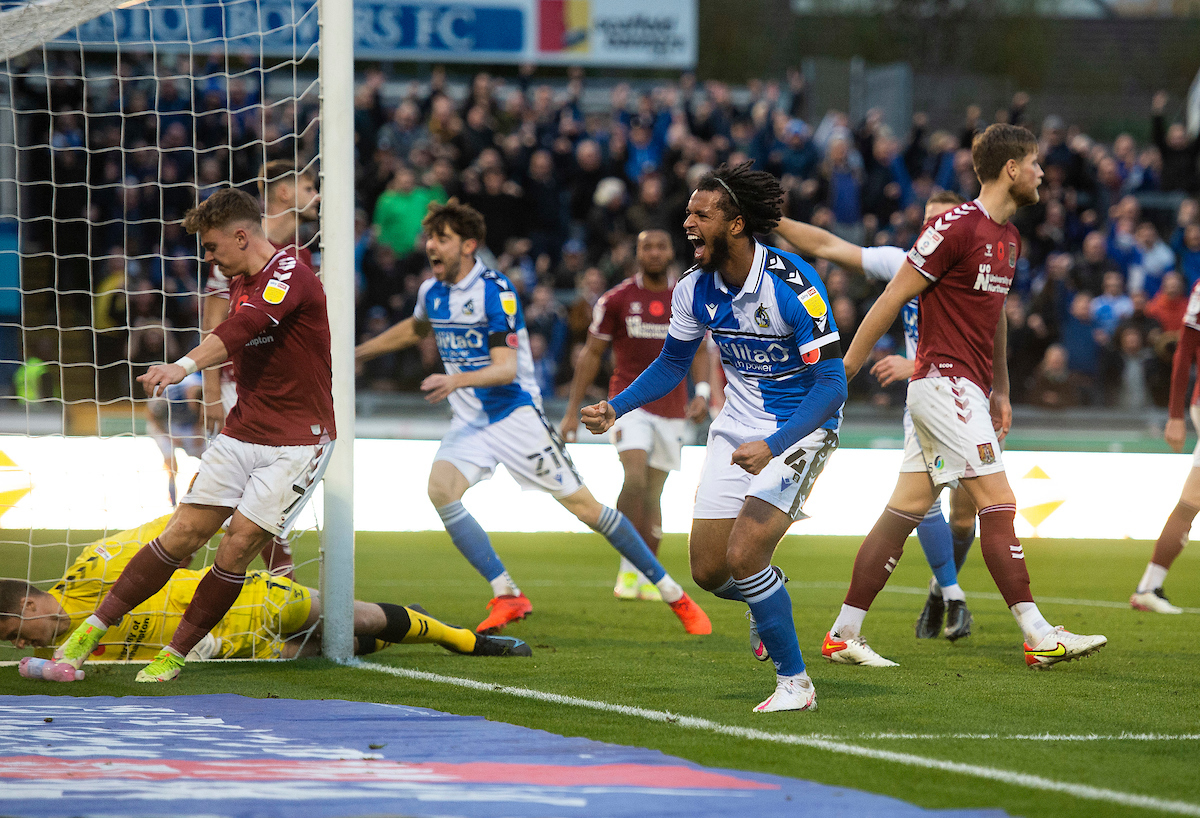 Saturday's hosts currently sit in 2nd place in the League Two standings with a 63-point return from their 37 games this season. In their last five outings, the Cobblers have won two, lost two and drawn one. Their last match was a 2-1 away win at Stevenage, which proved to be the last match in charge for ex-Rovers boss Paul Tisdale.

Oliver Langford has been appointed as the match official for Saturday's clash at Sixfields. In League Two this season, Langford has officiated 3 games, where he has shown eight yellow cards and a single red card. Overall this season, he has taken charge of 30 matches and shown 120 yellow and two reds. 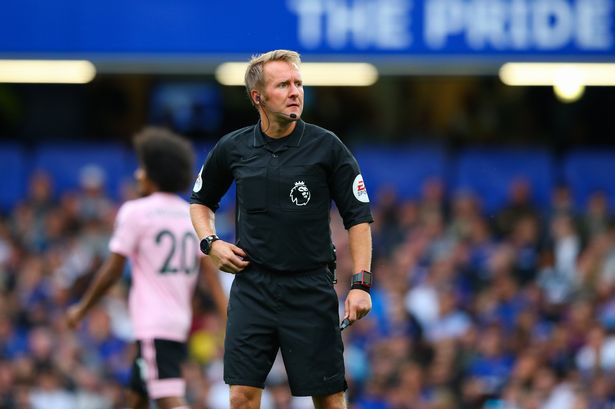 EFL sponsors, Sky Bet have priced Rovers at 2/1 for the away win on Saturday afternoon, with their hosts priced at 11/8. Rovers can also be backed at 14/1 to win the game 3-0. On the goalscorer markets, Aaron Collins is priced at 5/1 to open the scoring. 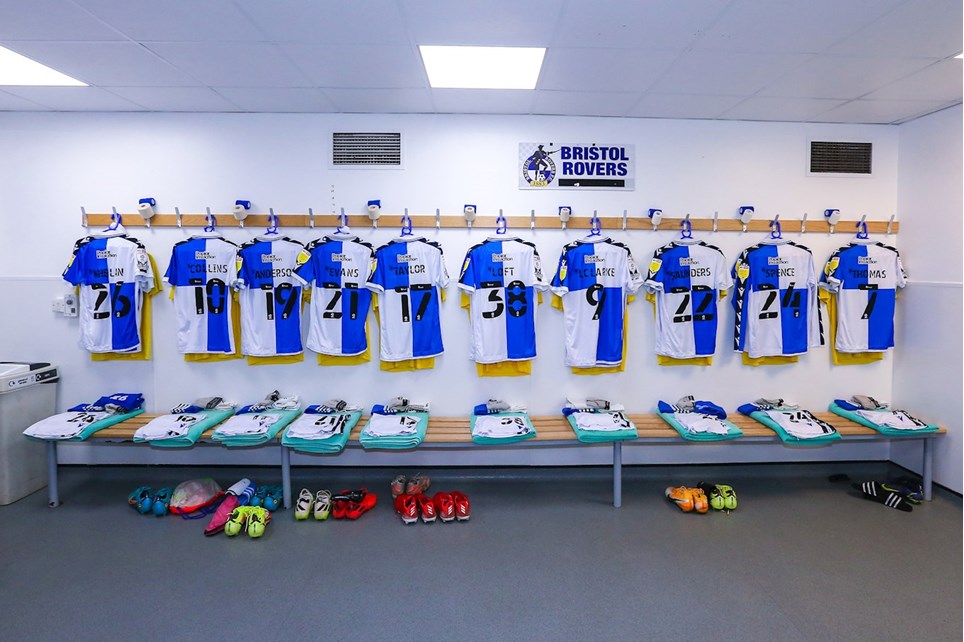 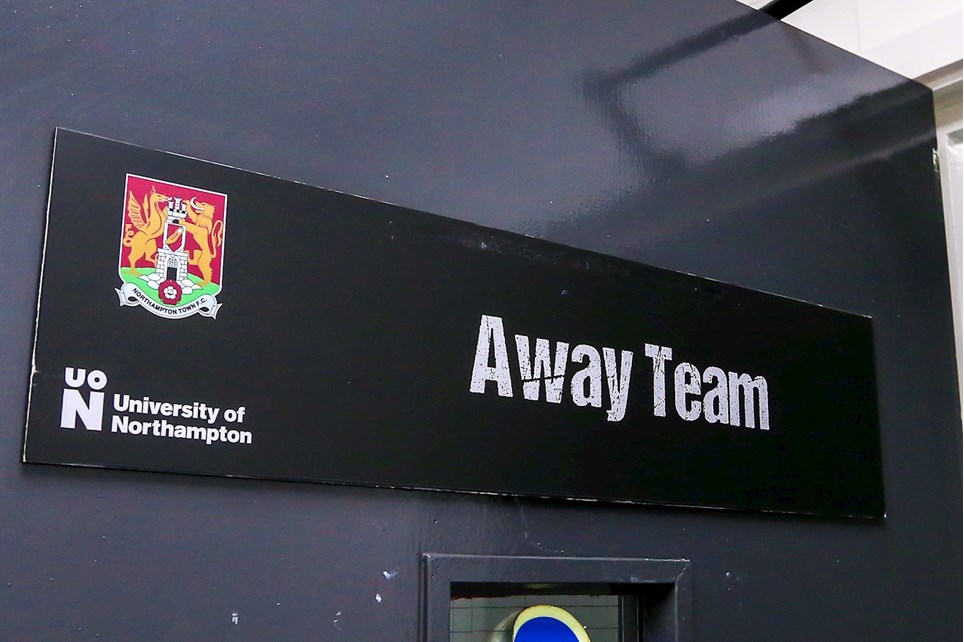 
Rovers are unchanged once again for today's clash with Northampton Town!

Rovers went fourth in the table with a first-minute Harry Anderson goal proving the difference at Sixfields.

Rovers had been able to name an unchanged starting XI for the fourth consecutive game. The only change in the matchday squad comes in the form of Leon Clarke who replaced Luke Thomas on the Gas bench. 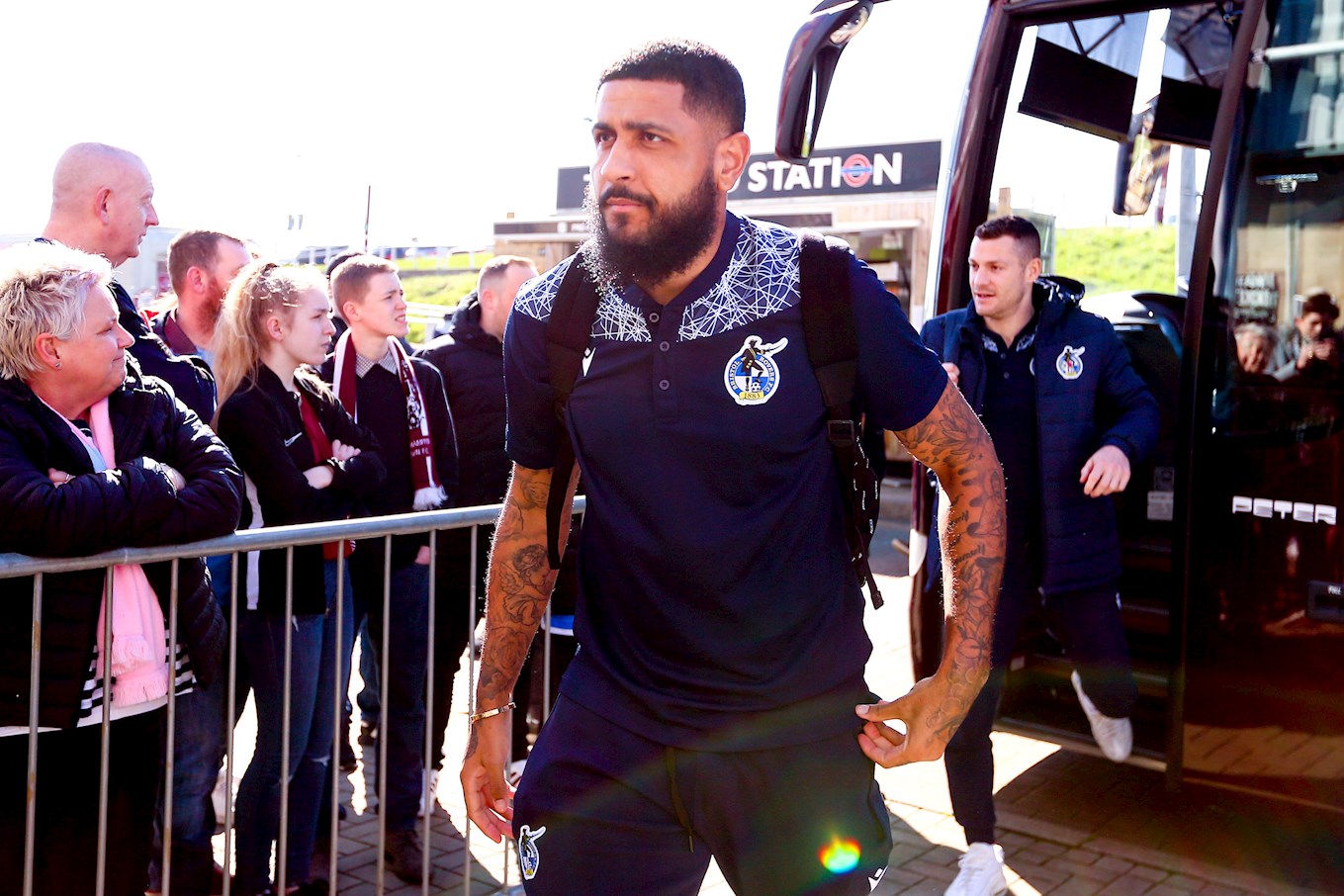 The Gas were in dreamland after 38 seconds at Sixfields as Anderson latched onto a dreadful backpass to fire the Gas ahead. Culprit Jon Guthrie could only watch in horror as Anderson showed composure from a tight angle to slide the ball past Liam Roberts give the visitors the lead. 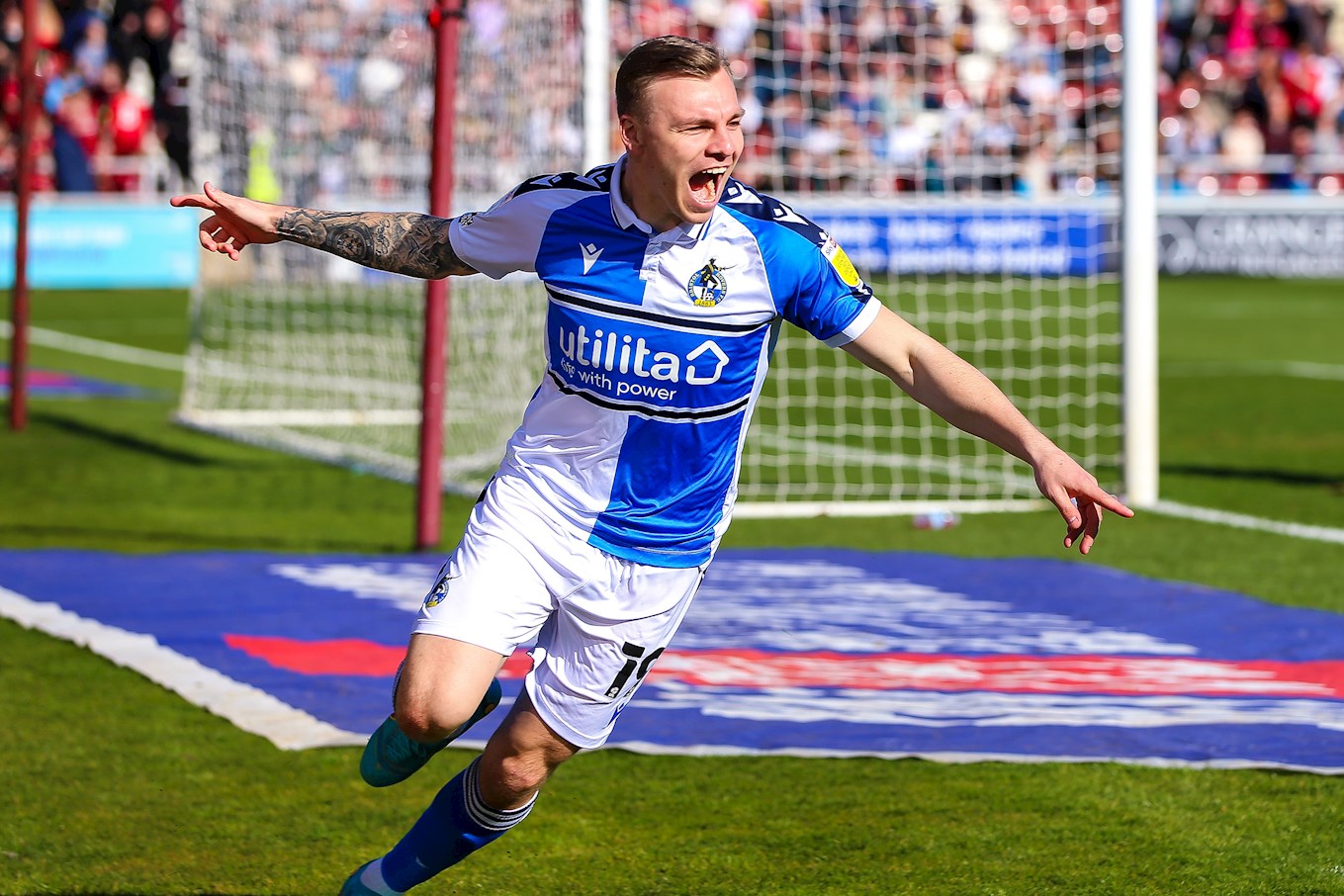 The wind was as blustery as the sun was bright and Rovers were enjoying some early dominance with the ball that their flying start afforded them. In the 15th minute, there was a long stoppage as Northampton's Magloire, who had been penalised for a foul on Finley, fell awkwardly and needed oxygen, before being stretchered off.

The game resumed with a Gas free-kick, which Evans took short to Coutts, who found Elliot Anderson, but the referee blew as he looked to shoot. A minute later, Evans jinked his way to the byline but ran out of pitch before he could cross. The midfielder then gave away a free-kick for a push but the Cobblers couldn't capitalise.

James Belshaw almost provided an assist in the 24th minute as he raced from his box to clear, finding Harry Anderson free down the middle, but his touch just let him down and Horsfall cleared. Hoskins headed over for Northampton in the 25th minute and the hosts were soon back on the attack as Guthrie crashed a header onto the bar from a Hoskins free-kick. A narrow escape for the Gas, but they approached the half-hour mark a goal to the good.

Northampton were beginning to find some rhythm and Connolly was forced to head clear from a teasing Pinnock cross in the 31st minute. A Coutts pass was intercepted but Taylor read the danger well to clear. Referee Langford was having to contend with a lot of niggly fouls from both teams as the play stuttered from box to box.

Lewis thought he'd equalised in the 39th minute, but a flying Belshaw had other ideas, tipping acrobatically over. Finley then won a corner at the other end, with Coutts header being deflected behind for another. from it, Elliot Anderson ran past two defenders into the box, but his cross was cleared for a third corner. Finally, Northampton were able to clear their lines, with the Gas threatening a second. 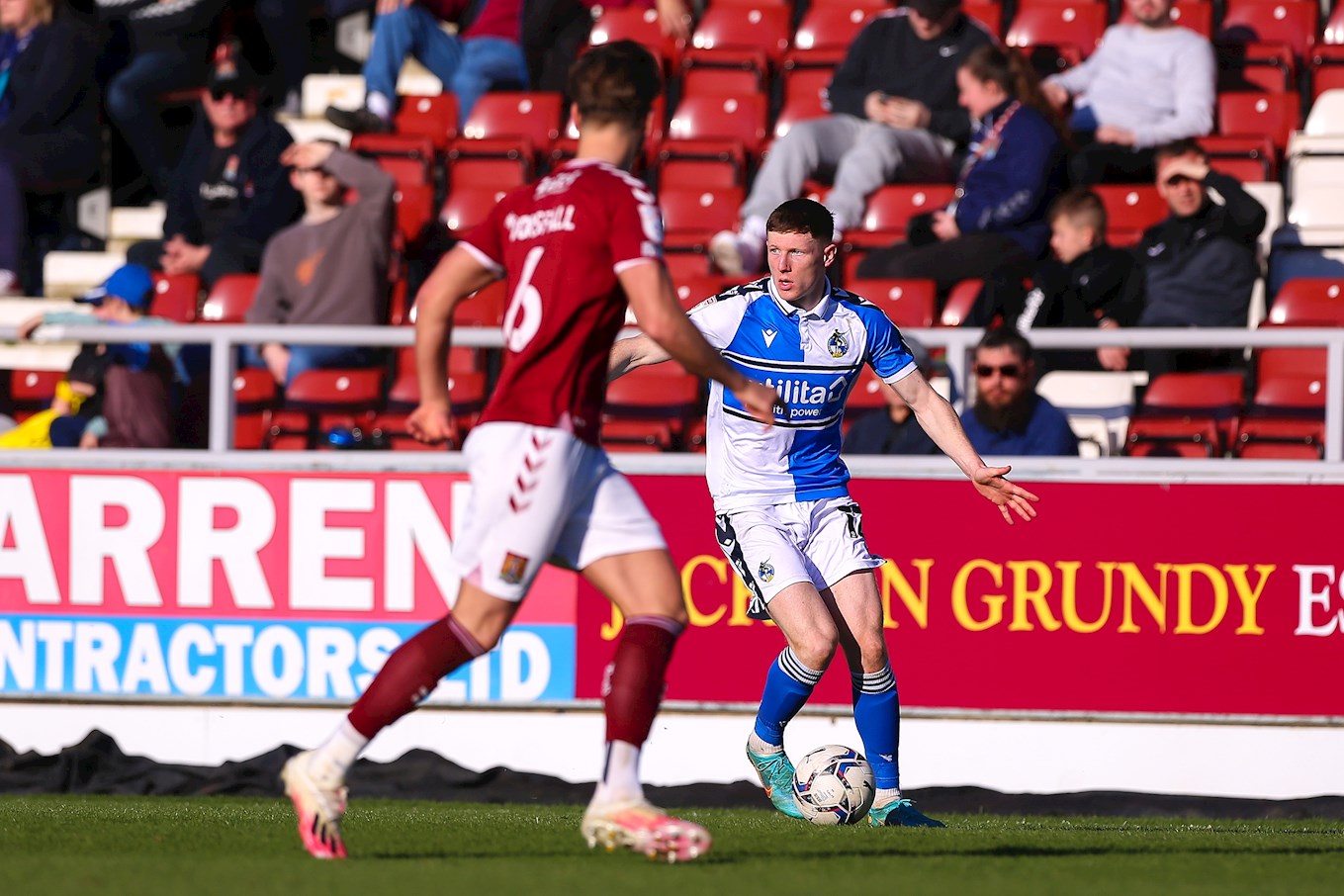 The home fans were getting agitated at every decision that went against them as Rovers safely navigated their way to the interval with their lead intact. Rovers began the second half attacking the away end in front of their 1,388 travelling supporters. Evans was soon on the attack but kicked it straight behind whilst looking to win a corner. Rovers were on the front foot, though, and looking to further frustrate their hosts.

Coutts defended well to stop the home side down the right in the 50th minute. The ball fell to McGowan in a dangerous position, but he ballooned his cross well over Belshaw's bar. The Gas raced up the other end and Finley's inviting cross was cleared behind for a corner. Unfortunately, Evans lost his footing whilst receiving a pass from Elliot Anderson.

A great cross from Luca Hoole in the 56th minute caused panic in the home box and Anderton nearly profited from a loose ball but the ball was scrambled away. Collins was flagged offside two minutes later as the hosts continued to play a high line. Elliot Anderson won a free-kick in the 60th minute and McGowan became the first player to be cautioned. The free-kick was wasted though, with most of the Rovers forward line being flagged offside.

Finley charged down a clearance in the 63rd minute, strode forward and curled a shot straight at Roberts, before Elliot Anderson cleverly won a corner. From it, he took on his man and fizzed a low effort that Roberts was again equal to.

The crossbar came to Rovers' rescue again in the 64th minute; Belshaw diving helplessly as Pinnock's shot rebounded back into play. 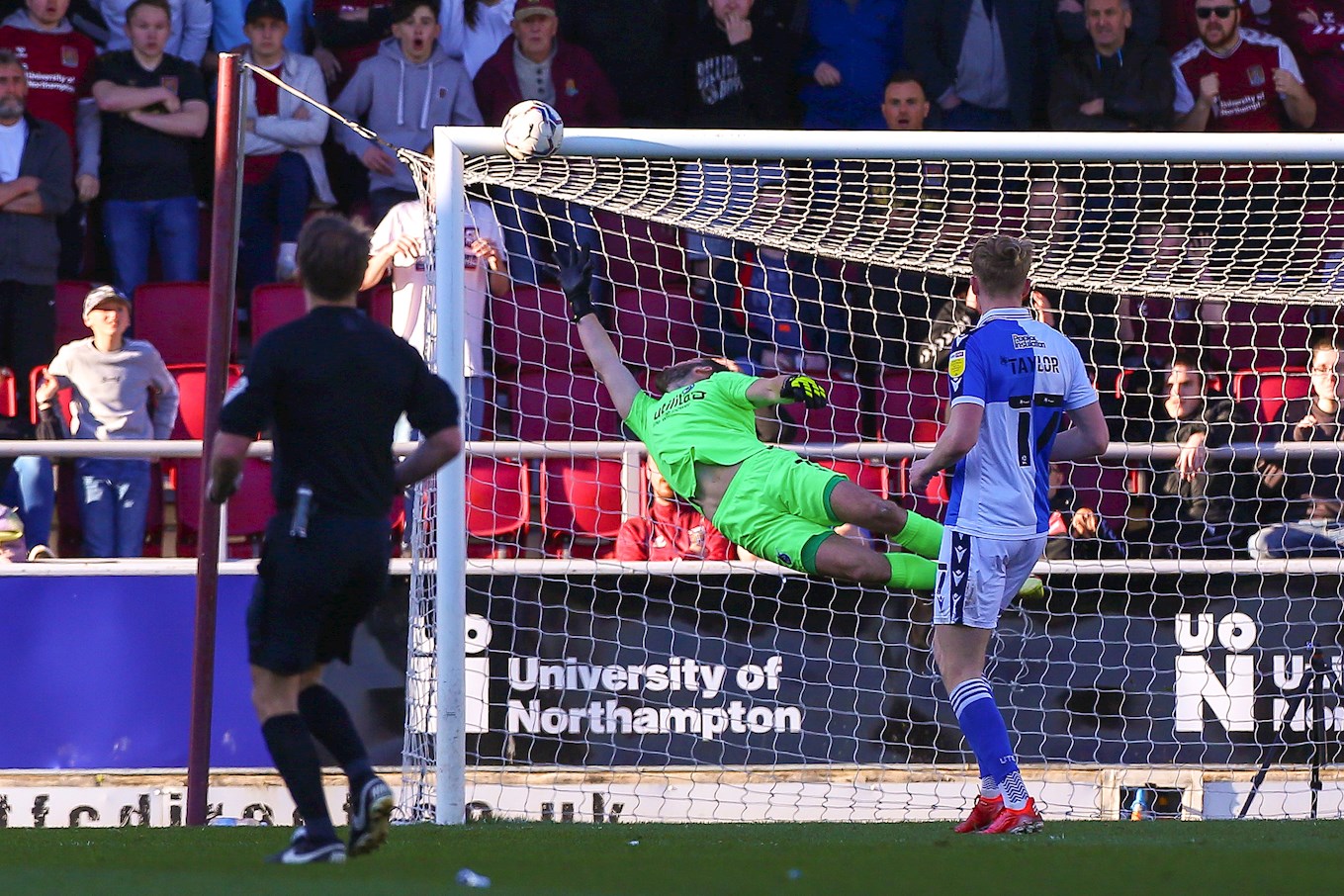 Finley was shown a yellow for a late challenge in the 68th minute. The game was becoming stretched now and Rovers were grateful for a lull in play thanks to a yellow for Horsfall for sliding in on Belshaw, who required treatment. The keeper was back in the action again in the 75th minute, picking up a booking for taking too long to take a free-kick.

Sowerby thankfully overhit a pass in the 77th minute with Rovers out of shape at the back. Hoole's clearance was then charged down, with the defender having to race back and concede a corner against the tricky Pinnock. Referee Langford blew for an infringement and a Rovers free-kick.

Play was now frenetic. Elliot Anderson looked to go round the 'keeper but the ball was snatched away from his feet. Northampton immediately counter-attacked and Connolly was cautioned for a professional foul. Elliot Anderson was hacked down in the 82nd minute as he went round McGowan; Evans' whipped free-kick rippled the side-netting.

Pinnock's long throw-ins were a constant menace but, from one in the 85th minute, Rovers streaked clear and Harry Anderson went rampaging down the right. Unfortunately, his cross was just too far in front of Aaron Collins. Harry Anderson then won a free-kick on the right in the 87th minute. Elliot Anderson's attempts to run down the clock were thwarted and Northampton cleared.

Rovers won an 89'th-minute corner as the fourth official indicated five additional minutes. Taylor was booked in the first of them, for kicking the ball away. Pinnock was then cautioned for the hosts for throwing the ball into the ground as he contested a decision.

Collins had the ball in the net after 94 minutes, but the linesman had already flagged offside against Evans. Moments later, referee Langley blew to signal a great away performance and a vital three points in the promotion race.

Next up for Rovers is a long trek to Carlisle next Saturday, March 26th for a Sky Bet League Two fixture.


Rovers are unchanged once again for today's clash with Northampton Town!

Ticket information for our away day against Northampton Town in mid March.

Fans should be aware that this fixture is ALL TICKET. No 'Pay on the Day' tickets will be available. Online ticket sales will not be available tp purchase from 12pm on Tuesday, 15th March. In-store sales will stop at 12pm on Friday, 17th March.

Subject to availability, general sale tickets will then be available online and in-store from 10am on Friday, 18th February.

The initial allocation of tickets for this fixture is 944. 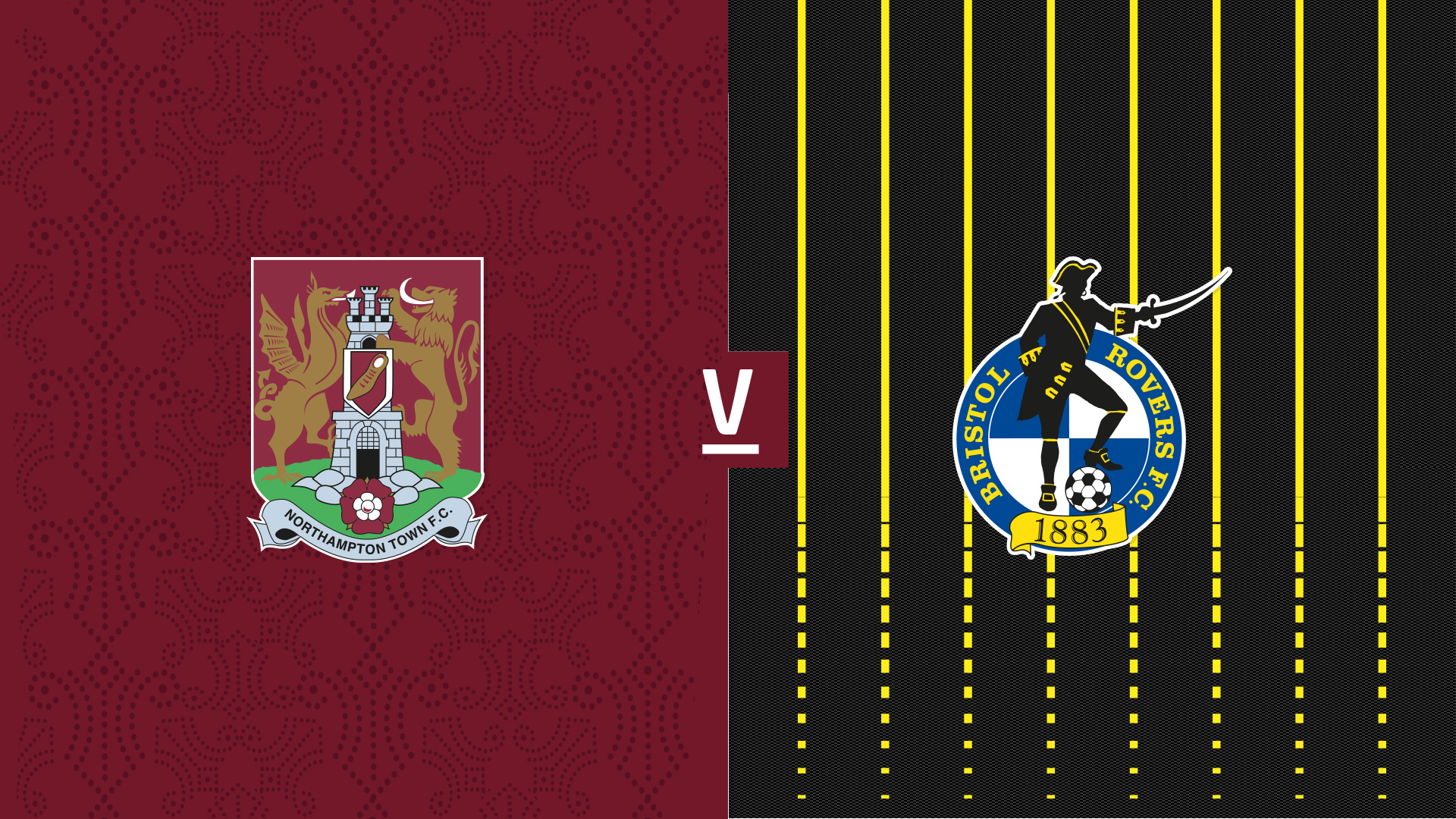 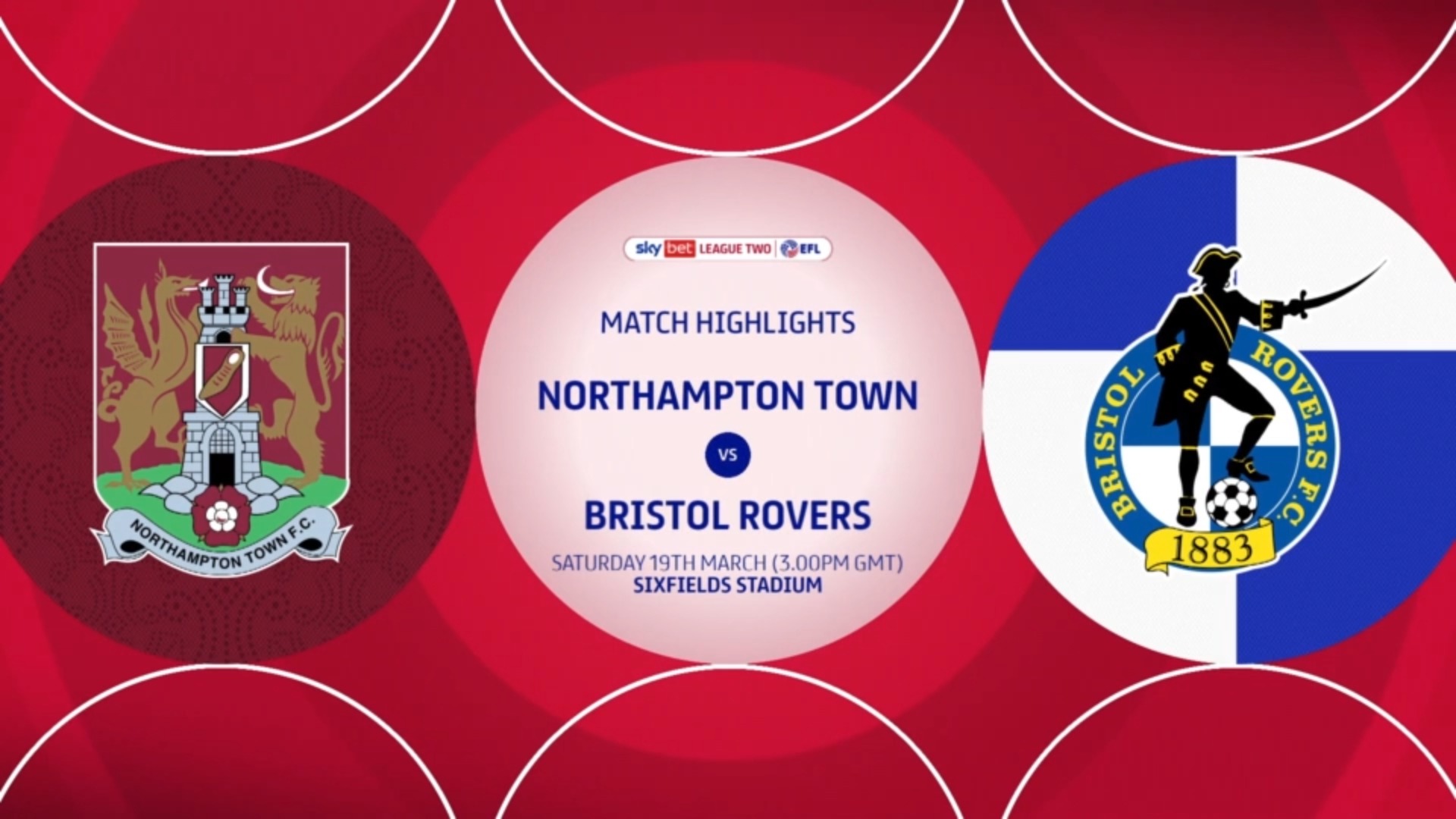 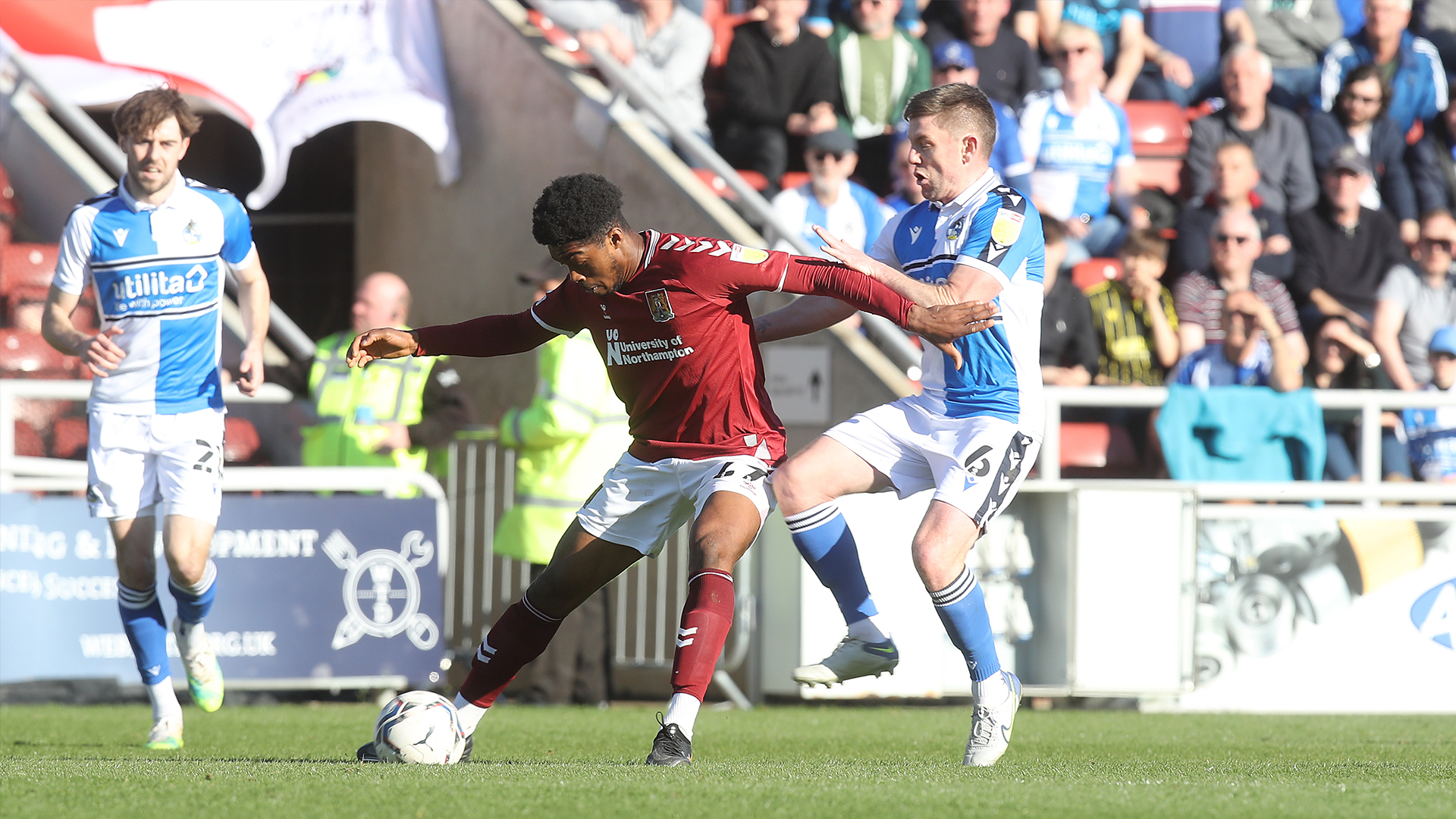