Find all the information you need to catch Saturday's game live from the comfort of your own home!

Rovers head to the Keepmoat Stadium on Saturday, 26th September (KO 3pm) to continue thier Sky Bet League One fixtures.

Over 1,600 Season Ticket holders redeemed codes to watch last Saturday's game, adding to sales of over 800 match passes for the fixture against Ipswich.

In recent weeks, the Gas has been backed by an online following of over 1,300 fans for our visit to Sunderland - with the Club retaining 80% of the revenue generated by iFollow sales.

Under government guidelines, Saturday's game will take place behind closed doors, with only essential personnel allowed inside the stadium. We must stress that supporters should not congregate around the ground for this game, or another game until government guidelines change.

Can I still watch the game?

Yes! The fixture is available to stream for UK-based fans with a £10 iFollow match pass. Head here to get your pass! Scroll down to "Match Passes' and 'Subscribe Now' for the Doncaster game. We recommend also the dedicated 'Live Match Centre' - which will house the link to watch or listen to Saturday's game.

What can we expect from our iFollow experience?

iFollow streams will consist of single-camera coverage and commentary from the team at BBC Radio Bristol. Users will can select between both home and away commentary on the setting wheel that appears when viewing live video.

I am a season-ticket holder, will I be sent a code?

Not for this game. Season-Ticket holders are entitled to free iFollow match passes for all home league games.

Can I watch this game from anywhere?

Yes! Sky Bet League One fixtures (which aren't selected for live Sky TV coverage) are available to watch for overseas subscribers. Fans wishing to view this game from overseas can do so by purchasing season passes, or by purchasing an overseas match pass.

I can't watch the game live on iFollow, will there be highlights?

Yes. After the game, there will be a short highlight package made available on our Youtube channel. Extended highlights will also be uploaded to the iFollow section of the website for subscribers to view.

Do I need an iFollow account to buy the game?

You will need to have an iFollow account to purchase your match pass, to do so, Register here.

It's also worth noting that having your iFollow account under the same email as your ticketing account would be recommended, to simplify the process for sending out the free passes to season-ticket holders when needed.

Match pass purchases must take place on a web browser, but games can be viewed on a mobile or tablet device. The EFL have supplied a PDF guide on purchasing match passes that's available to view HERE.

What devices can I watch the game on?

iFollow can be streamed via the EFL’s app, or through a web browser on a computer or device. To download the iOS app please click HERE. Andriod apps can be downloaded HERE. Supporters are advised that technical support can be accessed by contacting the EFL iFollow team on ifollow@efl.com.

For more guidance on streaming with iFollow, click here.

A handy iFollow FAQ's document has been created by the EFL to answer any queries relating to the iFollow platform. To view it please click HERE.

Bristol Rovers suffer defeat on the road against Doncaster Rovers...

A hectic 9 minute period saw three goals go in during the first-half, with Wright and Gomes giving the hosts a lead before Luke Leahy replied with a neat lob.

However, Doncaster flew out the traps following the break and a quick double put the Gas' chances to the sword. 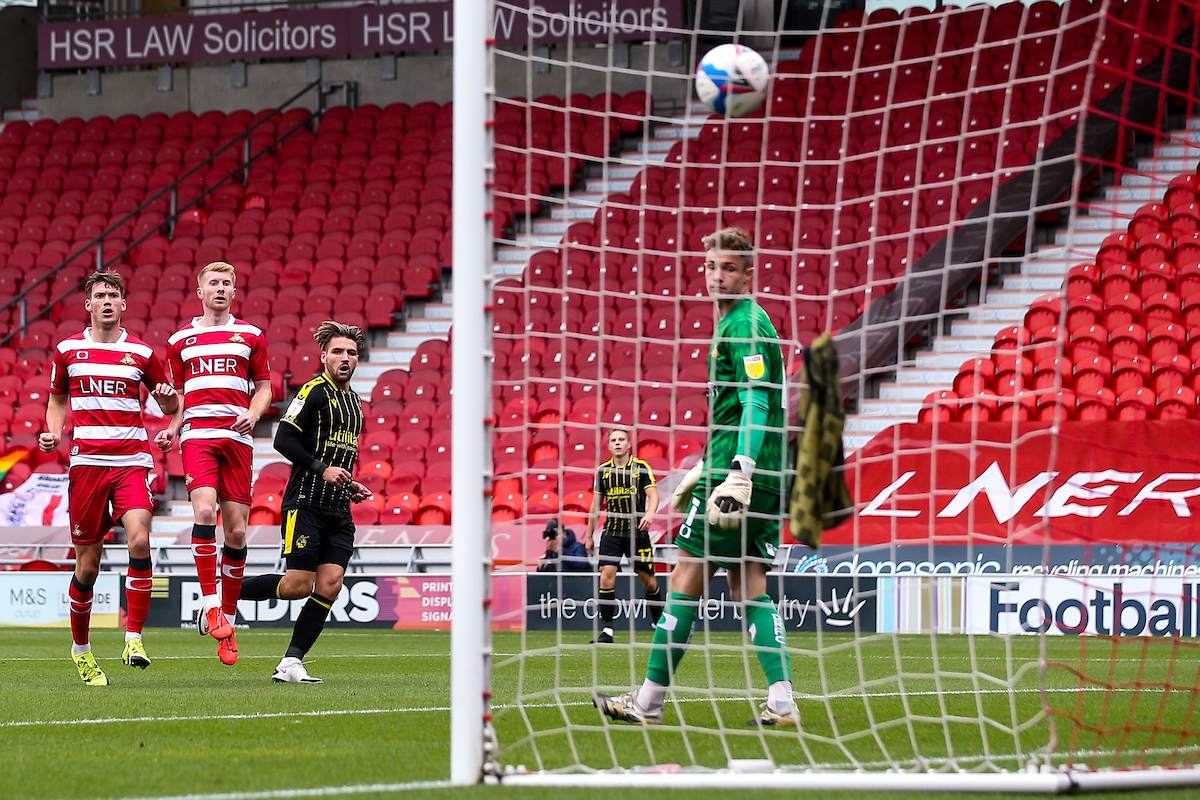 Ben Garner tinkered with his Rovers side ahead of a tricky tie at the Keepmoat Stadium, bringing in James Daly and new signing Luke McCormick for Ed Upson and Mark Little, prompting a change of shape into a 4-3-3. 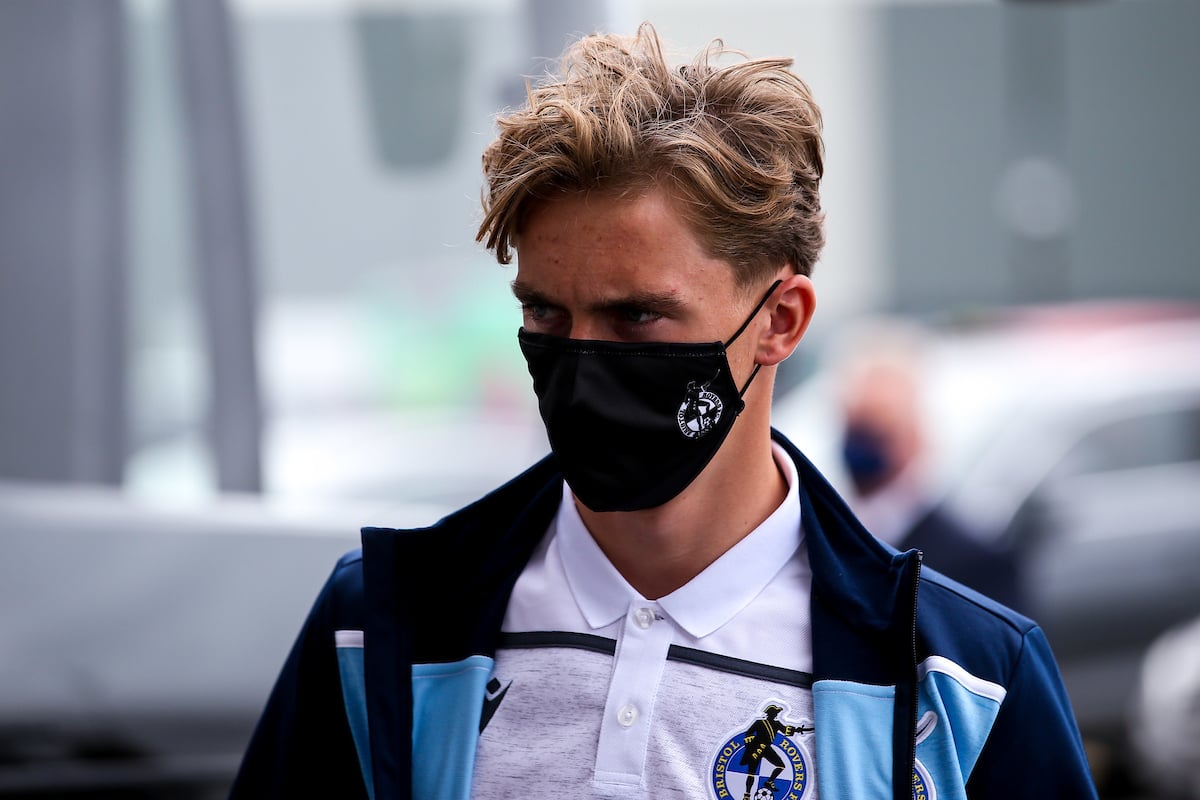 The Gas started brightly, exerting pace on the counter through Daly and Mitchell-Lawson. It was Daly's crossfield pass to Mitchell-Lawson which caused danger early on, with his squared ball into the box threatening the Doncaster ranks.

Not long after, Hanlan would get an effort away, delaying before motioning onto his right foot and firing on goal, it took a deflection off a man in red and white and bounced clear.

Before the game hit the 10-minute mark, Doncaster looked to threaten from a set-piece, with Whiteman firing wide of Jaakkola's right. Moments later, the home side went even closer.

Lokilo burst into the area, harried by Ehmer before dragging wide and firing at the near post. The ball cannoned between the post and Jaakkola, with the Fin grateful the deflection fell kindly in his hands, and not towards goal.

The game maintained its high intensity, with challenges from Reece James and Cian Harries both prompting bookings before the 20-minute mark.

The Gas for hard done to go behind in the early stages, with a dangerous delivery flicked back to Whiteman at the sharp angle on the edge of the box. He struck a low effort towards the back stick, with Wright on hand to prod home from close range. 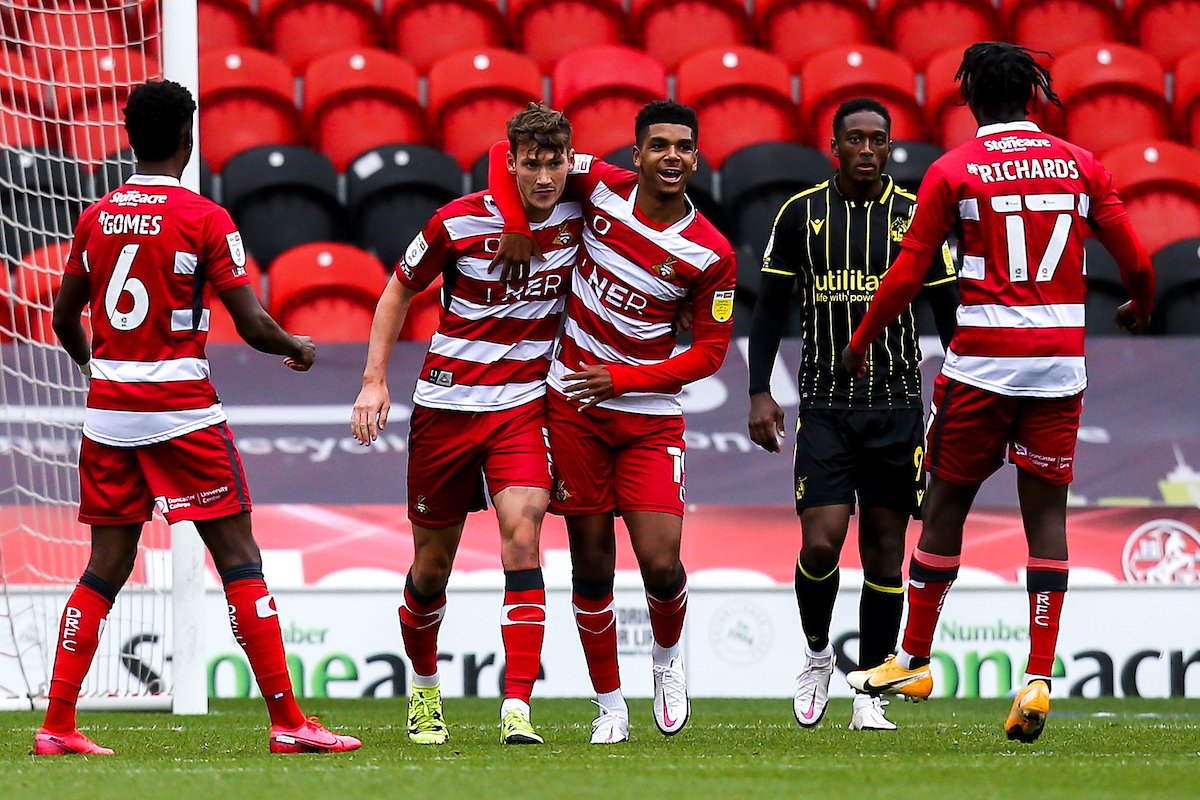 On the half-hour mark, Gomes made it two for the home side. Leahy appeared to be pushed in the box, before the ball was flicked back across. It deflected back to Gomes who rifled home from close range.

Rovers came back fighting, with an expert touch from Luke Leahy providing the left-back with a shooting opportunity. With the ball bouncing, Leahy opted to lift the ball over the onrushing Bursik, seeing it nestle comfortably in the bottom right. Top finish. 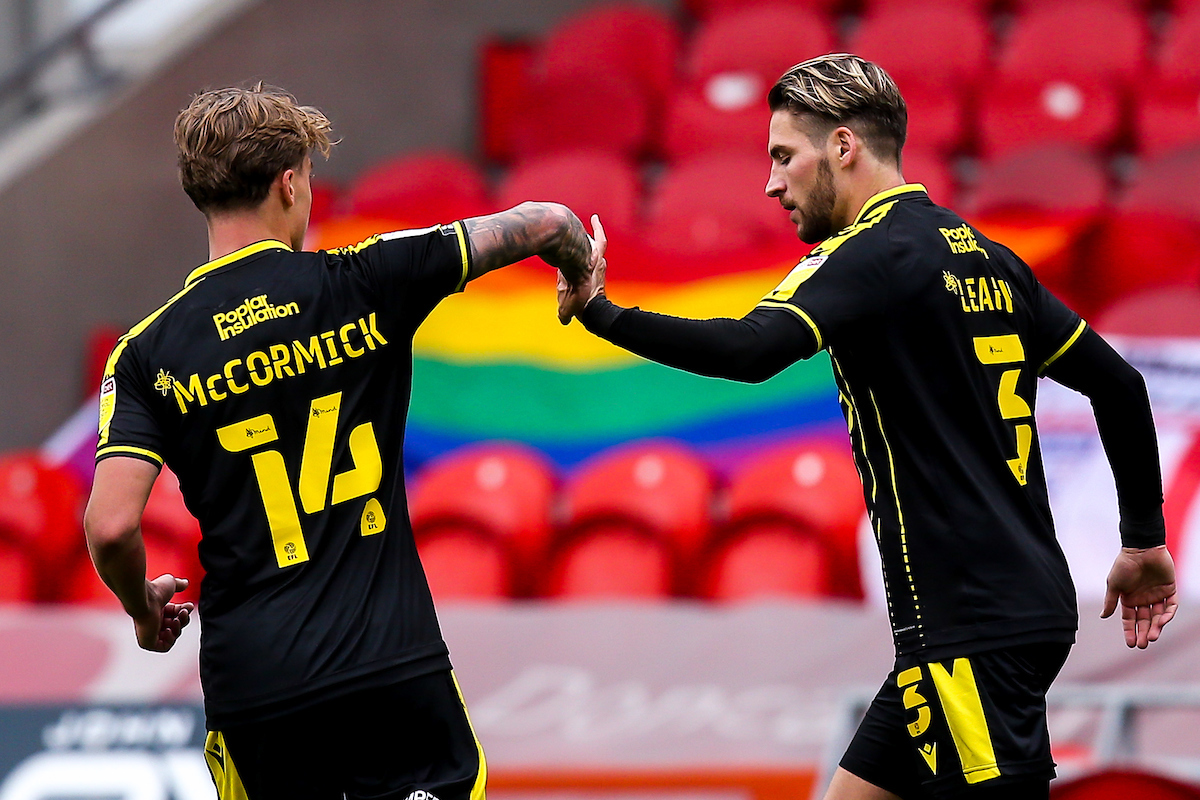 A ball pulled back to Lokilo in front of goal caused the Gas some worry with less than 10 to go in the half, but the Doncaster forward's strike was wayward.

With four minutes of first-half added time played, the ref' blew the whistle on an action-packed half with the Gas behind. 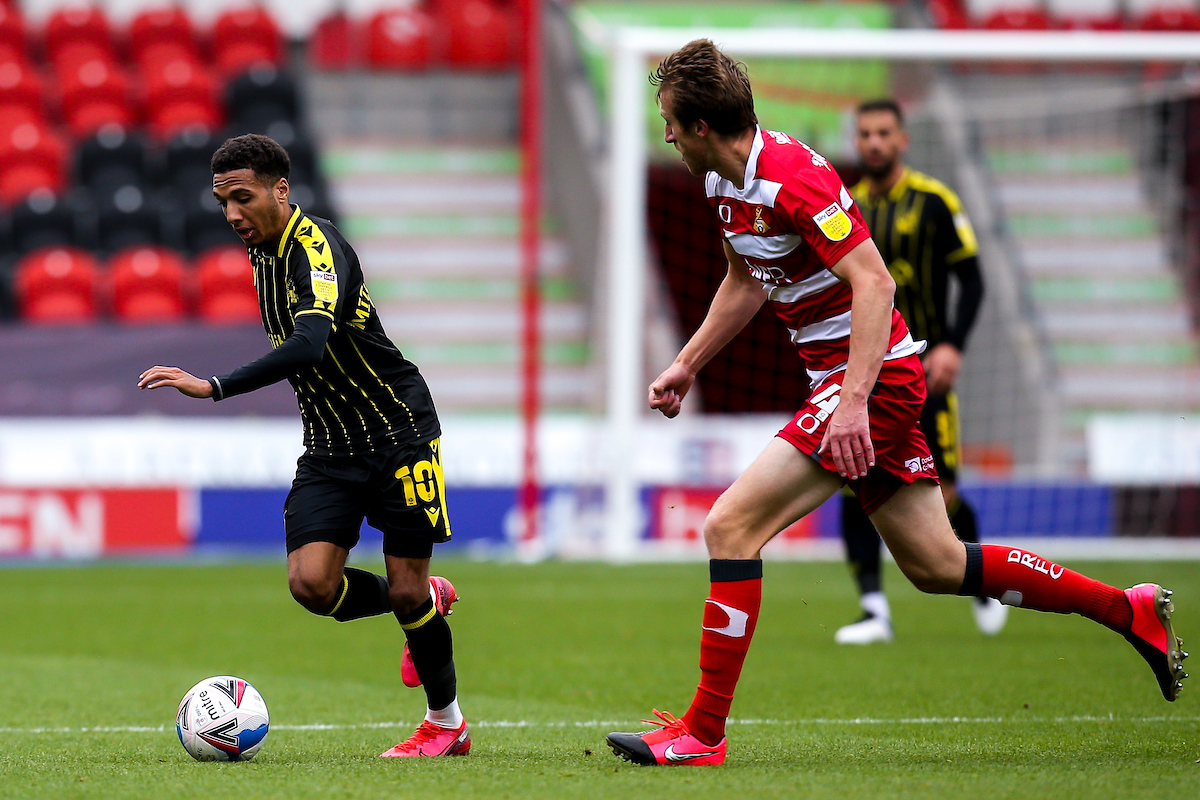 Bristol Rovers began the half with a superb chance, with Ehmer being found at the far post from a set play. The center-back stretched to make contact, firing narrowly over the bar, before lying with his head in his hands. 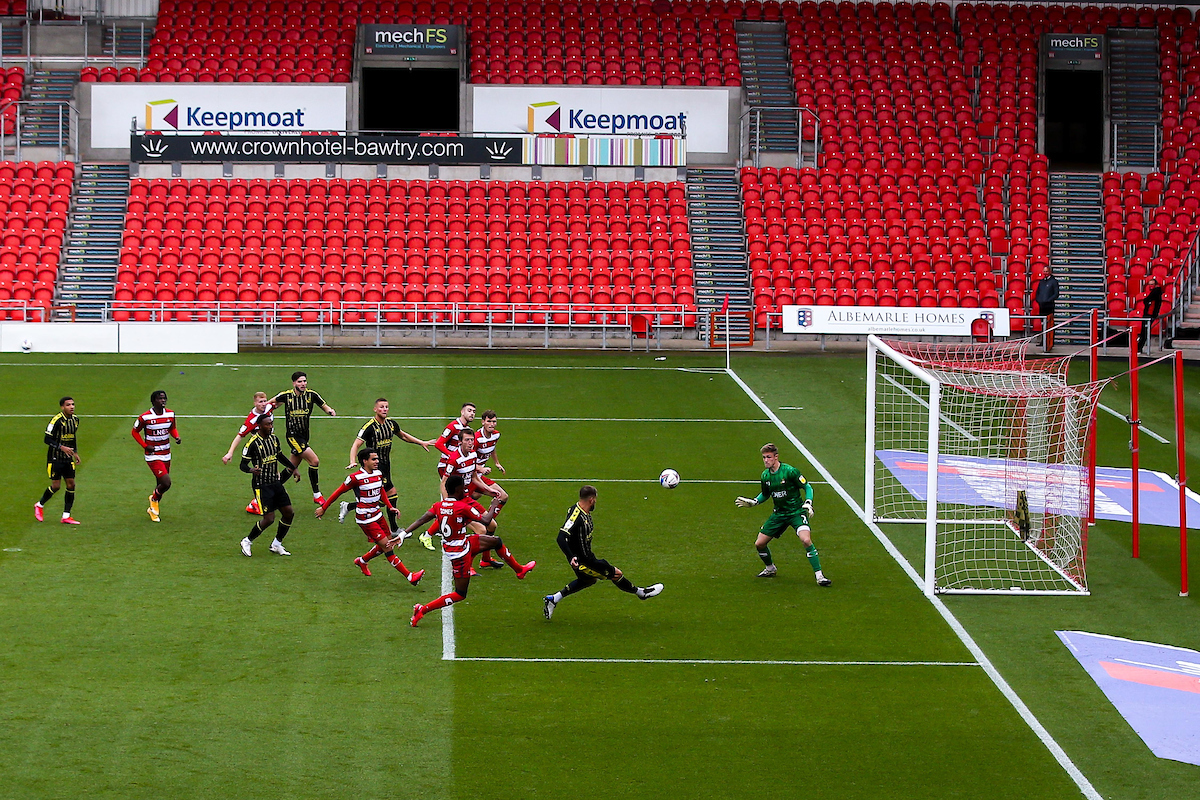 Doncaster had a chance of their own not long after, with Whiteman unconventionally knocking a header towards goal from a corner. Jaakkola watched its flight from the goalmouth, seeing it go clear of the bar.

Another set-piece spelled another chance for the Gas, with Westbrook's deliveries seemingly getting better and better as the game went on. He picked out Hanlan from the right side, but once again the Rovers player struck on the stretch seeing it loop over the bar.

Before the hour mark, Doncaster struck a big blow, with Richards firing on goal from the edge of the box, a blocked deflection fell back to the attacker, who found the bottom left with a neat strike.

Moments later, Taylor had a fourth for Doncaster, as he poked home from close range following a smart squared ball across the 6-yard box. 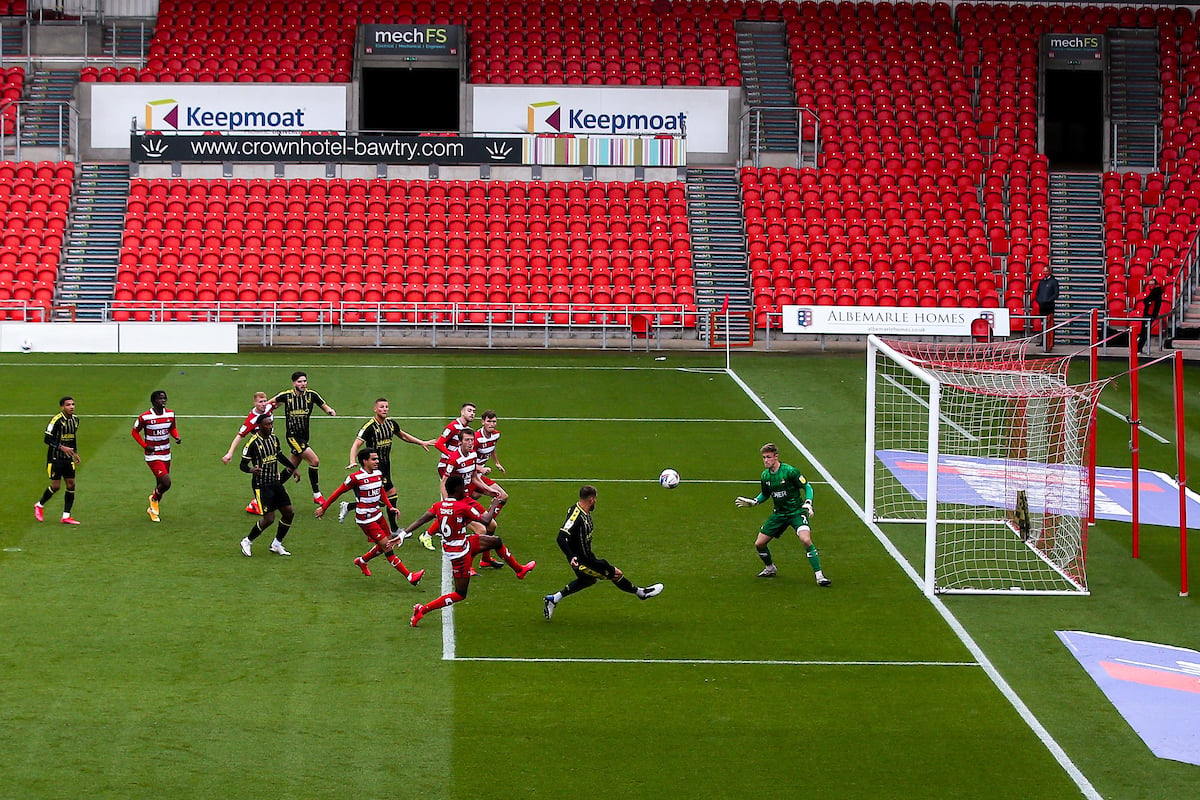 With just over 15 minutes to go, James Daly took aim from distance, seeing an effort head clear of the bar. It was his last touch of the game, replaced by Zain Walker afterward.

Reece James went close for the hosts shortly after, arrowing a left-footed strike past the far right, with Jaakkola stretching.

In the end, the Gas couldn't muster a late response, going down 4-1 at the Keepmoat Stadium. 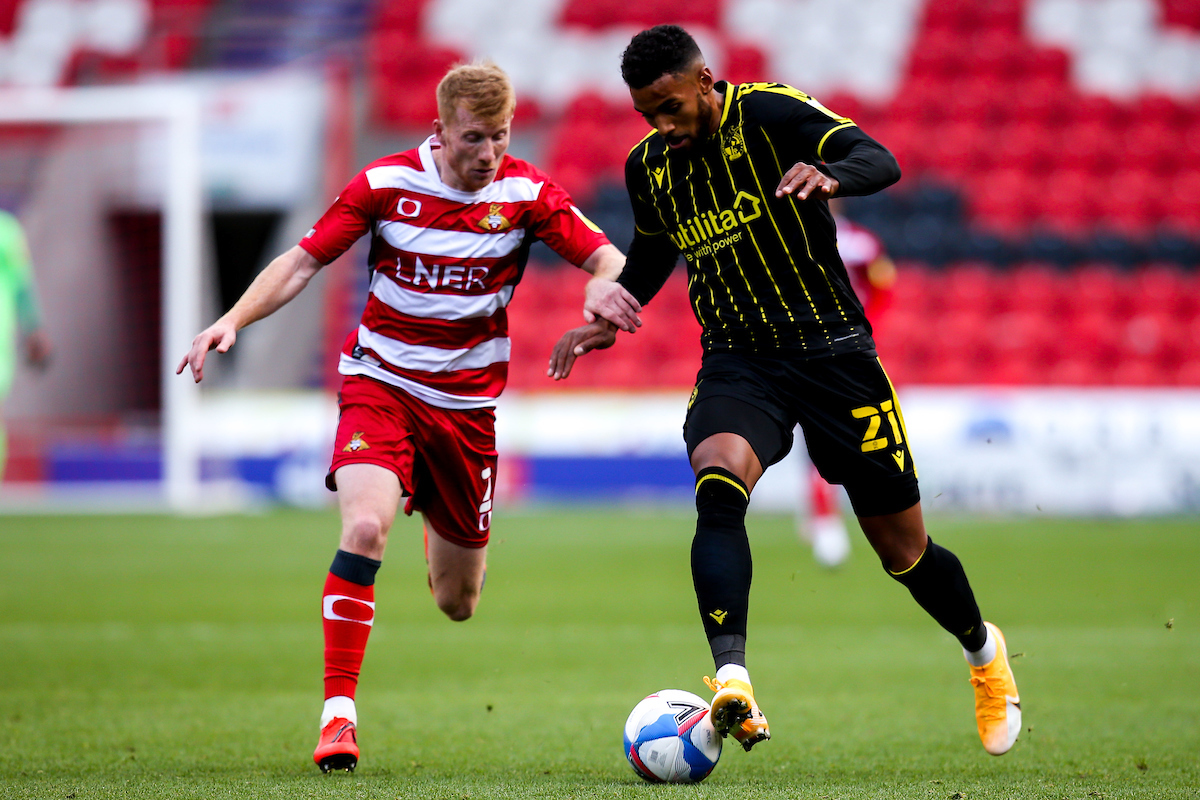 Rovers will look to respond a week from now against Northampton Town at the Mem. 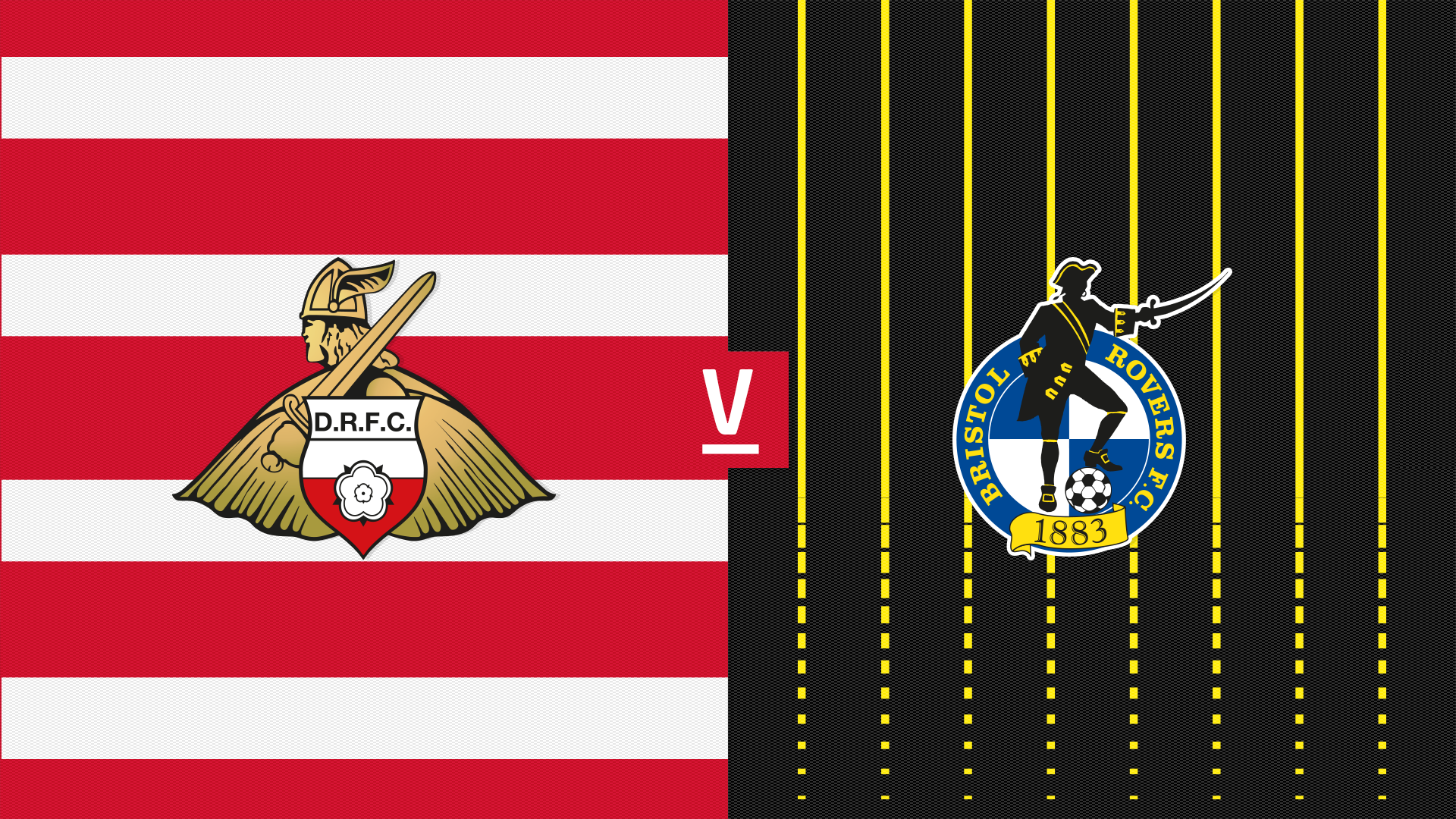 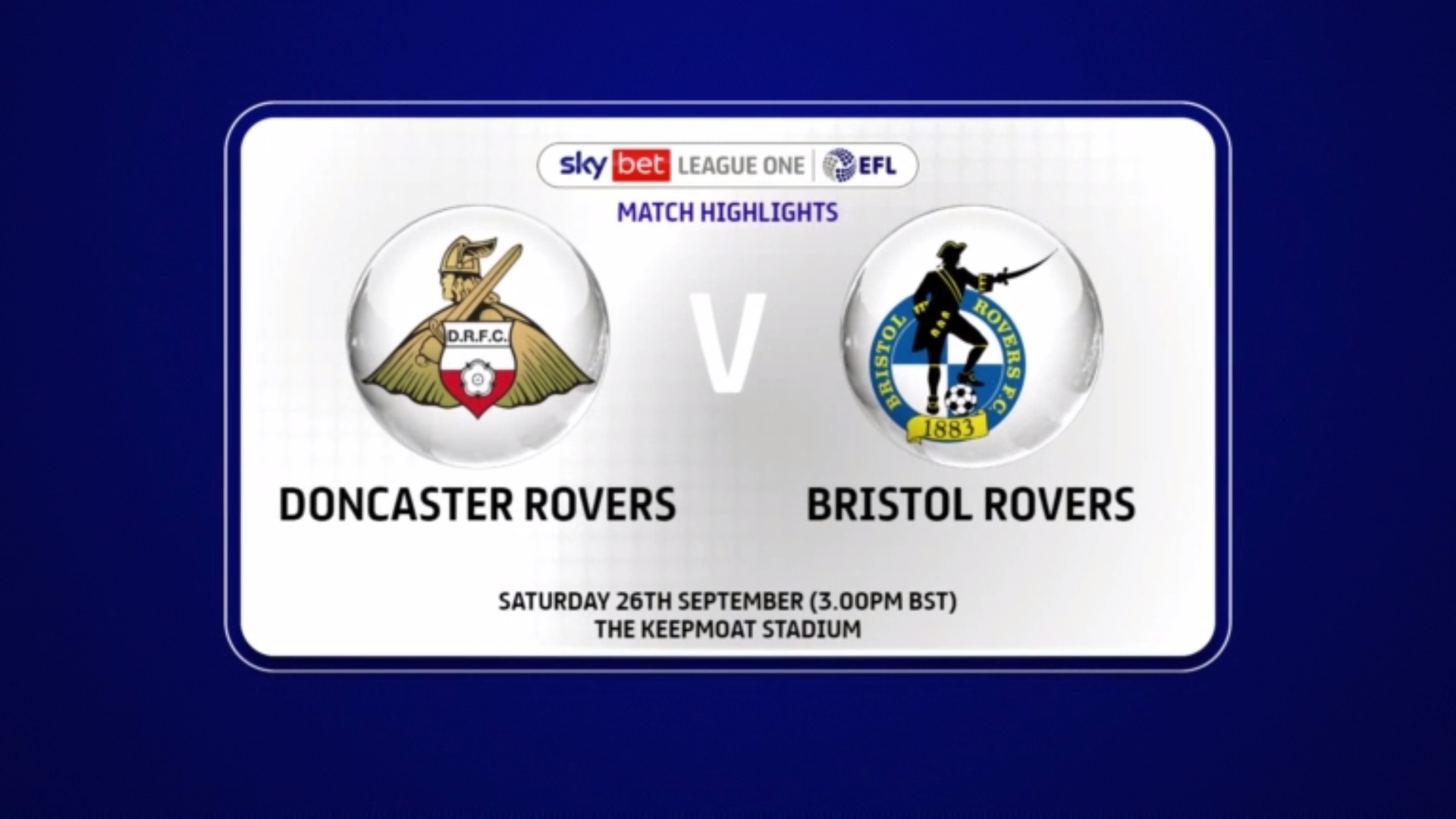 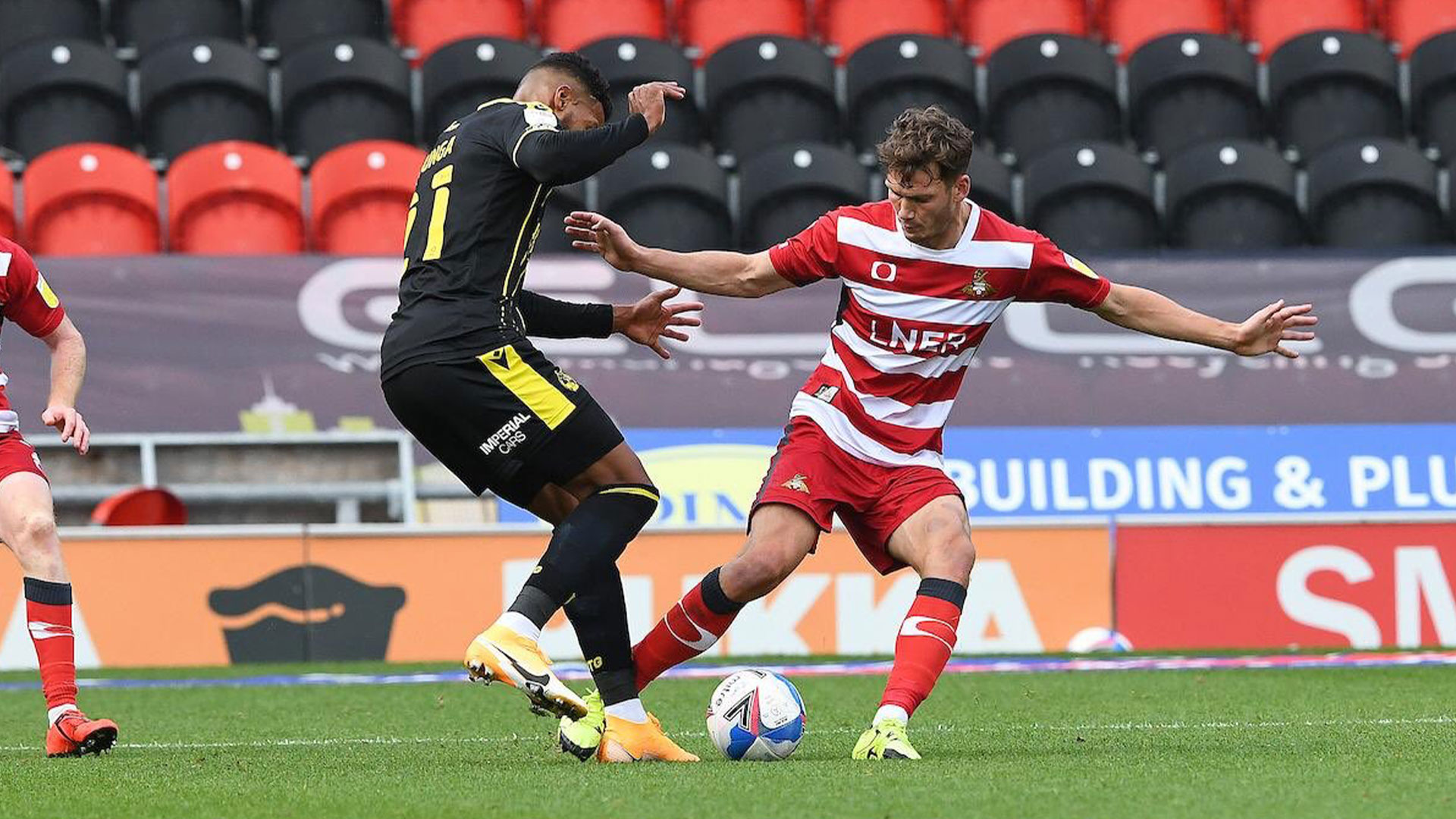