After a rare weekend without football, focus shifts to Tuesday night's home fixture, versus Hull City...

Following the postponement of Saturday's Accrington Stanley fixture, the Gas go into a midweek clash more rested than expected, looking to claim another Tuesday night victory!

Brandon Hanlan will be looking to continue his hot form, scoring three league goals in seven league games so far.

Max Ehmer will also be keen to repeat the quality of his performance in last week's outing at Shrewsbury Town, forming part of a resolute defence and clearing one effort off the line. His display prompted his inclusion in the Sky Bet League One Team of the Week.

Manager Ben Garner spoke to the press via Zoom on Monday morning, to discuss the week ahead, beginning with this midweek clash against Hull City.

Garner's side meet Grant McCann's Hull squad this Tuesday, a manager with a number of League One sides on his CV. After initially taking the Peterborough United post, McCann took his second side, Doncaster Rovers, to the play-offs in 2018.

From there, McCann secured the role of Hull City manager in 2019 but suffered relegation with the Tigers in his first campaign. He maintained his position over summer and is now looking to propel the club back to the Championship.

After his side's most recent result, a 2-1 loss to fellow front-runners Peterborough United, McCann chose to demand more from his finishers, speaking to www.hullcitytigers.com, saying, “Although we’ve scored some goals, I think we can still be better with the players we’ve got at the top end of the pitch."

The Tigers have started their League campaign brightly, following a 2019-20 relegation season which lacked their usual fight.  Early wins against Gillingham, Crewe, Northampton and Plymouth propelled McCann's side up the leaderboard towards its summit early on. Losses to Fleetwood and Peterborough this month have hampered their progress somewhat, but vital wins over Rochdale and Wimbledon means they maintain on track. 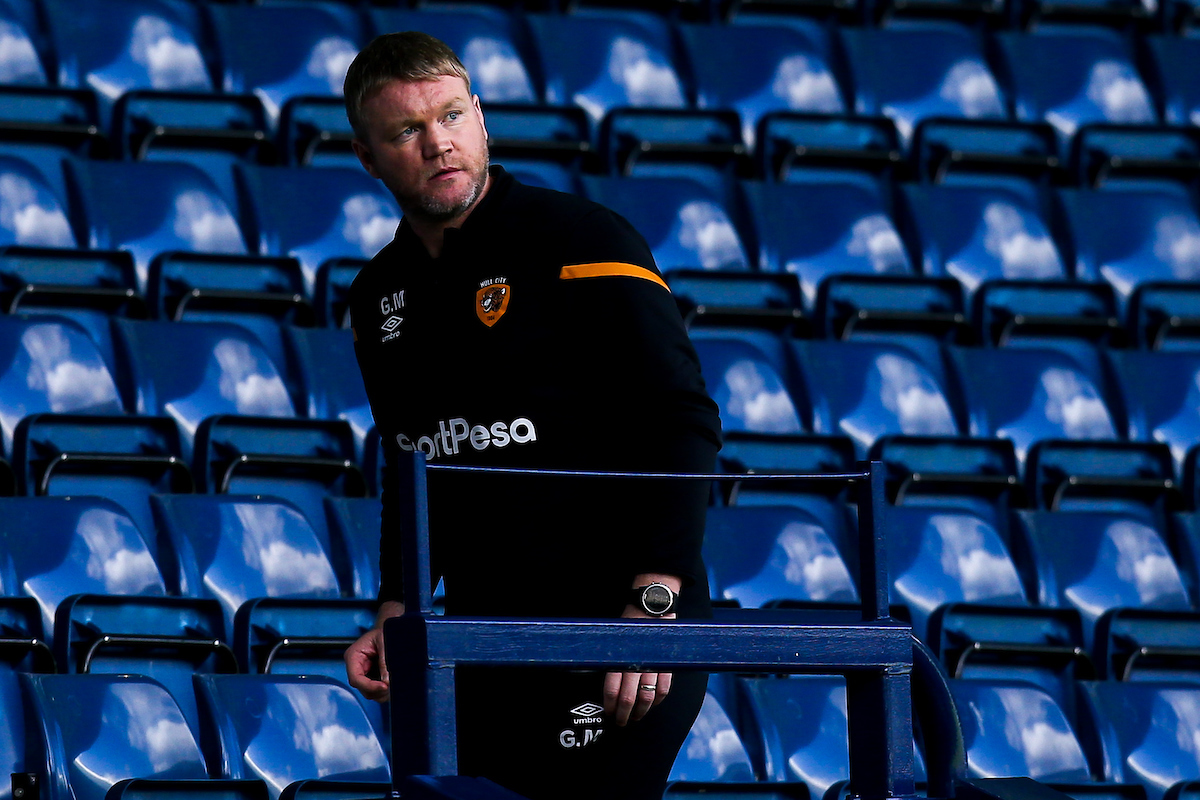 Incredibly, the last time Rovers met Hull City was all the way back in 2004, just under 16 years ago. Since then, Hull City have climbed all the way to the Premier League to then tumble back down to League One. In that last meeting, in 2004, Hull City ran out 3-0 winners on their own turf. When the two sides met earlier in the season at the Mem, Rovers secured the victory, with the late Junior Agogo smashing home a late winner.

Rovers will be wearing their famous blue and white quarters at the Mem on Tuesday night.

Tune in to this midweek tie from the comfort of your own home. The link below has the full rundown on how to watch Tuesday's game live on iFollow - with match passes priced at £10.

Every League One side is once again in action on Tuesday, with exception of Accrington Stanley and Swindon Town, who's game has been postponed. League leaders Lincoln City travel to Crewe Alexandra.

2nd placed Peterborough United host Jake Buxton's Burton. If results go the Gas' way, a win on Tuesday could see them teeter on the edge of the play-offs.

Hull City produced a second half comeback to beat Rovers at The Mem, even though The Gas had made the perfect start.

James Daly showed the eye of the tiger, giving Hull a rocky start, by slotting home 70 seconds after the opening bell.

Rovers were comfortable in the first period, despite Hull’s possession, and should have doubled the lead through Zain Westbrooke right on half-time.

Rovers did their time, but did not take their chances. Hull went the distance, got back on their feet, and rose to their rivals’ challenge. After a triple substitution on the hour, all three of Hull’s replacements got on the scoresheet, with Keane Lewis-Potter drawing the Tigers level, Regan Slater giving them the lead, and Tom Eaves producing the coup de grace in injury time.

Afforded an extra few days between games – and spared a trip north up the M6 - because of the postponement of Saturday’s game against Accrington Stanley, Ben Garner named not only an unchanged starting 11 for a fifth straight game, but kept the same bench from the win at Shrewsbury, too. A rare, and appreciated, luxury.

Hull, whose loss at home to Peterborough on Saturday was their second loss in their opening seven games – they have won the other five – made two changes. Jordy de Wijs and Hakeeb Adelakun, the latter affiliated to a team not a million miles from here, came into the team, with Keane Lewis-Potter dropping to the bench, and Jacob Greaves out of the squad altogether.

So far on their travels in Sky Bet League One this season, City had managed three victories while keeping a clean sheet, but this was never destined to be a fourth time of not conceding.

Rovers earned a corner from the off, but after Hull dealt with the initial threat, Magennis was robbed of the ball, and Daly was able to race away, beyond a stunned City rearguard. If you are Hull, at this point, you want the ball to have fallen to a player who is out of touch, and barely warmed up.

Instead, they got Daly, with two goals in his last three games, getting a sustained run of first-team football, and brimming with confidence. Keeping his head up, he stroked home with his left foot. He was never going to miss. 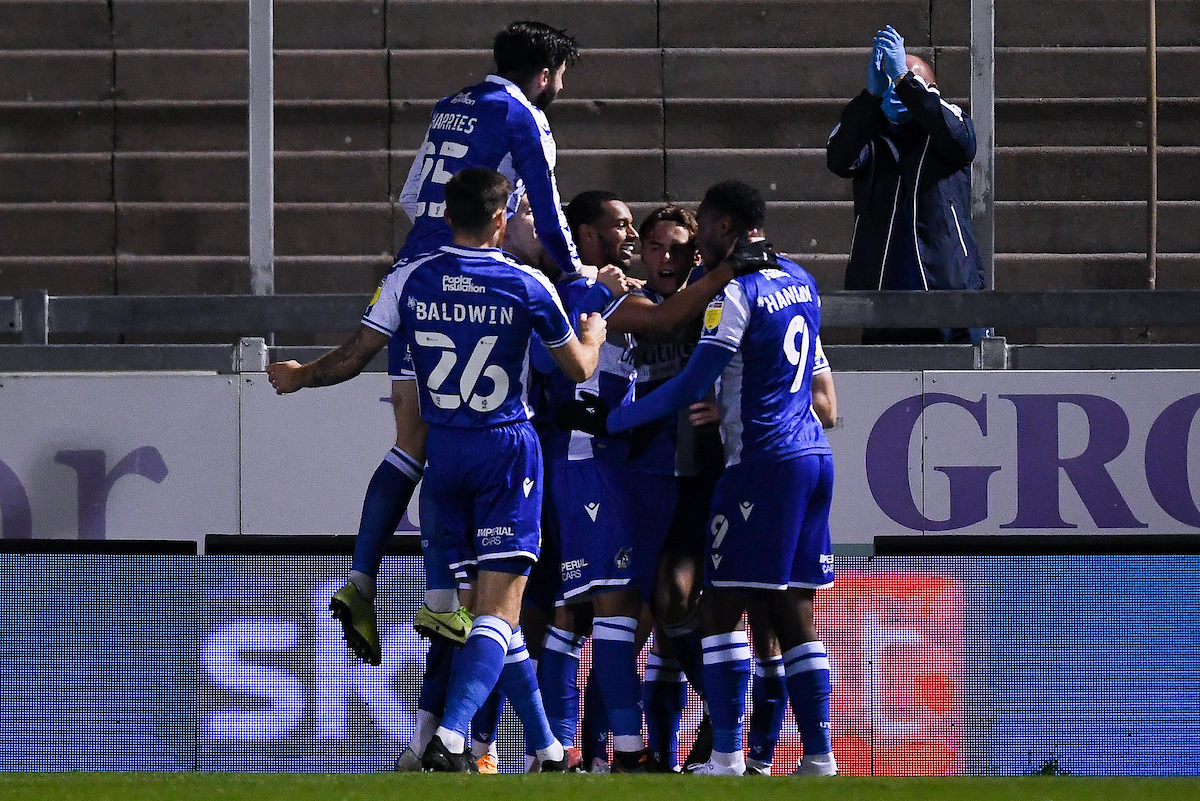 Hull showed their claws for the first time when they dispossessed Brandon Hanlan on the halfway line and sent Josh Magennis away. He was fouled on the edge of the area by Cian Harries, but the direct free kick, taken by Callum Elder, was weak and straight at Anssi Jaakkola.

At the other end, Hanlan pinched the ball off a dithering Josh Emmanuel, who deliberately tugged the Rovers number nine back. While Hull boss Grant McCann was still berating officials, questioning why his right-back was cautioned, yet Harries had not been, Zain Westbrooke delivered a quality delivery ball from wide on the left which evaded every Hull defender – but went by every Rovers attacker, too.

Luke McCormick became the first Pirate in the book after a free kick was given against him, and he prevented the quick taking of the dead ball. 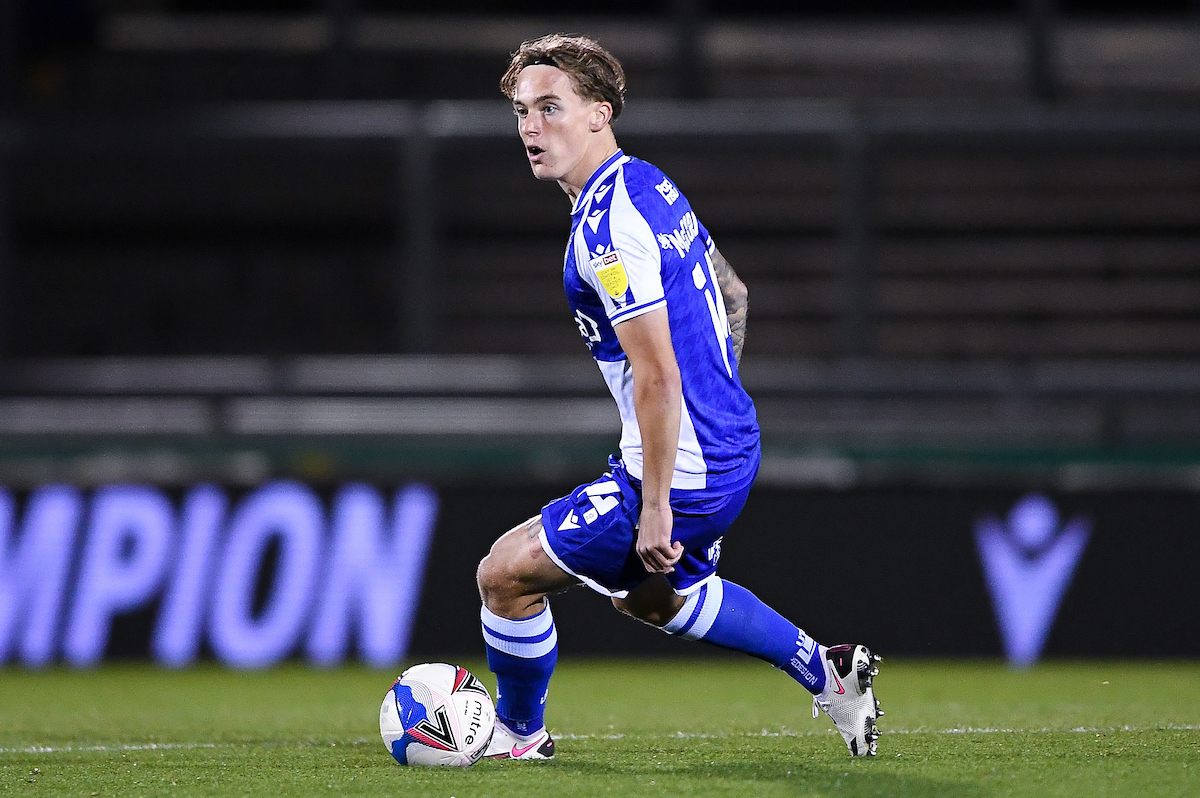 By the half-hour mark, Hull were finding good territory, but failing to do anything of note to test Rovers’ in-control back-line. Hakeeb Adelakun had a good position to cross, but did not take it; George Honeyman delivered a free kick, but it was headed strongly clear; and Jaakkola calmly caught the first corner the visitors could swing in.

With ten minutes of the first half to go, Emmanuel finally got the ball right, sent it invitingly across the six-yard area, but the invitation was not RSVPed, with no Tiger waiting to pounce.

Hull were now looking more like predators, and they nearly benefited from their prey giving themselves away. Tutonda tried a risky pass near his own area, and missed his target, leaving Hull in a good position. Eventually, the ball fell to Honeyman, whose shot smashed into side-netting.

Greg Docherty fired over, as Hull continued their strong end to the half, but their attacks, all the way to the interval, had been tame enough.

There were nearly a beautiful framing of the half, but Rovers squandered a glorious chance to double their lead, in first-half stoppage time. De Wijs was the Tiger caught on the ball by Hanlan, who was burning bright throughout the half, and Hanlan set off towards goal. Unselfishly, he squared to Westbrooke, but the midfielder could not give the half a perfect book-end, as his shot was stopped by Matt Ingram, whose immortal hand-eye co-ordination saved the day, preventing the symmetry of which he was presumably fearful. 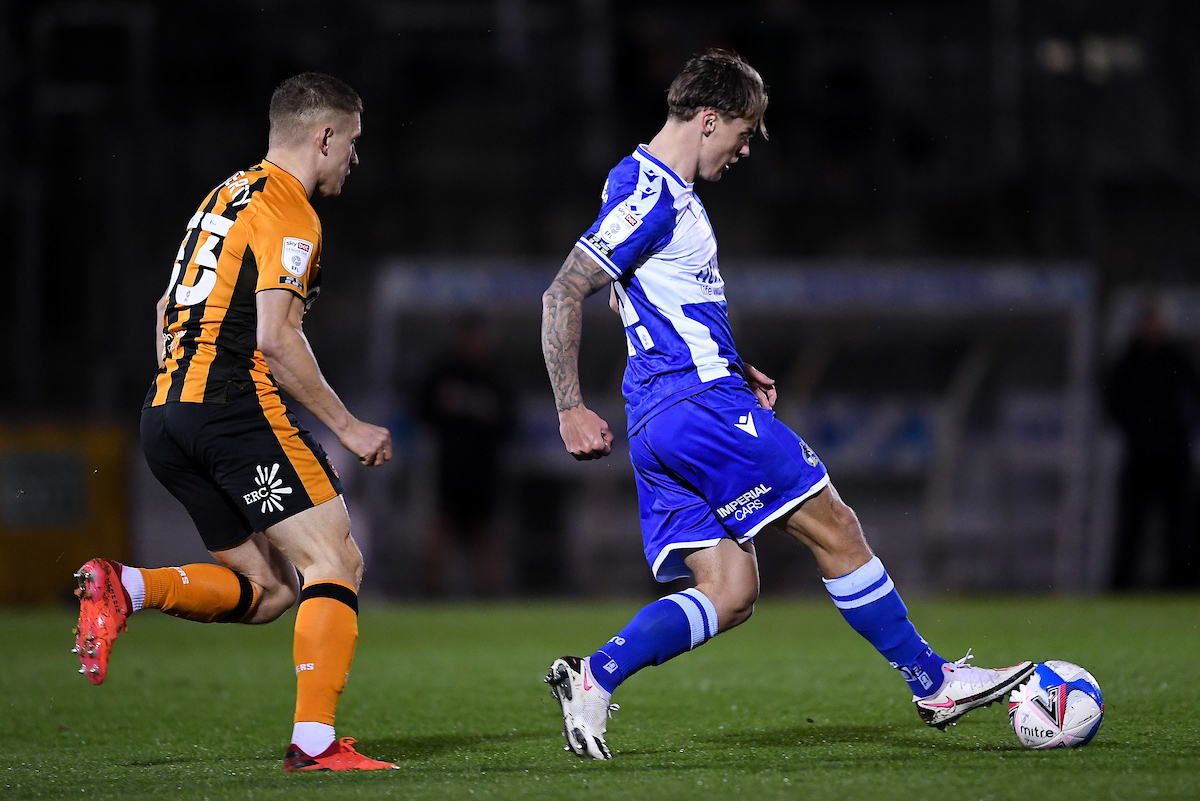 By the hour mark, with Hull’s chances in the opening period of the second half limited to a worrying moment for Rovers when Harries sliced an attempted clearance, McCann decided on a triple substitution.

Bringing on frontmen Magennis and Adelakun, as well as midfielder Docherty, on came Regan Slater, former Rovers frontman Tom Eaves, and Keane Lewis-Potter. The latter had an immediate impact.

Just three minutes after coming, Lewis-Potter was well-placed in the area, and after good work from Wilks and Emmanuel, was on the end of the right-wing cross to head into the corner.

Lewis-Potter then hit the bar – although he had already been flagged for being offside – and Ben Garner responded to Hull’s increasing confidence by bringing on Erhan Oztumer for Luke McCormick.

It was, though, another Hull replacement that struck the next, vital blow. City played dangerously with the ball in their own half, but retained it, and when they send Eaves away down the right flank, Harries took a tumble at the wrong time while under pressure. Eaves now had space, picked out Slater at the far post, and the on-loan Sheffield United man took his time before clipping home.

Rovers responded with a long spell of possession which ended with a cross from Josh Hare which Ingram appeared to spill, no foul was given, but Hull eventually conjured the ball away. Having made their three changes, City nervously waited as goalkeeper Ingram and De Wijs had to have treatment, but both were able to continue.

It was Hare’s last action, as Garner sent on Sam Nicholson with eight minutes to go. Rovers threw men forward, and got balls into the area, but it was the Hull defence’s turn to stand firm, and repel whatever came their way.

Rovers never threw in the towel, but Eaves produced the knockout blow in injury time, taking advantage of Rovers pushing men up for the equaliser, and rounding Jaakkola to round things off. 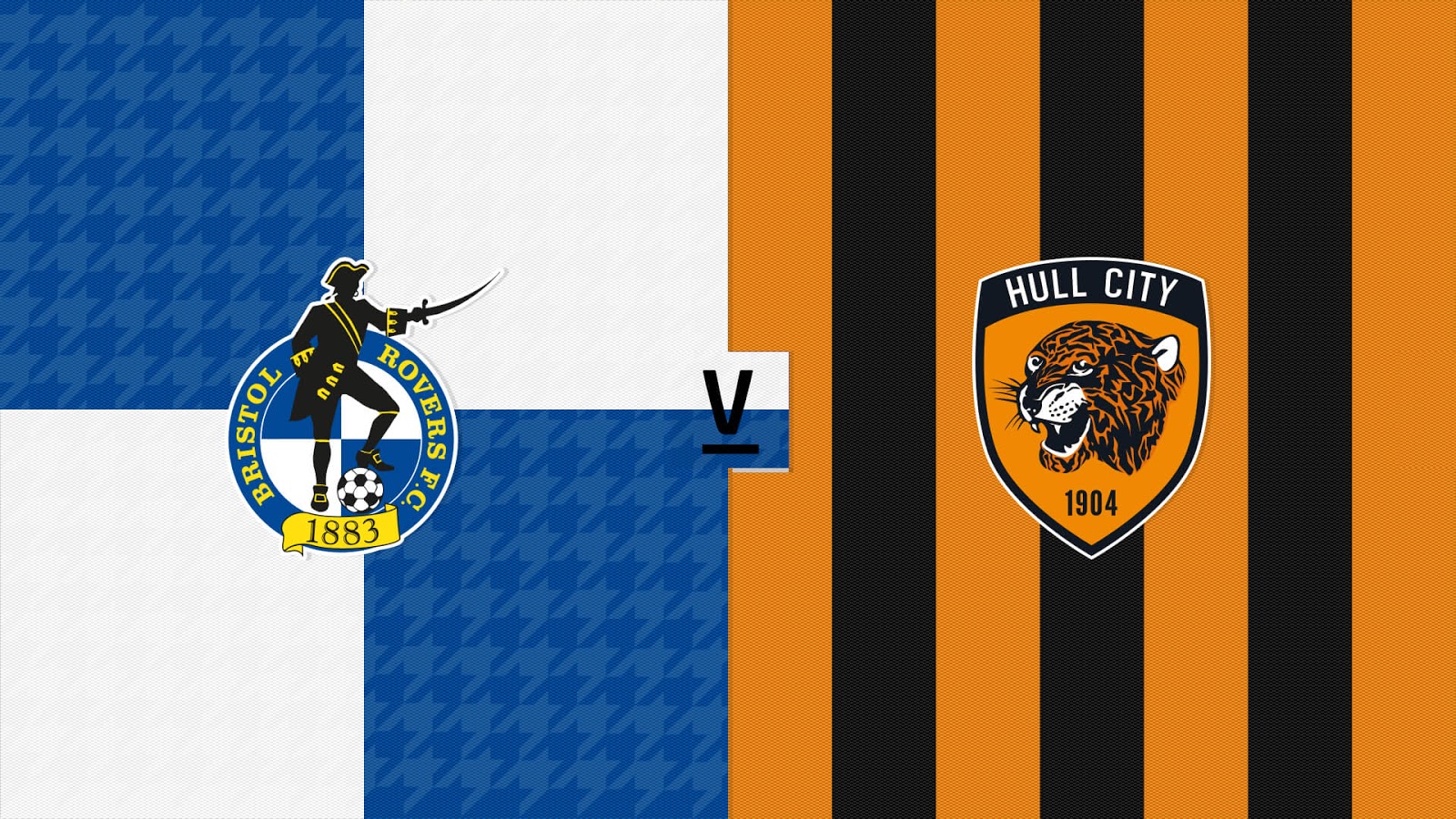 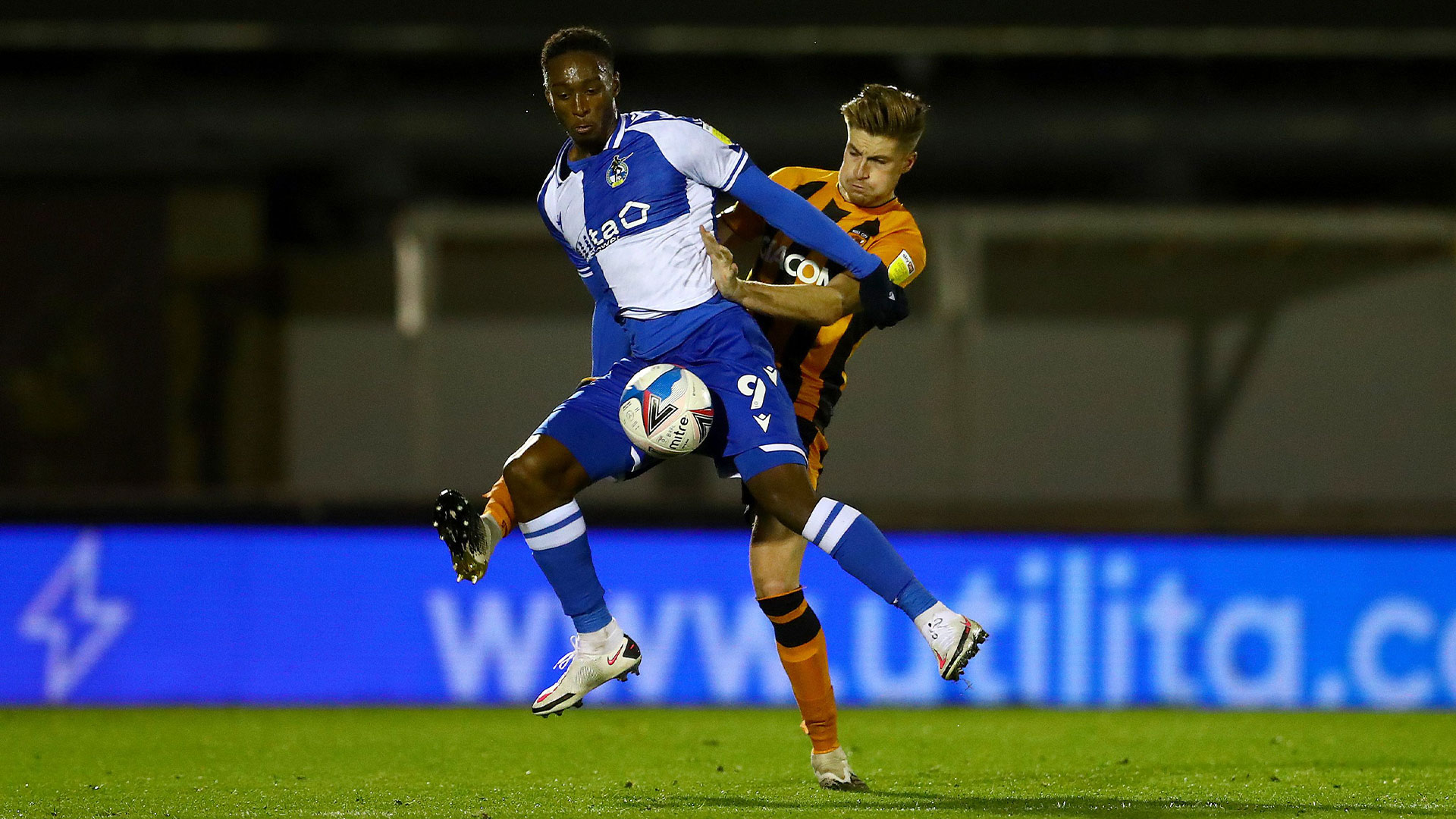