We preview the Gas' meeting with Chelsea Under 21's...

The Gas play host to Chelsea Under 21s on Wednesday in their final game of the Papa John's Trophy Group Stage, knowing a draw with a win on penalties will be enough to secure their place in the next round.

Following the dismissal of Ben Garner on Saturday evening, Head of Recruitment Tommy Widdrington took the role of Caretaker Manager ahead of our tie with Chelsea Under 21s. He looked ahead to the midweek tie with the press this afternoon.

The young Chelsea side got off to a slow start in their Papa John's Trophy campaign, with a loss against Oxford United welcoming them into the 2020/21 season. A second-half Jon Russel strike sparked a resurgence, from 2-0 down, but the blues couldn't fight back to equalise and went home empty-handed.

Their next trip in the trophy yielded a better return, with the Chelsea side securing the bonus point following a 1-1 draw with Walsall. Dynel Simeu equalised for the youth side after the London-based team fell behind in the first half. The youngster then went on to grab the bonus point, winning 5-3 on penalties. 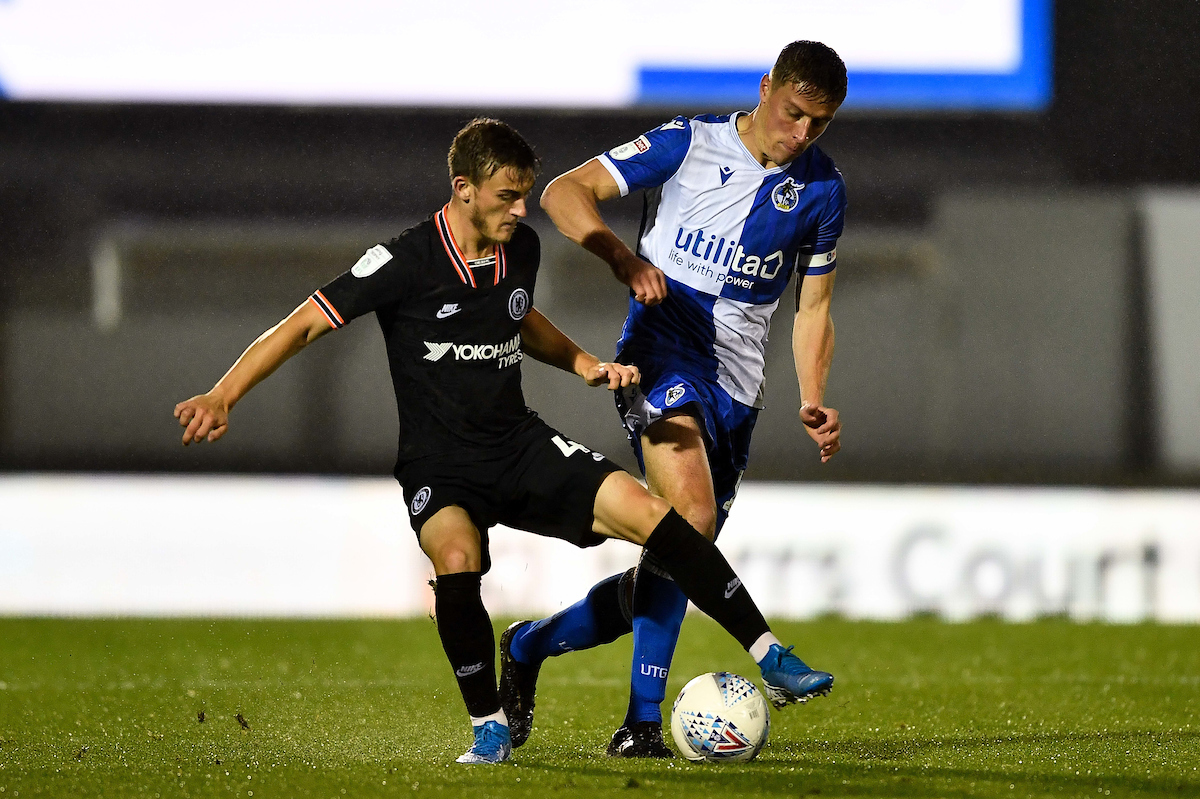 The two sides met at the Mem in the group stages of last season's EFL Trophy, with a very different looking Rovers side coming from behind to secure victory over Chelsea's youngsters that day.

A second-half response with goals from Victor Adeboyejo and Liam Sercombe was enough to secure all three points after Charlie Brown opened the scoring for the away side. Both sides would go on to progress from the group last campaign, with the Gas topping the group and Chelsea winding up in second.

Of the Chelsea squad that were beaten that day, full-back Tariq Lamptey has since gone on to feature regularly for Brighton in the Premier League. 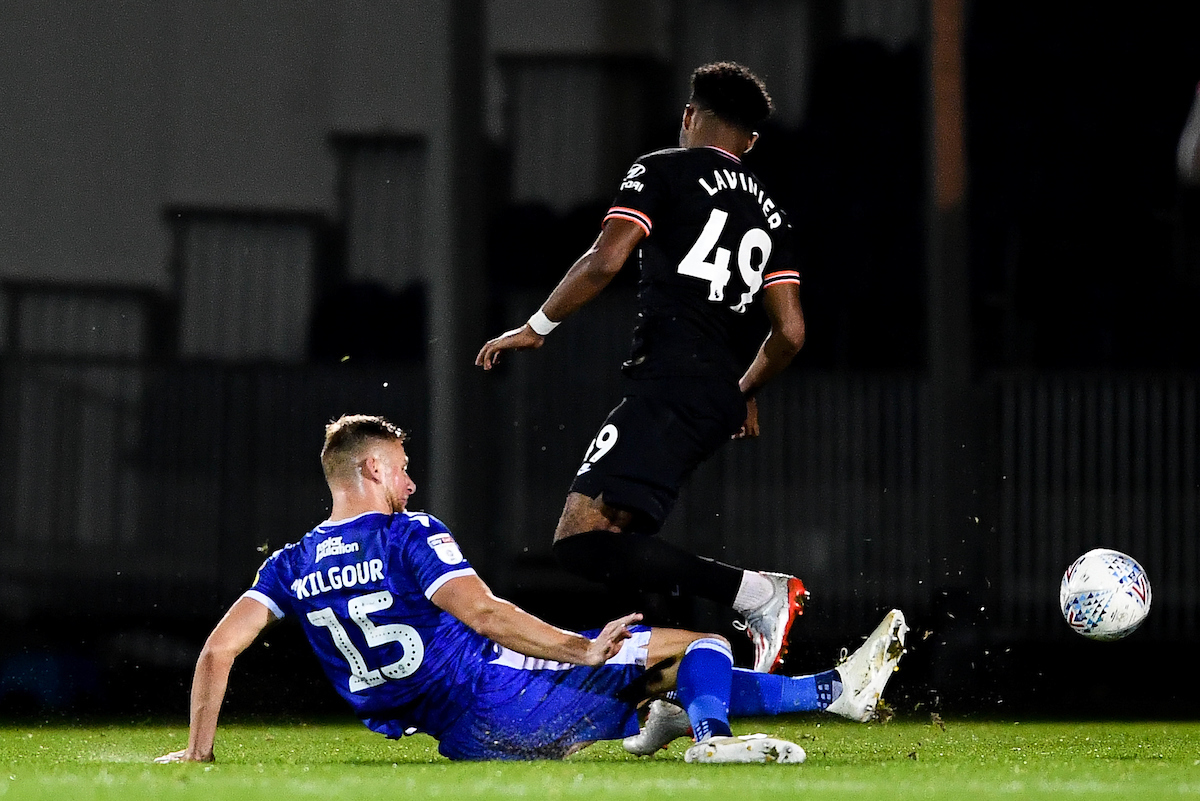 Wednesday's game is available to watch live on our iFollow streaming process!

The link below features all the information you will need to watch tomorrow's game.

iFollow Info - How you can watch Wednesday's game LIVE!

With the final games concluded for the Gas' Group L rivals, Oxford United and Walsall, Rovers know what they need to achieve to progress. With Walsall on 3 points, and both Chelsea and the Gas on 2 points, Rovers need either a draw with a win on penalties or a win to progress.


The kick-off time for our Papa John's Trophy tie against Chelsea U21s has been bought forward to 6pm.

Victory over Chelsea U21s at the Mem was enough to deliver Rovers a spot in the knockout stages of the competition.

An entertaining encounter at the Mem saw Rovers register a 4-3 win, with first-half goals from Brandon Hanlan and Sam Nicholson and a superb second-half free-kick from Zain Westbrooke and a late Josh Hare header helping the Gas to victory.

Hanlan opened the scoring with a fine individual goal, firing a firm finish home from inside the Chelsea area.

A minute later, Rovers’ lead was wiped out when Anjorin slotted a composed finish beyond van Stappershoef.

The third goal of the contest came just 15 minutes into the game when alert play from Sam Nicholson allowed the winger to tap home a close-range rebound after James Daly’s effort caused problems for Ziger in the Chelsea goal.

Rovers added a third in speculator fashion, as substitute Zain Westbrooke took everyone by surprise by going for goal from a narrow-angle from a set-piece.

The two-goal lead for Rovers was short-lived, as an empathic finish from Marcel Lewis got Chelsea back within a single goal five minutes after Westbrooke’s strike.

Chelsea then grabbed the equalising goal when a deflected effort from Anjorin found its way passed van Stappershoef.

Just as the game looked set for penalties, a teasing Zain Westbrooke cross was headed home at the far post by Josh Hare in the 90th minute.

Rovers will find out their opponents for the knockout stages during Friday’s draw. 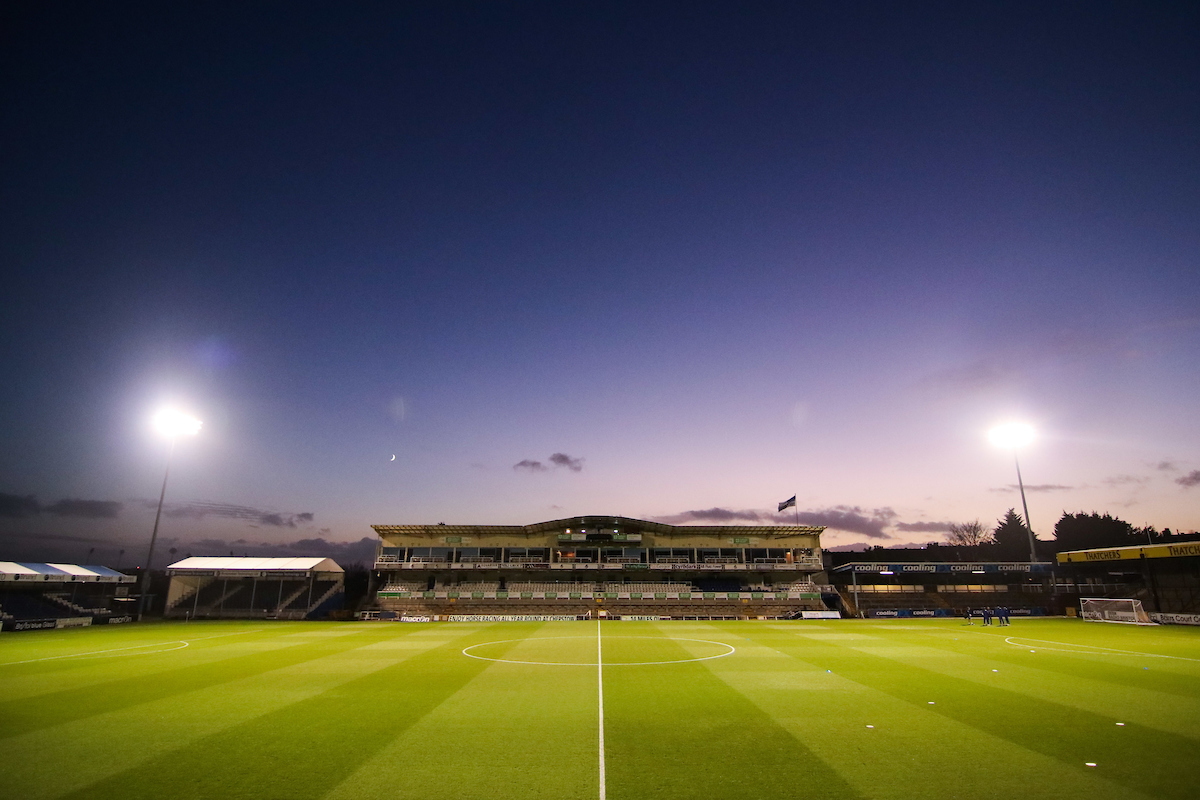 Ahead of the game, Caretaker Manager Tommy Widdrington opted to include five changes to the side that faced Fleetwood in his starting XI for today’s game.

Alfie Kilgour and David Tutonda came into the Rovers defence, at the expense of Ali Koiki and the suspended Jack Baldwin.

In midfield, Ed Upson replaced Luke McCormick, while James Daly and Sam Nicholson were also included in the line-up.

Josh Grant featured in the heart of the Rovers midfield, facing his former side.

On the bench, Josh Barrett was included in the match day squad for the first time this season, following his return to fitness from injury. 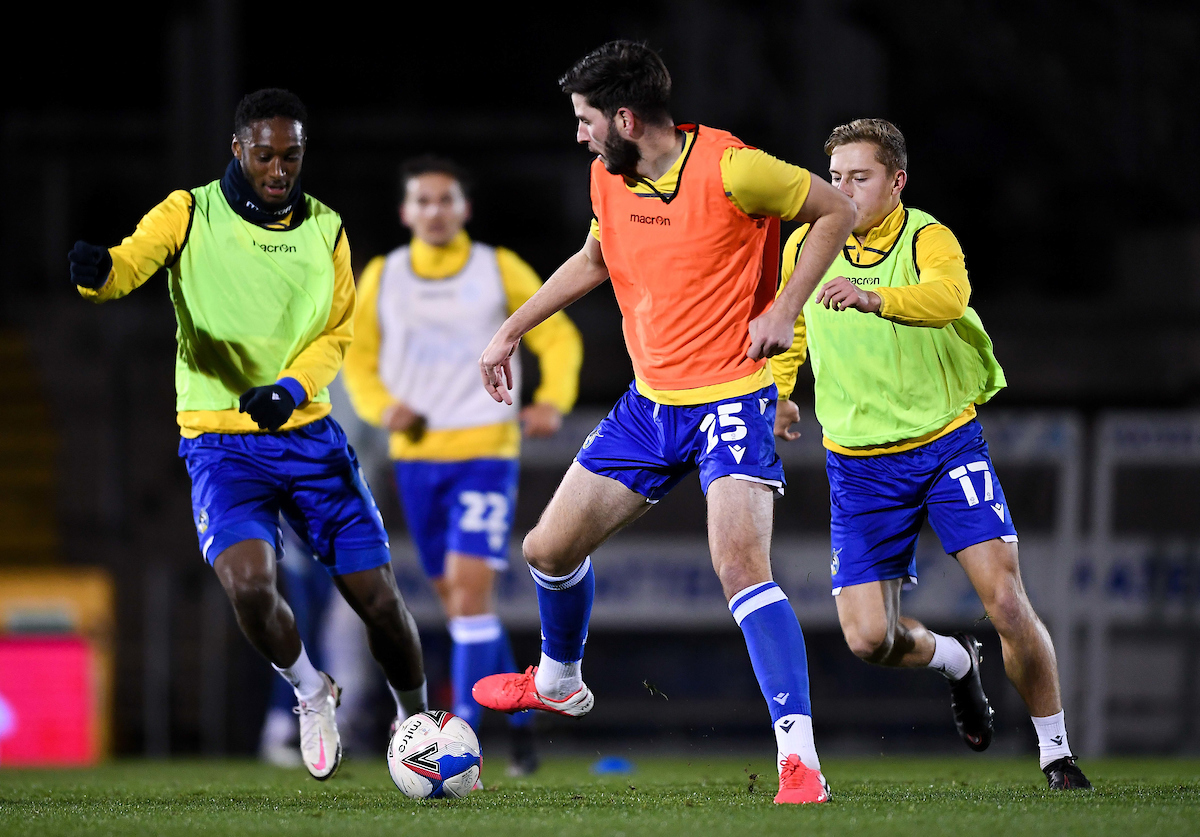 Rovers had the better of the early stages and were first to register a chance on goal, that almost resulted in the game’s first goal. A self-worked chance for Brandon Hanlan saw the striker peel some space inside the Chelsea box, with a forceful low finish beating Ziger in the visitor’s goal.

The Gas’ lead was short-lived, as a minute later Tino Anjorin levelled the scores. It was through ball from Tino Livramento that cut through the Rovers back line, as Anjorin kept his cool to slot a low finish through the legs of the outrushing van Stappershoef.

The tempo of the game was certainly lively, as both sets of teams looked committed to attacking play.

Not downbeat at having their advantage wiped, Rovers were again ahead just minutes after Anjorin’s equaliser. James Daly received the ball on the edge of the Chelsea area and shifted his direction to favour a shot on his left-foot. The forward darted inside the box and produced a forceful effort on goal that Ziger could only palm away, with Sam Nicholson arriving to poke home the close-range rebound to restore Rovers’ lead. 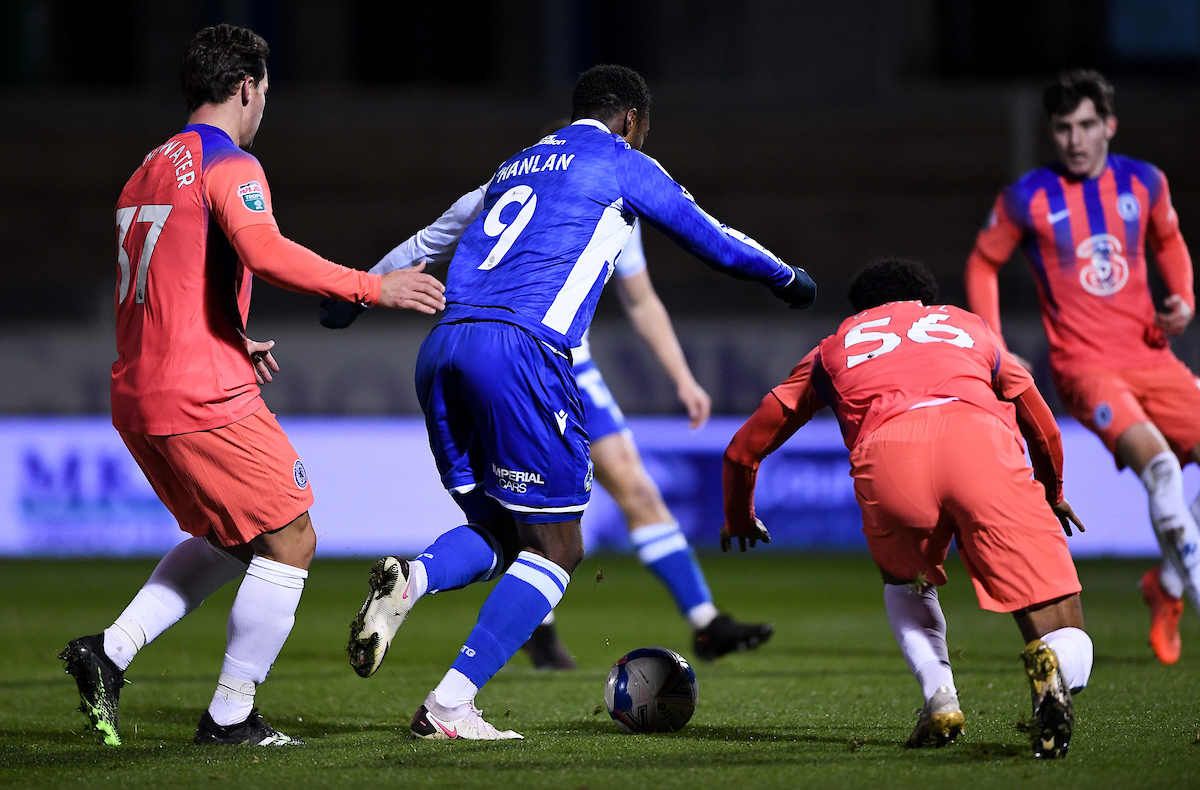 With the confidence of retaking the lead, Rovers enjoyed a good spell of attacking play. Josh Hare saw a free-kick in a central position deflected away from goal, as David Tutonda managed to connect with an acrobatic headed effort that glanced the crossbar, only for the move to be halted by the linesman’s flag.

Rovers still had to be alert to the threat Chelsea possessed, as a move from the visitors down the left saw Charlie Brown flash a low effort fractionally wide the target.

Sam Nicholson seemed to be the catalyst of the majority of Rovers’ attacking play and standout moment of the first-half came when the winger set on a meandering run down the left flank that saw the Rovers man trick and twist his way past two Chelsea defenders on his way into the Chelsea penalty box. From the byline, the winger opted to dart low cross in the six-yard area that ran inches out of reach of James Daly, who would have had the simplest of finishes from close-range.

Before the first-half was done, Nicholson had the chance to add to his goal tally, when a driving run forward opened a shooting opportunity for the Rovers number 11. From the edge of the Chelsea area, Nicholson shifted a low effort wide of the target.

In the last notable opportunity of the half, a diagonal through pass from Drinkwater set Marcel Lewis free down the left. Lewis was able to drive a low delivery across the face of goal, where Tino Anjorin narrowly missed out on connecting with a close-range finish, with Rovers holding their lead at the break.

Rovers made a single change at the break, with James Daly making way for Zain Westbrooke, a move instigated perhaps by Daly taking a slight knock to head in the latter stages of the first half.

Chelsea made their own halftime swap, with George Nunn replacing Charlie Brown. 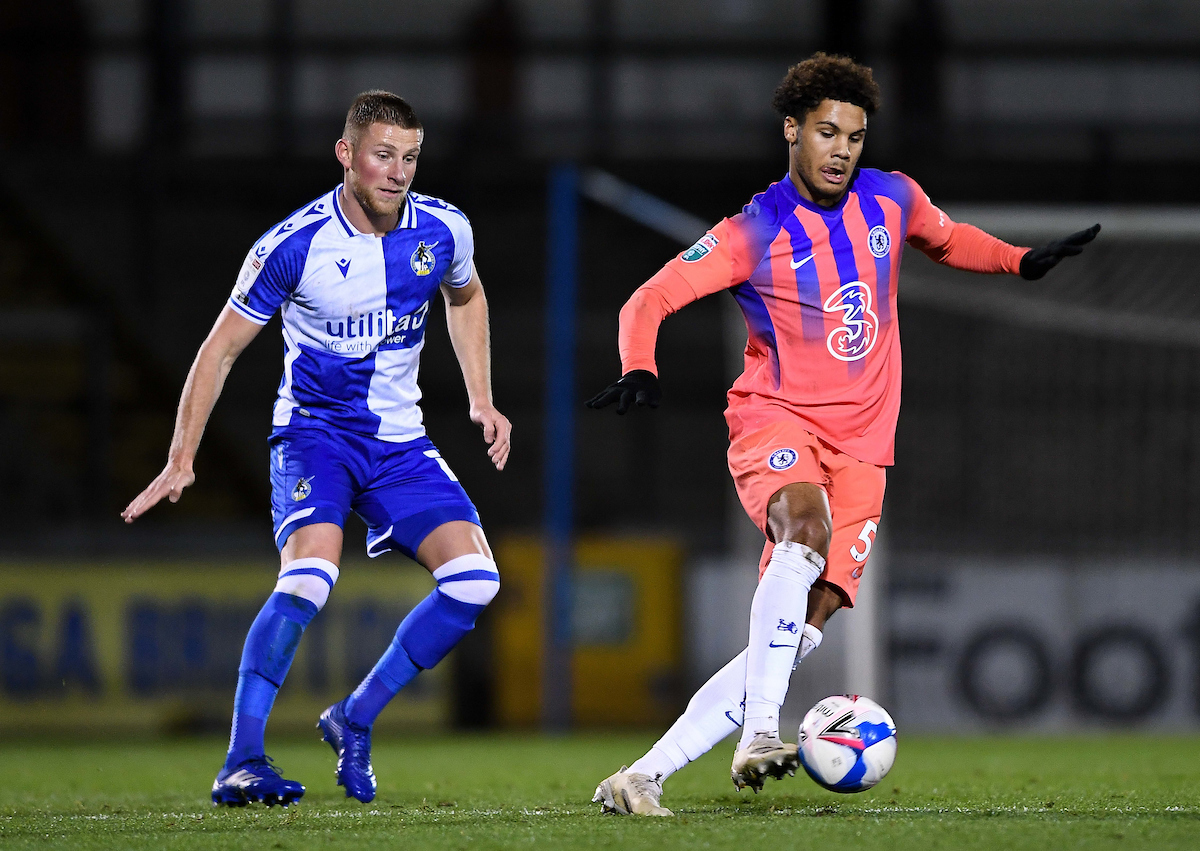 Substitute Westbrooke first impact on the game was to deliver an inviting corner from the right that swung into the jammed Chelsea area. The delivery found Josh Hare, who planted useful looking header towards goal that had to be hacked away by Gilmour, who had stuck to his front post position.

The fourth goal of the game was always going to be crucial and thankfully it fell to Rovers on the sway of the hour mark.

It was substitute Westbrooke who grabbed Rovers third, with the midfielder taking the majority of people by surprise by aiming for goal from a wide set-piece, with the free-kick from Westbrooke flying across goal and into the top corner. 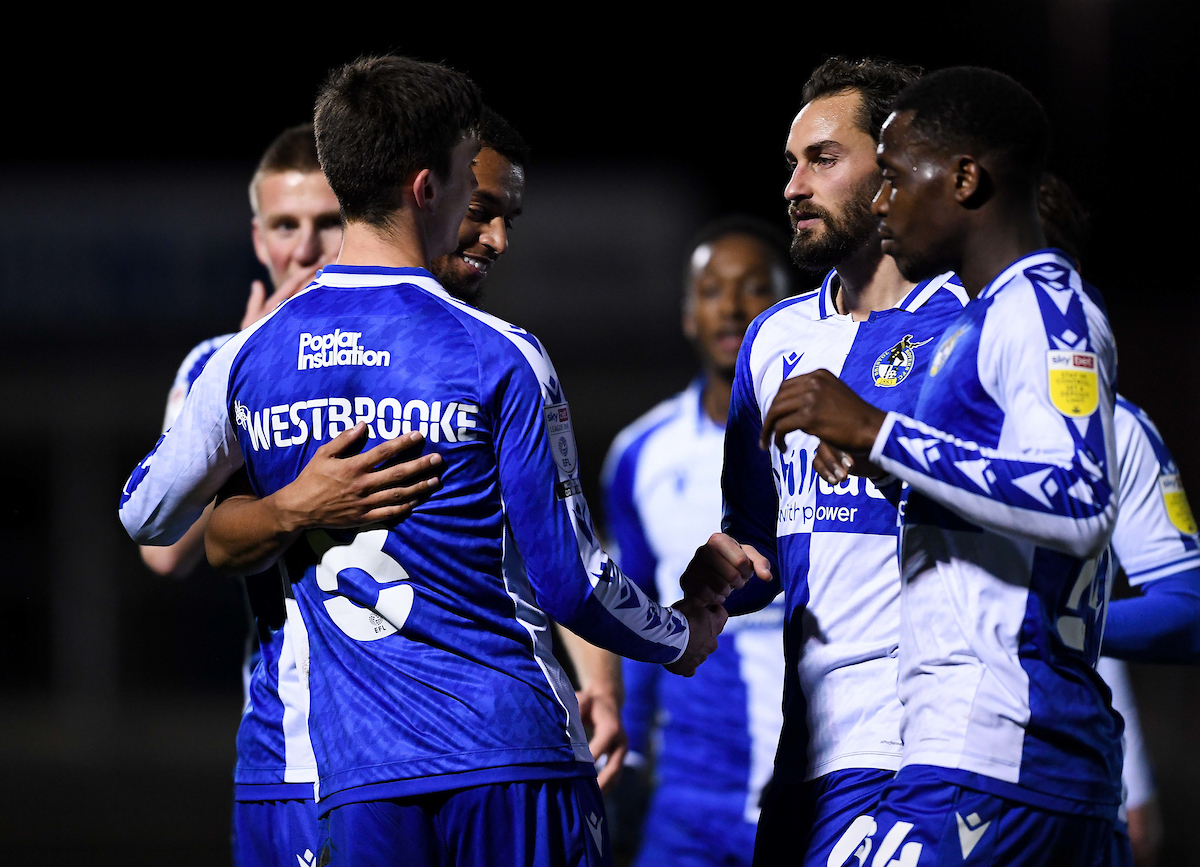 With a two-goal cushion, it should have been pleasant final half-hour for Rovers, that was until a low cross into the Rovers area caused all sort of issues for the host’s defence. The loose ball inside the box finally settled at the feet of Marcel Lewis, who blasted home his finish into the roof of the net to bring Chelsea back within one goal.

With a shift in momentum, five minutes later Chelsea found the equalising goal. Henry Lawrence’s shot from range was directed into the packed goalmouth, where a stray deflection from Anjorin was enough to wrong-foot van Stappershoef In the Rovers goal.

With twenty minutes left and both sides knowing that a win would be enough to take them through to the next round, the game became even more stretched.

van Stappershoef was called on to make an important save, as Marcel Lewis cut inside the Rovers area and targeted a finish inside the near post. While at the other end, Sam Nicholson was played in behind the Chelsea backline and drew a strong stop from Ziger, who got a strong hand to palm the effort wide.

With the final ten minutes approaching, both sides approach became more frantic. Chelsea struck the upright when substitute Lewis Bate’s effort from range clattered onto the frame of the Rovers goal, as Danny Drinkwater sent a long-range effort narrowly over the target.

However, despite the pressure from the away side, it would be the Gas who would secure the winning goal. A superb delivery arrived from the left flank as the game ticked into the 90th minute and Josh Hare arrived late to head into the bottom right. 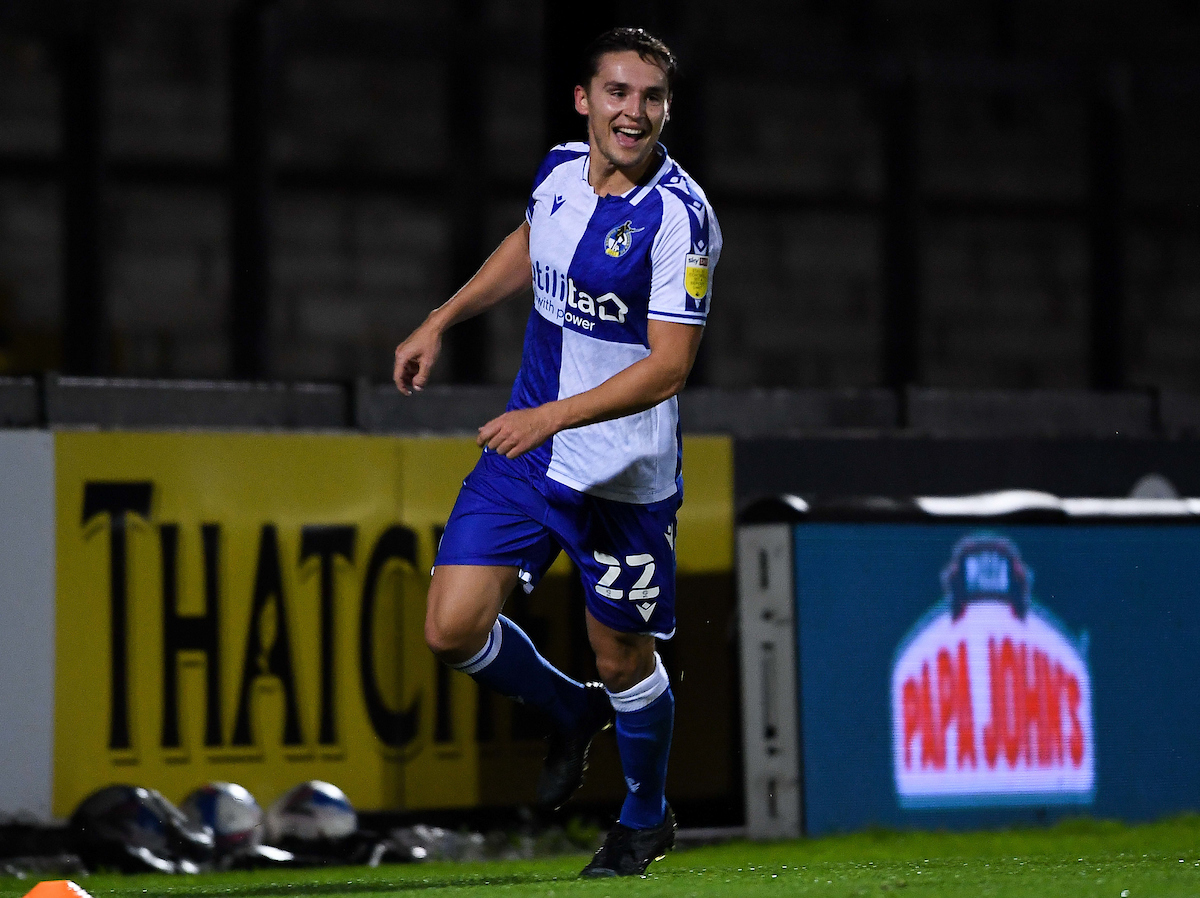 Rovers made the short journey to face Swindon on Saturday in Sky Bet League One, before the more sizeable trip on Tuesday, to face Wigan Athletic.


The kick-off time for our Papa John's Trophy tie against Chelsea U21s has been bought forward to 6pm. 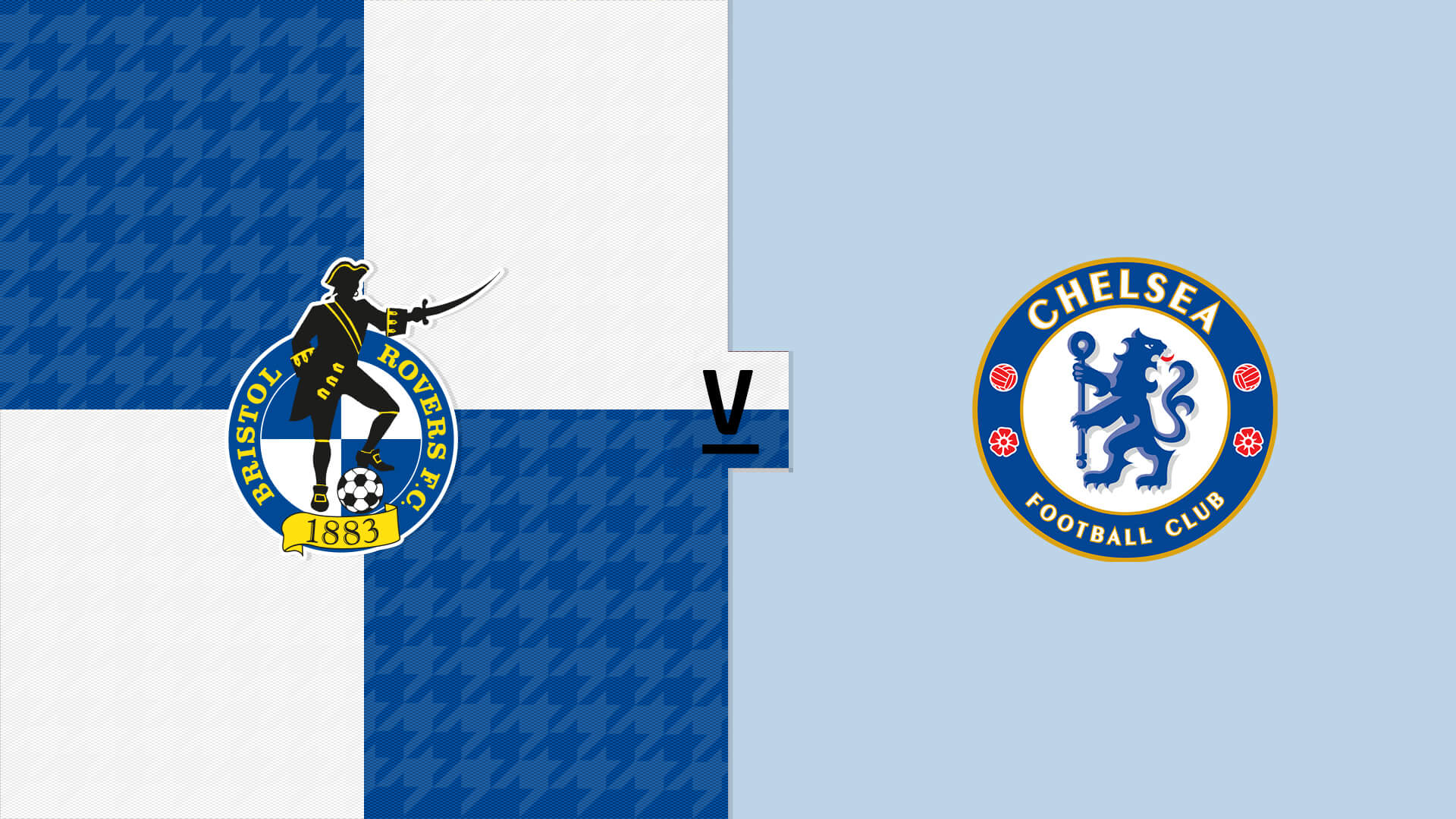 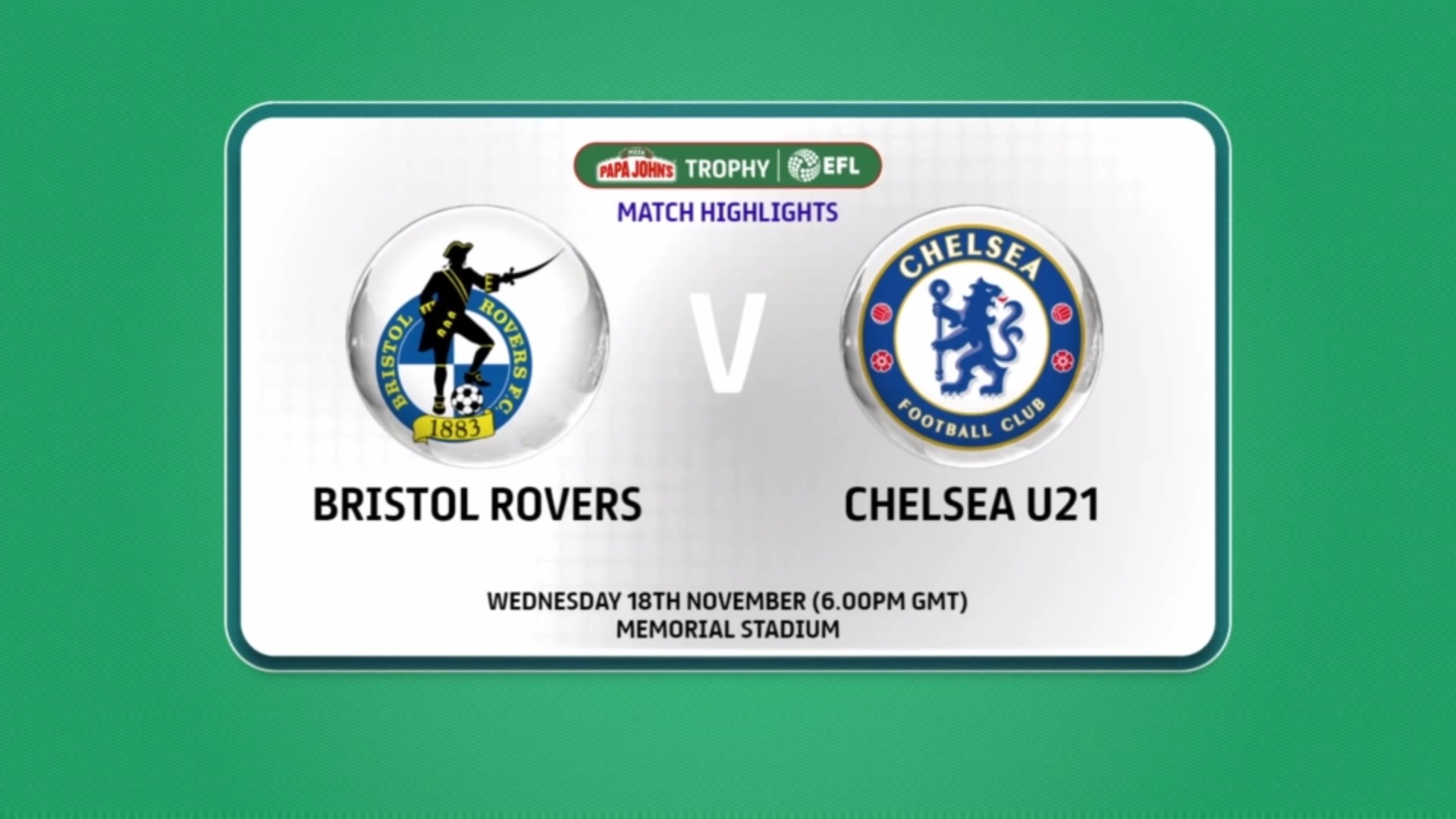 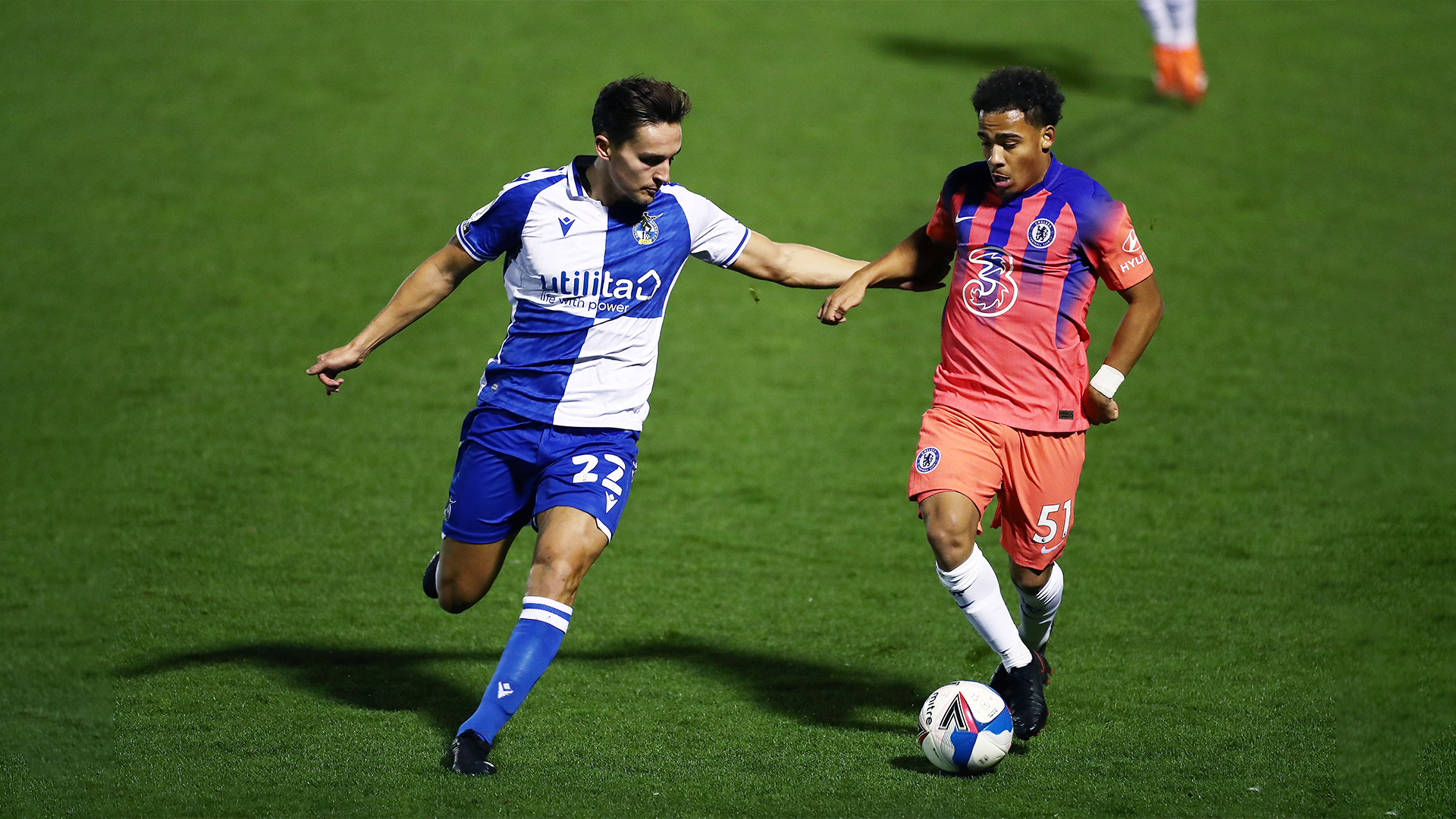