The Gas look to respond as they take to the road again, to take on Fleetwood Town.

Paul Tisdale spoke to the press on Thursday via Zoom to offer his take on the upcoming trip the Highbury Stadium.

Saturday’s game will mark Simon Grayson’s first match in charge of Fleetwood. The former Leeds, Blackpool and Sunderland Manager was appointed last week, replacing Joey Barton, who left in early January. David Dunne, who supported Grayson during his time at Blackpool, joins the coaching setup at Fleetwood too following his sacking in December.

Speaking ahead of the game, Simon Grayson offered some words to his squad, saying to www.fleetwoodtownfc.com "I don't want anyone turning around at the end of the season and saying they wished they'd done this, or wish they'd done that because life's too short for regrets, go and give it your best shot and let's see where we go with it all" 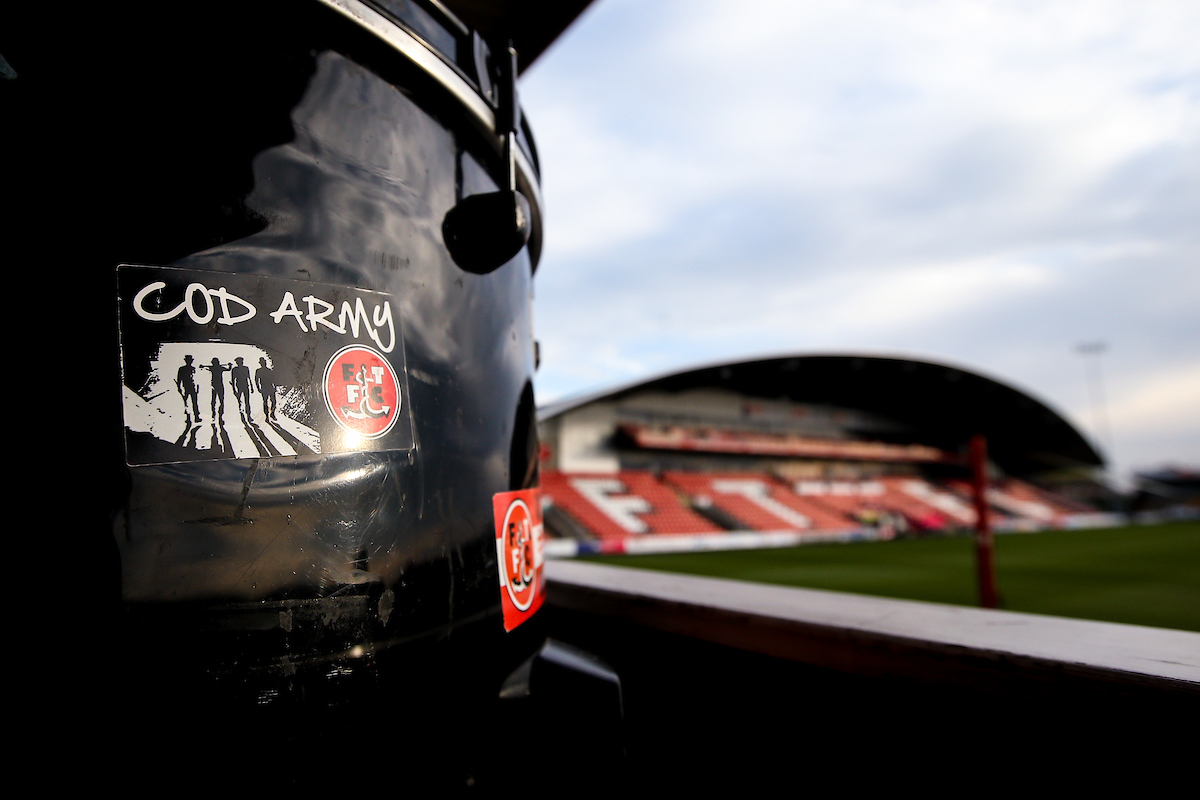 Fleetwood’s last win came on December 12th, with the Cod Army picking up just one win in their last ten outings. In recent weeks, Fleetwood have looked to mitigate their dip in form through staunch defending, securing goalless draws against Wigan and Northampton before losing narrowly to Oxford United at the Kassam Stadium.

Their last win at home game in November. 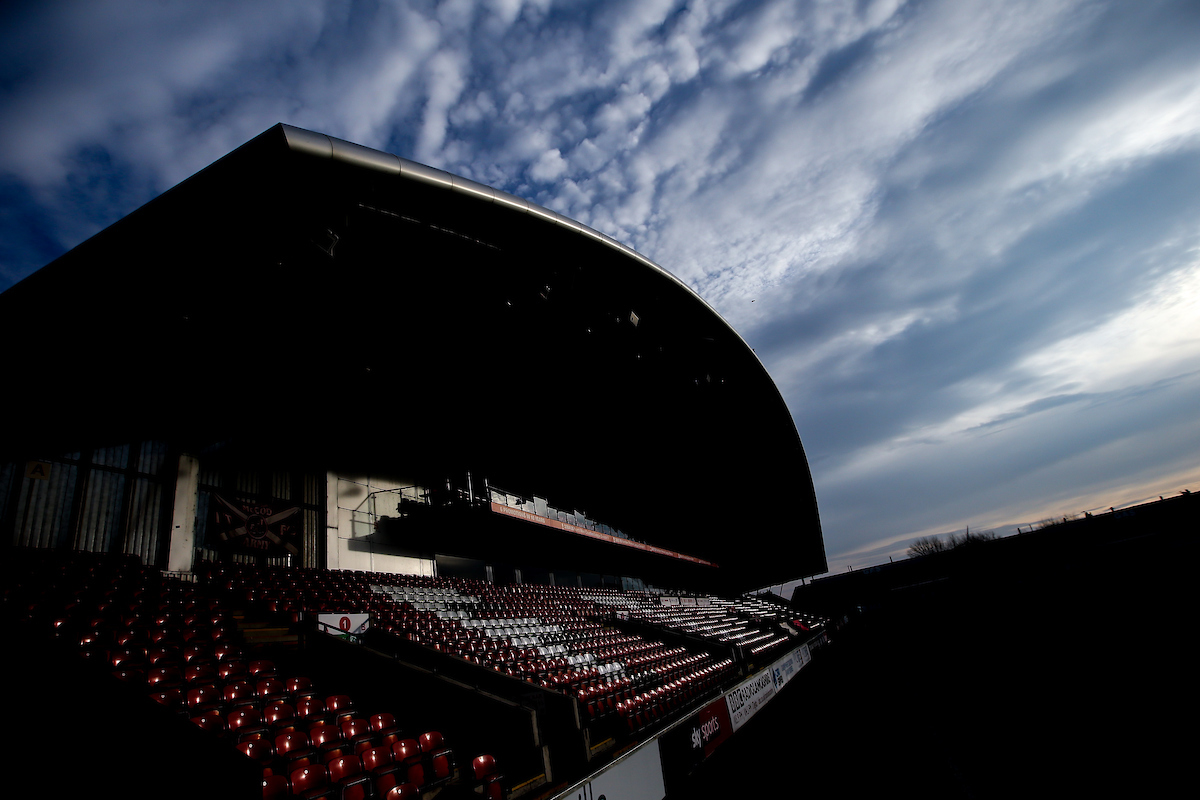 Saturday’s game is available to watch on iFollow - find details on how to grab your pass below...

Rovers secure a point on the road at Fleetwood Town...

A pair of chances for Brandon Hanlan would be the Gas' clearest highlights from their afternoon at Highbury, as the striker rolled an effort narrowly wide from a tight angle in the opening period.

In the second half, he'd get on the end of a fizzed low ball from McCormick, but turned it past the goal at the front post much to Cairns' relief.

Paddy Madden forced the stop of the day though, as he drilled Kyle Vassell's pull-back at Joe Day's goal early on in the second half, forcing a superb acrobatic save low to his right, tipping away for a corner. 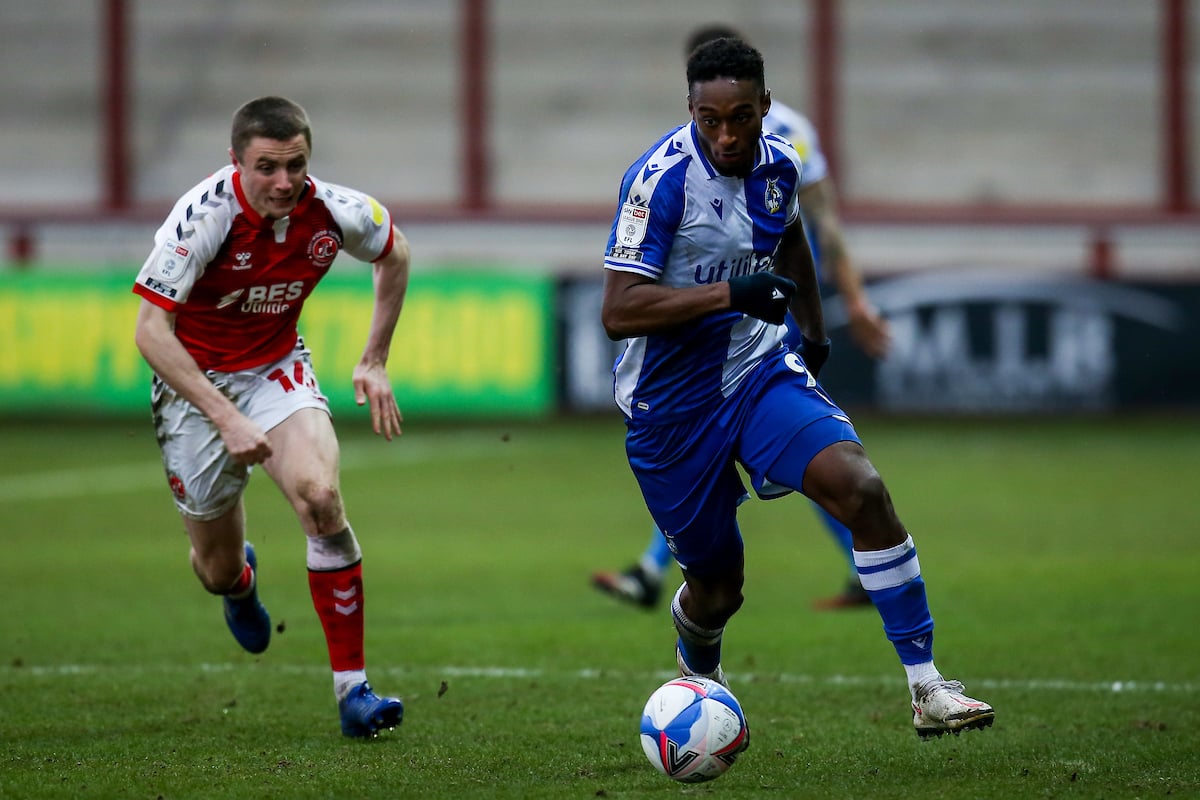 Paul Tisdale promised changes following the midweek defeat to Accrington, not just in application, but in selection too. Ben Liddle would be given his first league appearance for the Gas, while James Daly and Jack Baldwin would both return from injury. 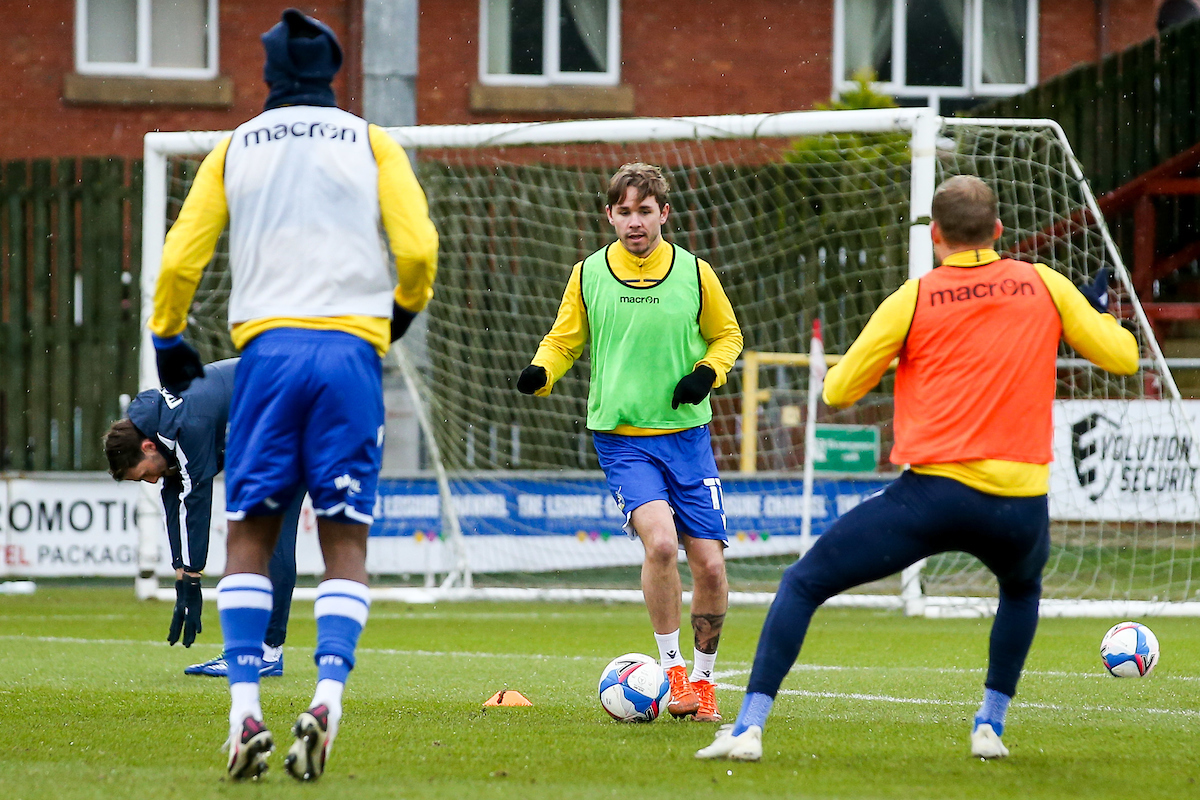 A lot has changed since the Gas last travelled up to Fleetwood, both sides have changed managers, changed personnel, and the small matter of a global pandemic has been thrown in just for good measure. However, the opening stages resembled Rovers' previous trip to Highbury, frustration for either sides, going close but ultimately failing the break the deadlock.

The Gas' first real progression into the Fleetwood danger area came on the 7th minute as Williams darted between two defenders on the right side of the box. A challenge came in, with the right-back looking to have prodded past the tackle, before going down under contact, prompting large appeals for a penalty, but the ref' pointed for a goal-kick.

Almost instantly Fleetwood were up the other end with Madden flashing a strike on goal from the edge of the box, but Alfie Kilgour stood firm, blocking the striker's effort clear. 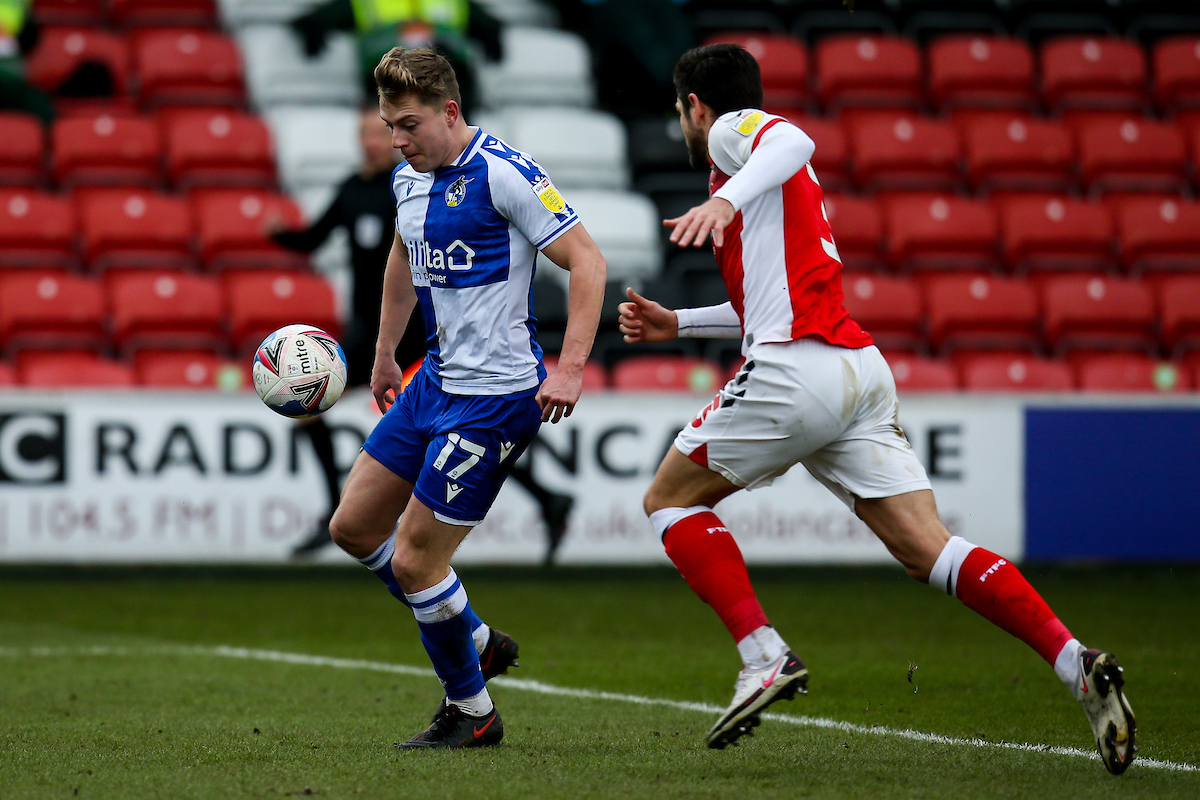 Josh Grant's cushioned header towards Sam Nicholson gave the Scotsman the chance to secure the Gas' first sight of goal just before the quarter-hour mark. The ball bobbled on the ground as Nicholson turned 25 yards out, smashing a strike early, but guided it left of the post from distance.

Brandon Hanlan would secure the game's next chance inside the next five minutes as Leahy clipped a neat ball towards the forward. Expert control allowed him to bring the ball down inside the box at a tight angle. He opted to strike low towards the far post, rolling it narrowly wide.

James Daly was next to take aim, slipping in behind the Fleetwood defence before attempting to prod an unorthodox effort towards goal, almost cushioning it goalward. The 'keeper had his arm raised appealing for an offside, but the flag stayed down, as Daly poked it just wide of Cairns' goal.

Brandon Hanlan looked to have spun Danny Andrew inside the Fleetwood box on the 35th minute, with Hanlan going down as he began to pull away from his man. Once again loud appeals echoed round the ground, but the ref' said no penalty. 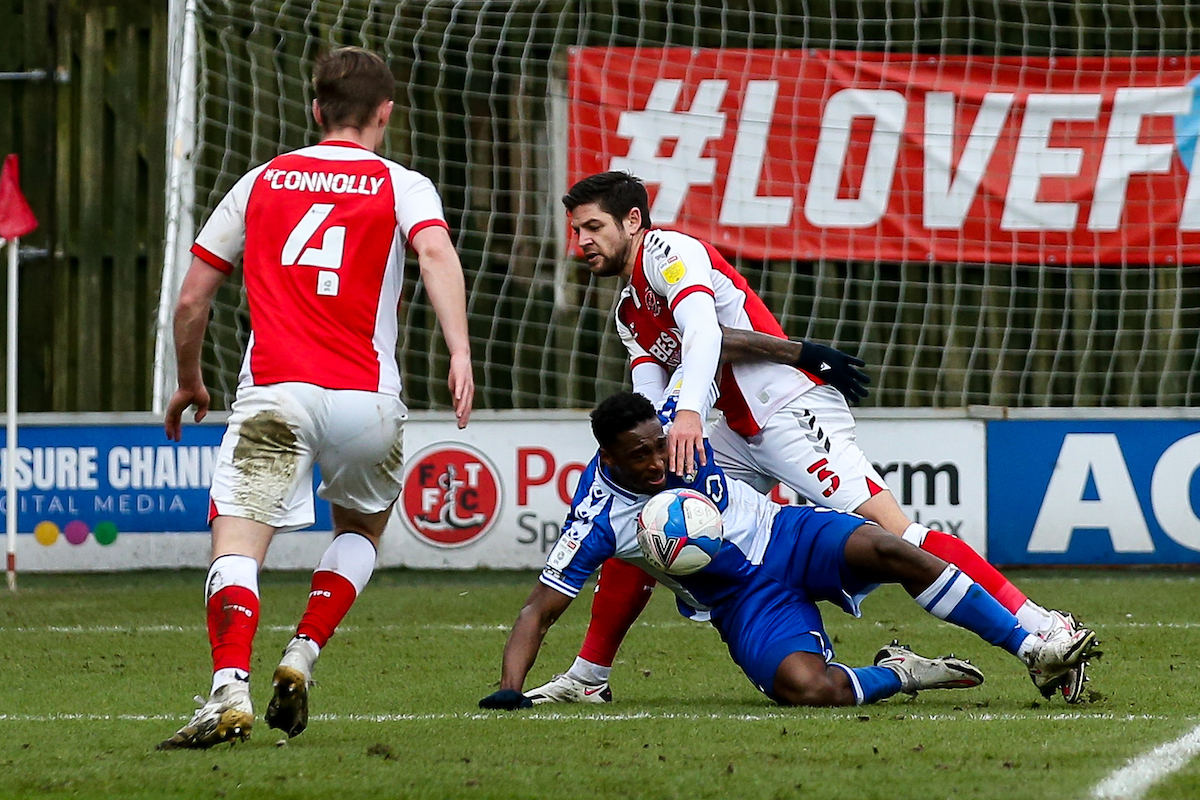 Rovers continued to cause problems in the dying stages of the half, as Luke Leahy delivered a cross towards Sam Nicholson. The winger dove forward to head down towards goal, but miscued slightly and nodded it square across the box, with no-one able to prod in. Nicholson would strike again soon after, rocketing an effort high and wide from distance though. 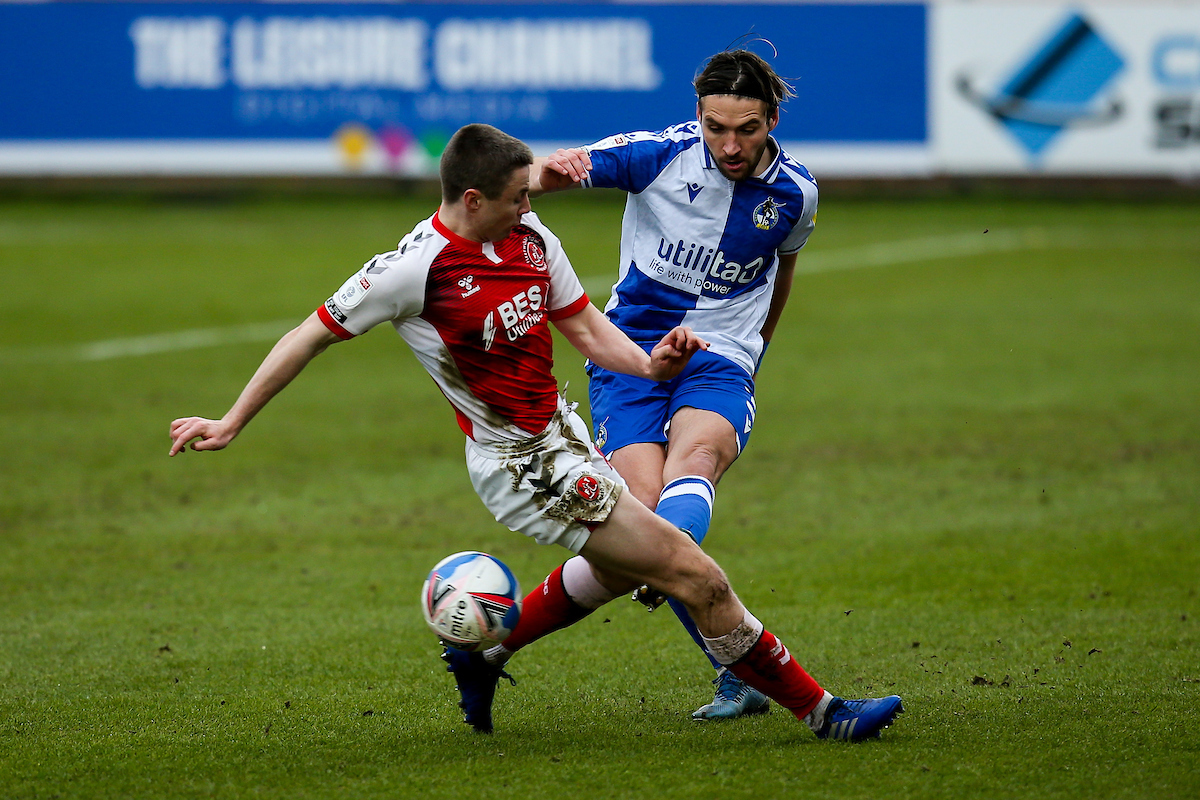 Following the break, Fleetwood Town returned to the form they were showing early in the early stages of the first half, making the first chance of the second period. Vassell was able to bring the ball down on the right side of the box before squaring it back across to Paddy Madden, the forward struck low with venom but Joe Day was on hand to dive low and tip wide, a superb save from close-range.

Donacien would force another save on the 51st minute, cutting in from the right and striking with his left towards the near post from distance. A much easier effort for Day in goal, landing on the ball and keeping hold.

Kilgour, looking to urge his side on after early pressure from the home side, strode forward into Fleetwood's half with a surging run. He looked up and spotted Cairns out of position and opted to strike from 35+ yards, his effort sent Cairns scrambling but saw it swerve wide.

The defender would then look to capitalise on the Gas' next chance as an out-swinging corner arrived from the left flank, Kilgour rose highest but steered his header just wide at the back post, running away showing visible frustration. 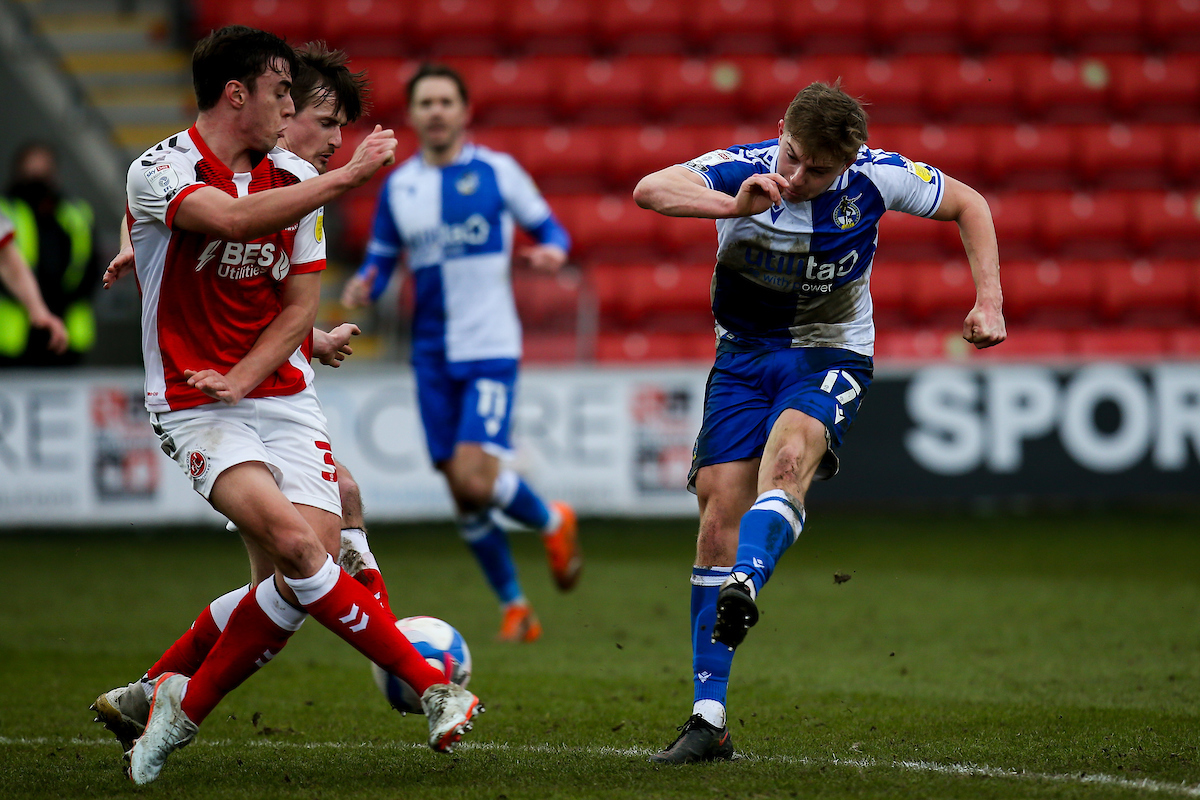 Day needed to be alert just after the hour mark as Lee Camps struck a dipping free-kick over the ball, it dropped at a nice height for the Cardiff-loanee, who punched to safety. Moments later, the Gas made their first change, with McCormick coming on for Liddle.

McCormick would be integral to the Gas' next chance, poking the ball through the legs of his man before speedily rounding him. He smashed the ball back across the box to Brandon Hanlan at the front post, who just poked narrowly wide.

As Hanlan picked himself up, Rovers made their next change, with Rodman replacing Daly. Brandon Hanlan would make way for Jonah Ayunga on the 83rd minute.

A knock-down from Ayunga towards Luke Leahy almost spawned a late chance, but the ball didn't quite fall for the left-back, ricocheting off his thigh to the Fleetwood defence. Leahy would then look to provide for the winner seconds later, smashing a low cross in towards the run of Nicholson. The Scotsman prodded the ball out from underneath himself but slid his shot just wide of the goal from the front post. 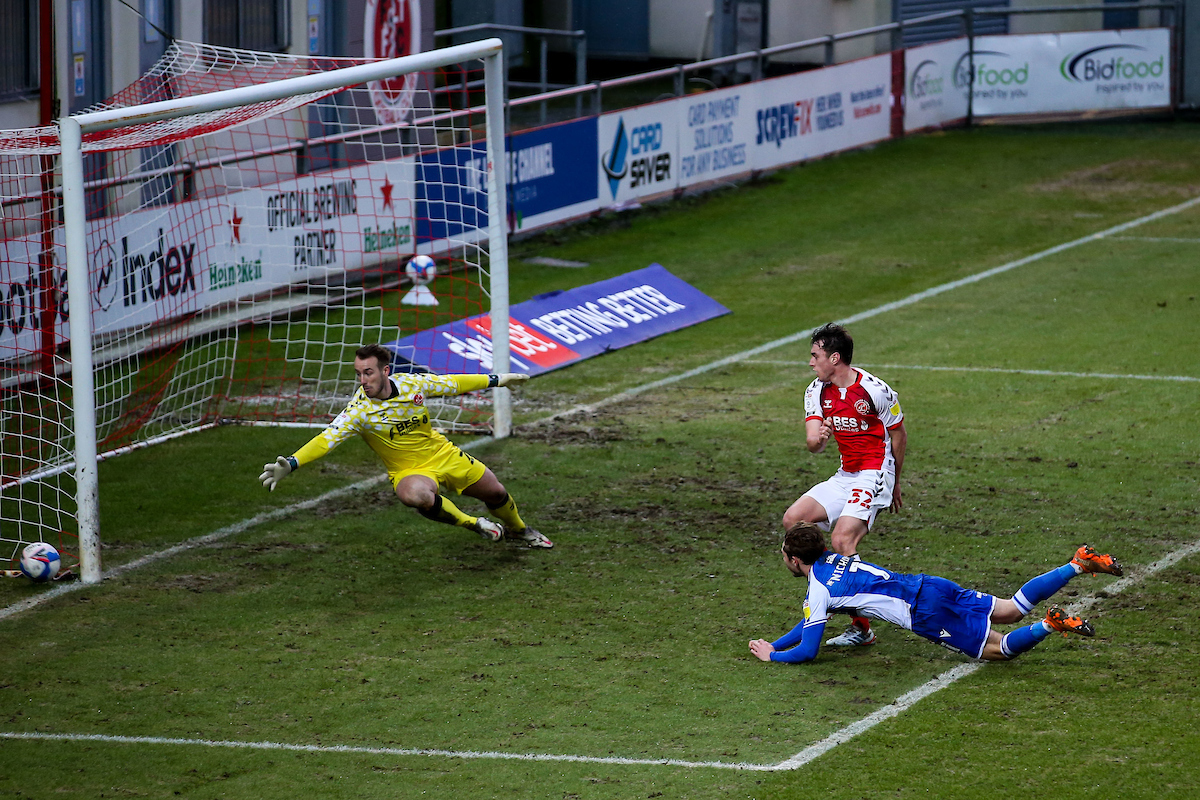 The frustration mounted as Rovers searched for a winning goal, but couldn't find the crucial opening, with the game ending goalless after added time.

Rovers play host to Oxford United on Tuesday evening down at BS7. 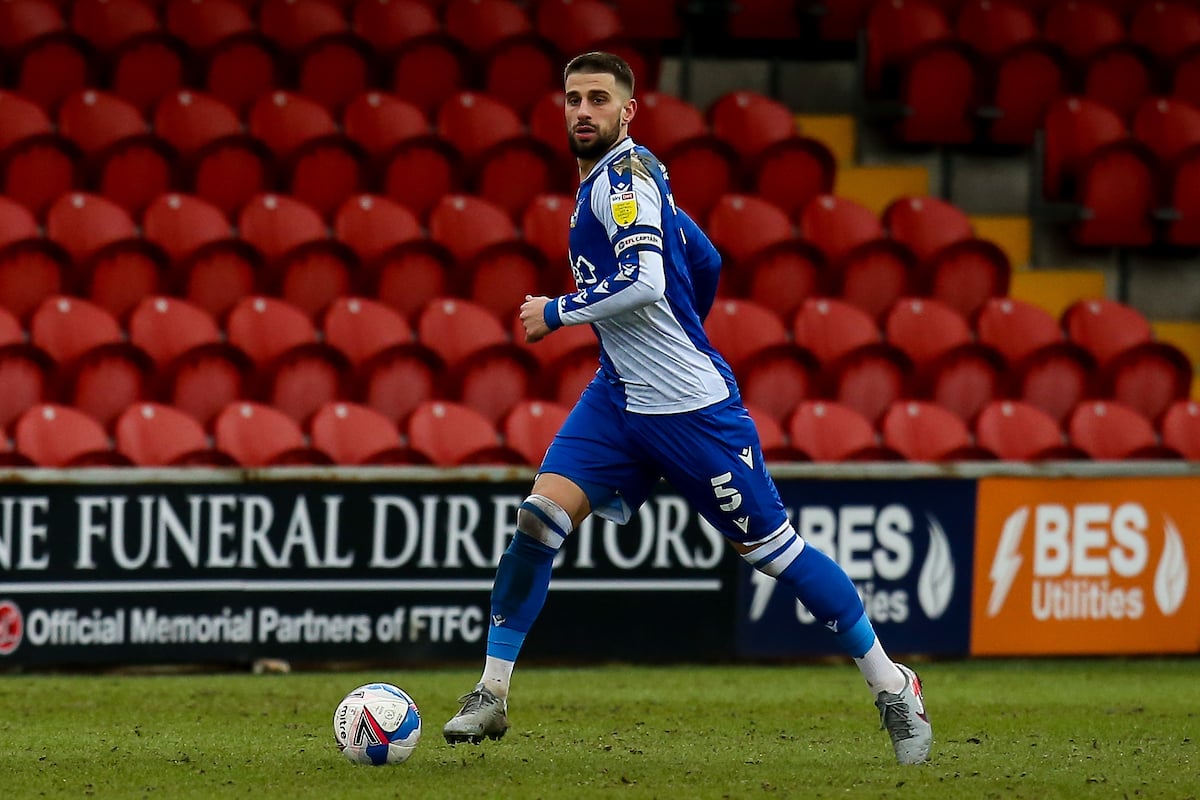 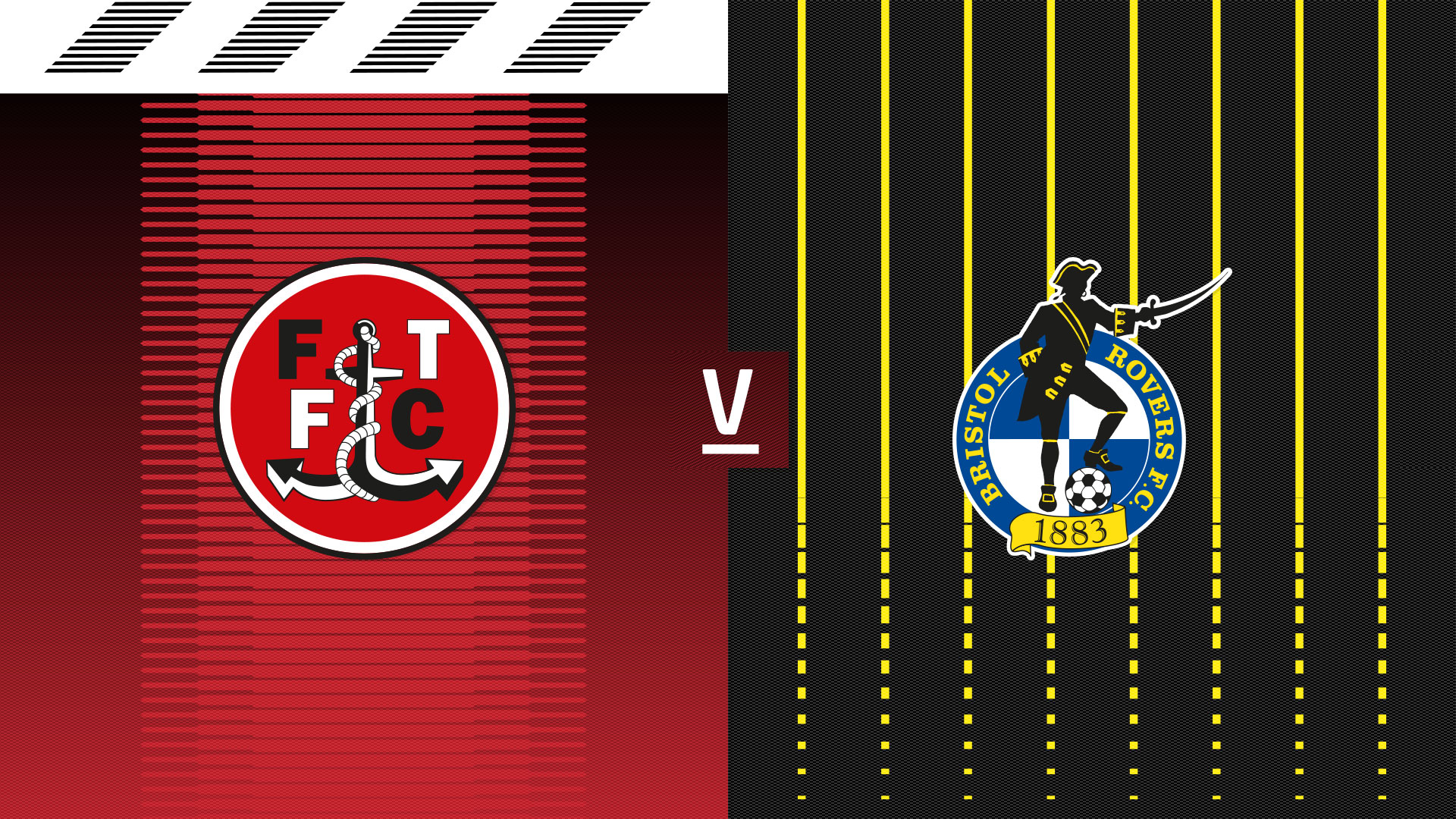 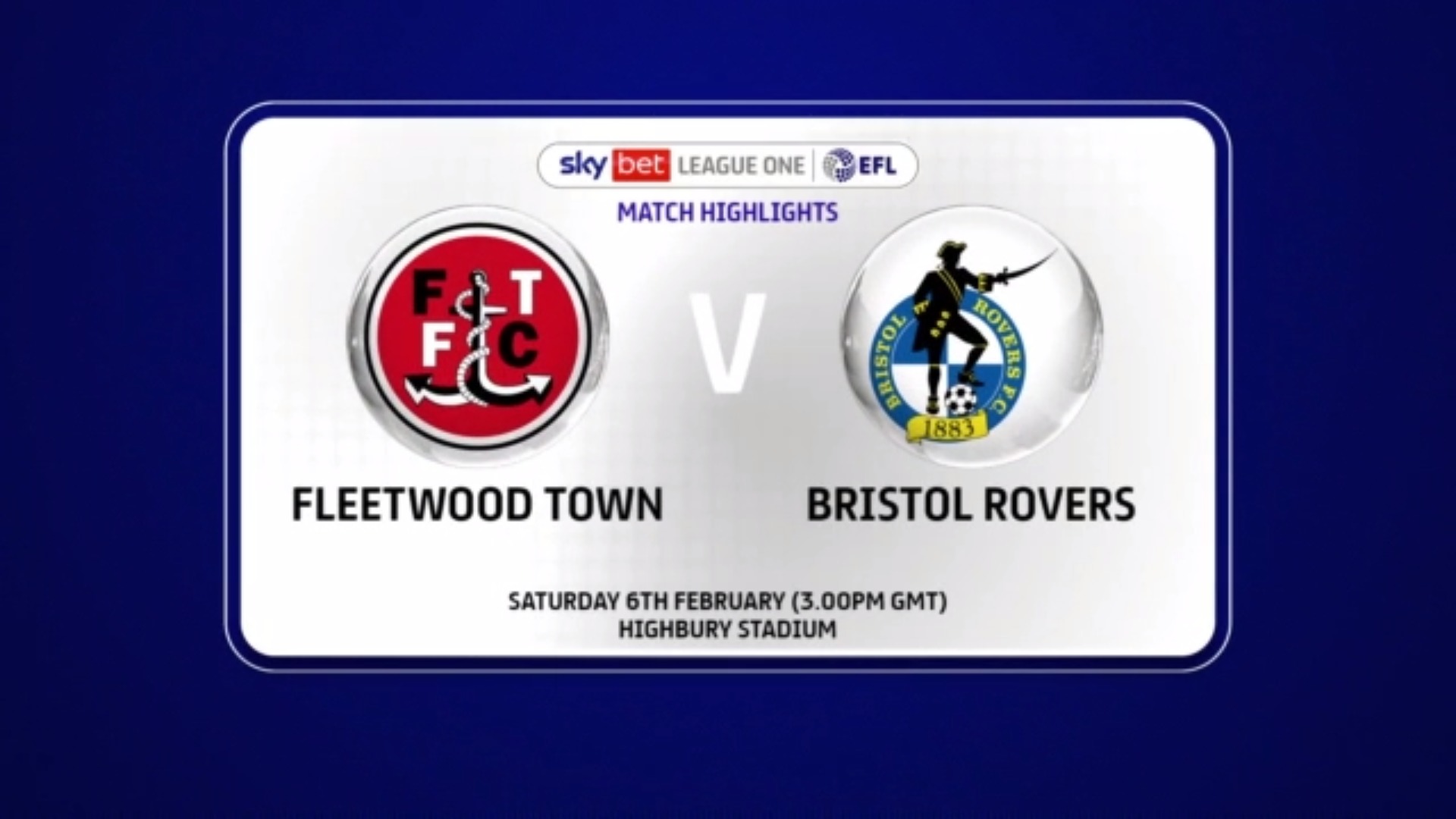 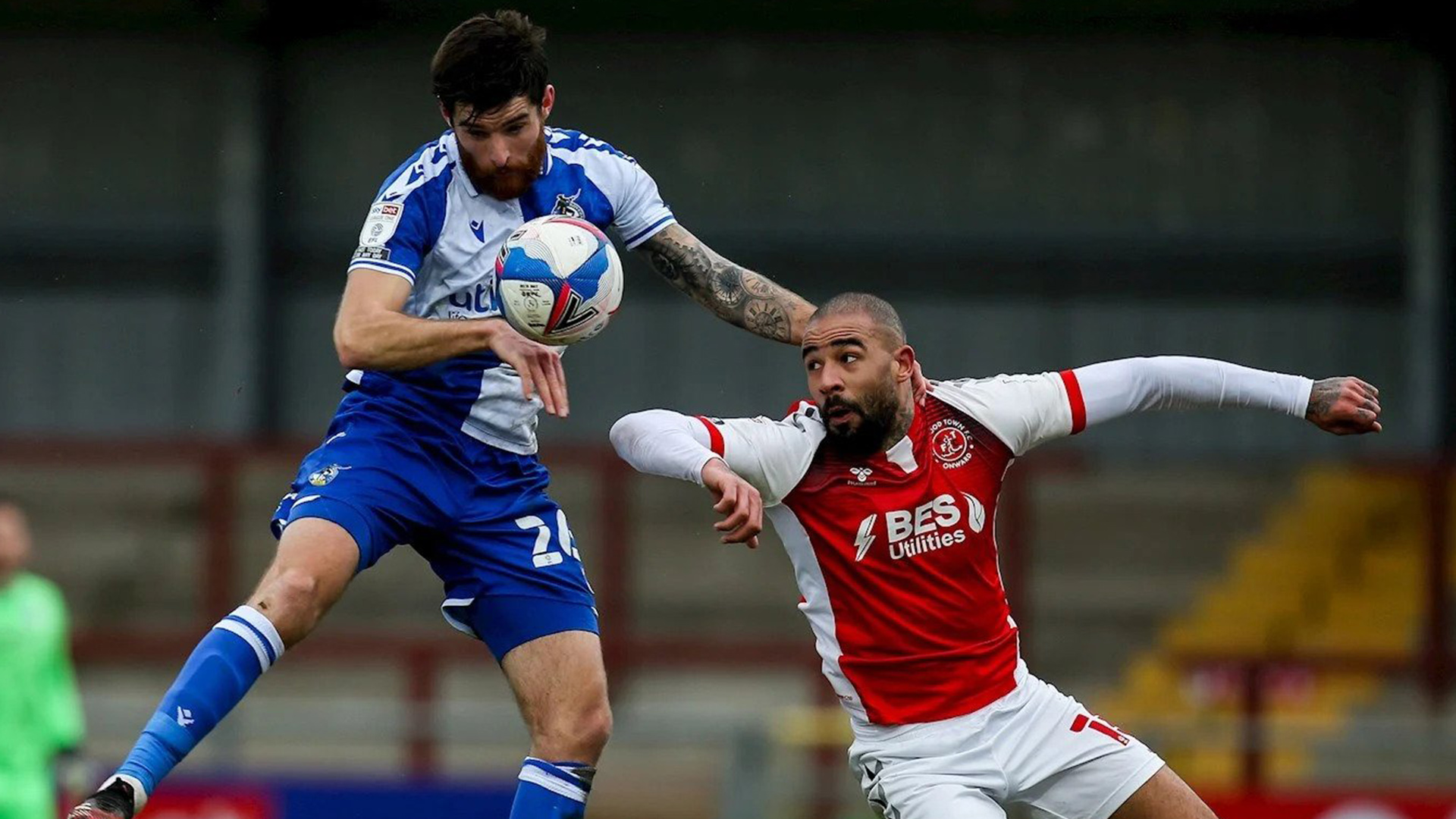