Following defeat on Saturday against Gillingham, and a busy Monday morning, we take a look ahead to the Gas' home meeting with Wigan Athletic on Tuesday night at 7pm.

Back Rovers from home for Joey Barton's first game as manager with a £10 iFollow match pass!

Fresh from his announcement as Rovers manager on Monday morning, Joey Barton caught up with the club's media to talk through his approach to both the job, and Tuesday night's game...

Wigan's attacking pairing of Will Keane and Kyle Joseph lead the way for the club's goalscoring endeavours, with five goals to their name each so far this season. The Latics have found the net on eight occasions through set-pieces, accounting for 28% of their overall goals this campaign.

Including their other meeting with the Gas this season, Wigan have achieved 5 clean sheets across all competitions.

EFL sponsors Sky Bet have Rovers priced at 6/5 to take the three points on Saturday, with a 1-0 scoreline to Rovers offered at 13/2. Brandon Hanlan is matched at 17/10 to score at any time, with Sky Bet offering a price boost of 9/2 on Rovers to win and both teams to score.

Man in the Middle

Carl Brook will take charge of Tuesday's encounter. In his 19 games so far this season, Brook has handed out 68 yellow cards and 2 red cards. He hasn't yet officiated on Rovers.

The Gas met Wigan Athletic earlier in the season at the DW Stadium in what would result in a 0-0 draw. Sam Nicholson would go closest in the encounter, rounding the 'keeper before being denied on the line by a retreating defender. Catch the full highlights below.

Rovers met Wigan in the backend of the 2017/2018 campaign in Sky Bet League One, with Liam Sercombe scoring the first goal of the tie at the Mem before Ryan Colcough equalised for the visitors late on after coming off the bench.

Joey Barton takes his first Rovers game when the Gas meet Wigan, catch it all live on iFollow with a £10 match pass - find all the details on the coverage below... 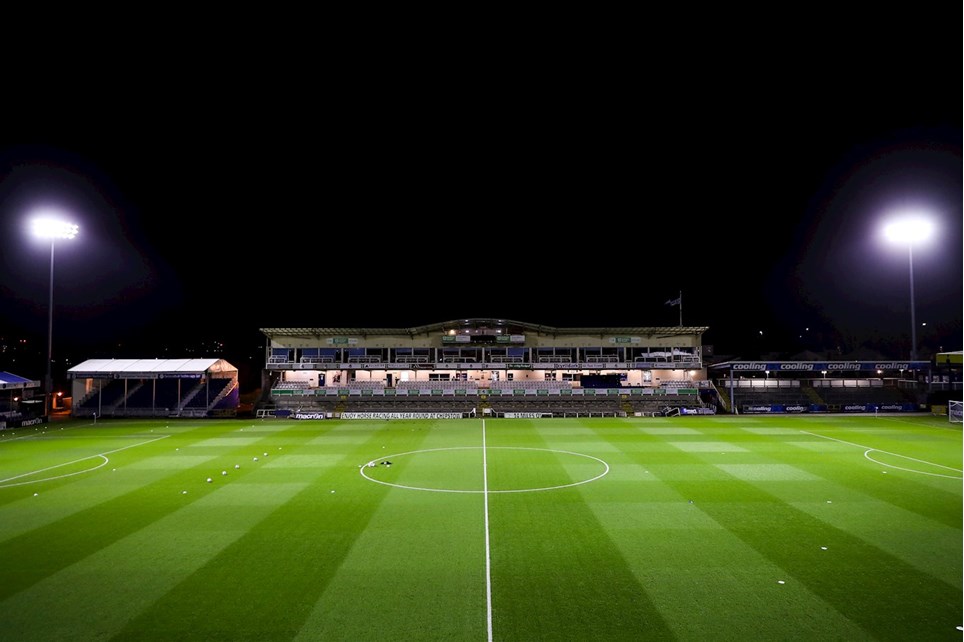 
Our Sky Bet League One fixture at the Mem against Wigan Athletic on 23rd February will now KO at 7pm.

An added time winner for Wigan sees the Gas defeated at the Mem...

A first-half of consistent brought no goals for the Gas, which made conceding early on in the second period even more frustrating as Callum Lang redirected a cross in at the far post.

Rovers showed spirit though, reacting well and bursting onto the front foot ahead, and this would create a crucial opening, with Hanlan unleashing McCormick who would cut in sharply to level things up.

A late Scott Woottomn goal would condemn the Gas to defeat though, as he got on the end of a free-kick to divert home in added time. 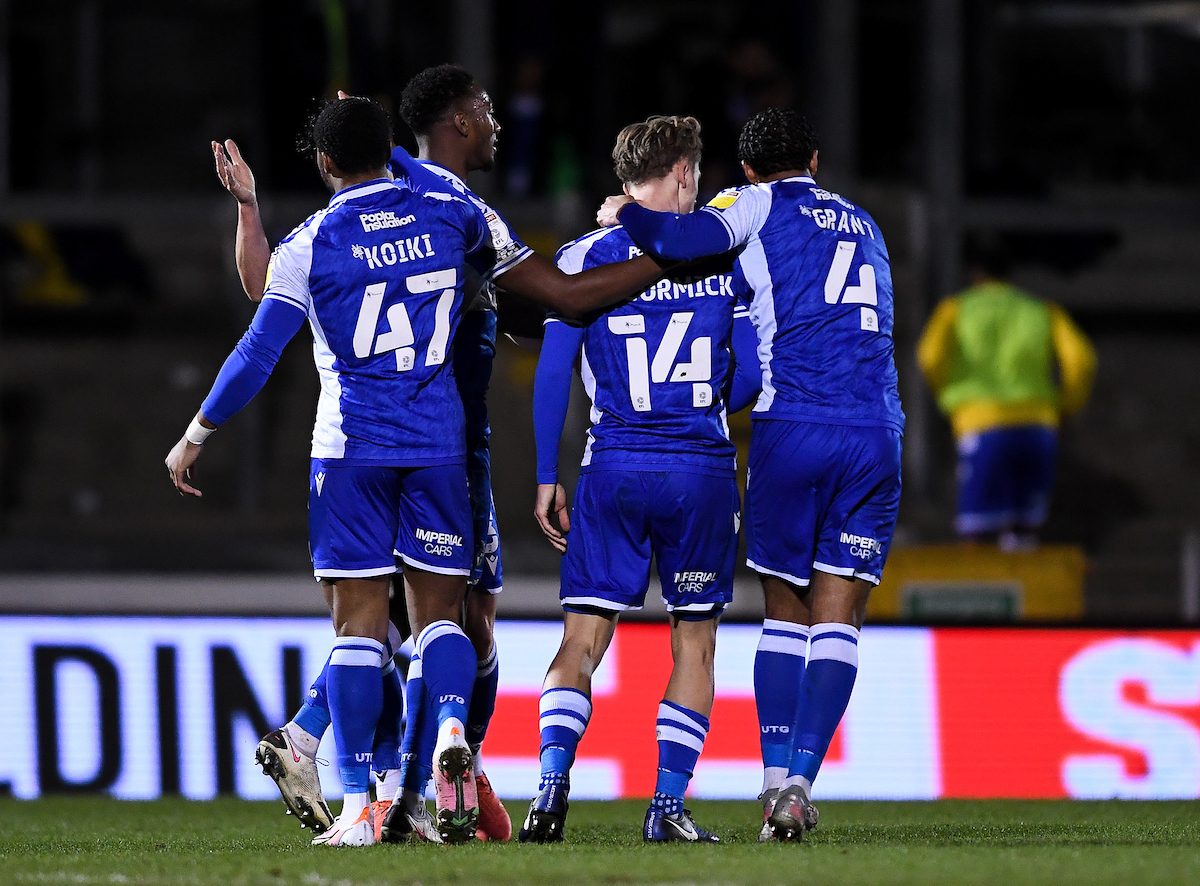 Joey Barton opted to bolster his side with experienced heads as Rovers took the field for the first time under his stewardship. Ed Upson returned from injury in a timely manner to start in Barton's first game, replacing Jack Baldwin prompting a tweaked formation from the Gas' last outing. Alex Rodman also got the nod in the starting XI, coming in for Jonah Ayunga. Sam Nicholson also started, in place of James Daly. 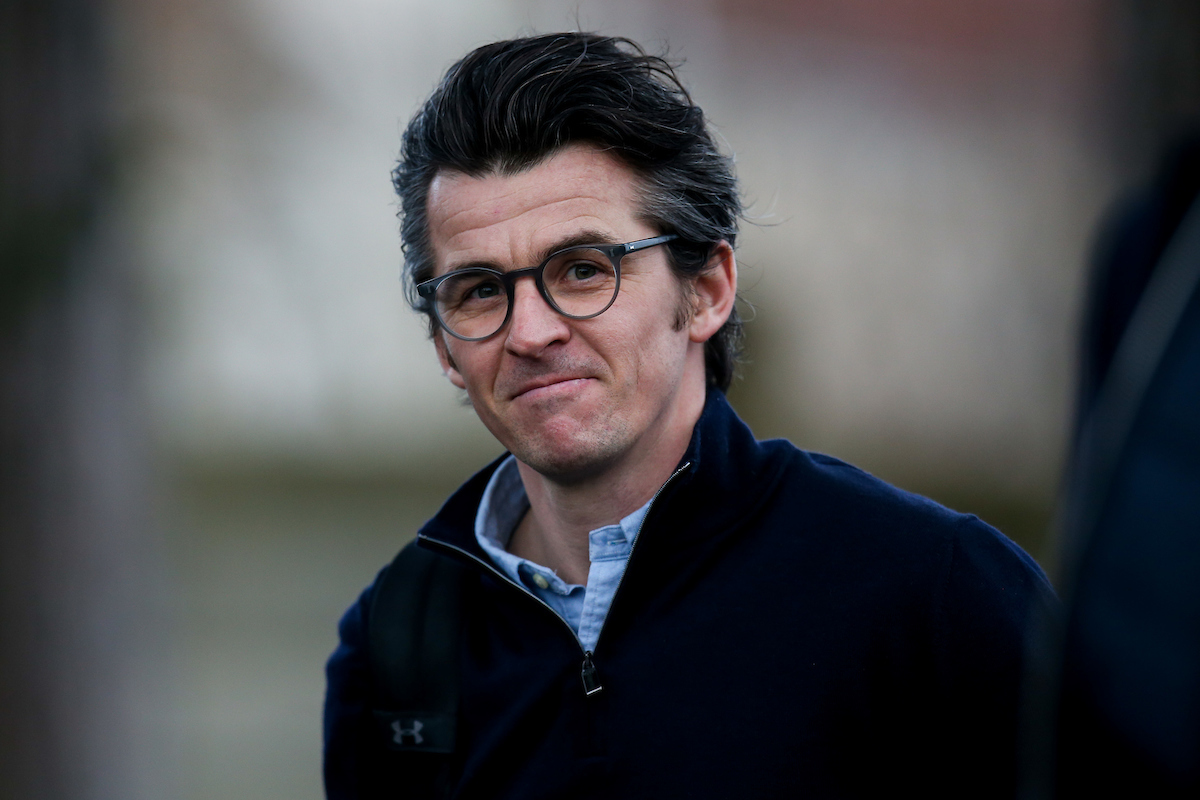 Rovers started brightly, working an opening inside 2 minutes with neat play between Williams and Rodman. Rodman cut towards the apex of the box before hitting a cross with his left foot towards Hanlan. Under pressure Hanlan managed contact, flicking it towards the far post, partly for the run of Sam Nicholson, but it passed through the space and out for a goal kick.

Moments later Alex Rodman would head a Luke McCormick corner into the ground, sending the ball bouncing into the floor and ricochetting up towards the roof of the net. It took a superb reaction from Jones to tip the ball clear of his bar, springing well to track the ball's flight and remove the danger. 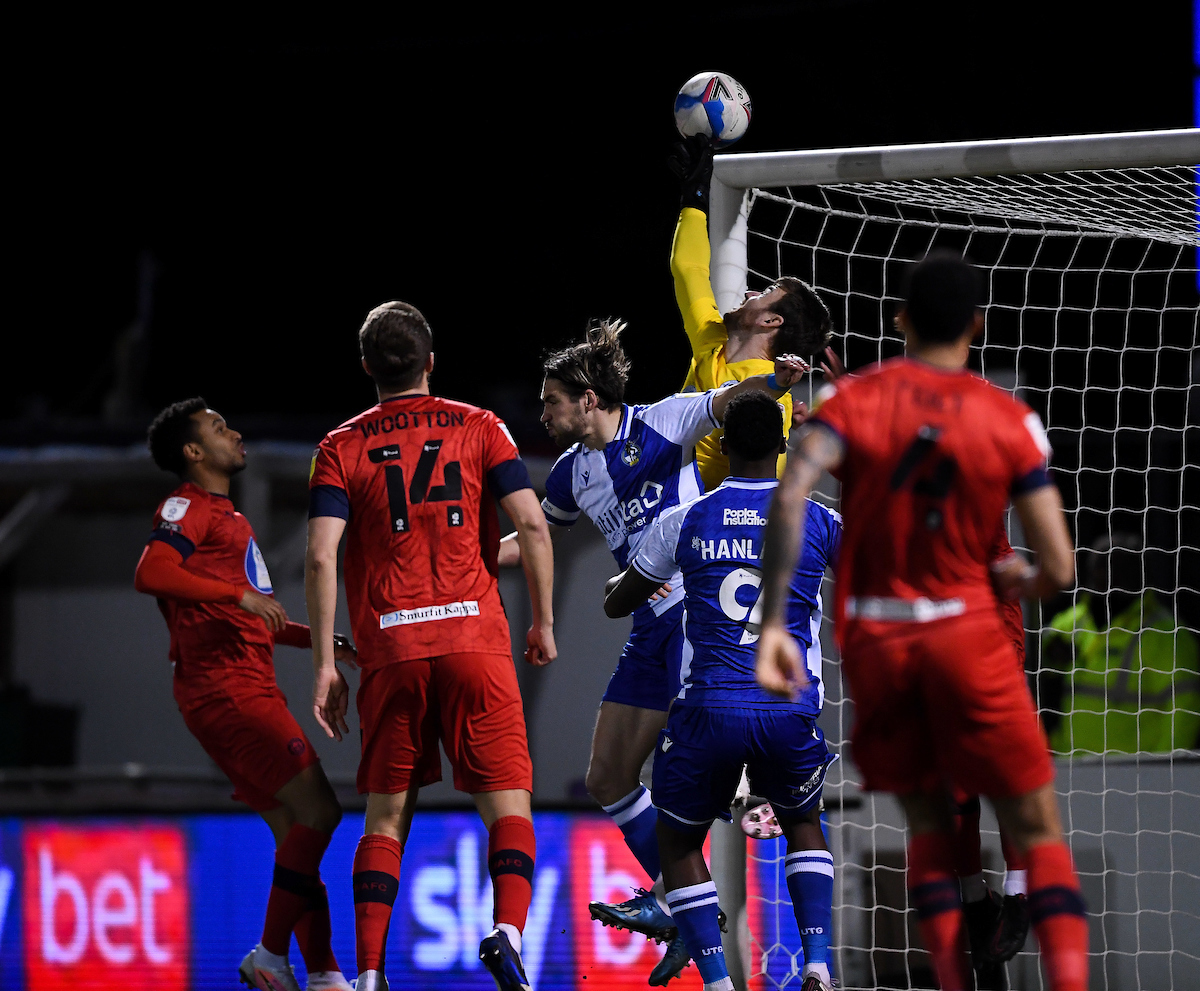 The game quietened down soon after, with both sides restricted to partial sights of goal, with no real opportunities of quality coming their way.

Sam Nicholson would find the next sight of goal, around 20th minute, expertly controlling a deflection before cutting in from the left flank, he unleashed a shot from the centre of the box with his right but saw it blocked clear by Curtis Tilt. Rovers recycled though, with Nicholson's left-sided partner Leahy jinking his way through from the left flank towards the box. He eventually unleashed a laced shot from the angle but saw it blocked at close range.

Nicholson then took another turn, volleying a deflection from the left side of the area towards the far post. It cleared the onrushing Latics defence but went narrowly wide.

Up the other end, Wigan came close. A brave block from a press on the Rovers backline saw a deflection fall favourably for Solomon-Otabor, who burst his way into the box. As he looked up to fire at Joe Day's goal, he saw the outstretched leg of Cian Harries emerge, to slide clear as Solomon-Otabor pulled the trigger. 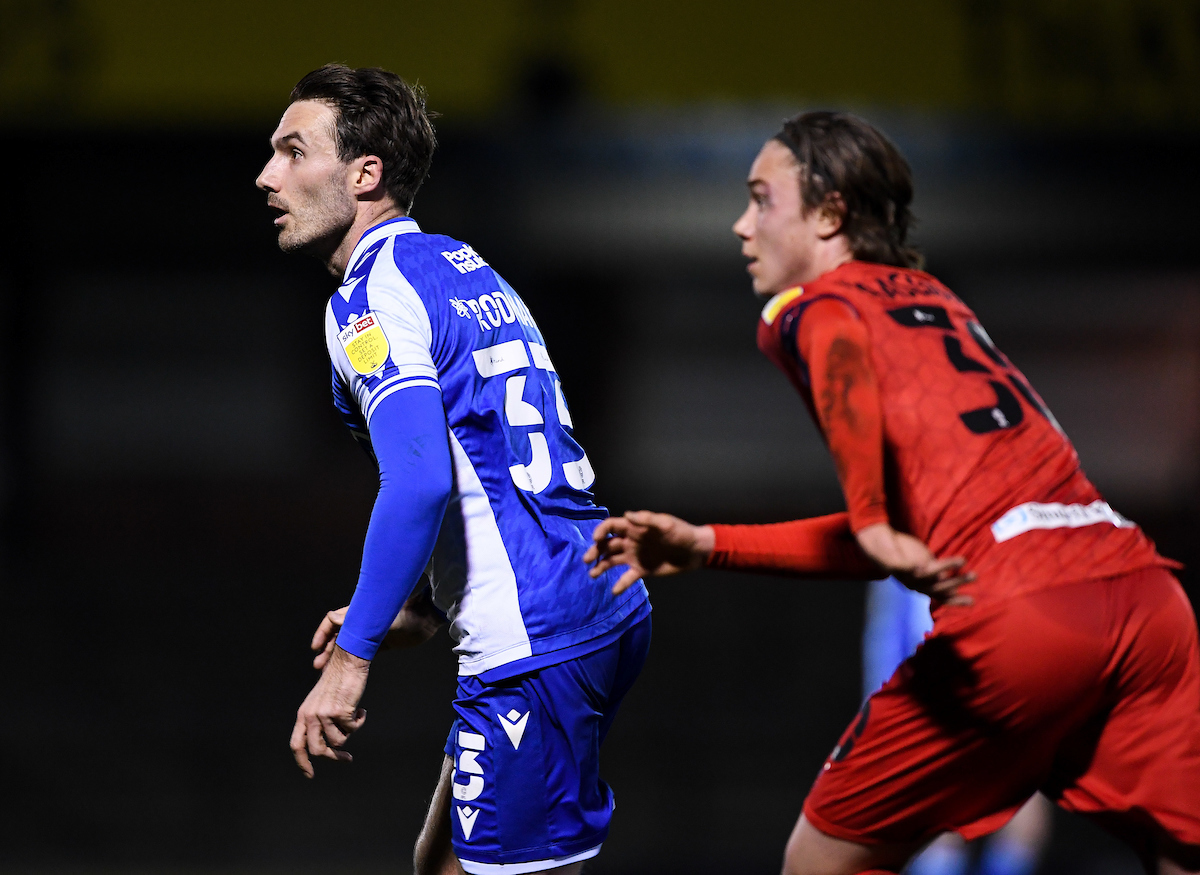 On the 25th minute, Scott Wootton picked up the first booking of the game, for a rash tackle on Brandon Hanlan.

10 minutes on an inviting ball in Hanlan's direction almost sparked the Gas' opening. McCormick switched the ball to Luke Leahy out wide who drove a low cross into the area towards the run of Hanlan. A superb ball between the lines, it narrowly evaded Hanlan and rolled out for a goal-kick. 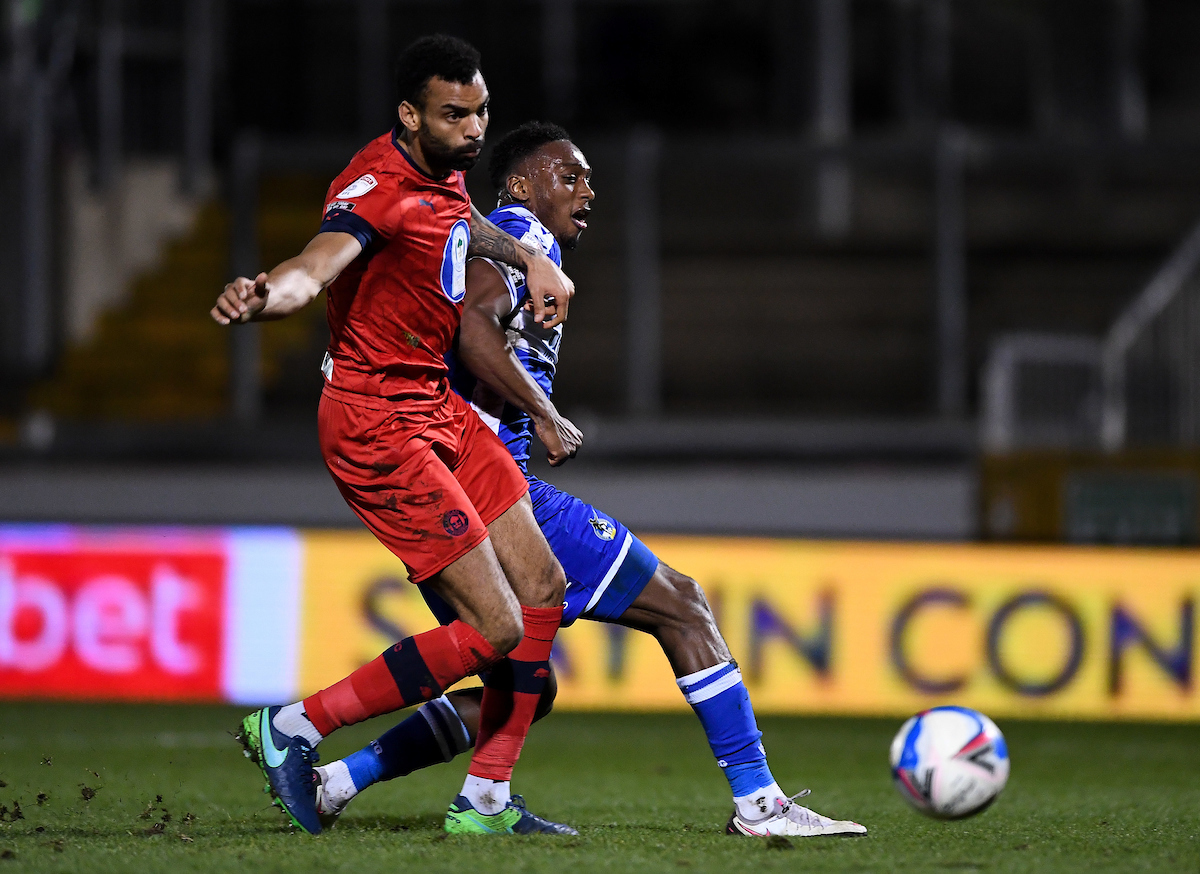 McCormick, responsible for unlocking the last chance, would take aim next for the Gas after progressing neatly through the centre of the park. He would strike from 20+ yards out with a lovely dipping effort that sent Jones scrambling before it passed narrowly over the crossbar.

A vital Alex Rodman tackle would avert certain danger as Luke Robinson looked to be in from the angle on the left flank. He surged into the box but saw Rodman come sliding in at a critical point to block it wide.

The Gas' energy levels looked to have faded somewhat as the half edged towards its conclusion, with Rovers surviving pressure from Wigan in the one minute of added time to see the half out at 0-0. 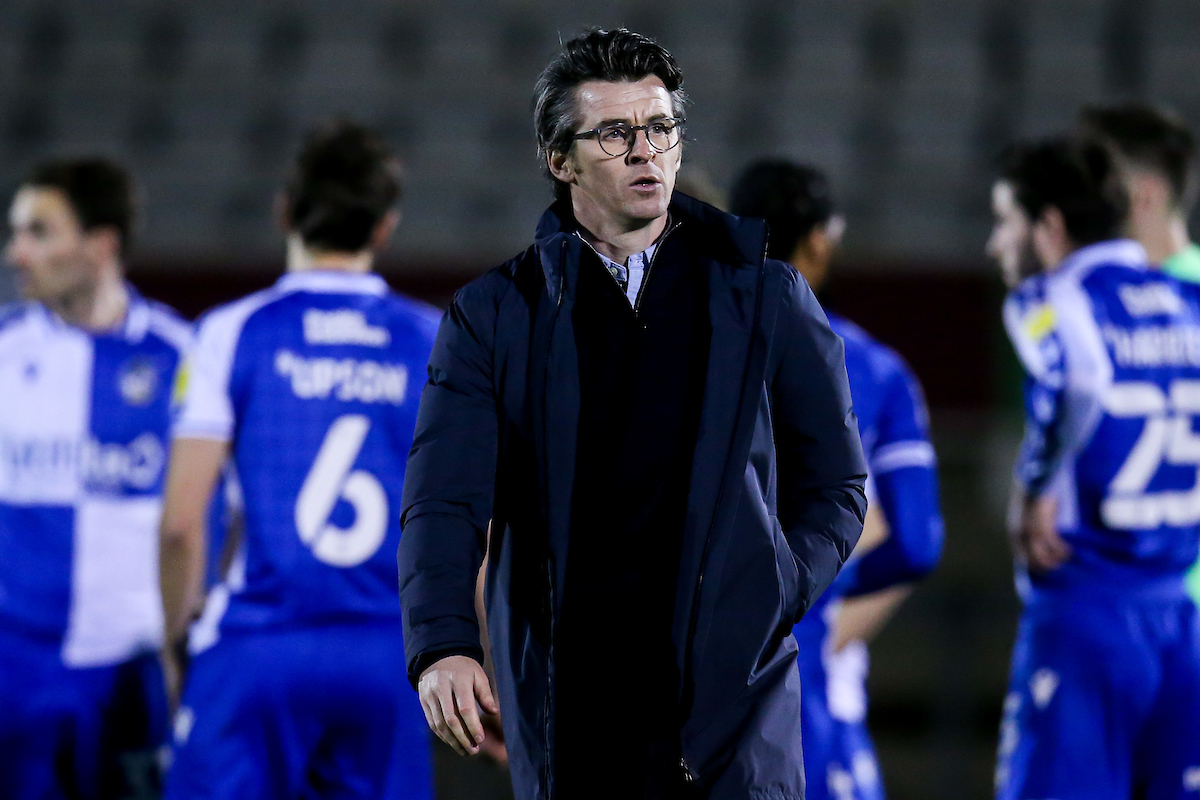 On the restart, Wigan found their first real opening of quality, with a crossed ball in bouncing over to Callum Lang at the back stick who redirected into the far corner past Joe Day.

The 68th minute produced a chance for the Gas, as George Williams whipped in an inviting delivery which narrowly evaded Hanlan at the back post.

Moments later, Rovers were level. A liquid move unleashed Luke McCormick as Brandon Hanlan neatly backheeled it to his teammate. McCormick took it in his stride superbly, before checking back on his right and drilling a strike into the bottom right corner from inside the box. 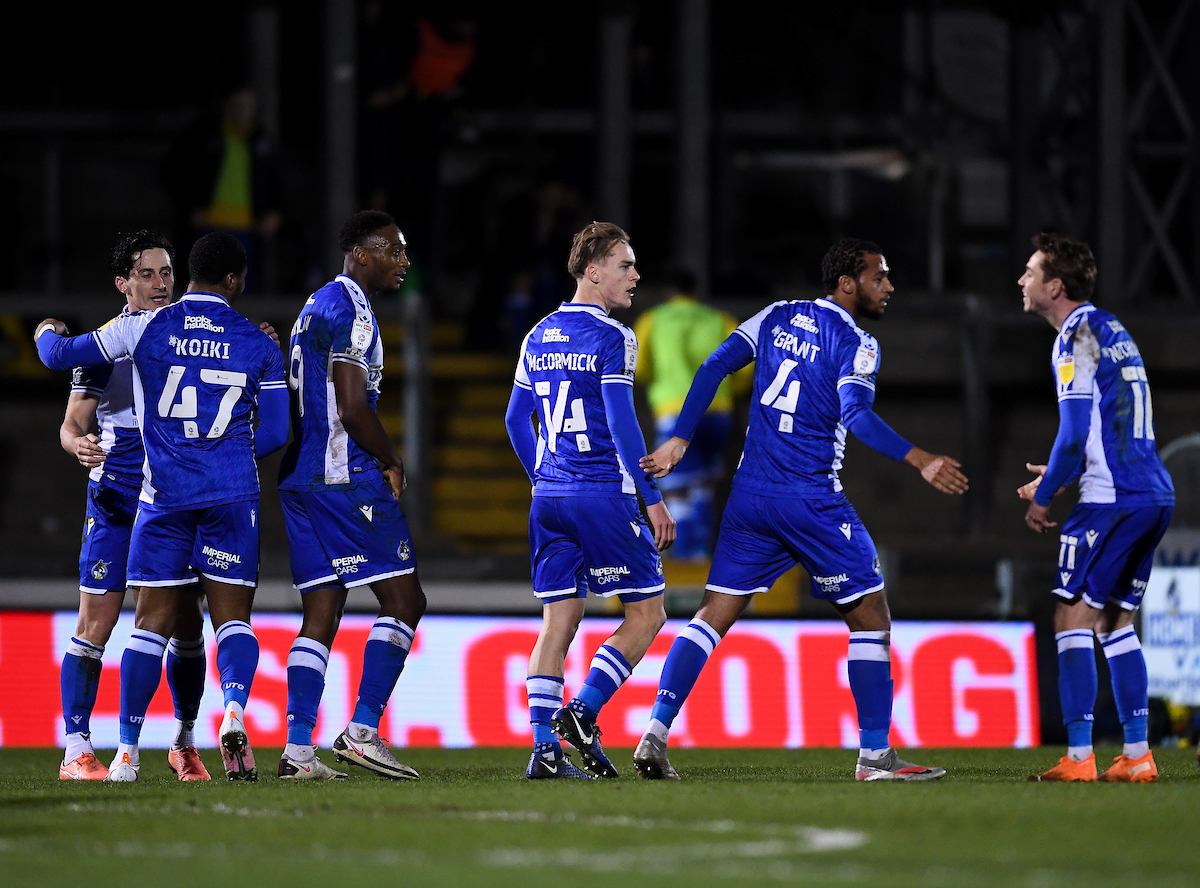 Searching for a winner, Rovers piled on the pressure, leaving the visitors largely camped in their own third.

George Williams would bring down a Zain Westbrooke pass before swinging his right foot at the ball while on the turn, it looked goalbound, passing between the legs of the first man, but a recovering Wigan defender stood firm to hoof clear.

With just over 5 minutes remaining Luke McCormick would dink a smart cross into the area for the run of Sam Nicholson. The Scotsman attempted to flick it in at the near post but found the side netting.

Jonah Ayunga would force a save in added time after sharply cutting off the byline before striking at the near post, but Jones was alert to the effort, stopping well.

In the end, a late Scott Wootton prodded effort cut the Gas' hopes of a late comeback short, knocking in a free-kick delivery.


Our Sky Bet League One fixture at the Mem against Wigan Athletic on 23rd February will now KO at 7pm. 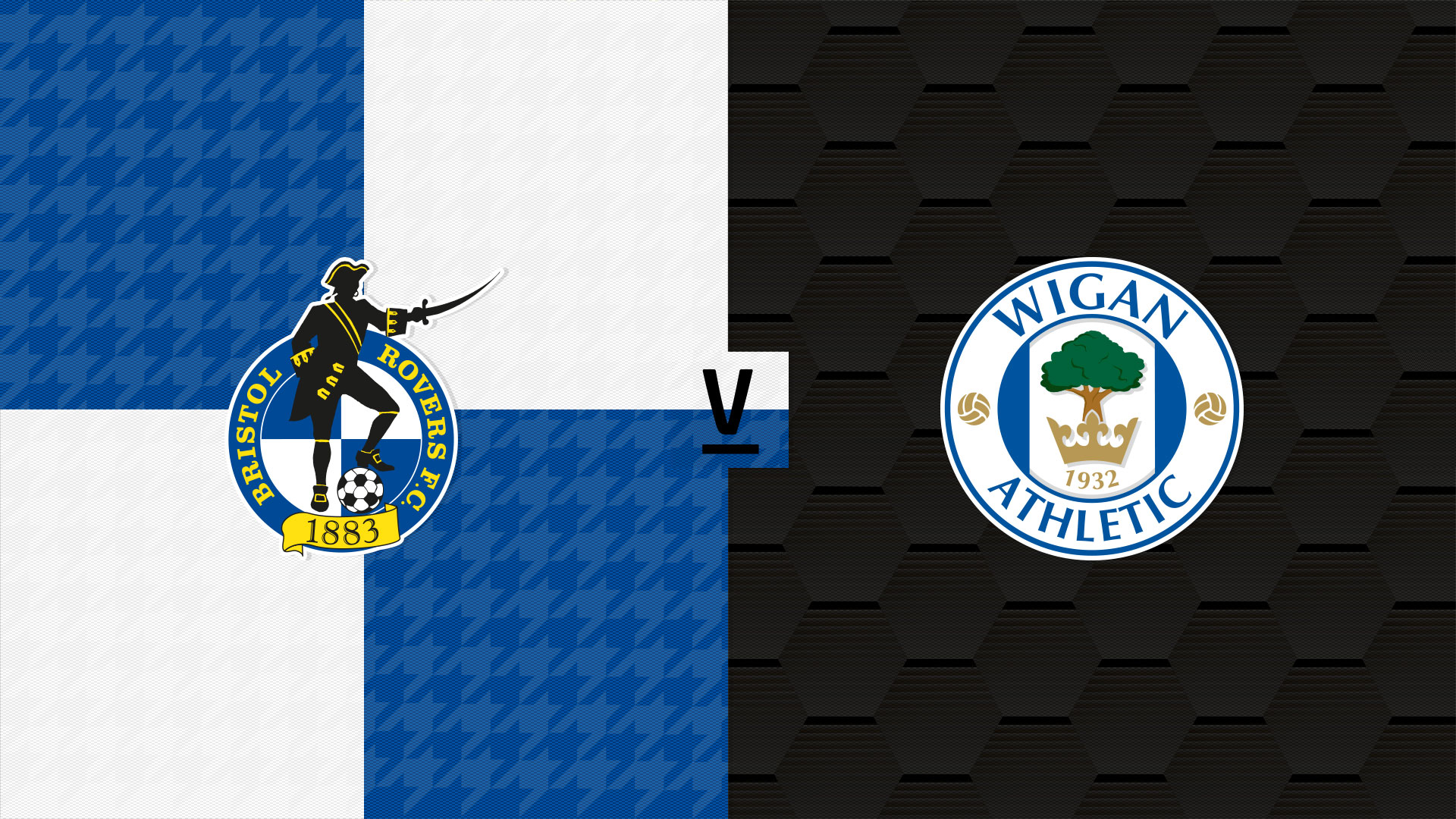 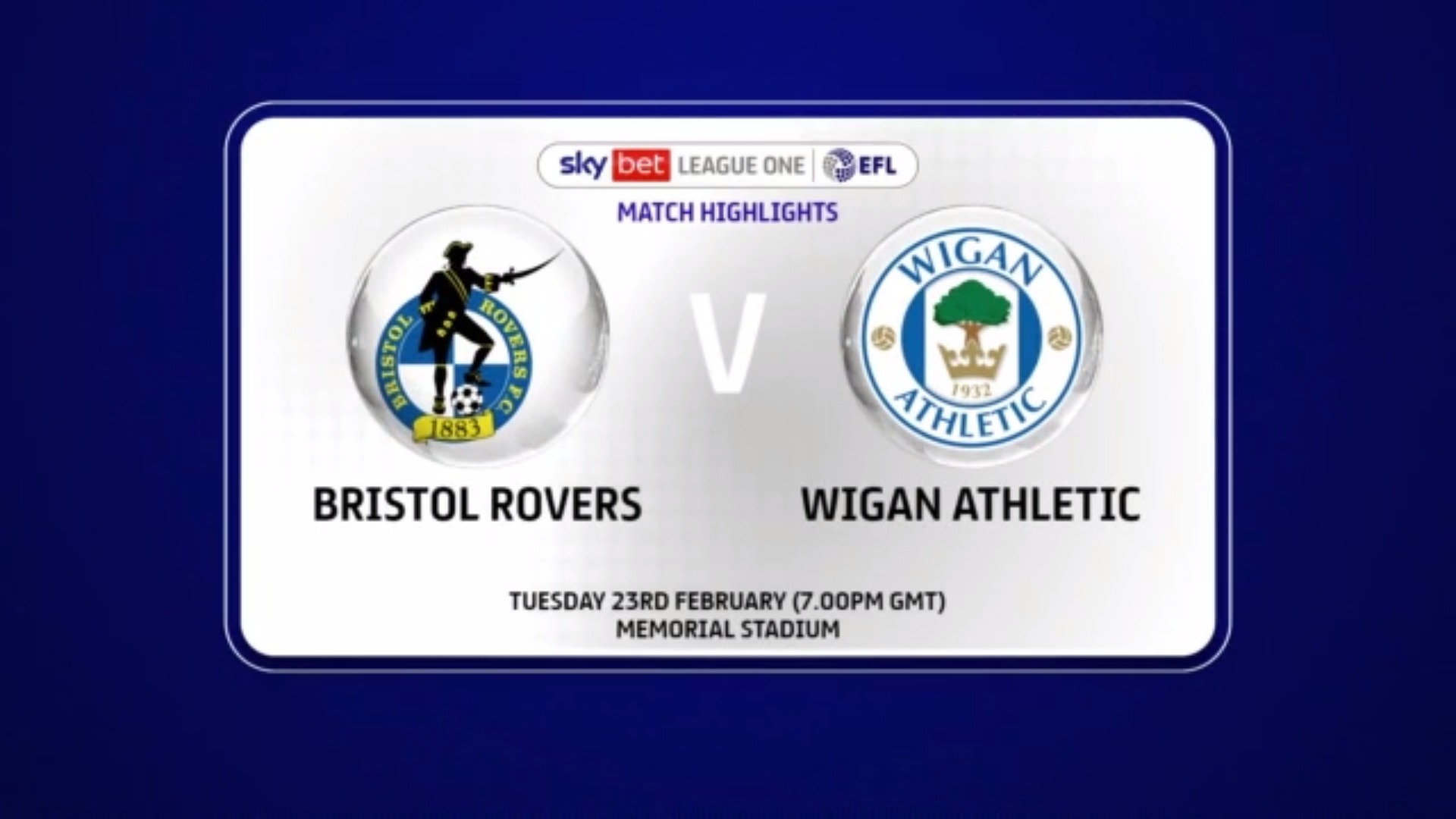 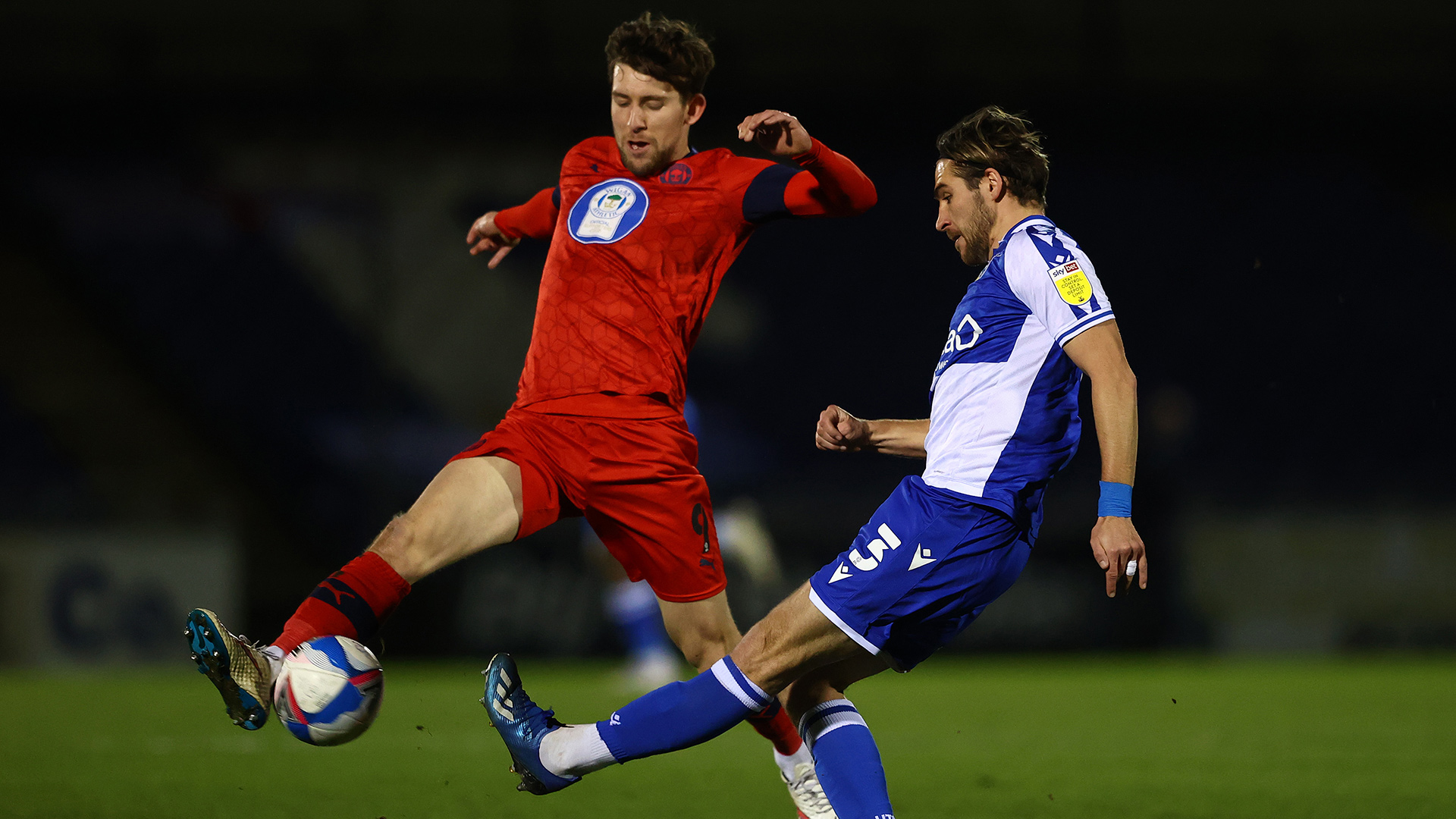