The Gas take to the road again this week, with a trip to Accrington Stanley on the horizon...

A disappointing afternoon at the Mem on Saturday prompts the need for a reaction from the Gas as they head away from home again to take on an Accrington Stanley side showing impressive 2020/21 form.

Rovers' opposition currently sit 9th, in touching distance of the play-offs with games in hand - but their form has been a mixed bag as of late.

Following defeat on Saturday, Paul Tisdale offered an honest assessment of how he would move forward with his squad, saying "We've got a long way ahead of us but we can't think like that, it's got to be about the next game, every three points is highly important and Tuesday is another very important three points.

"I need to see a reponse from the players in terms of the standard of play, and the discipline side of our game has got to be better." 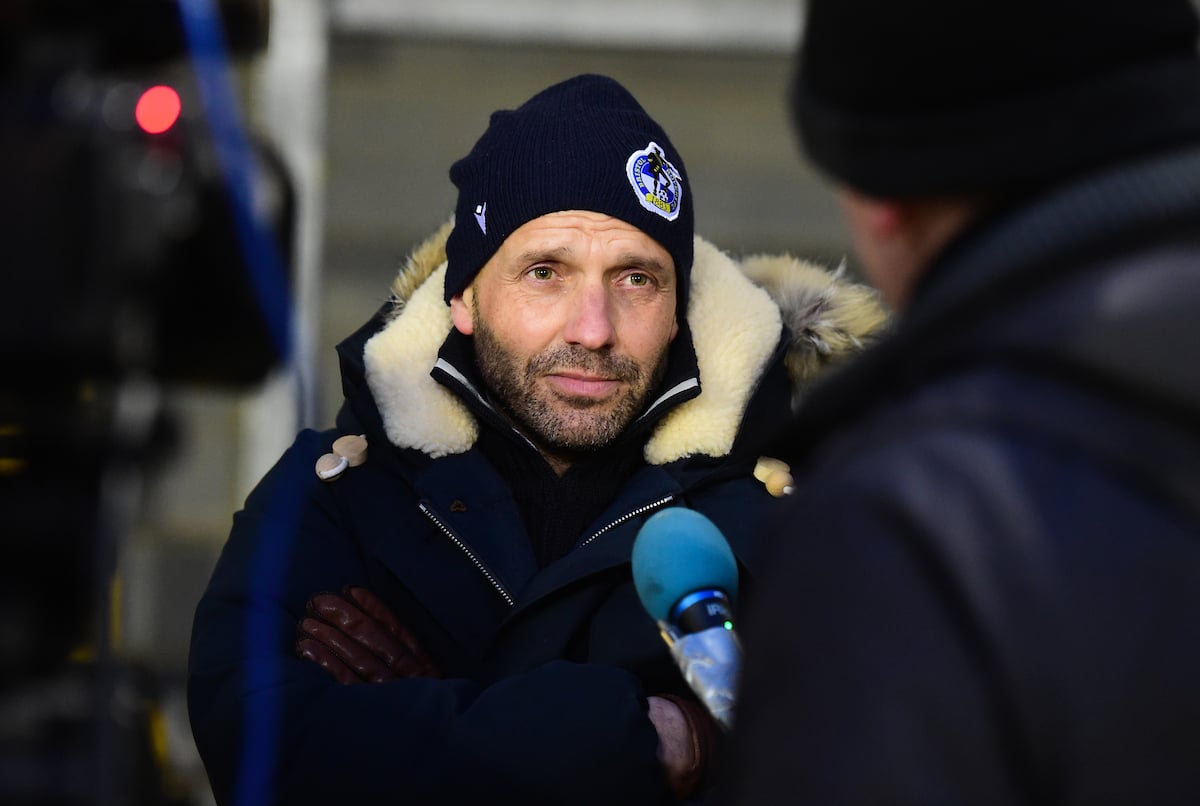 Speaking to accringtonstanley.co.uk today, Accrington Stanley manager John Coleman indicated he had no illusions about the challenge posed on Tuesday, despite the disparity in points between the two sides, "Every team we go up against worry me because I know they're capable of beating us - I believe we're capable of being anybody, but certainly in League One you can lose to anyone.

"I've seen enough this season to know that you can't take any game for granted, every game you play poses its own threat." 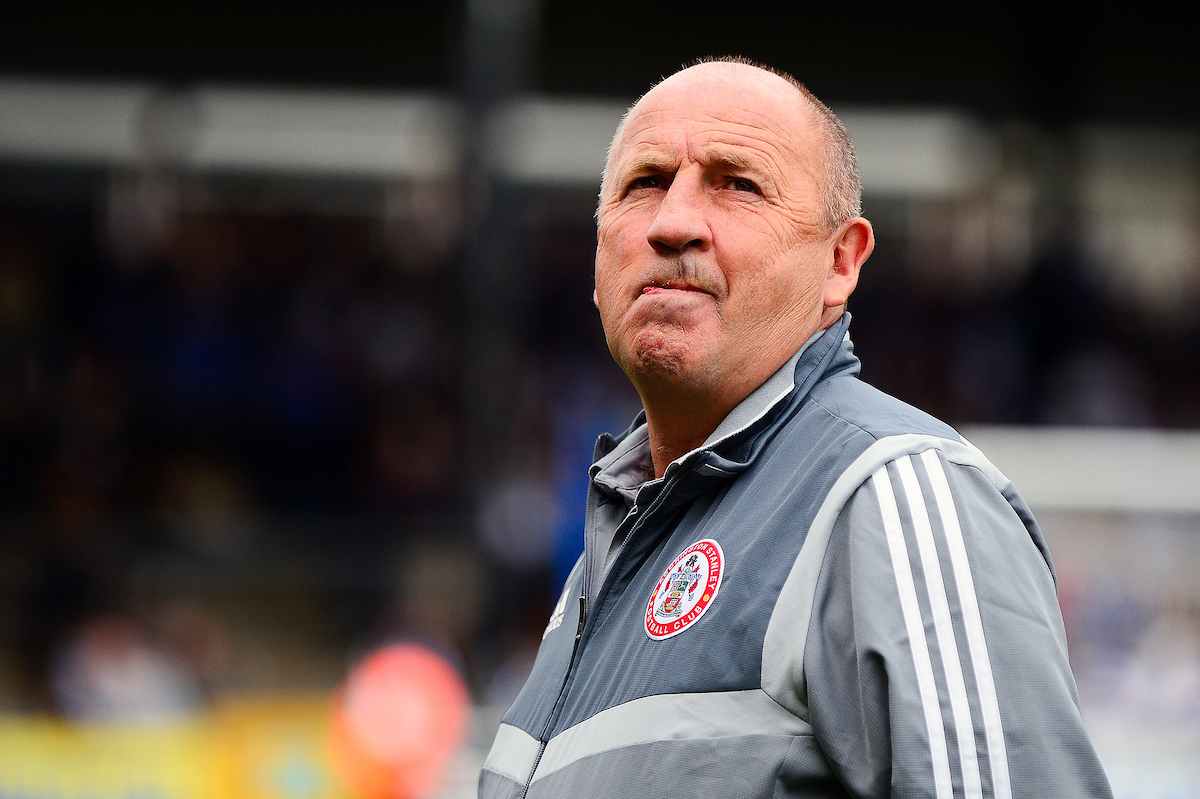 Nothing highlights Accrington's recent topsy-turvy form more than their back-to-back fixtures against Hull City, initially visiting the Tigers and going down 3-0, before hosting them a week later to go on and win 2-0. These results are sandwhiched between underwhelming results against mid-table sides, with a 1-0 loss to Gillingham and a 2-2 draw against Plymouth Argyle.

John Coleman's side started January very well though, with an impressive 2-0 win over Charlton Athletic.

Coleman builds his side on a foundation of defensive solidity, and has secured a number of narrow wins with clean sheets this season. Up the other end, Northern Irishman Dion Charles has bagged 8 this season from midfield. 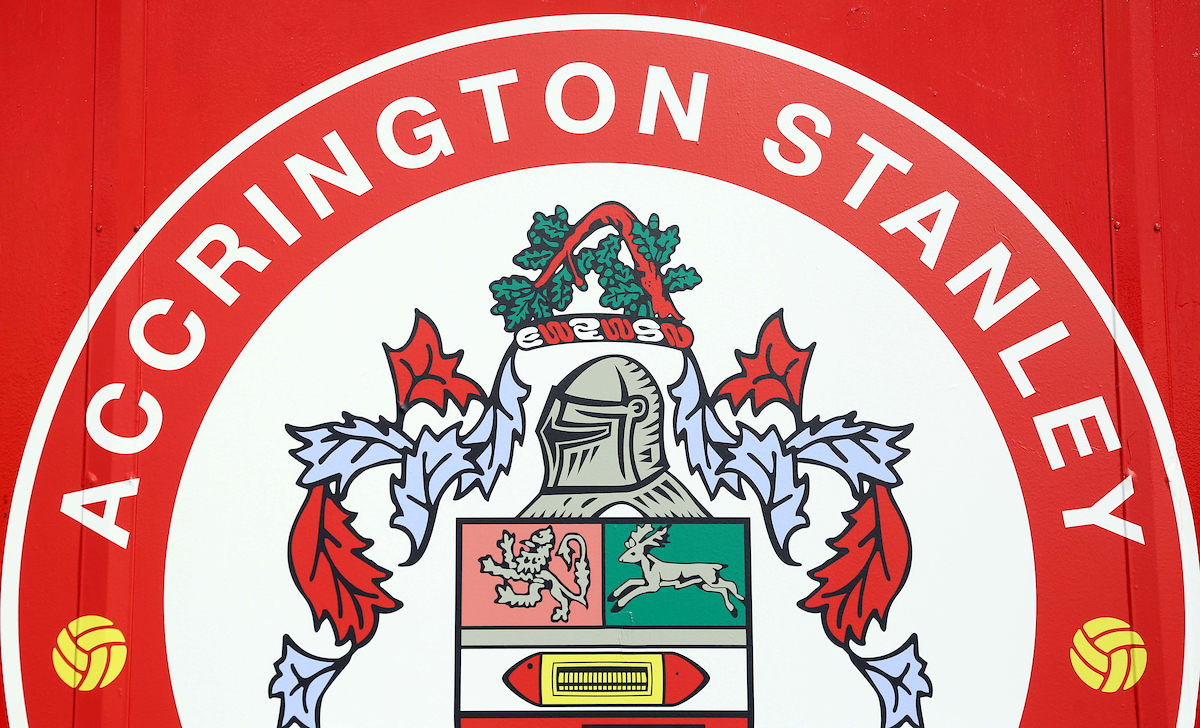 Rovers are yet to face off against Accrington Stanley this campaign, and you'll need to go back all the way to September 2019 to find the last meeting between the two sides.

It came at the Mem, with an entertaining 3-3 draw played out infront of the Gasheads, as Rovers initially took the lead through Rodman before Accrington surged infront with two goals. It then took a double from Jonson Clarke-Harris, including a spectacular bicycle-kick, to secure Rovers a point.

Can the Gas bounce back from Saturday's defeat? Find out LIVE on Tuesday with a £10 iFollow match pass!

The Gas' game on Tuesday evening is a re-organised fixture after Rovers' initial trip up north was postponed due to COVID-19. It joins a host of other fixtures re-scheduled for this week from past postponements, including Swindon Town against Wigan Athletic. Shrewsbury Town also host Crewe Alexandra, while Northampton Town travel up north to take on Blackpool.

Rovers beaten by Accrington at the Wham Stadium.

Four goals in the opening twenty minutes saw the hosts race to a 3-1 lead.

Joe Pritchard opened the scoring with a close-range finish, converting from yards out after being found by Bishop’s cross from the left.

Sam Nicholson drew Rovers back level minutes later, with the winger powering home an effort past Baxter, after capitalising on a defensive mistake.

Less than a minute after Nicholson’s goal, the home side were back in front, as Dion Charles grabbed his first goal of the game with a low strike from inside the area.

Charles added a second goal and Accrington’s third in the 16th minute, latching onto a long ball forward by Baxter and guiding a finish beyond Joe Day.

The home side stretched their lead to three goals when Bishop headed home from a corner, but Rovers had sizeable chances to reduce Accrington’s lead as Zain Westbrooke called Baxter into action with two plausible first-half chances.

In the second half, Bishop added a fifth goal for Accrington minutes after half-time, profiting from a rebound from Charles’ low effort.

Charles completed his hat-trick inside the final twenty minutes, glancing home a finish at the near post from Smyth’s cross, with Accrington scoring six to record the three points.

The encounter at the Wham Stadium was Rovers’ third midweek away trip on the spin, following recent Tuesday night trips to both Crewe and Peterborough.

There was an anxious wait before kick-off, as the ground staff frantically tried to clear the snow from the surface. An evening pitch inspection delayed the KO until 7:30pm – allowing extra time for the surface water to drain away to make the pitch safe and playable.

Rovers made a duo of changes for the game, with Josh Grant and Luke McCormick coming back into the starting XI, at the expense of Ogogo and Harries.

On the bench, there was a welcome return to the squad for James Daly, his first involvement in a match day squad since November.

Gas boss Paul Tisdale had faced a team managed by John Coleman 13 times ahead of Tuesday’s encounter, with both Managers recording 6 wins and 1 draw in their previous meetings.

With snow and ice strewn on the pitch, it was the home side that registered the first opening. A set-piece was pumped into the Rovers area, with the ball dropping to the feet of Pritchard, who blasted an attempt high and wide of goal after working an opening of space inside the Rovers area.

The wing-back didn’t have to wait long for his next opportunity, as the home side mustered a break down the left-hand side. Colby Bishop broke to deep and angled a delivery back across goal that allowed Pritchard the simplest of finishes from close-range.

Rovers weren’t behind for long, as three minutes later Sam Nicholson bought the goals back level. The playmaker seized on a loose touch from defender Mark Hughes, who struggled to control a high ball and snatched possession to break towards goal. In a one-on-one with Baxter, the Rovers man opted for power, which proved to be the right choice, as his effort rifled into the bottom corner.

The home side retook the lead less than 60 seconds after Nicholson’s equaliser, as Dion Charles showed some neat footwork to open a shooting opportunity to power home a finish past Joe Day, to register a third goal in as many games for the forward. 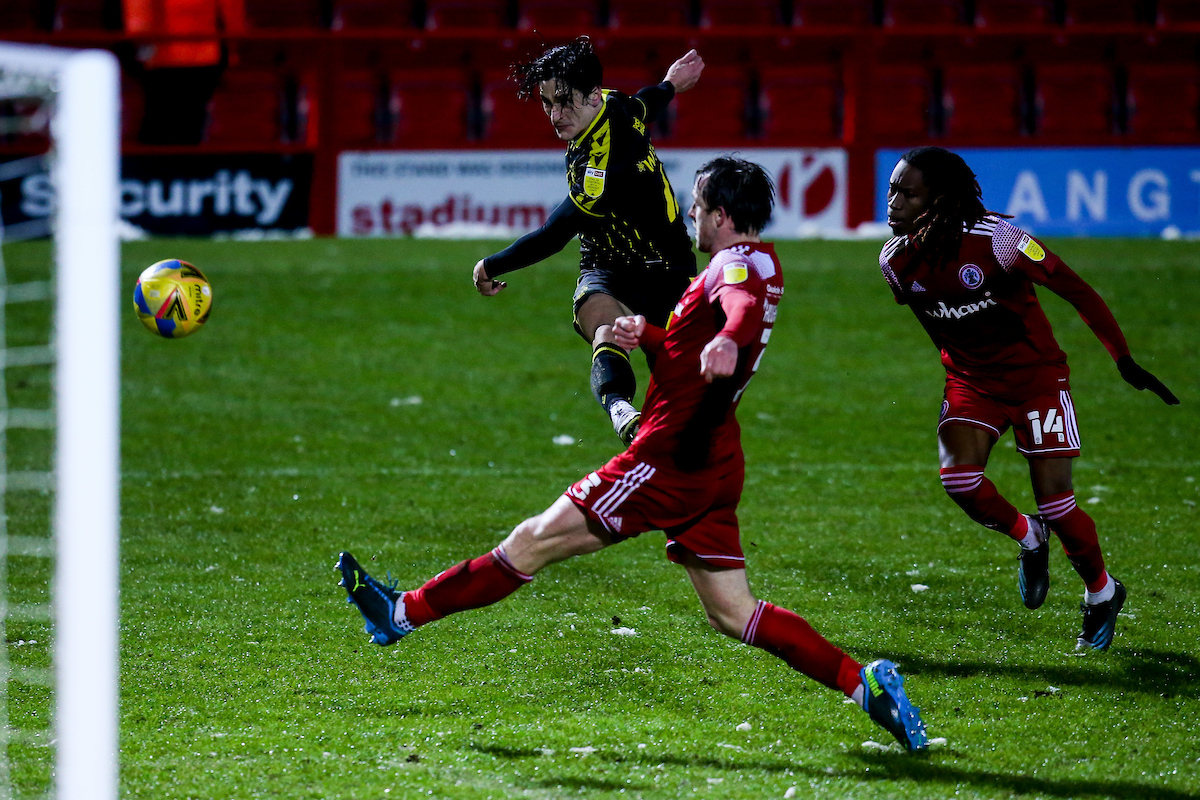 The fourth goal of the game looked crucial, with the game still not even 20 minutes old.

When it arrived, in the 16th minute, it went the way of the home side. Baxter’s kick out of his hands swirled in the conditions, as Charles gave chase and managed to get to the delivery in an awkward gap between the Rovers defence, with the striker lifting a finish beyond the onrushing Joe Day to give the hosts a two-goal lead.

The home side continued to create chances, as Colby Bishop drove a header into the ground from a corner that required an alert stop from Joe Day to tip the attempt over the crossbar.

A further McConville corner minutes later again picked out Bishop, who darted to the front post to plant a header that gave Day little chance at making a save, adding a fourth goal for Accrington on the stroke of thirty minutes.

Rovers needed a response and almost found one when Westbrooke took aim from 25-yards out. The left-footed attempt from the midfielder looked destined for the top corner, but a fingertip save from Baxter tipped the ball over the crossbar.

With the first-half drawing to a close, Westbrooke again came close to denting Accrington’s advantage. A crossfield ball picked out the run of the midfielder on the edge of the area, as Westbrooke looked to lob Baxter with a volley. The finish looped over the goalkeeper's head, but Baxter managed to backtrack to get a faint touch to divert the effort wide. 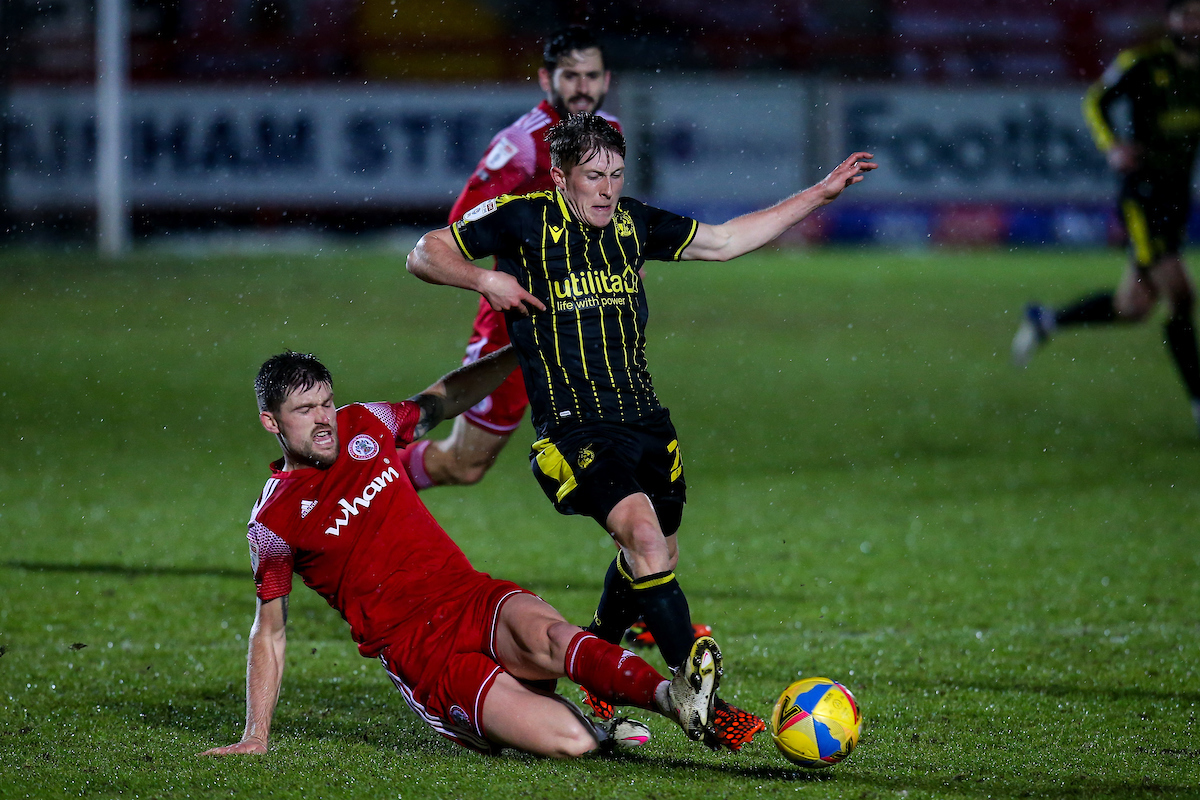 A contentious moment to end the half, as a lunge from McConville on McCormick incensed the Rovers players, with the Accrington skipper escaping with just a yellow card for the challenge on the halfway line.

During the interval, both sides opted to make a double change – with Daly and Ayunga introduced for the Gas, with Hanlan and Oztumer making way.

Accrington added a fifth goal just minutes after the interlude. A quick series of passes for the hosts led to Charles firing a low effort towards the target that skidded across the surface. Day got down to get a hand to Charles’ attempt, but could only divert the rebound into the path of Bishop, who made no mistake from yards out double his tally for the evening.

Both Charles and Bishop had chances to complete their hat-trick. Bishop came close with a volley from outside the area that Day pushed over the crossbar, with Charles unable to lob Day when played in one-on-one with the loanee goalkeeper.

Rovers completed their allocation of five changes on the hour mark, as Tutonda, Hargreaves and Harries were all introduced.

With twenty minutes remaining, Charles did complete his hat-trick, converting at the near post from substitutes Smyth’s cross.

There were no late chances for Rovers to chip away at the host’s lead, as the game ended 6-1 in favour of the home side. 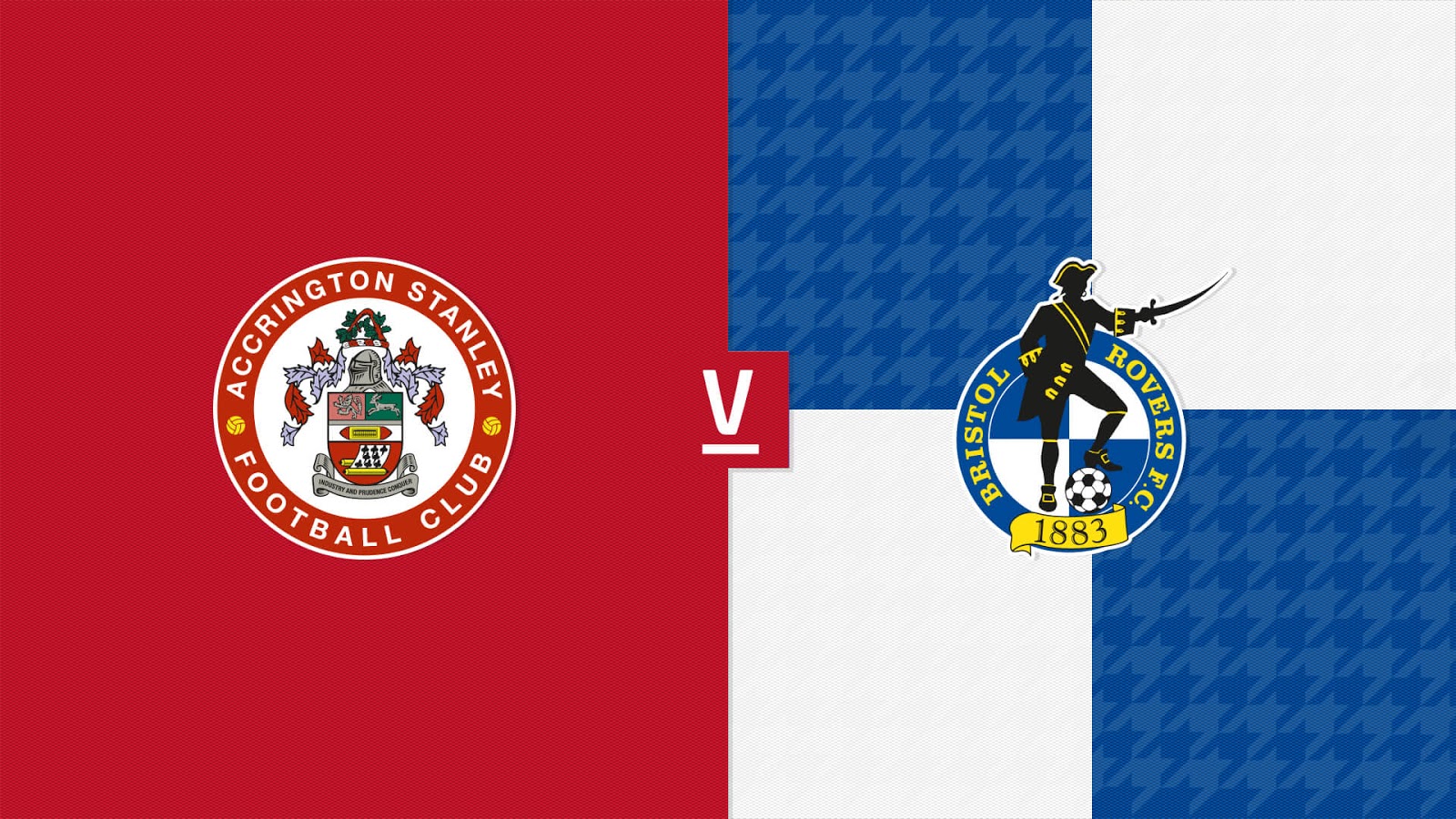 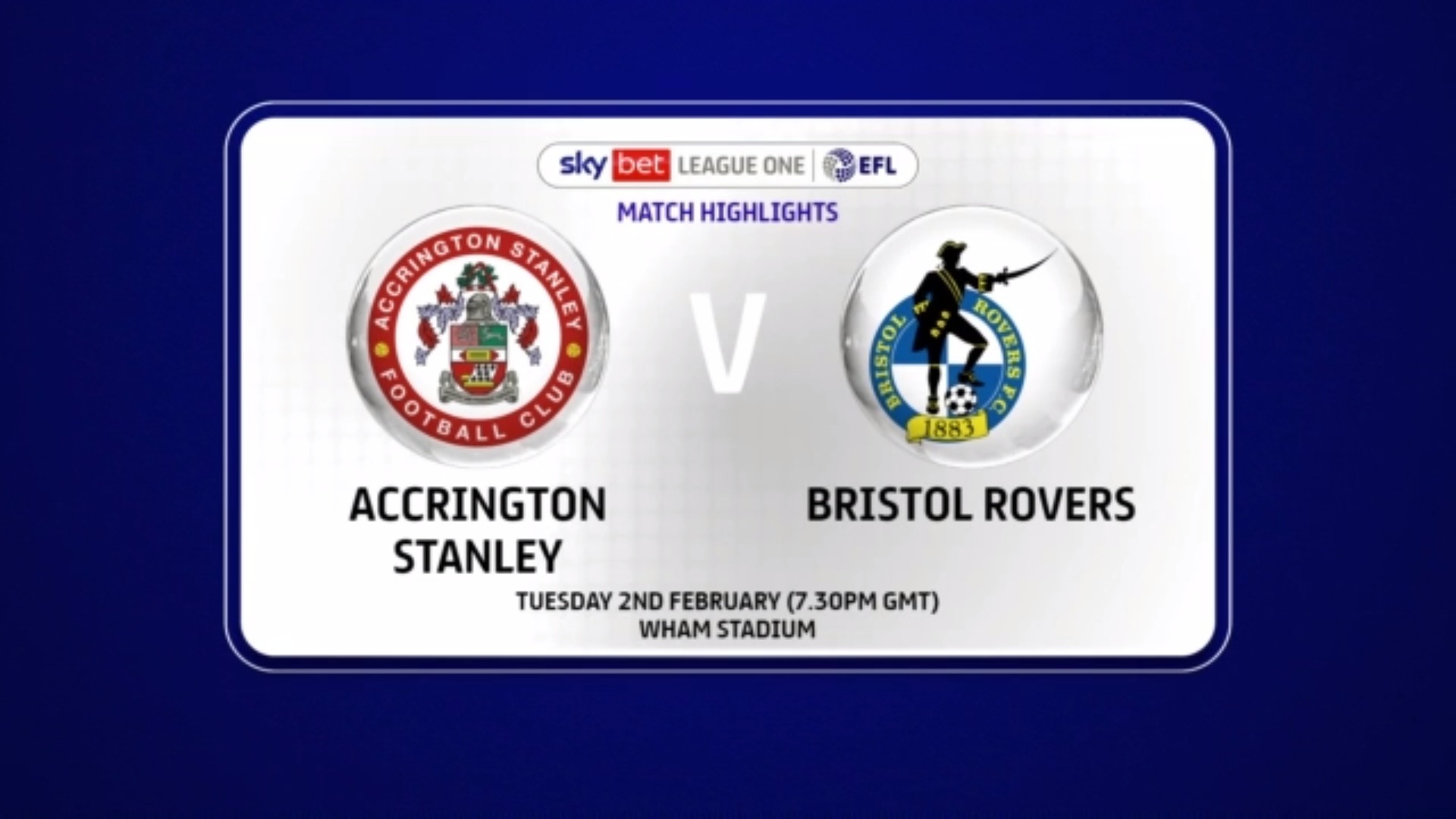 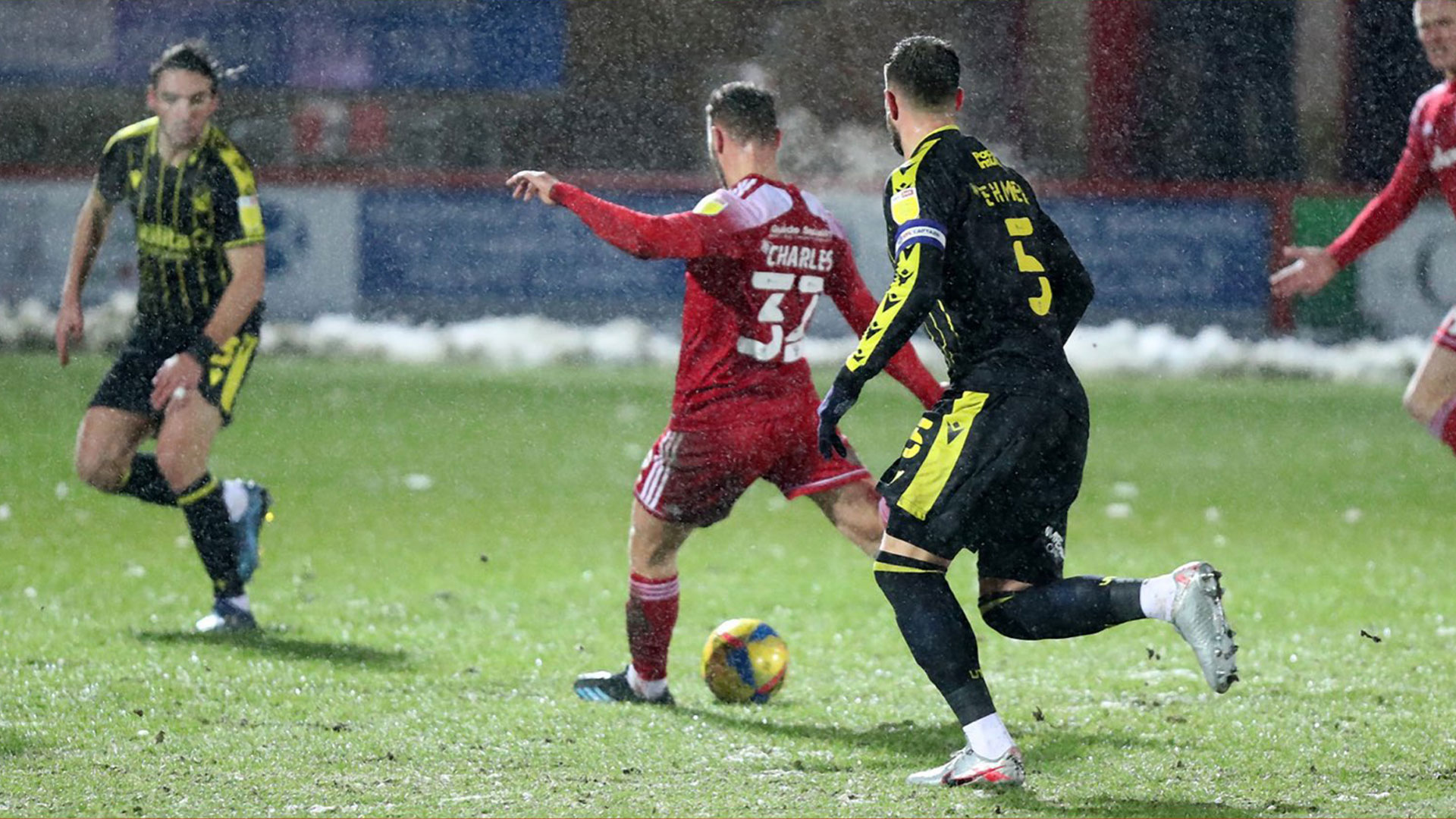