Jay Fulton, Borja Baston and Joel Asoro’s goals for Swansea confirmed superiority against Rovers, but Graham Coughlan’s men did not let the South Walians dominate their jaunt over the Severn as much as the scoreline might suggest.

Fulton’s glorious curler, Baston’s poachers strike and Asoro’s late tap-in gave the Swans their 3-0 win, which they were good value for, but Coughlan will be buoyed by plenty of positives in a disciplined, hard-working Rovers display, with two-thirds of the goals conceded coming after substitutions had broken up the game and some legs drew a little weary of a game spent often chasing the ball.

Rovers lined up with a diamond formation, with Ed Upson marshalling in front of the back four and Lucas Tomlinson at the point behind the front pair. This left Abu Ogogo and Liam Sercombe to do the legwork in between. In defence, Young Alfie Kilgour, at centre-back, would be given a test by highly-rated Swansea forward Oli McBurnie. Kilgour was partnered by Tony Craig, captaining the side in Ollie Clarke’s absence.

At full-backs, Michael Kelly and Josh Hare would be charged with providing some width, while Tom Nichols and Gavin Reilly led the line.

Swansea’s side was a full-strength one, with McBurnie, subject of alleged transfer interest from Sheffield United, flanked by experienced wide forwards Nathan Dyer and Wayne Routledge.

The visitors began well, and before their fans had sung their first hymn or aria, had forced a corner, and kept up an early pace by getting a ball to McBurnie in the box, with his shot being stopped low by Jordi Van Stappershoef.

Early Swansea forays were common, but largely unthreatening, as Rovers’ disciplined shape and anticipation, dealt with everything – until the ball fell to Jay Fulton 25 yards out. His effort was the kind of relaxed curler you tend to try in pressure-free pre-season games. It was a sumptuous effort, floating into the top corner, and such is the absence of malice before the season truly gets underway, a fair smattering of the Gas faithful applauded the strike.

As well as this being a test for Kilgour, Tomlinson was getting more pre-season minutes to build on his experiences so far, and the young attacking midfielder showed willingness and no little quality as he tried to get into the game. As Swansea looked to build once more from the back, Tomlinson picked a pocket, won the ball back and was tripped, earning Rovers a free-kick in a good position. From the dead-ball Sercombe struck well, and goalwards, only for Erwin Mulder to tip the shot over.

At the other end, Swans quickly worked the ball to Bersant Celina, in space on the edge of the area, but his rushed shot floated tamely into the Thatchers End.

Just after the half-hour marked, from a high clearance by Kelly, Nichols took the ball down well, and ran at the Swansea defence. His through-ball, trying to find the diagonal run of Reilly, was so nearly telling. 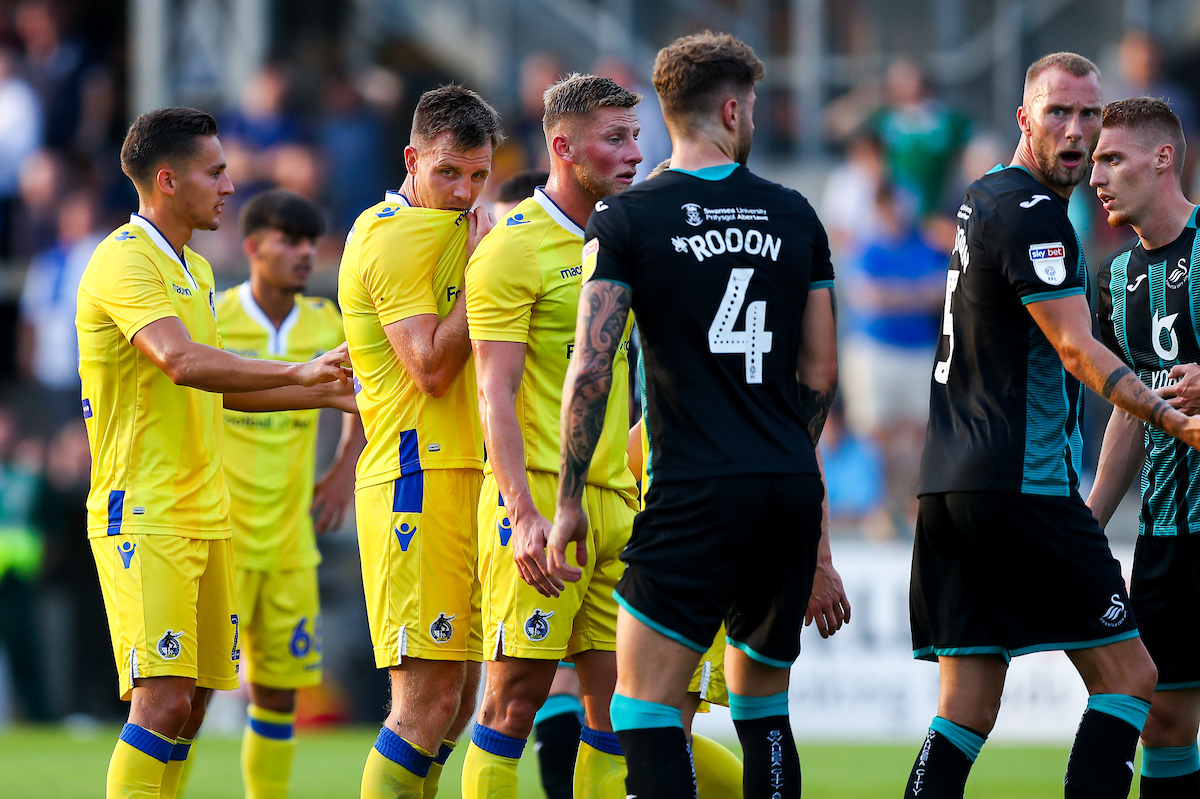 Nichols himself was on the end of an accurate Hare cross, heading not far over the bar in an aerial battle he seemingly had no right to win. Hare was less accurate with a cross-field ball that only served to put Nathan Dyer in, but the wideman shot low, straight at Van Stappershoef, who confidently came to claim the resultant corner.

There were no changes at the half-time interval, with both teams looking to continue to play on-the-deck, eye-catching football. Swansea achieved it first, after the break, with Celina shooting wide from an angle, then Dyer capitalising on a heavy Kelly touch, but seeing his shot blocked.

In between, Tomlinson continued to catch the eye with a sparkling bit of skill in an attacking position that again was answered with a foul as Swansea failed to win the ball back from the youngster fairly.

Swansea made four changes just after the hour mark, with perhaps the most interesting being the introduction of Barrie McKay – not for footballing reasons, but with the prospect for punsmiths of Swansea goals being scored by Fulton, McKay. If it were to occur, perhaps the best pair of goalscoring since former Pirate Peter Hartley and James Poole scored for Hartlepool. No, they really did.

Fulton did go off as McKay came on, so we could potentially claim that word compound, although in reality McKay replaced Routledge, if you really want to keep up with appearances.

Swansea sub Connor Roberts fired low across goal expecting to find McBurnie, and if the burly forward was taller by a couple of inches more than his six-foot-two frame he probably would have doubled the score.

Bennett showed his own brand of flair with a long, sideways run that retained the ball well, before he floated a clipped ball to Reilly. The Scotsman slipped it to strike partner Nichols, who curled not too far over.

McBurnie flashed one over from the edge of the area when free, but soon afterwards he turned provider, going on a Harry Kane-life storming run to the edge of the box, then scooping a pass to substitute Borja Baston, who fractionally beat Van Stappershoef to the ball to clinch the game.

Joel Asoro nudged in on the line in stoppage minutes to add insult to injury time, but Rovers will come on for the run-out, for sure.

To Plymouth, on Saturday - then the countdown is on.

The Gas will battle it out against Swansea at 7.45pm on Tuesday 23rd July.

Supporters can purchase tickets online by clicking HERE - with the 'Print @ Home' option being the easiest option when purchasing tickets online.

Tickets can be purchased in person at the Mem from our Superstore - which is open 9am-5pm, Monday-Friday.