We preview the next round of the FA Cup, seeing the Gas take on fellow League One outfit, Coventry City...

The Gas host their first home tie of 2020 with an FA Cup 3rd Round fixture against Coventry City.

A sticky patch of late has left the Gas without a win since their dramatic day out in Ipswich in mid-December, but this is largely due to weary bodies in the Rovers squad, with a number of players having to dig in through this festive period due to a series of injuries.

Rovers now look to this weekend to progress in the FA Cup and bounce back from a 3-0 loss on New Year's Day. They face a Coventry City flying high in the league at the moment.

Manager's Preview: Garner spoke to the press on Saturday ahead of his side's 3rd Round tie the following day...

Player's Preview: Liam Sercombe also caught up with the media on Saturday, looking forward to playing Coventry as well as offering a reflection on the previous week.

Opposition: Mark Robins' side have been in fantastic form over the festive period, which can largely be credited to the scintillating form of Matt Godden, who has scored six goals in just two games - a 4-1 victory on New Year's Day over Tranmere, and a superb display against league leaders Wycombe Wanders on the 29th to win by the same scoreline. All this leaves the Sky Blues in 3rd place.

In terms of the FA Cup, Coventry, like Rovers, needed a replay in the 2nd Round to get through, as they drew 1-1 with Ipswich Town before dispatching them 2-1 at Portman Road in the replay. 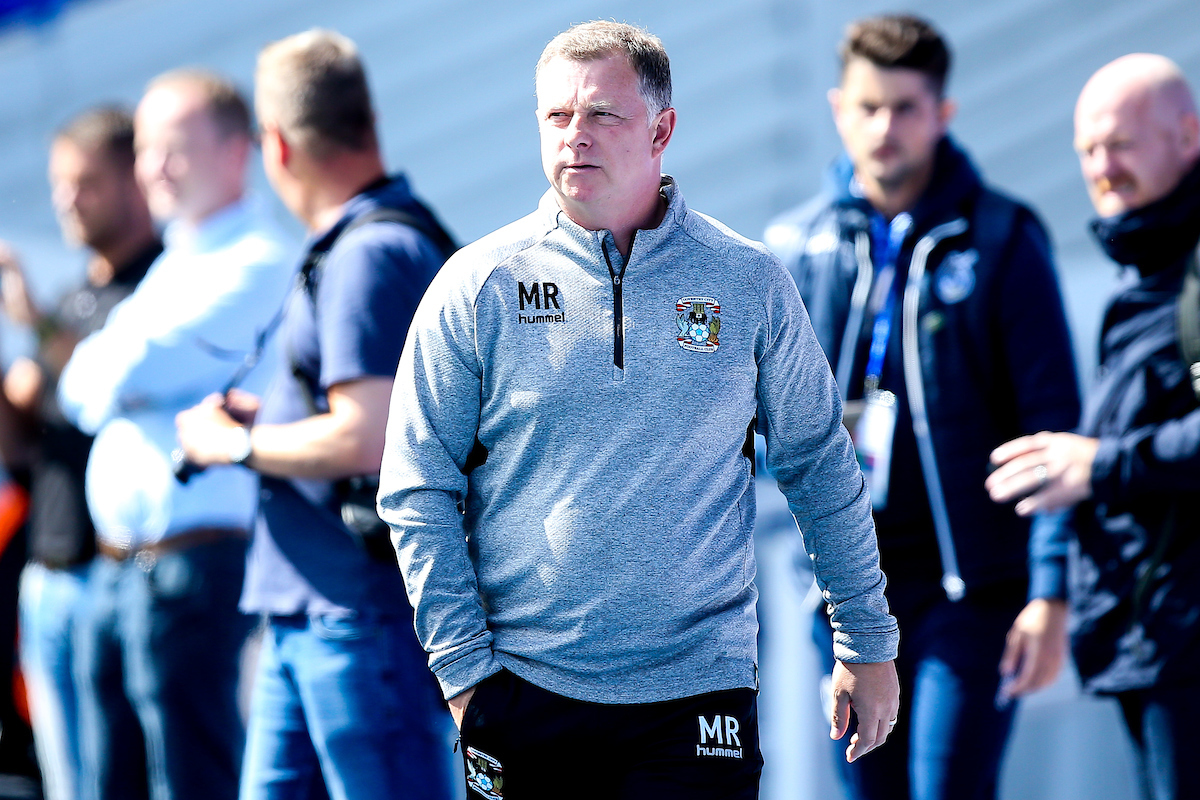 Tickets: Pay on the day will be available on Sunday. Click on the link below for the full details, including ticket prices.

Last Encounter: The two sides met early on in the season at St Andrew's, in a game that swung on the referee's decision to rule out what would have been Tom Davies' first goal for the Gas in the 2nd half which would've drawn things level. In the end, Rovers were put to bed with 10 minutes left, as Kastaneer made it 2-0. 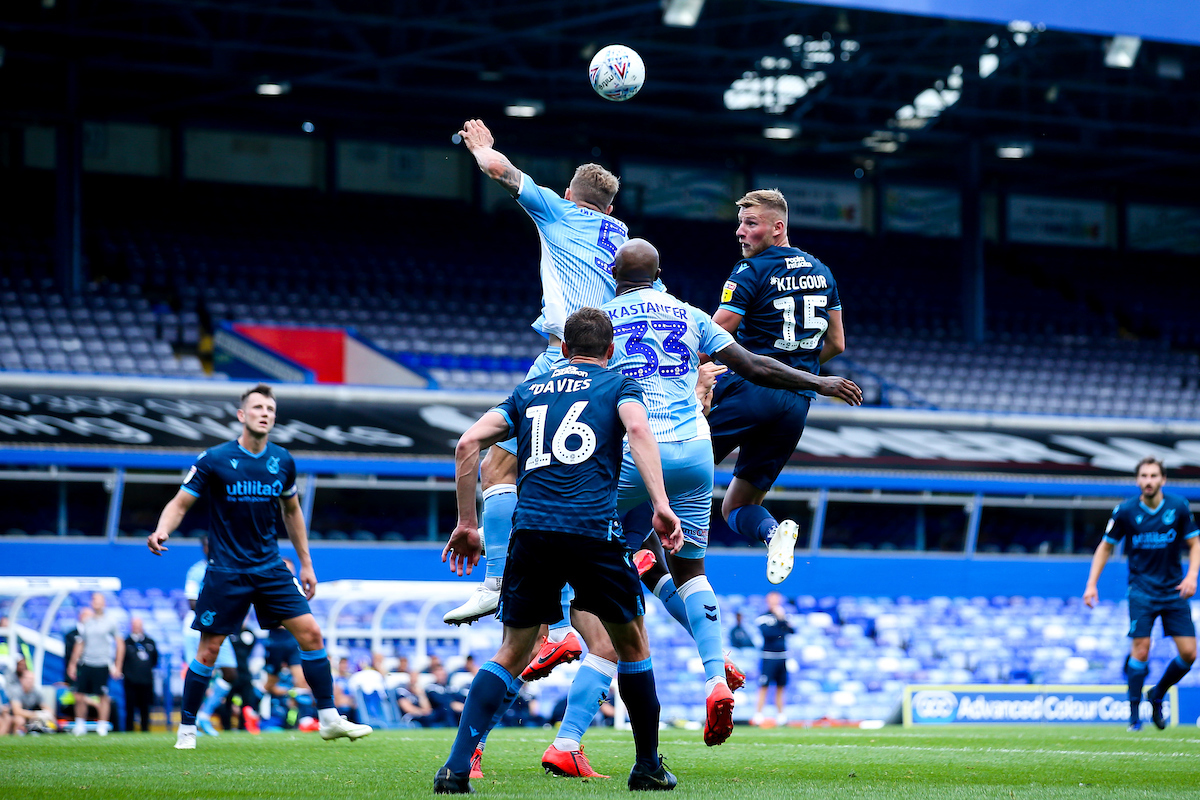 Betting: You can back Rovers to progress at 6/5 - with a 1-0 Rovers in priced at 10/1. To bet with Sky Bet please click HERE - please gamble responsibly.

How to Follow the Game: To find out about the available iFollow packages and to see which games are available in your location on the service please click HERE.

The Gas exit the Emirates FA Cup at the Third Round stage at St Andrew’s.

Biamou’s neat finish inside the opening five minutes game gave the home side an early advantage in the contest.

Rovers had chances of their own as the first-half played out, the clearest attempt coming midway through the opening 45 minutes, as Clarke-Harris clattered the crossbar with a powerful header.

In the second half, the Sky Blues grasped the all-important second goal through a powerful finish from Josh Pask, with Biamou grabbing a third goal from close-range just moments later to complete the scoring and to knock Rovers out of the competition. 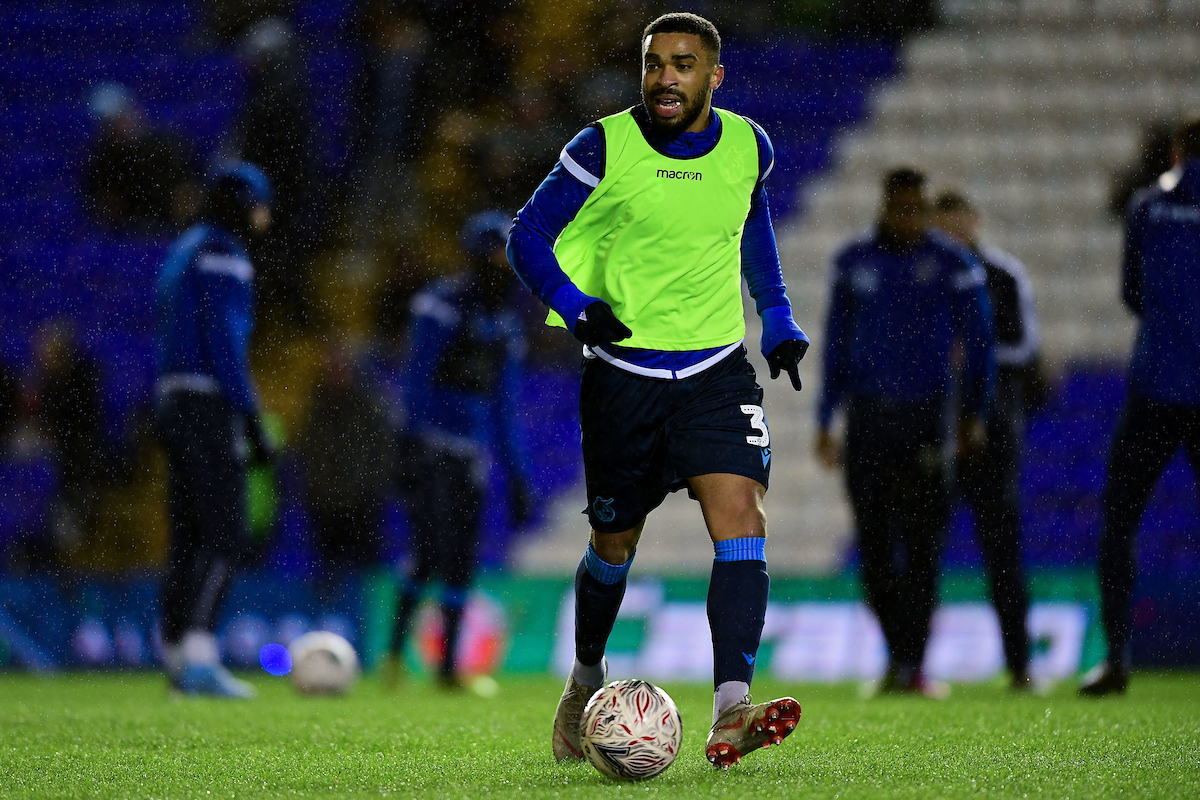 Ahead of the tie, Rovers made one change to the side that faced Doncaster on the weekend prior.

The change saw Josh Barrett, who was ineligible for the tie, drop out of the starting XI. The playmaker was replaced by Tareiq Holmes-Dennis, who was deployed in a role that saw him operate further up the pitch, in a more attacking capacity. 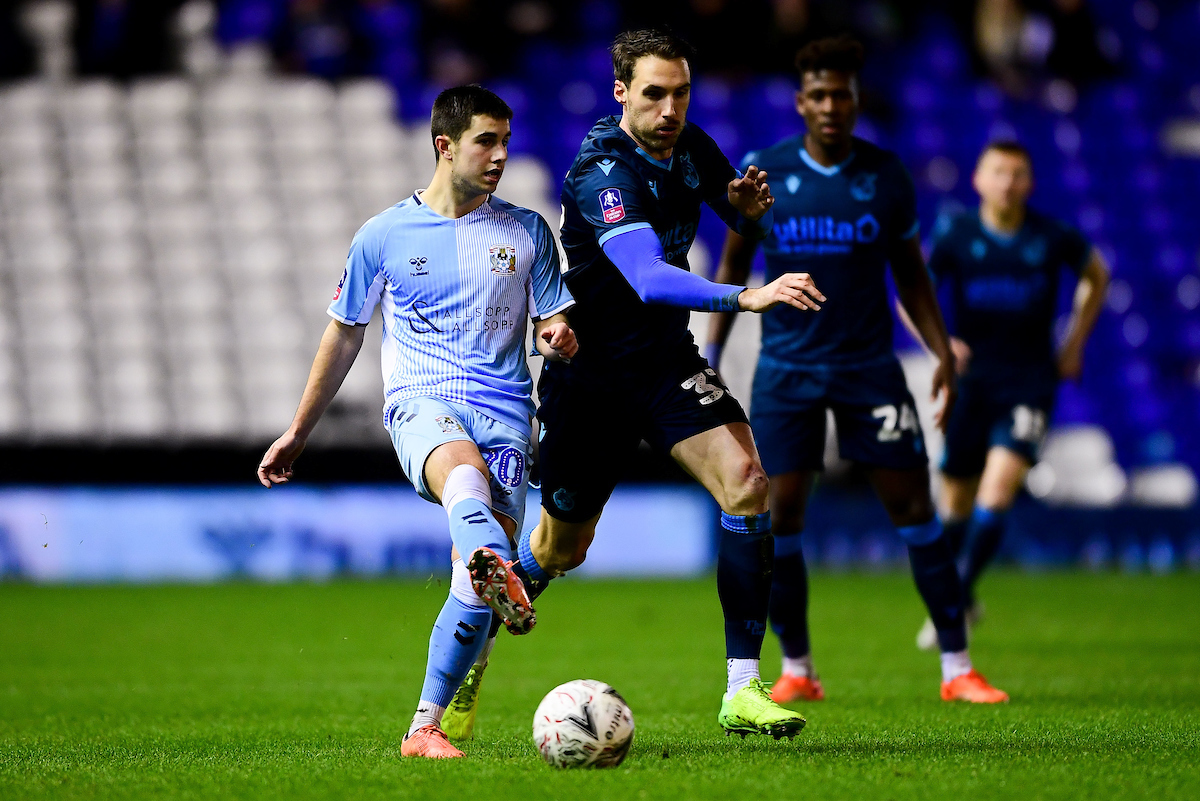 In the early stages, there were anxious moments for Rovers, as a low effort from Josh Pask forced a save from van Stappershoef. The Rovers ‘keeper was able to take the sting out of the effort and pounce on the loose ball at the second time of asking.

Rovers didn’t take warning from the early endeavours from the home side, as the host’s grabbed the game’s opening goal in the 4th minute.

It was O’Hare’s through ball that played Biamou through on goal and he made no mistake in placing a finish beyond van Stappershoef, slipping a side-footed finish inside the far corner.

Both sides tussled for possession as the first-half progressed, with Rovers aware of the focus on the home side to break forward at pace when the opportunity presented itself.

In terms of chances, Coventry came close to threatening the Rovers goal when Pask’s sweeping low cross narrowly missing Biamou at the back post, as the goal scorer slide in to touch the cross home.

Rovers responded well and fashioned two chances in quick succession, both coming via the combination of Luke Leahy and Jonson Clarke-Harris.

Leahy’s cross from wide out on the left flew high into the congested penalty area, with the striker managing to direct a header onto the crossbar.

An exact copy of the delivery moments later from Leahy again reached the striker, who this time was able to leap higher off the ground to meet the cross, but directed a powerful header high over the target. 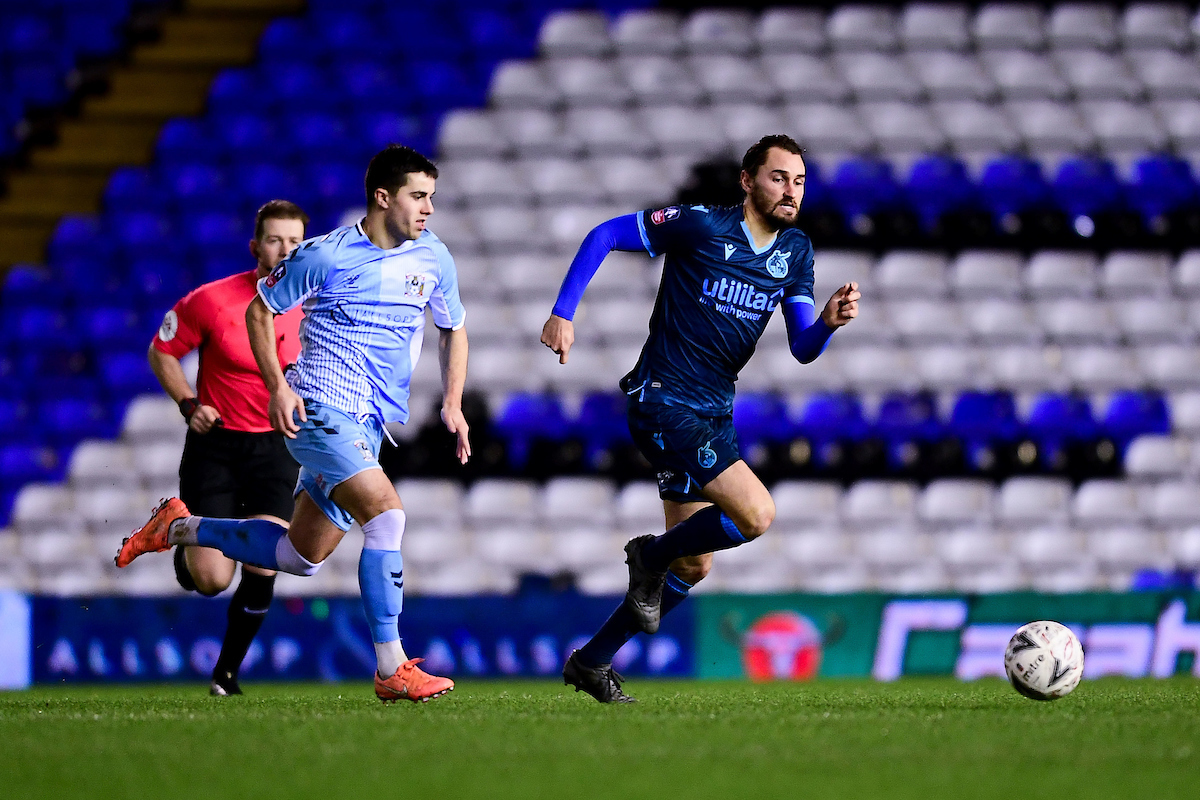 With Rovers creating more attacking play, they still had to be alert at the back, as the home side carried a threat throughout the first half. A searching corner from Jamie Allen reached the head of Dom Hyam, who guided a glancing header towards the target that was cleared off the line by Clarke-Harris, in what was an important interference to keep the deficit the one-goal.

In the final stages of the first half action, Liam Kelly curled an attempt from well outside the area high and wide of goal, as the one-goal advantage to the Sky Blues held into the interval.

At half-time, Holmes-Dennis made way for Victor Adeboyejo, as the Gas changed shape in order to offer more support to Clarke-Harris in attack.

It was Coventry who mounted the first goalmouth action of the second half, just minutes after the restart.

Skipper Kelly was able to feed the ball through to Jamie Allen, who shifted a low effort across goal that scampered just wide of the goalframe, taking a deflection in the process. From the corner that followed, Hyam directed a header harmlessly wide of goal, after throwing himself to the ground in a tussle with a Rovers defender.

The next goal of the contest was always going to be key and unluckily for Rovers, it fell the way of Coventry in just over five minutes after the break.

As with the first goal, it was a pinpoint pass from O’Hare that did the damage, as Pask was played in on goal and a powerful finish left little van Stappershoef could do to keep out the effort.

Just as Rovers restarted from Pask’s goal, the host were able to add a third.

It was a short corner that found Liam Walsh that created the opening, who looked to have no options available with a swarm of navy shirts blocking his sight on goal, but the midfielder blasted a low shot across goal that deflected off Biamou and into the net for the home side to take a three-goal lead.

In the remaining 30 minutes, the home side seemed content to protect their lead and limited any venture into their penalty area. Menayese had a tame effort comfortably stopped by Marosi, as the defender miscued a volley from the edge of the box.

Clarke-Harris shortly after tested the Coventry ‘keeper with a powerfully struck free-kick that kept low and swerved around the wall, but Marosi was able to get a strong hand to the effort to push it wide of the target.

In the final ten minutes, Ollie Clarke replaced Ed Upson, marking a return from injury for the midfielder.

The home side managed their lead and recorded the win to set up a tie at home against Birmingham City in the next stage of the competition.

Rovers are back on the road on Saturday, as they travel to face Rotherham United.

Tickets for our Sky Bet League One fixture at Bolton are now on general sale.

Rovers head to the Macron Stadium on Tuesday, 28th January.

Tickets for the fixture are now on general sale and advance tickets will be available up until 5pm on Monday, 27th January.

Tickets will be available on the day from the turnstiles at Block E of the Franking Sense South Stand. Tickets will be sold on a cash-only basis, from 7pm on the night. There is no increase in ticket prices in the evening.

Tickets prices are listed below.

For disabled tickets, please visit the Club store to enquire.