The lowdown on Saturday's Sky Bet League One encounter.

Rovers head to face Coventry City at the Sky Blues' temporary home at St Andrew's on Saturday, looking to take forward the positivity gained by a 3-0 win over Cheltenham Town in the Carabao Cup.

Last weekend Rovers were held at home against Wycombe, while Coventry picked a point with the same scoreline away at Bolton Wanderers.

Over 1,000 Rovers fans are set to make the trip to the Midlands for the fixture, as Graham Coughlan's side begin a busy period of games, with five matches in fourteen days.

Coach's Preview: First-team coach Kevin Maher was on press duties on Friday morning and spoke about how Rovers can build on Tuesday's win by taking the momentum gained during that comprehensive victory over Cheltenham Town in midweek and also touched on how he's is enjoying life at the Gas since arriving as part of Graham Coughlan's staff in the summer.

Player's Preview: Liam Sercombe also sat down with the local press at the training ground to offer his view on Saturday's encounter, as the midfielder recalled fond memories of playing at St Andrew's.

Opposition: Coventry are unbeaten in their three outings so far this campaign. Mark Robins side started the season with a 1-0 win over Southend United and last weekend, against a young Bolton Wanderers side, they played out a goalless draw. In midweek, the Sky Blues recorded a win over Exeter City in the Carabao Cup, setting up a second-round tie against Premier League outfit, Watford. In the transfer market, Coventry acquired the services of ex-Peterborough striker Matt Godden in the summer, with the forward hitting the net for his new club for the first time during Tuesday's win over Exeter City.

Last Encounter: Rovers travelled to face Coventry at Rioch in April with the game ending goalless. Tom Davies was in the ranks for the Sky Blues that day. In the reverse fixture last season, Rovers secured a 3-1 win over the Sky Blues at the Mem, with goals from Gavin Reilly, Ollie Clarke and Tom Lockyer.

Travel and Ticket Information: Tickets will be available on the day, though it should be noted this transaction will be cash only. Ticket prices are £20 for adults, £15 for Seniors, £15 for young adults, Students and Members of the Armed Forces £15 and £10 for under 18's. @awaygamesinfo have compiled a handy guide to what supporters can do in and around St Andrews, which can be found HERE.

Keep Up to Date with iFollow: iFollow Gas will help you keep track of the action as it unfolds this season with a number of different packages available. Subscribers based in the UK can listen to live commentary as the action unfolds at St Andrew's - with an audio season pass priced at £45 or a monthly audio pass costing £4.49. A new package available is the one-match audio pass, which is priced at £2.50. If you are based outside the UK then you can purchase a match pass for £5 to watch the live match live. To browse the match pass packages, please click HERE.

The Gas were dealt a sucker-punch before half time, as Jordan Shipley smashed home an effort from just inside the box as the first half was drawing to a close.

As Rovers began to put serious pressure on the Coventry goal in the second half, the defensive solidity sacrificed allowed the opposition to put the game to bed through a fantastic effort from substitute Gervan Kastaneer.

After making five changes from his squad prior to the Cheltenham Town game, manager Graham Coughlan opted to stick to his side that emerged victorious from there midweek tie. This included maintaining the striking partnership that showed real signs of promise in that Carabao Cup game, with Jonson Clarke-Harris linking up with Tyler Smith upfront.

Furthermore, Coughlan once again referred to Alfie Kilgour as a 'future captain', and his performance on Tuesday night was enough to convince the Gaffer to keep him in the starting lineup, meaning he claimed his first start of the season. 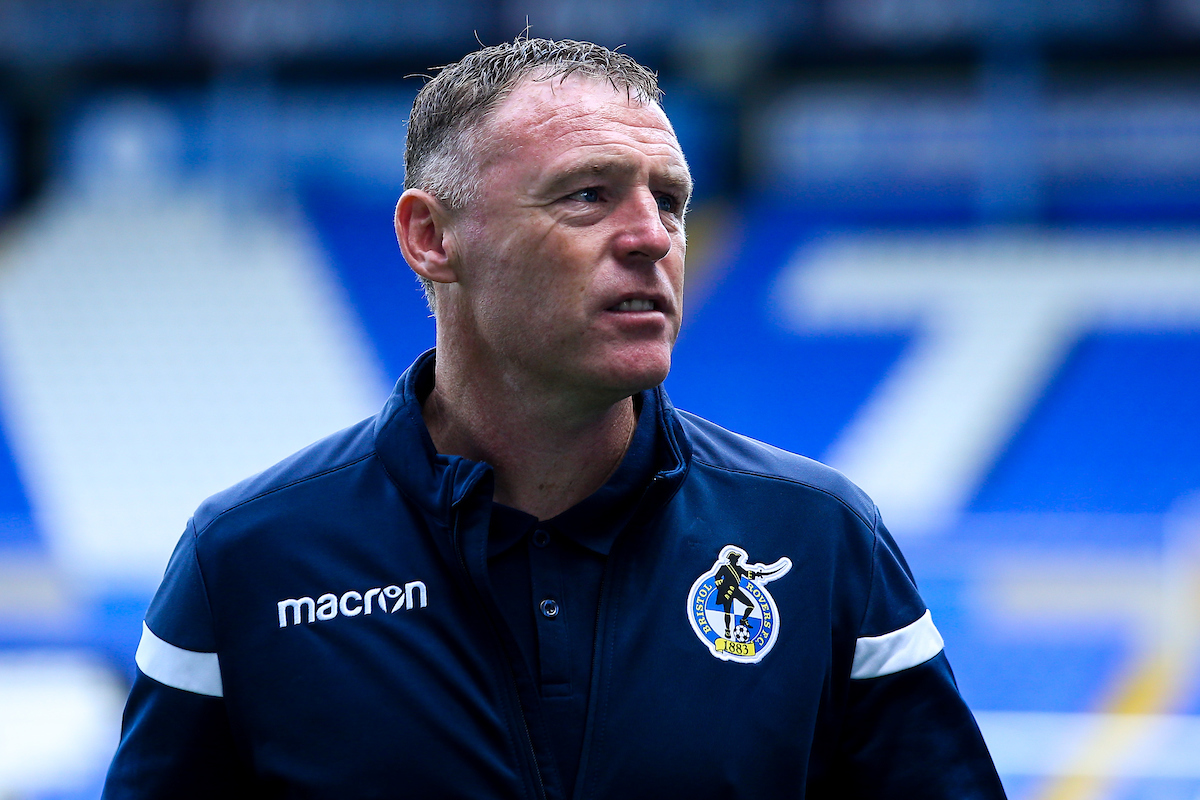 The game took a while to really get underway, as both sides took time to assert themselves on the game. It was Coventry he posed the early threat around the 15-minute mark as a smart ball down the left-hand side unleashed Hiwula, who looks to smash a ball across to box, but Davies was alert to block it well.

Moments later, as if the Coventry chance injected a bit of life into the game, Rovers found their first opportunity, as Clarke showed some independent brilliance to wriggle away from three Coventry men and begin a burst into the box from the right side. As he galloped towards goal he faced a dilemma, to shoot or to square it towards his strikers in the box. He opted to rifled one on goal but watched his effort clear the bar.

On the 20th minute, Godden almost had the perfect opportunity to mark his first Coventry league start with a goal, as he picked the ball up 20 yards out and turned towards goal. He hit a low shot towards the left-hand post, and as Jaakkola leaped to the shot, saw the ball clang off the upright and go out for a corner.

After stemming a stream of Coventry pressure, Rovers managed to carve out another good chance as Clarke-Harris was brought down whilst 30-yards out from the opponent's goal. Sercombe took the resulting free-kick, arrowing his strike towards the far post. At the destination of the ball was Tom Davies, who had moved well to escape his man, but didn't time his jump right, and headed his effort over.

Kyle Bennett illustrated a bit of Rovers frustration as he tripped Liam Kelly midway inside his half, leading to the first card of the day. 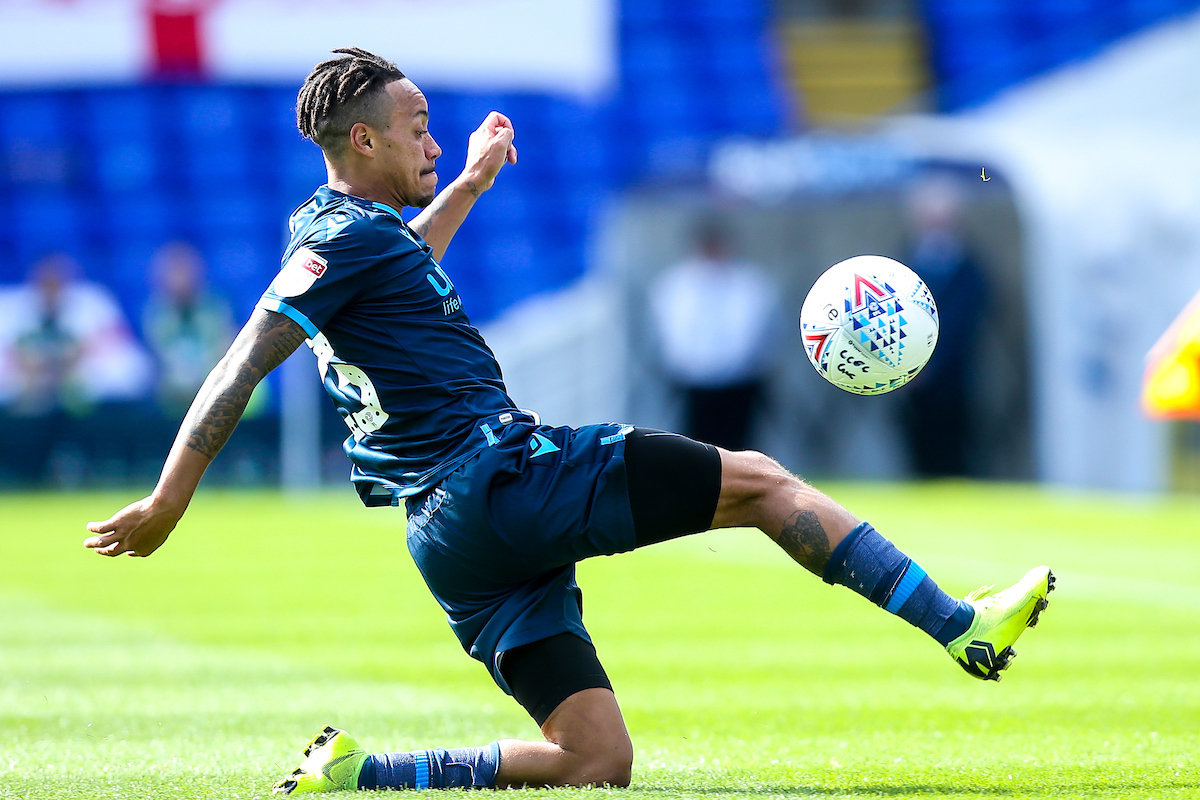 A moment of madness before the 40th minute saw Rovers begin a brilliant counter-attack through Clarke-Harris who played a pass centrally to Bennett, who's touch allows the ball to escape him and miss out on a great chance. Coventry then picked the ball up and instantly burst forward, unleashing a cross towards the area which Jaakkola could only get a weak touch too. It fell to Godden who laced a shot goalwards, needing a vital block from Luke Leahy to avert a certain goal.

As half time approached Coventry showed real ability on the break as they rushed forward through Jobello on the right side, he clears Leahy and squares a ball towards Hiwula in the centre. The attacker mistimes his strike though and clips it wide past the left post.

As the board went up to indicate stoppage time, Coventry struck a demoralizing blow, once again on the break. They flew down the right-hand side once again and squared across towards Shipley who rifled a low right-footed shot into the bottom left corner of the net meaning the Gas went into the break 1-0 down.
In a similar style to the first half, the second period began slowly, but with much for impetus from the Gas, as they began to take control of possession, with Liam Sercombe at the center of most things. At first, he troubled Coventry with a dangerous cross early on before striking an effort himself around the 55th minute that required a good block.

Despite it only being his first league start of the season, Kilgour wasn't afraid to try the unorthodox on the hour mark as he galloped into Coventry half before blasting an effort from around 40 yards out. It caught the keeper out, but also narrowly cleared the bar. 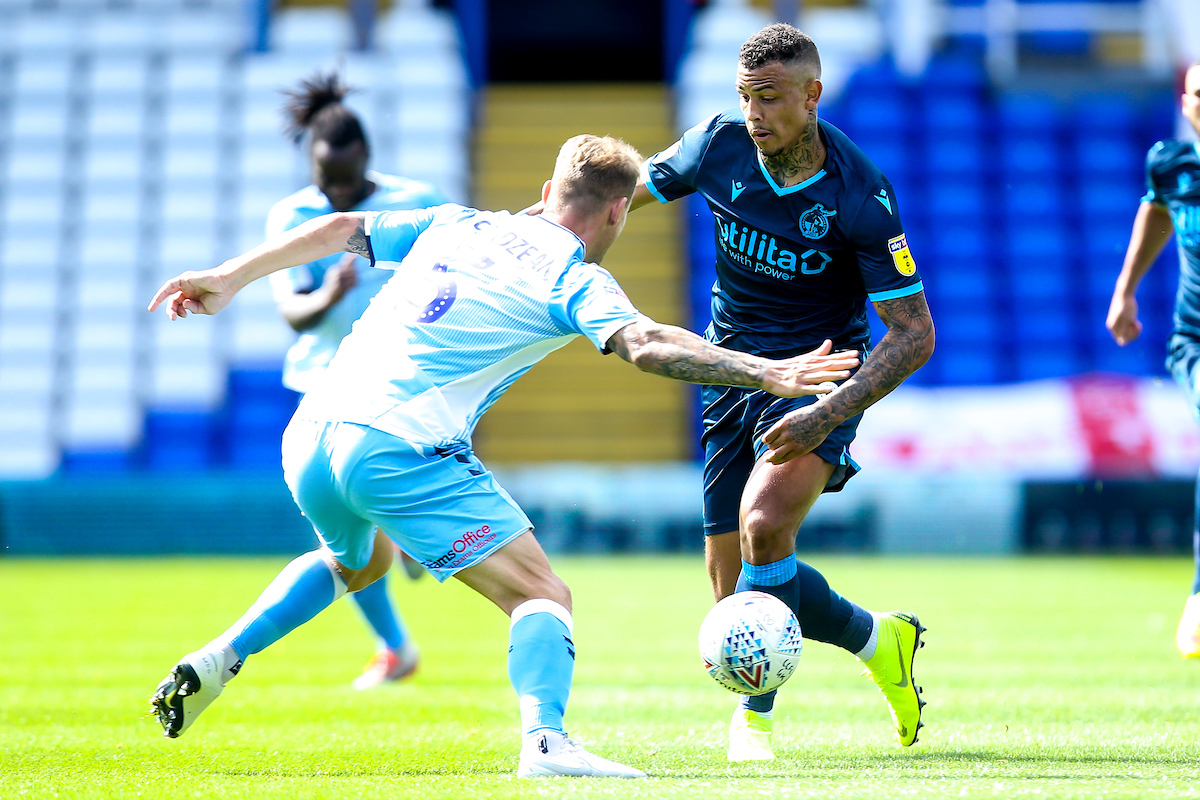 Ed Upson was substituted on for Sercombe around the hour mark too, and he attempted to make an impact instantly as he received the ball on the edge of the box, before chesting it and firing a volley on goal. Despite the awkwardness of the strike, it was a good effort but ultimately looped over the bar.

Coventry's first chance of the second half came some 20 minutes in, as Westbrooke gathered the ball in a central area just outside the box. His first touch clipped it behind him before he turned and hit it with his left foot, but his strike fizzed over the bar.

As the game ticked past the 70th minute, Rovers had the ball in the Coventry net as a Hare corner found Tom Davies at the back post, but has his header hit the back of the net, the referee blew his whistle. A free-kick was awarded for a push in the box, no goal.

Shortly after this, Coventry almost put the game to bed, as a brilliant cross was hung towards Matty Godden who rose well to make the ball. His bullet header was directed goalbound, but Jaakkola reacted well to catch the ball.

With 77 minutes gone, Kilgour was on hand to deny Coventry another chance on the break as they took the ball wide before whipping a low cross towards the 6-yard box. Tussling with the opposition, Kilgour did well to emerge victoriously and slide the ball clear. 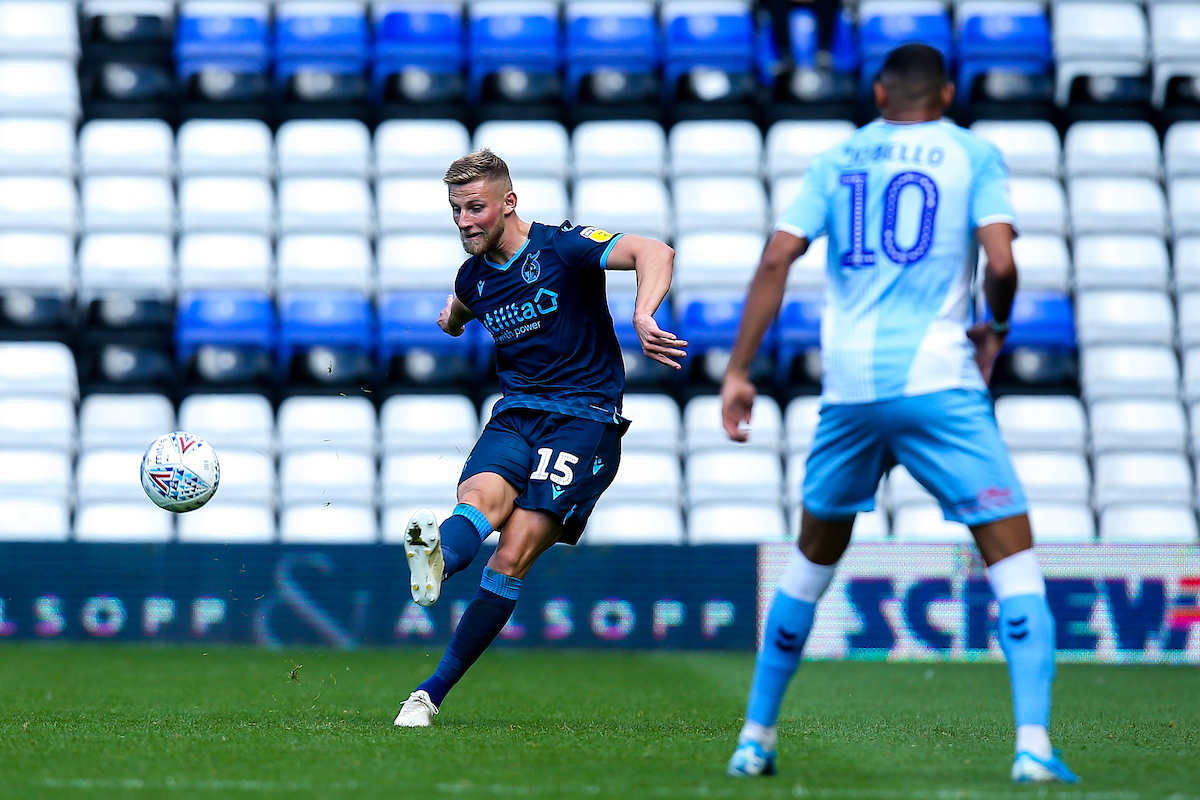 As Rovers looked to find an equaliser they were dealt a knock-out blow as Kastaneer emerged off the bench for the opposition to hit a brilliant strike moments later. Picking it up outside the area, he cut in and unleashed a powerful effort which ricocheted off the post and into the net, leaving Jaakkola with no chance.

The Gas now look forward to a midweek visit from Tranmere Rovers.

Tickets for our fixture against Coventry City will go on sale on Monday 29th July.

Rovers will visit St. Andrews Stadium to face Coventry City in their 2nd away game of the 2019/20 campaign.

Tickets will go on sale for Priority Group One supporters on Monday 29th July.

On Thursday 1st August, supporters who are eligible for Priority Group Two will get access to tickets.

Disabled tickets are charged at the same rate as normal prices - with carers free of charge.

Below is a guide to purchasing away tickets online.

- Head to Desktop MyTickets page by clicking HERE
- Log into your account using the email address & password associated with the Season Ticket
- Click on the Buy Tickets from the menu options across the top of the screen
- Chose the option for Away Matches – Priority Sale. This option will only be visible to 2019/20 Season Ticket holders
- Chose the relevant match and commence the sales process

Furthermore, fans may purchase tickets on the day at the turnstiles, though it should be noted this transaction will be cash only.