All the information you need ahead of the Gas' weekend clash with Oxford United.

The Gas are so far unbeaten at home over this campaign and haven't conceded a goal at the Mem in their three games here, against Cheltenham Town, Wycombe Wanderers, and Tranmere Rovers.

Emotions are likely to be high at the Oxford game as the Club comes together to celebrate the life of Junior Agogo through a minutes applause before kick-off, and a number of other tributes throughout the day.

Coach's Preview: Manager Graham Coughlan took questions from the press on Friday morning - he began by expressing his condolences to Agogo's family, before looking forward to the task at hand.


Player's Preview: Following his impressive 'Beckham-esque' cross to set up the first goal in the midweek fixture, Josh Hare faced questions from the press in anticipation of the coming test.

Opposition: Oxford United need very little introduction, with a strong rivalry built up between the sides over recent years, there is an aura of a 'local derby' approaching this weekend. Oxford have strengthened well over summer, with many labeling their business up with the best in the division, notable additions include Ben Woodburn on loan from Liverpool, Daniel Agyei from Burnley and a familiar face in Matty Taylor, on loan from Bristol City. Despite the quality of their signings, they sit on the same points as Rovers, only a place apart in the table, with their only victory coming courtesy of a 1-0 win over Peterborough United.

Last Encounter: The Gas have a relatively good record against Oxford, losing just twice in the last 11 outings, whilst beating them in seven of those 11. In their last meeting, the two sides met before the turn of the year when Rovers visited the Kassam Stadium, with the Gas coming away with a 2-0 victory and all three points. On that day, two goals from loanee Alex Jakubiak were the difference.

Online tickets for this fixture will be available until midnight on Friday, 23rd August for supporters wishing to collect tickets on the day as well as for the 'Print @ Home' option.

There will be no on the day ticket sales or seat swaps.

Supporters are reminded that any items that may incite hatred or abuse cannot be brought into the stadium and amnesty bins will be placed around the entrances for these to be disposed of before entrance to the ground will be permitted.

Keep Up to Date with iFollow: Follow Gas will help you keep track of the action as it unfolds this season with a number of different packages available. Subscribers based in the UK can listen to live commentary as the action unfolds at The Mem - with an audio season pass priced at £45 or a monthly audio pass costing £4.49. A new package available is the one-match audio pass, which is priced at £2.50. If you are based outside the UK then you can purchase a match pass for £5 to watch the live match live. To browse the match pass packages, please click HERE.

The Gas played a perfect tribute to the late Junior Agogo as they fought back in the spirit of the striker to claim a 3-1 victory against their rivals.

A superbly placed strike from Ben Woodburn shocked the Mem inside the first 30 minutes, but it only invigorated the Gas as they scored three to complete a phenomenal comeback.

Two first-half goals, one a brilliant volley from Ed Upson, the other a Jonson Clarke-Harris header put Rovers in the lead at the break. Then, just as Oxford began to apply real pressure in the late stages, fantastic combination play from Clarke and Nichols resulted in latter burying a third and burying Oxford.

Manager Graham Coughlan looked to build on the midweek victory by naming an unchanged side from the 2-0 win over Tranmere Rovers. The only change in the squad came in the form of Mark Little, who marked a significant step in his injury recovery by returning to the squad for the first time since his outing against Wycombe Wanderers. 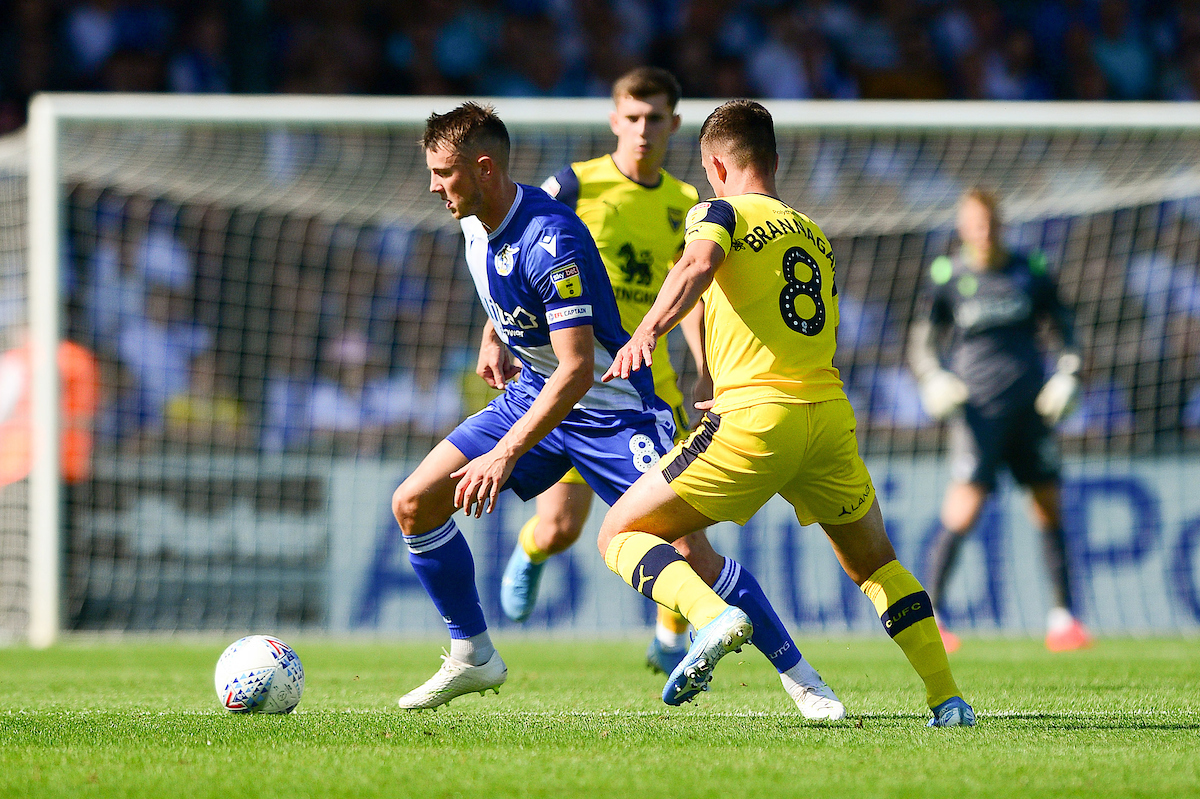 Alfie Kilgour was responsible for a lovely through ball inside 10 minutes that found Jonson Clarke-Harris early on, stroking a lofted pass from inside his half. Clarke-Harris pulled it down inside the box, but his second touch got away from him and allowed the 'keeper to collect.

A low cross from Tareiq Fosu came as part of a quick Oxford response, it found Matty Taylor inside the area, but the striker missed the ball entirely and spurred a golden Oxford chance.

A coming together between Alfie Kilgour and Matty Taylor saw Taylor go into the book on the 14th minute.

Another name went into the book just after the 20minute mark as Ed Upson clipped Tareiq Fosu on the turn.

A free-kick from deep on the right side found Tom Davies minutes later, but Davies couldn't see through the crowd of players to time his jump and saw his header loop over the bar.

On the 27th minute, largely against the run of play, Ben Woodburn found space and bent one towards the bottom right. Jaakkola saw it late as it traveled past the Rovers defence and nestled into the corner.

Moments later, Taylor was down injured for Oxford and found himself taking no further part in the game just as the half-hour mark passed. At this point, the game entered a lull, but for the work of Fosu who looked very bright for Oxford turned and firing on goal shortly after Taylor went off.

However, it was Rovers who would land the next big blow in this game. Seemingly without much direction, a goal came very much out the blue as Leahy swung a free-kick towards the box, after it went all the way through, it was recycled into the area. Oxford cleared, but only as far as Ed Upson who took a touch and volleyed it straight back on goal perfectly finding, and Upson wheeled away celebrating. 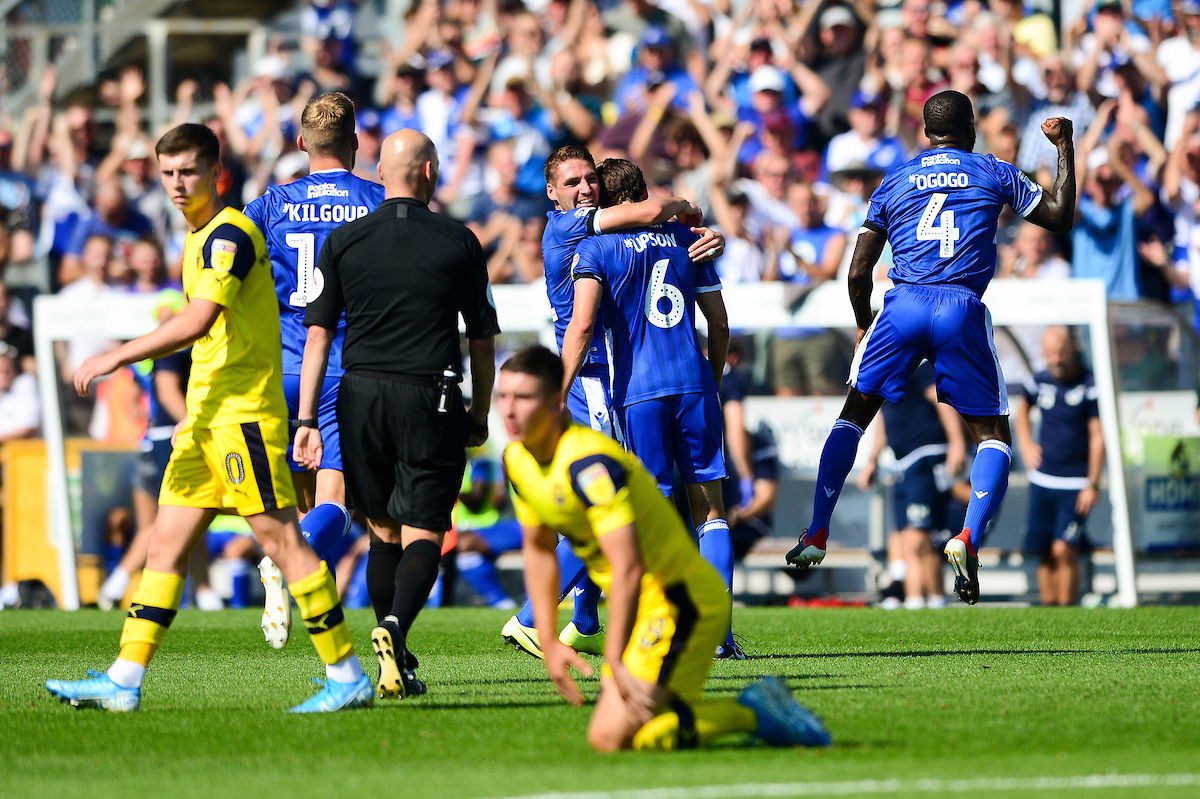 As half time approached, a familiar partnership combined to give the Gas the lead at the break. Josh Hare received the ball on the right flank from Ogogo, and almost by reflex, he looks up to find Clarke-Harris, the ball followed. Just like on Tuesday night, the cross was perfect and Clarke-Harris latched onto it to head home a 2nd league goal of the season, and a 2nd for Rovers on the day just before half time.

Oxford started brightly in the 2nd half, as Ben Woodburn looked a real threat down the left side, dancing away from his man and firing a shot on goal. It was blocked, but only back to Woodburn who shot again, this time requiring a vital header to steer it wide. 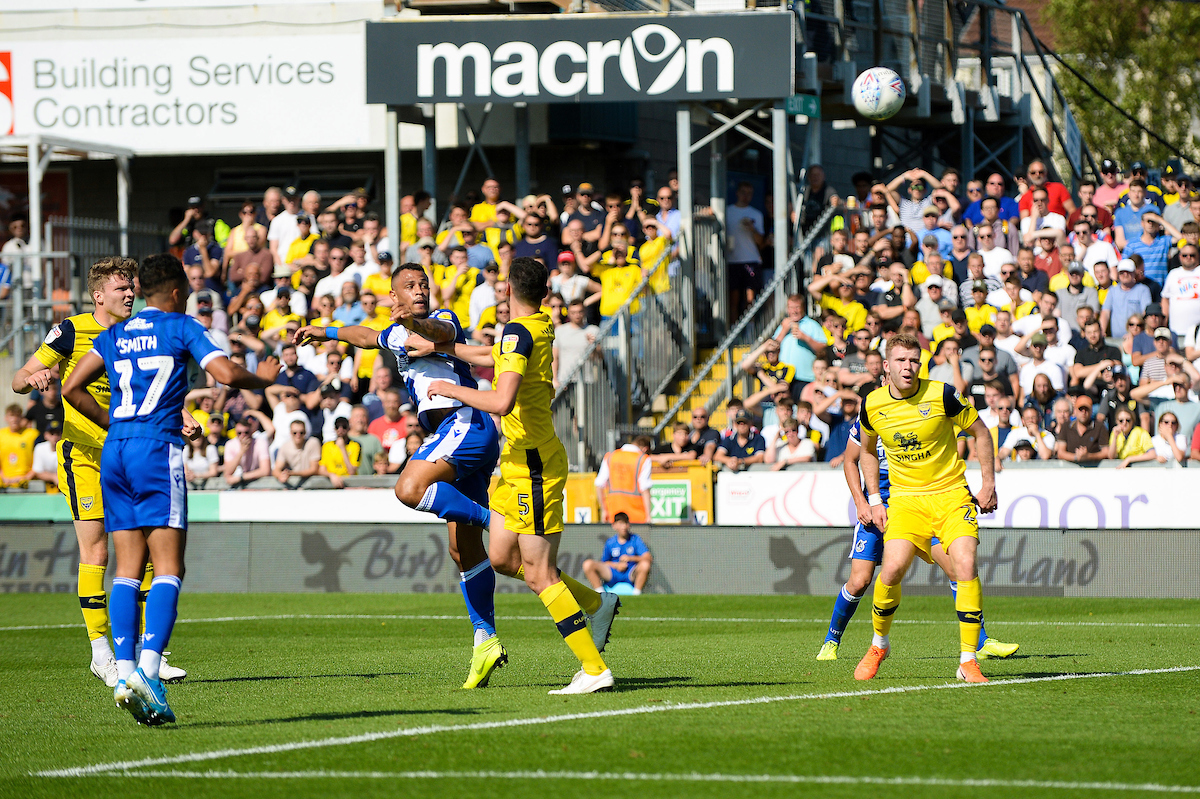 The corner followed, and Oxford were almost level, as the opposition fired a shot on goal which appeared to be going in following a goalmouth scramble. Just as the Oxford crowd began to roar, Luke Leahy appeared on the line to boot the shot away.

The Gas took around 10 minutes to settle into the second half but when they did, they went almost as close as Oxford did. Clarke-Harris pulled down a fantastic lofted pass just outside the area, looked up and curled a pass wide towards Leahy on the left. The left-back chested it then fired the ball back towards the 6-yard box where Smith was waiting, but his jump was mistimed, and he headed over from close range.

Signaling the evenness between the two sides, the next chance would fall to Oxford, as Henry picked the ball up on the right side and darted towards the byline, he fizzed a low ball across the box, but the outstretched striker in yellow couldn't make contact as the ball whizzed past.

Rovers had the ball in the net again on the 65th minute as Josh Hare floated and fantastic cross in from deep on the right. Luke Leahy latched on to the end of it to head home, but the referee had already blown his whistle for a coming together between Smith and an Oxford defender.

Just as the game passed the 70th minute, goalscorer Jonson Clarke-Harris was replaced by Victor Adeboyejo, shortly followed by a swap between Tyler Smith and Tom Nichols. 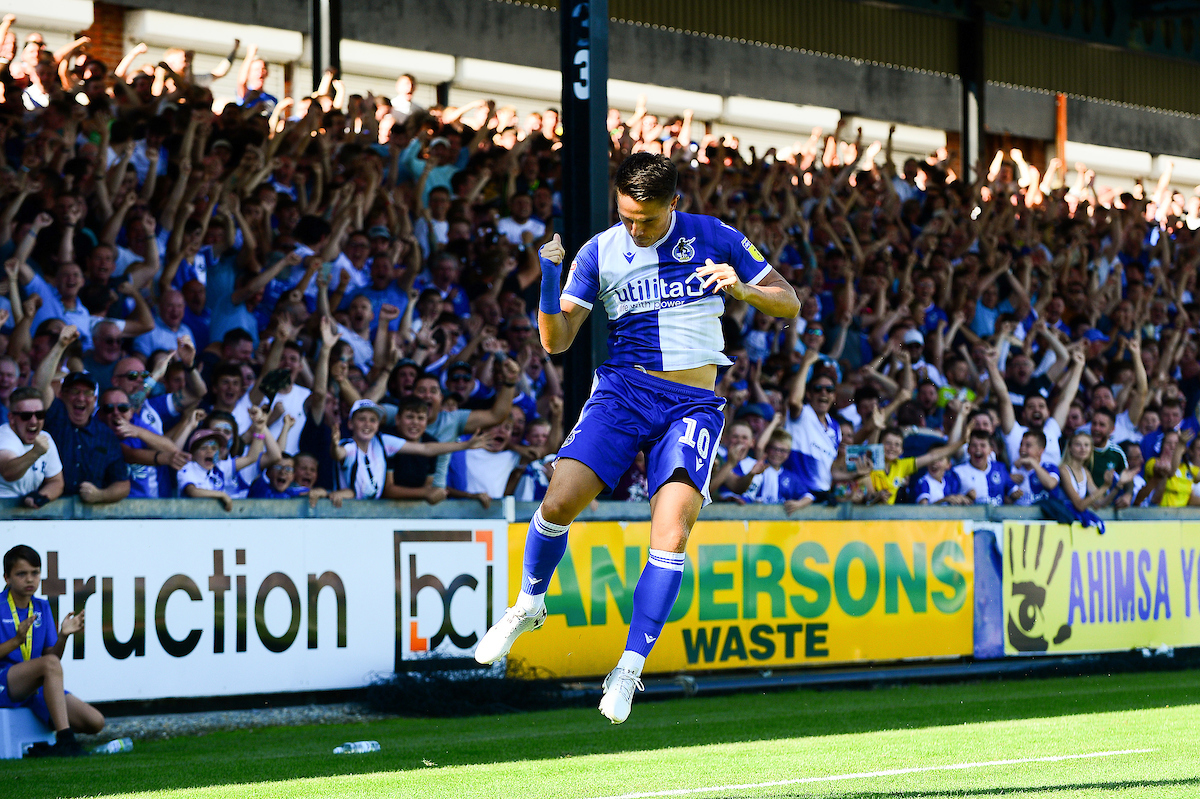 With 15 minutes remaining, Ollie Clarke turned on the style as he ghosted past 3, maybe even 4 Oxford players before dummying a shot and instead he fed it to Tom Nichols. He took the ball superbly, turning his man and rifling it home to make it 3-1.

Rovers now face a big test against Brighton in the Carabao Cup on Tuesday.

Rovers host Oxford at the Memorial Stadium on Saturday, 24th August (KO 15:00), in what will now be an ALL TICKET fixture.

Online tickets for this fixture will be available until midnight on Friday, 23rd August and we are now able to offer a 'Print at Home' service for tickets purchased online (please note that these tickets must be printed at home or shown on a compatible mobile device). More information on how to use our Print at Home service can be found HERE.

Away supporters looking to purchase tickets for this game can do so via oufctickets.co.uk and can be collected at the Memorial Stadium. There will be no away tickets available for purchase on the day of the game.

Supporters are reminded that any items that may incite hatred or abuse cannot be brought into the stadium and amnesty bins will be placed around the entrances for these to be disposed of before entrance to the ground will be permitted.

Bristol Rovers is a family and community club and it is imperative that our supporters continue to represent us favourably at all times. Can we remind supporters that it is an offence to throw any object into the playing area or into the crowd. Any supporters that throw objects onto the pitch or are found to be in breach of ground regulations will be ejected from the stadium immediately and be subject to indefinite bans.

We’d like to thank all fans for their continued support and cooperation in creating a safe environment for everyone this weekend.