We take a detailed look at our Carabao Cup first-round opponents, Crawley Town.

The thirty-nine-year-old has been at the helm at the Checkatrade Stadium since the May 2017, undertaking his first full-time job in management with the Sky Bet League Two outfit.

At the international level, Kewell featured at for native Australia at both the 2006 and 2010 World Cup finals, featuring 56 times for his country - as well as playing in two Champions League finals while at Liverpool.

After retiring from playing in 2014, the Kewell concentrated on obtaining his UEFA Pro License coaching qualification and was in charge of the under-23s at Watford from June 2015, helping a number of his squad to make their first-team debuts at Vicarage Road.

In his first full season in charge at Crawley, Kewell guided the club to a 14th placed finish and started the 2018/19 campaign brightly, beating Cheltenham Town away in the opening fixture of the season.

Kewell is assisted at Crawley by former Newport County AFC and Linfield Manager, Warren Feeney – with the pair knowing each other from their days playing for Leeds United. 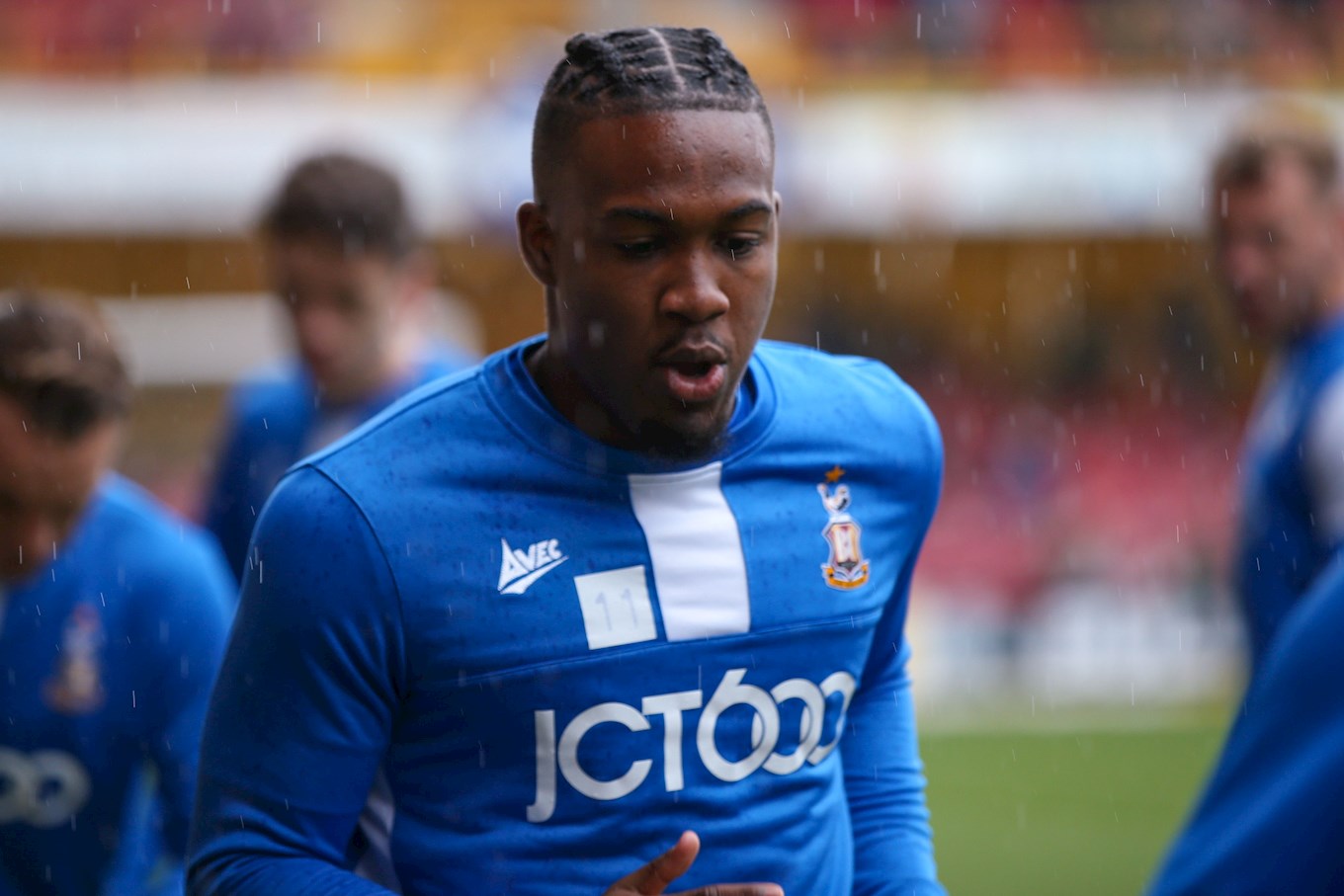 Dominic Poleon joined the Reds in the summer for an undisclosed fee from Bradford. On his arrival at Crawley, Kewell stated that he hoped the striker could make a big mark in Sky Bet League Two.

Yet to find the net for this new club - the former Leeds, Oldham and AFC Wimbledon man has been involved in Crawley's opening fixtures.

Last season, the twenty-four-year-old scored seven goals for the Bantams and can also occupy a threat from wide positions.

Sports Editor at the Crawley Observer, Graham Carter, details what Rovers can expect from the Sky Bet League Two outfit on Tuesday evening.

"Crawley Town are looking to build upon last season's useful debut season of Harry Kewell in his first season as a first team boss.

Reds finished 14th which was much better than expected by the bookmakers, who listed them as second favourites for the drop.

The summer has seen Crawley busy on the transfer market with no fewer than ten new signings arriving at Broadfield Stadium.

As well as established players, Kewell has brought in some talented youngsters who are keen to break into the team like Reece Grego-Cox (ex-QPR), Tarryn Allarakhia (Colchester United) and Brian Galach (Aldershot).=

Over the summer Crawley have sold some players who have gone to higher clubs: winger Enzio Boldewijn (Notts County) and Jordan Roberts (Ipswich Town) plus defender Josh Yorwerth (Peterborough United). Those leaving were all popular with the fans and will be missed.

Kewell is looking for improvement this season and during pre-season hinted at a possible push for the play-offs.
At a fans' forum last Tuesday night, Kewell did not give a specific target but gave his aims for the season as being: "I always want more and believe there is more in this team.

“We need to be able to go to that next level.

“We’re moving in the right direction, but we need to install this winning mentality of taking our chances now. I really would like to see my team demolish oppositions now.”

Reds made the perfect start by kick-off their League 2 campaign with a 1-0 away win at Cheltenham Town, thanks to a goal by one of the newboys, Ollie Palmer.

The 6ft 5ins forward scored his second goal in two games on Saturday as Crawley crashed back down to earth with a 3-1 defeat at home to Stevenage.

This was disappointing but of course it is still very early days in the season and whenever a set of new players comes in, it is always going to take time for them to gel.

With the quality of players recruited, and Harry Kewell with a year's experience in the job under his belt, Reds fans should hopefully be looking forward to a better season with the team pressing for a place in the top-ten."

Rovers progress to the Carabao Cup second-round with victory over Crawley Town at the Mem on Tuesday night.

Kyle Bennett opened his account for the 2018/19 campaign with a first-half header - with the winger's goal and a late strike from Ollie Clarke proving to be enough to secure Rovers' name in the hat for the second round of the competition - although Crawley did find the net in the dying moments through Mark Connolly.

In naming his starting XI for the fixture, Manager Darrell Clarke opted to make four changes to the side that faced Accrington on Saturday.

The headline change came in the shape Adam Smith was chosen instead of Sam Slocombe in goal. Sam Mathews made his first start for Rovers, while both Daniel Leadbitter and Chris Lines were recalled to line-up.

In terms of early changes, there wasn't much that either side could muster in the initial ten minutes of the contest. The opening chance of the game was created when a searching cross from the right via Daniel Leadbitter was headed wide of goal by Kyle Bennett - in what would have been a carbon copy of Stefan Payne's goal against Accrington.

The visitors went close themselves just moments later - as a low cross from the right from George Francomb found Panutche Camera free inside the Rovers area. With just Smith to beat, the striker took a heavy touch and the ball deflected behind for a goal-kick, in what was a real let-off for the home side.

With the game developing a decent pace, a well-timed sliding challenge from Daniel Leadbitter set up a rapid counter-attack from Rovers. Bursting forward with the ball at speed, the right-back opted to square a cross to the edge of the Crawley area. The ball ballooned high and rebounded into the path of Chris Lines, but attempting a trademark volley, the midfielder's effort skewed off target.

Rovers began to demonstrate a slick passing game on the pristine surface at the Mem. Following an interception by Kyle Bennett, a forward ball to the feet of Sam Matthews was greeted by a smart turn that opened up space for the winger to burst into. With the Crawley defence retreating, Matthews guided a pass through to Stefan Payne, who drilled a fierce effort towards goal that was pushed wide by Yusef Mersin.

The deadlock was broken on the half-hour mark by the hosts. A directed corner from the right by Sam Matthews picked out the towering figure of Stefan Payne. The striker guided the ball into a dangerous location, which allowed Kyle Bennett to guide a header into the far corner to open the scoring. 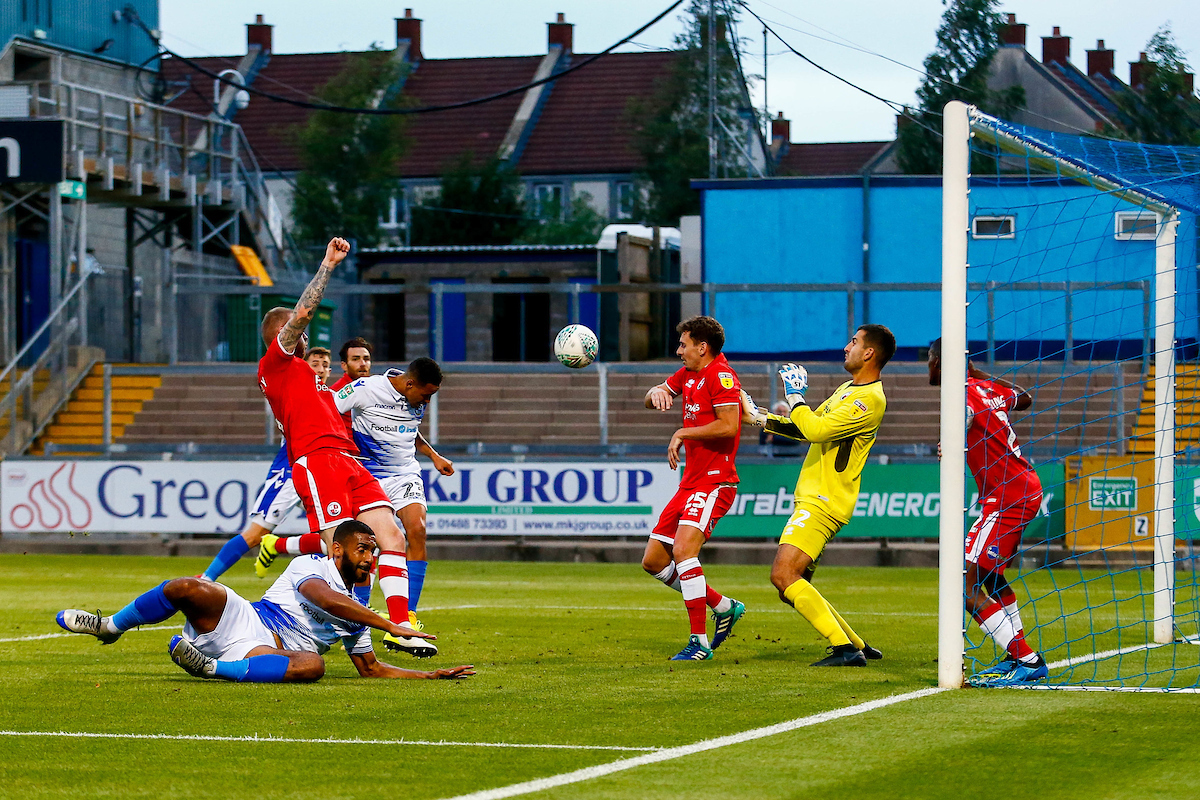 The goal sparked the home side into further attacking endeavour, as a pass from Bennett into the area picked of Matthews, who saw his shot on goal deflected behind for a corner.

With half-time approaching, Rovers had a chance to further the lead, as break down the right by Sam Matthews led to the winger laying off a pass to Chris Lines. Forcing a first-time effort towards goal, Lines saw his attempt headed over the crossbar by Mark Connolly, with the shot looking destined to cause Mersin problems in the Crawley goal.

After the break, there was no sign of Rovers altering their attack-minded play. After receiving the ball out wide, Sam Matthews outside and unleashed a left-footed shot towards goal that bobbled in front of Mersin, who could only clutch the attempt at the second attempt, with a number of Rovers players charging into for a close-range tap-in.

In wide areas, Rovers looked threatening and a dangerous cross from the right from Kyle Bennett sliced open the Crawley defence. The delivery meandered its way through to Stefan Payne, who could only lift his close-range high over the target.

Matthews, who looked impressive for the home crowd side through the encounter, again found space to launch a shot towards after spilling in from a wide position. On this occasion, the youngster decided to add more height to his left-footed attempt, that allowed Mersin to make a diving save to his right to claim the effort.

As the second half progressed - Ed Upson was introduced from the bench, replacing goalscorer Kyle Bennett - with Rovers adapting shape to cement the one-goal lead.

Inside the final ten minutes, Rovers extended their slender lead. Ollie Clarke ran with purpose with the ball at his feet and took advantage of the ample time and space to drive a low effort towards goal that nestled in the bottom corner.

Rovers responded and were able to manage the tricky period of stoppage time - which was aided by a late red card to Dominic Poleon, as the substitute was dismissed for picking up a second yellow card, with Rovers holding out to secure the win to progress to the next stage of the competition.

Tickets for our Carabao Cup First Round game with Crawley Town at the Mem are now on sale.

Rovers host The Reds on Tuesday 14th August, kick off at 7.45pm.

Tickets for the game are no longer available on online, but supporters can purchase tickets throughout the day from the Club Shop at the Mem, or from the match day ticket office at the ground that opens at 5pm.