All the pre-match stats heading into Friday's fixture.

Rovers head into the busy Easter weekend with the visit of Bury to the Memorial Stadium.

After taking the lead last weekend at Peterborough United, Rovers were unable to hold onto a narrow lead to pick up all three points on offer and had to settle for a point.

Easter throws up two important fixtures for Rovers, as they face two sides that are fighting to secure their places in SkyBet League One next season, with Friday's fixture against Bury quickly proceded by the long journey to face Fleetwood on Easter Monday.

Darrell Clarke's View: The Manager celebrated his four-year anniversary in charge of Rovers this week and looked back on four years at the helm, as well as offering his insight into Friday's opponents.

Player's View: Tony Craig was chosen to face questions from the local press this week, as the defender spoke about opening his account for Rovers last weekend and the busy schedule of Easter fixtures.

Opposition: Bury are ten points adrift from safety in SkyBet League One and have only won once on the road all season. The Latics appointed Ryan Lowe as Manager back in January and are currently without a win in four games, but do have fixtures against fellow relegation candidates to come between now and the end of the season.

Last Time Out: Rovers recorded a 3-2 victory at Gigg Lane earlier this season. Tom Lockyer opened the scoring just ahead of the hour mark before a brace from Billy Bodin gave Rovers a comfortable lead heading into the closing stages. There was a fightback from the hosts, that saw both Jermaine Beckford and Nicky Ajose pull back two late goals inside stoppage time, but Darrell Clarke's side held out to pick up all three points.

Tickets: Booking tickets ahead of the early bird deadline is a great way to save money on tickets for Friday's fixture. For full information, click on the link below.

Book Early and Save on Friday's Game

A late Chris Lines penalty provided Rovers with a comeback victory over Bury at the Mem.

In a first-half of few chances, Rovers edged the attempts count, as Tom Nichols had a close-range opportunity held by Connor Ripley and Chris Lines saw two long-range attempts go narrowly wide, before Sam Slocombe was called into action just before the break, as the Rovers shot-stopper tipped an attempt by Neil Danns onto the crossbar.

After the break, it was Bury who broke the deadlock ten minutes after the restart, as Neil Danns curled home an effort to put his side ahead.

Rovers responded to going behind with a double change, as the substitutions immediately paid off, as Dom Telford placed home a tight finish to level the scores shortly after his introduction to the contest.

With just five minutes left on the clock, Rovers were awarded a penalty for a foul on Kyle Bennett, with Chris Lines again holding his nerve with a crucial penalty to give Rovers the win. 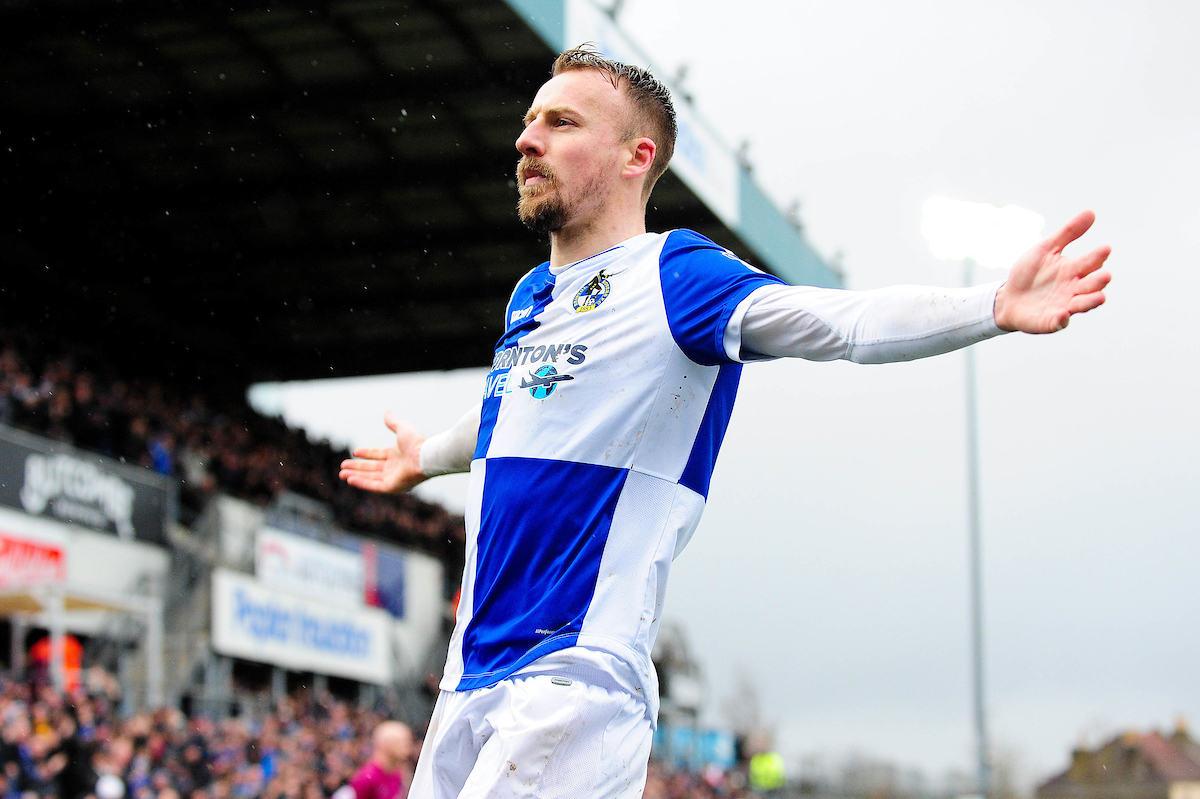 In the team news, there were three changes for Rovers heading into the encounter. Tom Lockyer, who returned from China this week with his national side, came straight back into the mix and was joined by Tom Nichols and Bernard Mensah.

Mensah's inclusion in the starting eleven was his first start for Rovers - following his arrival at the Mem in January.

Bury, meanwhile, also made three changes, as player/manager Ryan Lowe named himself on the bench for the encounter.

Although chances were at a premium, the opening stages of the contest had a lively feel, with both sides looking to move the ball quickly when in possession.

The first real chance of the game fell to Rovers, as Ollie Clarke's well-struck volley was pushed away by Connor Ripley, but only as far as Tom Nichols. Arriving at the ball the striker could only react late and sent his close-range header in the arms of Ripley.

Rovers continued to look a threat and continued to have the better of the chances. Kyle Bennett picked out Chris Lines in space twenty-five yards out from goal, as the midfielder let the ball run across him before unleashing a right-footed attempt that narrowly flashed wide of the target.

As the half progressed, Nichols had another opportunity land his way, as Ellis Harrison's deflected attempt arrived at the striker, but he was unable to get the ball out of his feet to force an attempt on goal. The chance was quickly followed by a well-directed free-kick to the near post which Nichols just glanced wide of the target.

Ahead of the break, Sam Slocombe was called into action as Neil Danns hit a close-range volley towards the target that the goalkeeper managed to tip onto the crossbar.

Following the interval, there was a noticeable upturn in tempo from Rovers. Joe Partington tried his luck from the outskirts of the penalty with an attempt but mistimed his connection with the ball, just ahead of Kyle Bennett producing a well-struck shot from twenty-yards that bounced straight back off the post, with Ripley appeared to be beaten.

Bury then took the lead against the break of play, as Neil Danns converted a curling effort past Sam Slocombe to give Ryan Lowe's side the lead.

Darrell Clarke made a double change on the hour mark in response to going behind, as Dom Telford and Byron Moore were introduced and one of the substitutes had an instant impact. After a flowing move down the left, Kyle Bennett glanced the ball through to the unmarked Telford inside the Bury area, as the striker showed good composure to lift a tight finish out of the reach of Ripley to level the contest, in what was his first goal at the Mem.

Rovers pushed for a goal to set them ahead, as Ellis Harrison saw a well placed shot from outside the box tipped around the upright by Ripley, who had to be at full stretch to be equal to Harrison's powerfully struck shot that looked destined for the far corner.

There was a late twist in the game as Rovers were awarded a penalty five minutes before the final whistle, as Kyle Bennett was fouled inside the Bury penalty box. Chris Lines was tasked with taking the penalty and held his nerve to send Ripley the wrong way from the spot, as the midfielder placed a finish into the bottom left corner to provide Rovers with the three points. 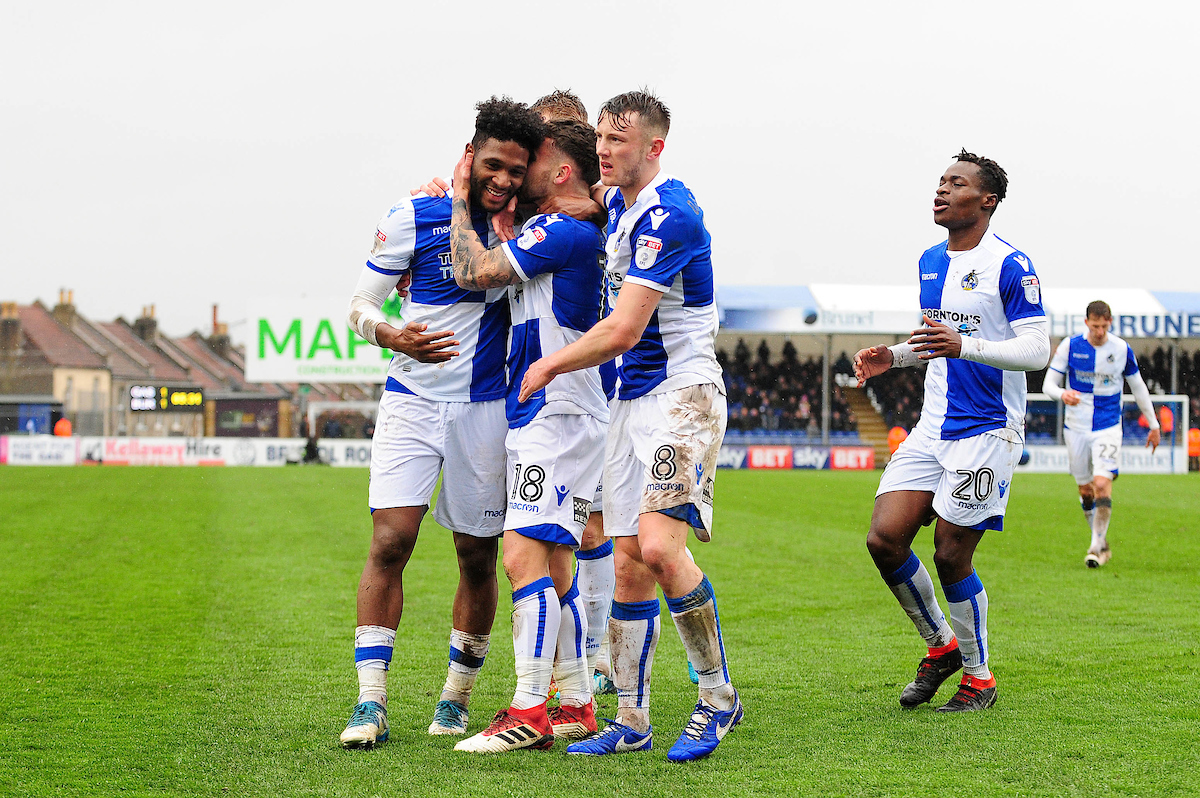