Rovers travel to the New York Stadium this Saturday to take on another promotion chasing side in Rotherham United.

Darrell Clarke and co venture north for the last time this season for their penultimate away fixture and will have to be at their best to take something from the fourth placed Millers.

Charlton Athletic and Blackburn Rovers have been Rovers' previous two opponents, claiming respectable 1-1 draws at home to both the top six sides heading into another encounter against a promotion contender this Saturday.

Gaffer's View: The Manager was again on press duties in the usual Thursday lunchtime timeslot and discussed a whole host of matters.

In a rush? We have condensed what Darrell said heading into Saturday's game into a five-point preview.

Player's View: Lee Brown spoke with the local media to give his take on Saturday' trip north.

Opposition: Rotherham secured an important victory midweek against Gillingham. The three points in Kent moved Rotherham onto a points tally of 73, nine points ahead of the chasing pack outside the playoff spots.

A seven-game winning run between January and February allowed Rotherham to rise into the playoff contention and a steady show of form since has given Paul Warne's side the chance to bounce back to the Championship at the first attempt.

Last Time Out: Rovers battled back from going a goal behind in the reverse fixture earlier this season to record a victory at the Memorial Stadium. Ryan Williams had edged Rotherham ahead on the stroke of the hour mark, but Rovers responded with goals from Ellis Harrison and Liam Sercombe.

Tickets: Rovers fans will be able to pay on the day. For full information, please click on the link below.

Pay on the Day Available at Rotherham

An early goal from Michael Smith and a late strike by Caolan Lavery provided Rotherham with the victory over Rovers at the New York Stadium.

Heading into the encounter, Rovers boss Darrell Clarke included two changes to the side that drew at the Mem last weekend against Blackburn Rovers.

The changes came in the shape of Tom Nichols and Marc Bola, who were introduced to the starting eleven at the expense of Tom Broadbent and Lee Brown.

After the opening period of the game passed with both sides looking to control possession, the hosts broke the deadlock just as the opening ten minutes came to a close. Michael Smith managed to snatch possession off James Clarke in the middle of the pitch and advanced towards goal before lifting a finish into the top corner from the edge of the penalty box, with little Sam Slocombe could do to prevent the effort from nestling into the net.

Lifted by the early goal, Rotherham enjoyed a spell on top in the game, creating a series of half chances, as Will Vaulks deflected a corner from the right just wide of the target, after making a good connection with his first-time strike. 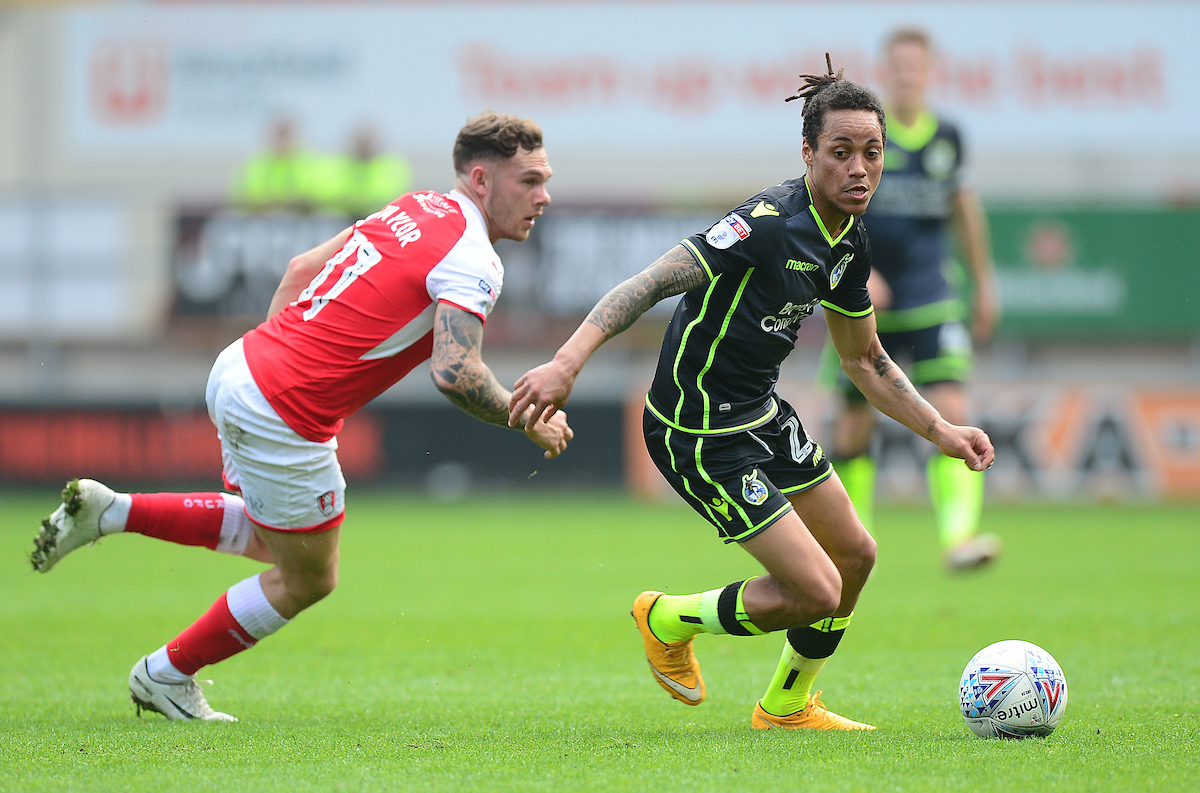 As the first half approached its conclusion, Rovers did rally chances on goal to level the scoreline heading into the break. A well-crafted ball from the right from Chris Lines reached Ellis Harrison at a comfortable height, as the striker leapt to divert a header towards the target, but Rodak was equal to the attempt in the Rotherham goal.

The opening exchanges of the second half, the home side had appeals for a penalty dismissed as Joe Newell fell to the ground after coming into contact with Tom Lockyer. Rovers responded with an attempt from range via Ollie Clarke that curled off target.

Clarke's chance was quickly succeeded by a smart piece of skill from Byron Moore, as the winger reacted the quickest to a loose ball in the final third. Moore ran with purpose towards the goal, as his winding run saw him advance toward the six-yard box and around the Rodak, who had mistimed a dive at Moore's feet to pounce on the ball. Just as Moore adjusted himself to shoot at goal, a number of Rotherham defenders threw themselves at his shot and smothered the attempt.

As the hour mark passed, Rovers continued to ask questions of the Rotherham defence. Ellis Harrison took the opportunity of both space and time to unleash a right-footed strike from just outside the area that flew narrowly wide of the Rotherham goal.

A double change was made by the Rovers bench, as Dom Telford and Bernard Mensah were introduced to aid Rovers in the search for an equaliser.

Telford almost made an immediate contribution, as the striker lost his marker inside the area and with his first touch, looked to glance a header towards goal, but his attempt bounced wide.

At the other end, Rovers still had to be alert from advances from Rotherham to extend their narrow advantage, as Sam Slocombe produced a fairly routine save to deny substitute Ryan Williams, who had managed to reach a low cross into the Rovers penalty area.

Inside the final ten minutes, Ollie Clarke elected to test his luck from range, as the midfielder dragged his driven effort the wrong side the upright from twenty-five yards.

There was a better chance yet to come from Rovers, as Dom Telford glanced a header into the path of Kyle Bennett. The winger had anticipated the flick and ran in behind the Rotherham defence, and did well to bring the ball down to settle at his feet, but his effort was held on the ground by Marek Rodak, who had made himself large narrow down Bennett's angle on goal.

Rotherham added the security of a second goal in final minute of the game, as substitute Caolan Lavery poked home from Joe Newell cross, as the home side claimed all three points.

Tickets our SkyBet League One fixture against Rotherham United will go off sale at 5pm on Thursday 19th April.

440 advance tickets have been sold for the fixture, with tickets available on the day for Rovers fans.

There will be a £2 increase for adult tickets for on the day sales. With the ticket prices listed below.

Concession tickets are classed as Seniors 60 and over, Young Adults 18-21, HM Armed Forces Personnel and students with valid proof of full-time education.


Tickets for our SkyBet League One fixture against Rotherham are still on General Sale.